I have seen Mr. Desquaine’s name spelled Dequaine equally. A commenter elsewhere yelled at me and wrote “Dequaine” so I’ll go with that.

I am very disappointed I never got to check out this museum. Is there anything more random than a museum dedicated to shaving and barbershops? I think not. The story of this place is ridiculous and sublime; and the guy responsible for it appears to be quite an eccentric. 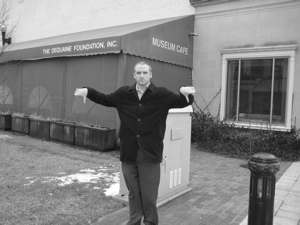 Lester Dequaine actually had three distinct museums under one roof of a rather handsome building in the heart of Meriden – right across from the Police Station smack-dab in the middle of Main Street. These places were open seven days a week at one point and… well… they weren’t exactly hotspots for some reason. (The other two museums were the Rosa Ponselle Museum and the Frank Chiarenza Museum of Glass – but you probably knew that already). 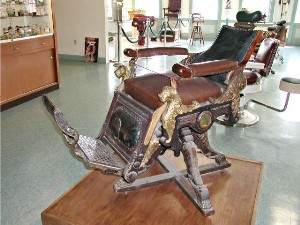 I’d have dug the barbershop one the most I think:

“Unusual shaving devices?” Seriously, what could they be? I’ll never know. *Sniff* 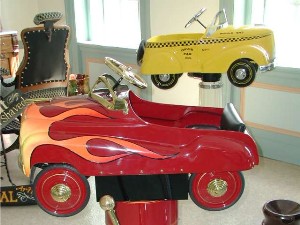 Damian would totally have enjoyed a fresh cut in these things!

It appears the museum collection pretty much went to auction. From an article about an auction in Allentown, PA:

The Saturday session features the contents of the remarkable Lester Dequaine barber-shop museum that once operated by appointment only in Meriden, Conn. “This collection covers every corner of an old-fashioned barber shop,” said Inman. Among the many barber chairs are four novelty kiddie chairs that incorporate an actual Garton pedal car; as well as an old oak example by Eclipse with decorative carved lion’s heads. Barber poles include four porcelain models with lights, globes and motion mechanism; and one early painted-wood pole. The most elaborate of the bar backs is of oak with marble backing, estimate $12,000-$15,000. 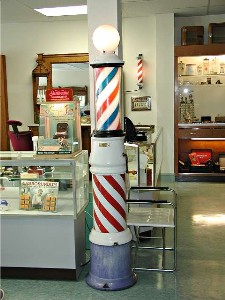 Additionally, there are floor-model shaving mirrors and stands, 100 different shaving mugs, cash registers, razors and product bottles, a National electric shoe-shine machine from the 1940s, and a variety of advertising signs of porcelain, tin and cardboard. Standouts within the advertising group include a mint-condition Baranger barber shop motion display, estimate $3,000-$5,000; and a Gem Razor die-cut cardboard motion display of a man shaving as he rocks back and forth and side to side, estimate $5,000-$7,000. “I’ve only seen one other like it,” said Inman. Also to be sold is an especially handsome double-steeple showcase with nickel trim, estimate $3,000-5,000.

So in other words, this guy’s museum/collection was fairly impressive to say the least. A handsome double-steeple showcase with nickel trim? Um, hello? I’d pay six-thousand to have that in my parlor room. Anyway, my “visit” was all of 2 minutes – some random people were in the empty building reviewing plans for whatever they are putting in. I was surprised there was a Cafe as well. With so many hundreds of other active museums to check out, why am I sad this one is gone? 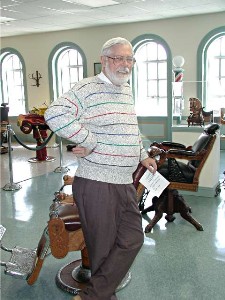 The man himself, Lester Dequaine!