Prior to this one, I’d only visited two other National Natural Landmarks. One was inside (Dinosaur Trackway in Rocky Hill) and the other has an extensive and well-maintained and documented trail system (McLean Game Refuge). This one, a swamp no less, would be different. 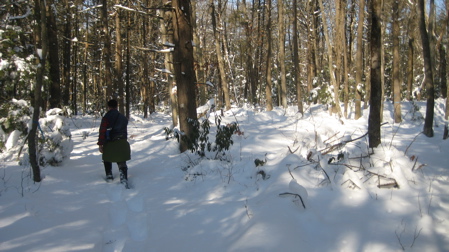 So I decided to call in the big gun. (Actually, he called on me about a year after I called on him, but that’s not important.) Trail maintainer Extraordinaire and all-around nice guy Rob Butterworth had recently moved near the southern border of the cedar swamp and offered to guide me deep into its bowels. Great! This was an offer I couldn’t refuse.

A cedar swamp is as swampy as swamps get. So I had a choice… Wait until the warmer months and get torn up by mosquitos whilst sinking up to my knees in muck – or venture into the swamp proper on top of two feet of freshly fallen snow? Once I’d made my mind up, which you can discern from the pictures, my wife asked, “Why would you go to see a swamp when it’s not swampy?” 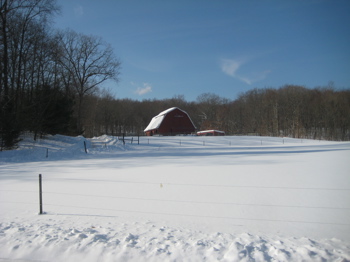 Hm. Good question. But really, I was there to see the cedar stand which just happened to be in a swamp (they usually are), so I’d see what I wanted to see and keep my feet dry – I was hoping. The day I drove down to Chester was simply beautiful; I couldn’t have been any luckier. I called up Rob and before I knew it, he was chugging up the impassable (to cars) dirt road to show me the way.

This was important because there are no marked trails through the Cockaponset State Forest to the swamp. There are a couple roads and some trails, but no official network. Rob had given me directions which included things like “large puddles” which, as you can see, didn’t really help me on January 15th after a blizzard. After the first quarter mile or so where 4×4’s had driven (or attempted to, as I had to help extract one guy in his Jeep), the snow was untouched. Yup, we’d be “breaking out the trail” as we say in the snowshoeing business. 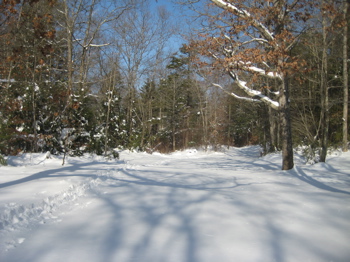 I have done this before, but never in 2+ feet of snow. And once off the road, we hit and trail and then bushwhacked a ways into the swamp. I used to race bikes for years and of course understood the dynamics of drafting and the energy saved. Let me tell you, being the second guy in a snowshoe line uses I’d guess at least 40% less energy than the guy in front. And if you’re 5th or further back? You might as well be walking down a dry road in May.

Trudging through unbroken snow is a singular, tiring experience. After about another quarter mile we turned off the road and onto a trail (I think) and then shortly thereafter turned north and began the bushwhack. Another great thing about snowshoeing areas that normal people don’t snowshoe? You can never get lost. Think about it. 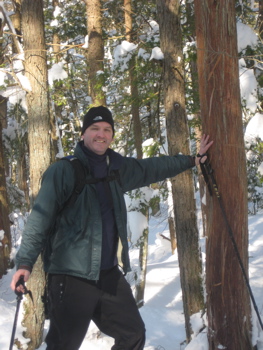 After a few minutes of poking around, we found some cedars. I just realized that there was “snow falling on cedars” but since I know nothing of that book, I can’t even make a joke. So we ducked and dipped and clambered and shimmied and never really saw a sweeping view of just cedar. (And Rob says such a thing doesn’t exist here anyway.) And that was that. We turned tail and followed our tracks back out to the road and then to my car.

Afterwards, we adjourned to the Butterworth estate and sipped on Irish coffees while warming our toes and recounting our adventure into the belly of one of Connecticut’s National Natural Landmarks. 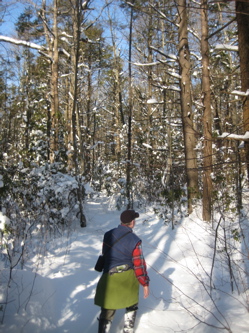 Oh yeah, I guess you want to know what makes this place so special? Well, the Chester Cedar Swamp is a wetland complex that contains relatively mature, second-growth forested swamp, a small pond, and bogland, bounded by upland forest. It is considered one of the finest Atlantic white cedar swamps in Connecticut. This extensive stand of Atlantic White Cedar, which has escaped logging in the past, is uncommon in Connecticut and particularly susceptible to stormwater runoff and impacts of development. 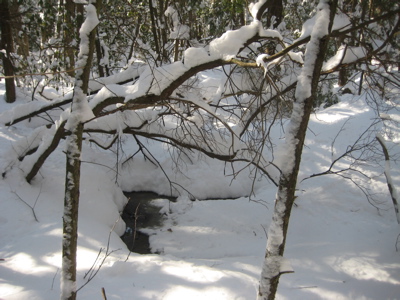 Why should we care about protecting this ecosystem? According to Jean Pillo, a DEEP Master Wildlife Conservationist volunteer and member of The New Roxbury Land Trust, the Atlantic White Cedar (Chamaecyparis thyoides) is only found within a narrow coastal belt 50 to 130 miles wide. Since it does not tolerate shade, it thrives only in open boggy areas. 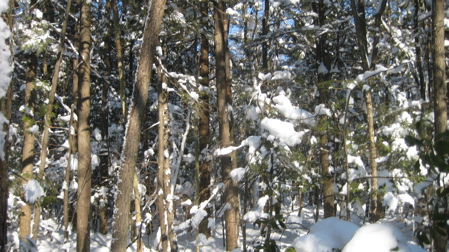 This unique habitat, which was once abundant, was largely lost as a result of logging and conversion of land to agriculture. The highly tannic wood was also favored by early colonists as a source of fence posts. Although swamps buffer surrounding communities from flooding by absorbing large amounts of rainwater and spring runoff, remaining unprotected swamps are threatened when development involves filling wetlands, or channeling excessive runoff into a swamp, which drowns the cedars. Atlantic white cedars are also sensitive to pollutants. 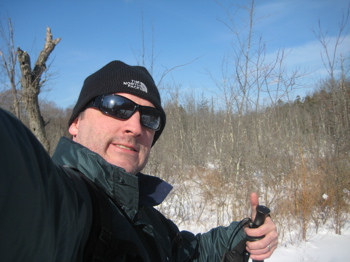