I do not like baseball. I never have and very most likely never will. It’s entirely too slow and too boring for my tastes. In fact, even though “my” team (the Philadelphia Phillies) has won a world series recently, I still haven’t watched an ENTIRE baseball game on tv in my life. So please take what follows for what it’s worth. 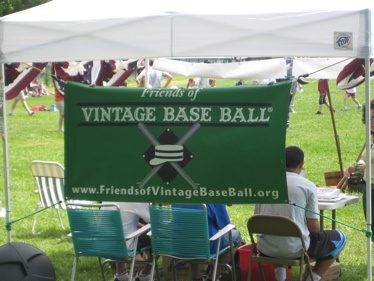 I think the idea of vintage baseball games and leagues is really, really cool. One could argue that baseball is cool because of its history. (One would still be wrong, but one could try.) I’d heard for a few years about this group in Hartford that stages these old-timey games and was actually pretty excited to attend a game.

Little did I know that old time baseball is ten times MORE boring than present day baseball. Yawn. It was so boring, in fact, that I only took a few pictures of the “game,” which appeared to me to be more of a costume party for middle-age guys throwing an old ball around. After about five minutes, Damian was off and running (actually tantruming if you must know) so we took him across the park to the playground.

While Damian is off being grumpy about swings and slides, let’s learn at least a little bit about this whole thing – which I’m SURE many people find very, very cool:

The Friends of Vintage Base Ball promotes living history by bringing the 19th century to life through vintage base ball. We provide cultural enrichment and education programs and activities to youth and adults. Our organization was formed in the late summer of 2008 in response to a need to create a permanent field for the play of vintage (19th century) base ball in Hartford, Connecticut. We partnered with Coalition to Strengthen the Sheldon/Charter Oak Neighborhood (CSS/CON) and the City of Hartford, Connecticut to designate a field of play in Colt Park for vintage base ball. The park is contained within the Coltsville district in Hartford, which has recently been named a National Historic Landmark and is on its way to becoming a National Park. (See CTMQ report on the designation here.)

The result is the Hartford Base Ball Grounds at Colt Meadows. Our 2009 season saw teams coming in from Massachusetts, New York, Rhode Island and Connecticut to play games at historic Colt Meadows. Admission is free and we invite one and all to join us in 2010. You provide the lawn chairs, blanket, picnic lunch and sunscreen – we’ll provide the fun!

See? Like I said, it all sounds wonderful. And I really do appreciate the nods to other important historical entities like Colt and Colt Park. This is the stuff I revel in and I thank the Friends of Vintage Base Ball folks for putting this stuff on their website: 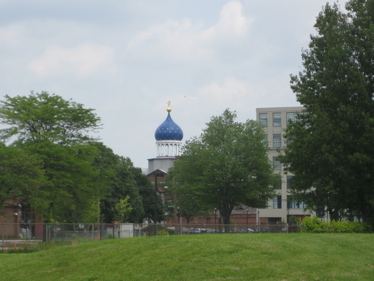 Local businesses and organizations organized base ball teams (‘nines’ in the parlance of the day). The Colt Armory/Factory team played from at least 1866 thorugh 1918 – often, in the early days, at ‘Colt’s Meadows’ and ‘the south meadows.’ The field is at the intersection of Curcombe Street and Hendricxsen Avenue across from Potsdam Village, built by Samuel Colt in 1858 to house the workers he convinced to move to Hartford from their native Germany to man his willow-ware factory.

As seen in the photo below (c1860 and lifted from the Friends’ site), what we now call Colt Meadows was once a cow pasture on the Colt estate. The Potsdam Village homes can be seen in the background, along with Sam Colt’s willow-ware factory. It is also very near to where base ball was played in the 1860s and 70s on land owned by Elizabeth Colt, who graciously allowed a base ball stadium to be built adjacent to the Church of the Good Shepherd.

Morgan Bulkeley (First president of Aetna, has a big bridge named after him, commissioner of baseball) formed the Hartford Base Ball Club in the American Association and leased the grounds adjacent to the Church of the Good Shepherd from Elizabeth Colt to build the Hartford Base Ball Grounds in 1874. The ball park was enclosed with an eight-foot-high wooden fence and measured about 400 feet by 500 feet. A pavilion with seating for 500 stockholders and season ticket holders was built behind home plate, which abutted Wyllys Street. Tiered bleachers for 500 more general admission spectators were built along the first base foul line with additional seating planned, if required. In May, 350 additional seats were added on the third-base side of the diamond and were reserved exclusively for ladies and the gentlemen accompanying them. Hendricxsen Avenue ran on the other side of the fence behind these stands. More seats may have subsequently been added as it was reported later in the season that seating capacity was 2,000 spectators. 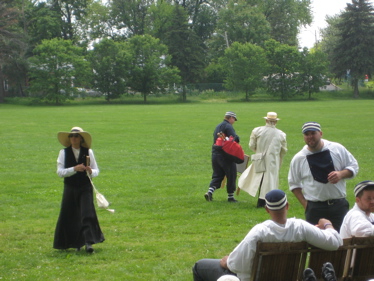 Now that the whole Colt district is a NHL and is being looked at as a future National Park, the base ball people are hoping to recreate a period grandstand and all that good stuff. I wish them luck as it would be pretty darn cool to tie in the leisure of the day with the work done over at the arms factory and the mansion the Colts lived in.

All this stuff wrapped up together here is what makes it interesting to me. But for those of you who want to know more about the base ball itself, here you are:

Vintage base ball is a re-creation of the 19th century game as living history through sport. First played in 1980, it has grown tremendously across America and Canada. There are today almost 300 men’s and women’s vintage base ball teams in existence, as well as organizations that promote the game. It educates people as to the origins of our national pastime as well as showcases the early rules and customs of the sport, which stress honor, sportsmanship, gentlemanly conduct and community pride. It is welcomed by spectators as a breath of fresh air from the commercialism and aggression of modern sports. As such, it is considered a genuine family activity.

There are typically two distinct eras represented by vintage base ball clubs — Civil War era and post-Civil War. The first play by 1860s rules and the latter by 1880s rules. For more information on the game, visit Eric Miklich’s comprehensive website.

Although we went for some old fashioned baseball, we ended up playing on a nearby playground, checking out Armsmear from afar and poking around the kooky religious shrine up on Wawarme Avenue instead (Read about that nonsense here). However, for baseball fans, it looked like a pretty fun time and all the vendors (old time photos, bats, clothes, etc) made it rather festive.

Friends of Vintage Base Ball