Colony Has Spawned a Colony of Followers
Colony Grill, Stamford

This is a tough one.

I so want to love Colony. One of my bestest friends in the whole wide world can’t say enough positive things about Colony. She has lived her whole life in Stamford and Colony is her main source of Stamford pride. She – Caroline for those who follow her sporadic CTMQ exploits – had told Hoang and I a hilarious story once about her brother-in-law’s unhealthy obsession with Colony’s pizza. I was so down for one of their slightly-bigger-than-personal size hot oil pizzas after a full day of Fairfield County museum-going, I navigated the awful traffic just off of I-95, found a parking spot right in front (apparently a huge stroke of luck), stepped around the derelicts who prowl the area, and entered the bar. 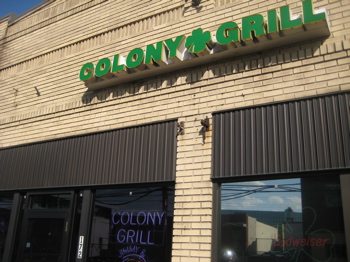 Psst, it’s a dive bar. Which is FINE with me. I love a good dive bar. In fact, with a nod to Anthony Bourdain, I’d like to only frequent bars that have draft beer in small glasses on offer. That’s the mark of a good bar. Anyway, awesome pizza is not usually a mark of a good bar. But hey, Colony has a rabid following… And rabid followings can never be wrong, can they? 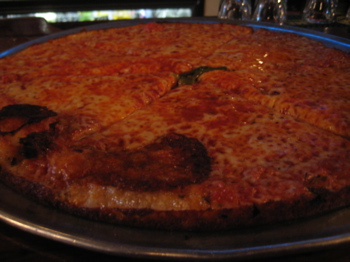 The Colony hot oil pizza is a different kind of pie. Yes, it’s thin crust as every pie on the Roadfood list is, but these pies are wicked, wicked thin. And there’s only one size (which is a nice size for a normal sized hungry guy) and limited options. They make nothing other than these cheap pizzas here… And they say they never will. I’ll let the pro explain the hot oil pizza properly…

Pizza at the Colony Grill is unique. It is thin-crusted, thinner even than the Neapolitan-style pizzerias of New Haven; and it is brittle. Regardless of the ingredients on top, each triangular slice can be lifted by its broad end from the circumference of the pie and the pointy end of the slice will remain on the same plane as the rest. There is real character to this crust, and at the outermost edge, a luscious crunch unlike any other pizza you will eat.

As for toppings, the usual repertoire is available, including clumps of excellent locally-made sausage; but Colony connoisseurs frequently get what is known here as a Hot Oil pizza. Hot oil — “hot” meaning spicy — is drizzled over everything and seems to bake right into the crust, giving every crunchy bite a zest that is not merely fiery, but brilliantly pepper-flavored. We love the hot oil with sausage, or with wide discs of pepperoni.

Pizzas are served on metal trays. There is only one size, about enough for one very healthy appetite. Pizza is the extent of the Colony Grill menu, other than drinks. This place is a local tavern, featuring a long bar along one side of the room that you enter off Myrtle Avenue; and while it is famous for pizza, many customers come for shots and/or beers. We sat there during lunch hour and watched at least a dozen customers go to the back for take-out orders ranging from one to eighteen pizzas

Hm. Not the usual enthusiasm from a Roadfood review. In fact, a third of it was about the establishment rather than the food… I’m guessing as a way to “warn” newbies that this isn’t exactly a pizza restaurant at all, but rather just a bar that happens have a good thing going. 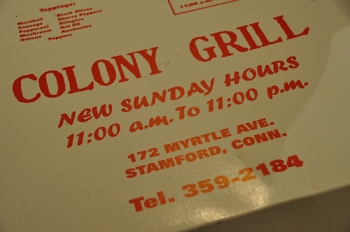 My visit was pleasant; my crappy beer was cold and my pizza came out pretty quickly. The locals at the bar with me were not off-putting and the place didn’t seem all that dirty or anything. But… but… it kills me to say it, because Caroline so loves this place… But Colony simply doesn’t deserve to be on any “Best of” lists. It just doesn’t. I’m going to totally cop out here and lift a great review from a blog called Stamford Pizza Tour. Not only is their review funny, I tend to agree with it. (Plus, now when Caroline reads this and wants to kill me, I can say, “hey man, I didn’t write all that stuff! Especially the first line about the ‘rabid obnoxious fans’!” I’m no dummie.)

When we first started the Pizza Tour, many of this restaurant’s rabid, obnoxious fans assured us that Colony Grill was the uncrowned champion and that we were wasting our time searching for Stamford’s second-best. We’ve been told for months that we were unfit to judge any places in Stamford without having been to this cathedral of hot oil and cold beer, for Colony is the measuring stick with which to judge not only pizza, but ethics, morals, and the sins of man. While that’s all up for question, there’s no denying that Colony Grill is a veritable icon of Stamford, CT, and we’re here to find out why. 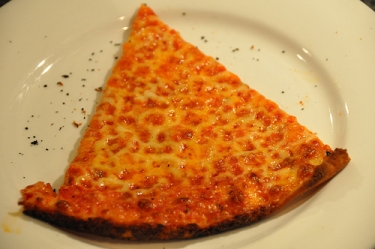 Establishment. Colony Grill is a glorified dive bar and anyone who tells you different is an outright liar. In its heyday, Colony forced its patrons to stakeout their would-be tables in a cutthroat war for the next available booth, refused to distribute restaurant necessities such as menus and plates, proudly let the phone ring when they were just too damn busy to bother answering it, and took no less than 45 minutes to complete an order, no matter how big or small it was. They did all of this with the warmth and friendliness of Timothy McVeigh. While Colony has evolved ever so slightly from its bizarre, unfriendly (and oddly charming) beginnings, they’re more or less the same. Sure, the renovated bathroom/waiting room area no longer resembles something out of Saw IV, and sure, their new waiting list no longer perpetuates the free-for-all sprint for a table, and sure, menus (if you can call a list of toppings and a bunch of drinks a menu) are now generously located at all of the tables, but Colony still screams, “dive!” Now, this can all be either interpreted as fascinating local charm or as repulsive, off-putting, local dickery. We are inclined to think the latter of Colony Grill.

Pizza. Fortunately for Colony, this is where they get away with being as annoying and unbecoming a “restaurant” as they are. The pizza’s good. Colony’s crust is so thin that you’ll be baffled as to why it takes so damn long to hit the table. Regardless, this crust is dense, chewy, crispy (try and explain those last two), and the main contributor to the unique Colony flavor that you have to taste to understand. However, Colony’s sauce and cheese are nothing short of boring. While cooked to perfection and very well proportioned, the cheese is largely flavorless, as is the sauce. However, no self-respecting Stamforder (Stamfordian? Stamfordite?) will ever recommend a plain pizza from Colony, as their toppings truly stand out. Our toppings of choice were Colony’s famed hot oil and sausage and while there were only but six hearty chunks of local Deyulio’s sausage topping a pie pockmarked with hot oil bubbles boiling up through the cheese, they absolutely made this pie. This should be no surprise, but Colony’s ultra thin pizza loses its magic when it cools down and being as thin as it is, it sure cools fast and really caters to voracious thin crust lovers that can house a pie in ten minutes or so. If you’re one of those people, Colony won’t disappoint.

Phew. I’m SO glad I didn’t write that. (Psst, awesome job StamfordPizzaTour guy.) My main issue was what he said: the cheese and the tomato sauce were uninspired and bland. Cripes, without the hot oil, which really wasn’t all that hot, a plain cheese pizza from Colony would be barely better than Elio’s.

There, I said it.

By the way Roadfood, one of these days you’d be well served to get up out of Fairfield and New Haven Counties to try some of what the rest of the state has to offer.

You see what I did at the end here? It’s called “deflection;” changing the subject away from a slightly negative review. Nice work, Wood, nice work. 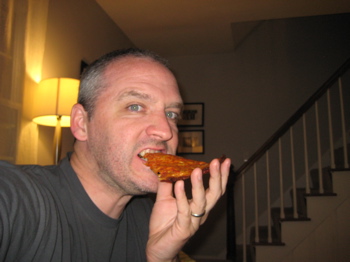