It’s time to begin hiking Ridgefield. After all, the tony town is “on notice” in 2017 as one of my towns to “complete.” Should be a breeze… I mean, who has ever heard of hiking in Ridgefield? Let’s just go grab a list of trailed places and… 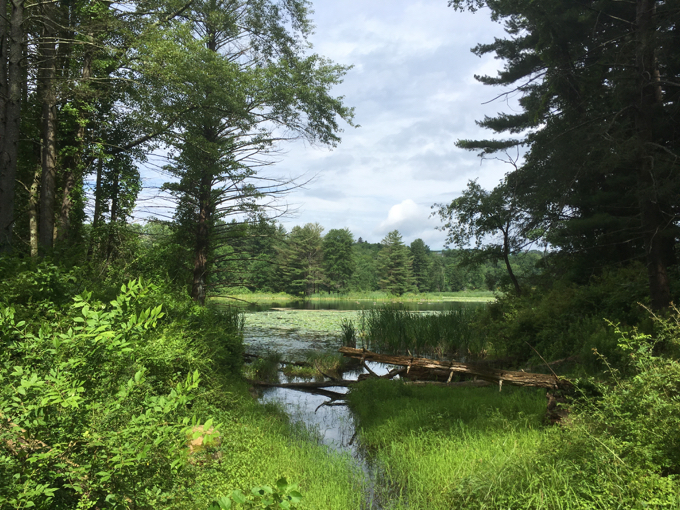 With just short of one billion* trailed properties in town, this is going to be a bit of a challenge! Not that any of the hikes are difficult or long, but Ridgefield is not exactly close to my house in West Hartford. 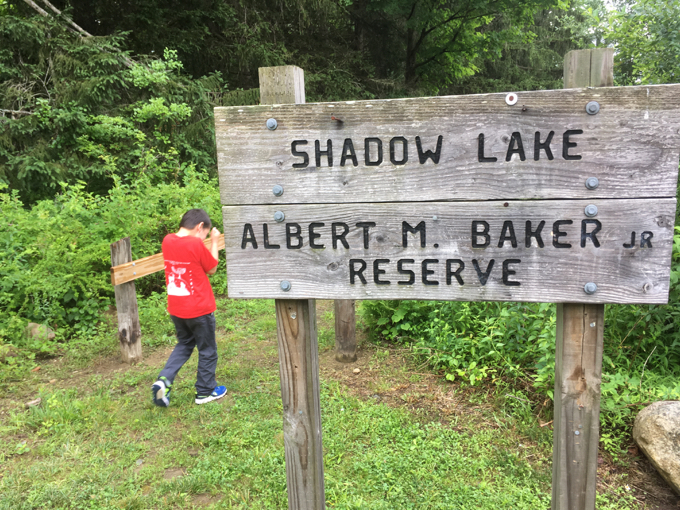 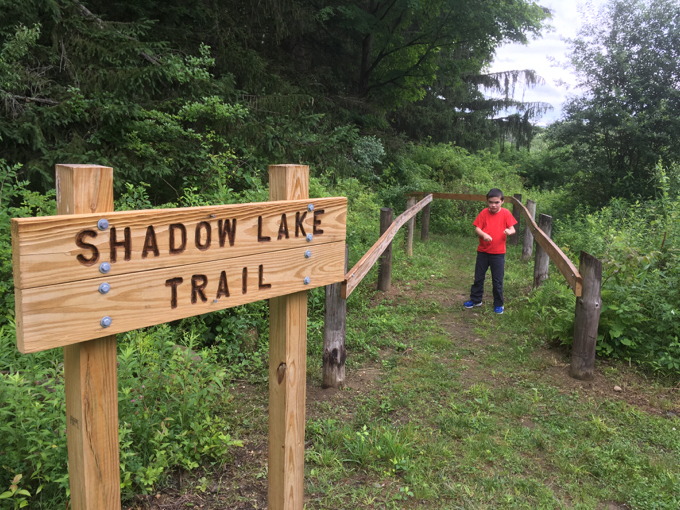 Shadow Lake is on Ridgefield’s northern border with Danbury. There is a large parking lot for the little league baseball field there. As you travel down Shadow Lake Road, you’ll notice a large barbed wire fence along its entire length. 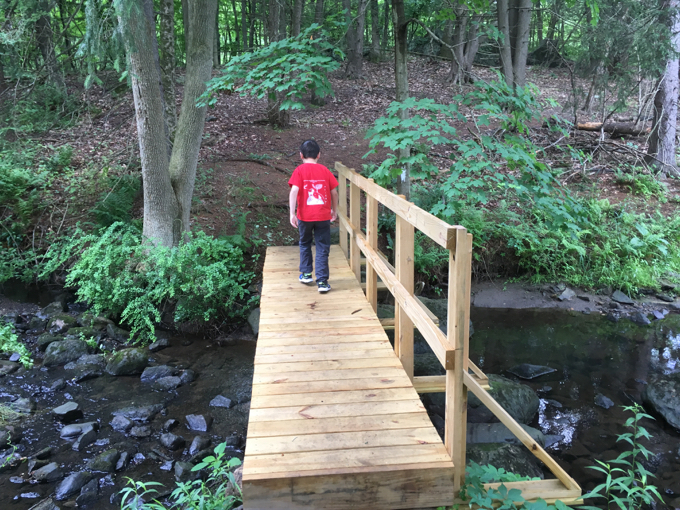 That fence protects Boehringer Ingelheim, a massive international pharmaceutical maker. Thought I’d mention this as it may surprise some people that they have a massive presence in the hills of southern Danbury. This hike is in the shadow of the looming “Big Pharma” building.

I was curious as to how a wealthy town like Ridgefield would care for their trails. Especially with having so many. In short: Very, very well. The bridges here are well-built and the trail itself is pristine. 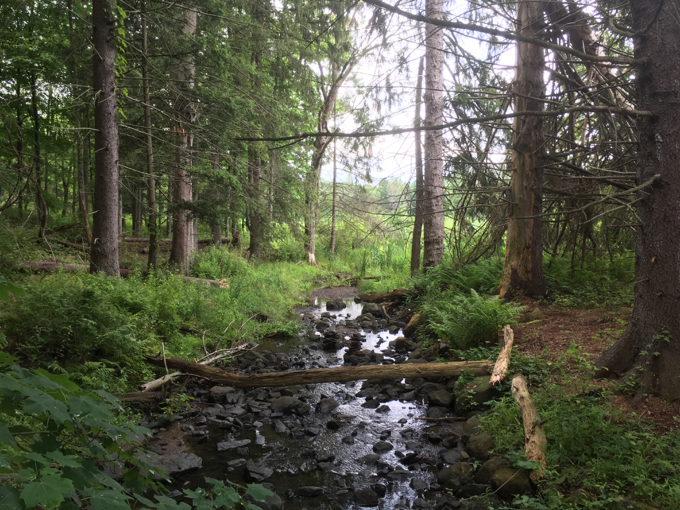 In fact, it appeared to have been recently mowed. All. The. Way. Around. The. Pond.

There is nice new signage at the trailhead and from what I understand, a relatively new bridge across the brook. (Previously, the trail spit you out onto the road for a 100-yard roadwalk. Good on you, Ridgefield, for correcting that problem. 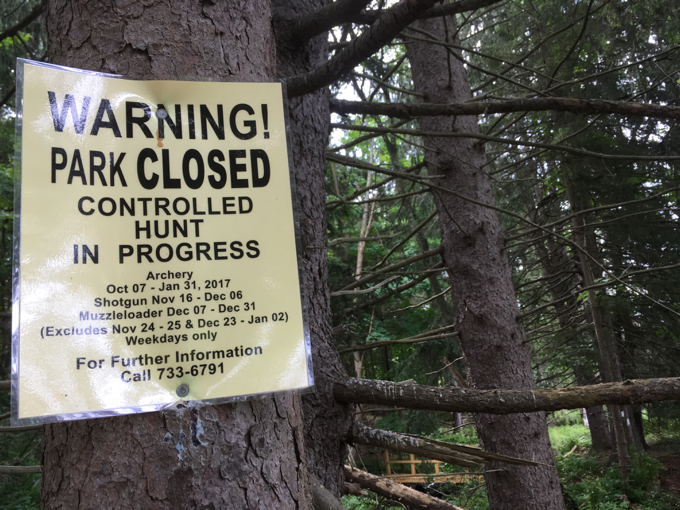 This terribly worded sign is for specific dates, none of which are in June. We bumbled on into the woods. The trail circumnavigates Shadow Lake and hugs its shore almost the entire way. 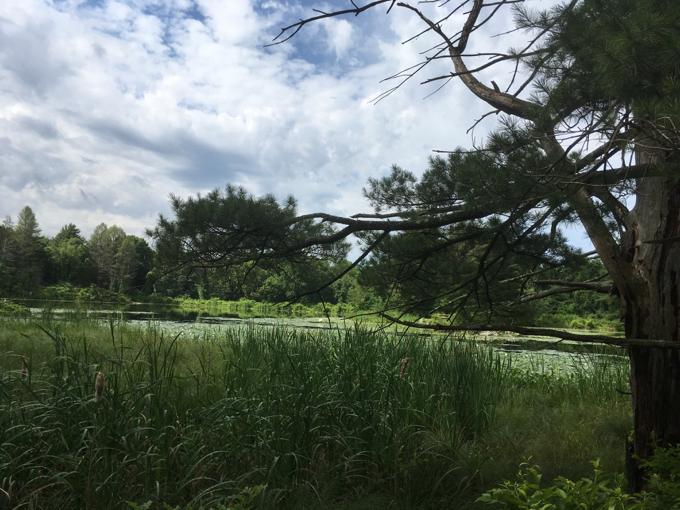 A regal swan floated in the middle of Shadow Lake and watched our progress the entire time we were on the trail. The entire trail is flat, blazed, and as I mentioned, very well cleared. (I can see that the meadow area on the western side of the lake could get dicey without constant upkeep, however.) 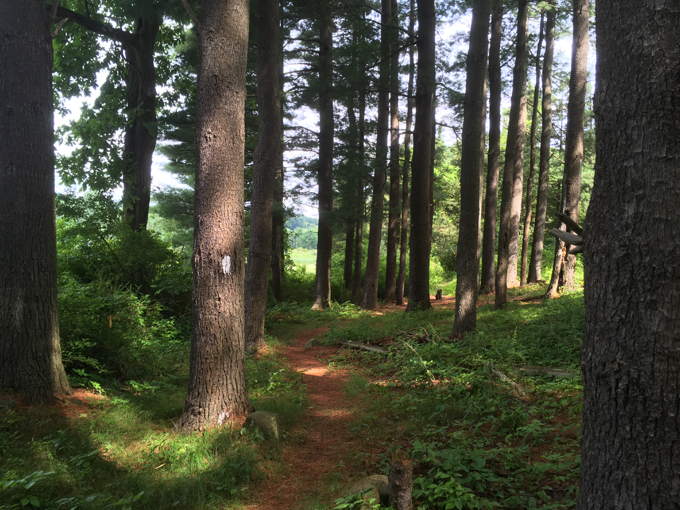 As we passed through a nice pine stand and began the walk back towards the car, 2 flying animals made their presence known.

First a rather large pileated woodpecker flew right over our heads. We’d heard him earlier, but seeing these birds is always a treat. They are much bigger than the usual downy woodpeckers that we see rather frequently. 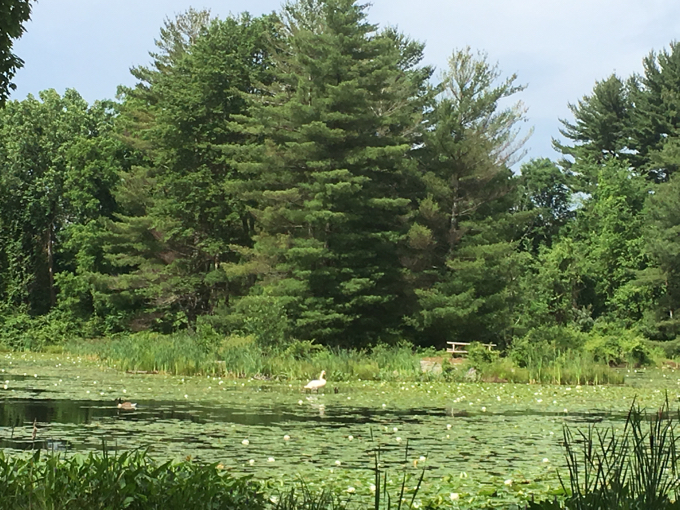 Then the deer flies attacked. I’m not one to be bothered by biting bugs. Mosquitos generally leave me alone and I try to leave black flies alone – by avoiding their swarms up north. Deer flies are beyond annoying, but usually take a while to get a good bite going. 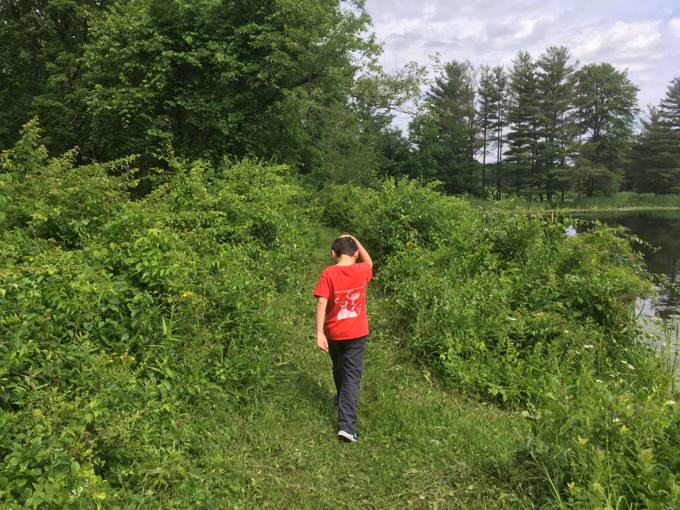 Damian, however, is a different story. He’ll just mosey along, let them alight upon his juicy neck, and just leave them there. I’m not sure if it’s his limited pain receptors, his tolerance to pain, his abject laziness, or his complete unawareness of the world, but he makes it tough to hike with biting insects. 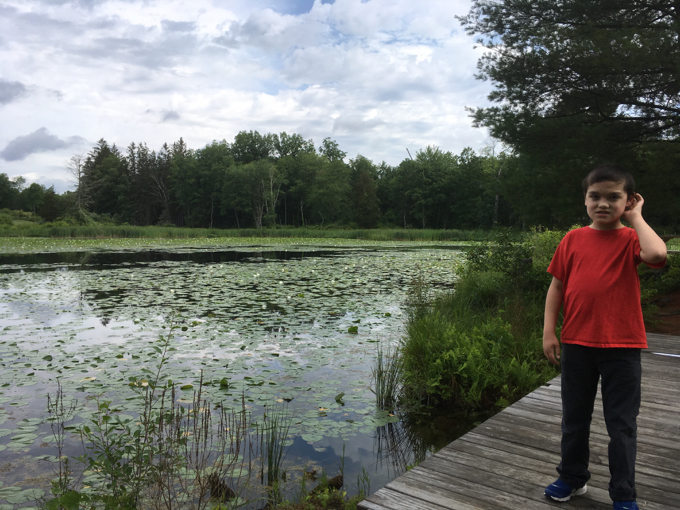 I taught him to continually sweep his hair and neck – and he actually complied. You can see him doing so in a few of the pictures. Yet, every time I looked at his head, there would be two or three deer flies sitting on him. Oh well. 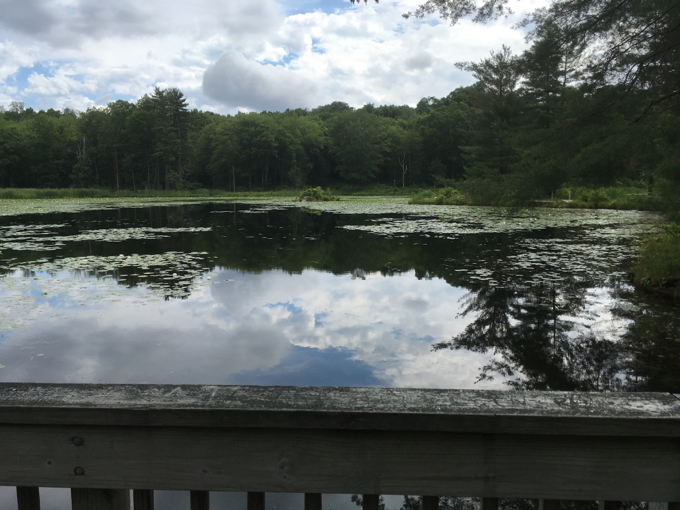 There is a spit of land here that juts out into the lake. There are two picnic tables here but with the deer fly situation, having lunch there would be torture at this time of year. Otherwise, it’s quite lovely.

And this ol’ painted turtle mama thinks so too. 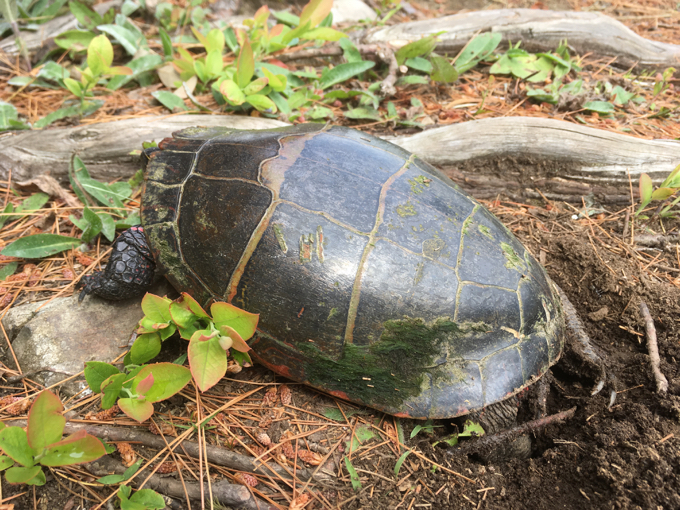 Raising a family in Ridgefield, if you can afford it, is ideal. Well done Mama Turtle.

The remainder of the hike was through a mowed meadow and then around the baseball field. My introduction to Ridgefield hiking was a resounding success. 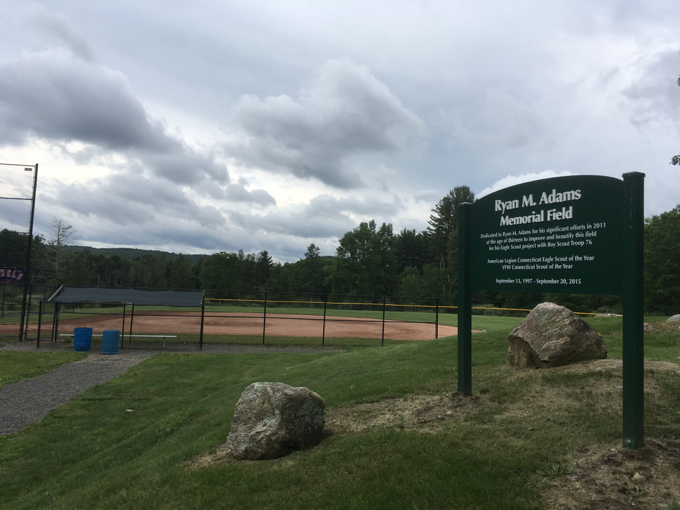 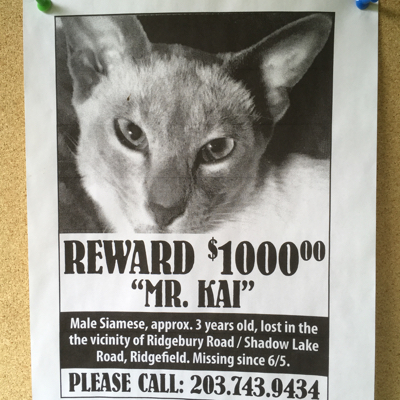 Ridgefield cats are worth more than your cat.