You Sho Yoan, I’ll Sho You Mine
Shoyoan Teien (Japanese Garden at the Mansfield Freeman Center), Middletown
May 15, 2011

I’m in the midst of writing up a few of the “official” Historic Gardens of Connecticut, but couldn’t resist doing a page on another, newer – and arguably cooler – garden I’ve recently visited. 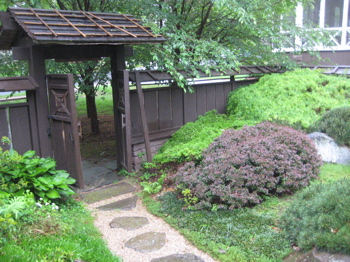 I love this little garden. I’m not sure if they refer to it as an Asian Garden or a Japanese Garden, but it is tucked in a little nook behind the Mansfield Freeman Center for East Asian Studies at Wesleyan. All I know it that it’s beautiful… Even in a monsoon.

I first viewed the garden through the windows of the Center while I was there to view the small but excellent gallery. As with all good Japanese gardens, it was compact and looked simple but certainly wasn’t. I would love to do this to my yard – my FRONT yard and I’ve already sort of started over the last few years. What was once a bland grass and pachysandra American yard now contains a stone garden, a Japanese cut-leaf maple, a Japanese Umbrella pine and some other small mugo pines that I hope to sculpt into uniform mounds. 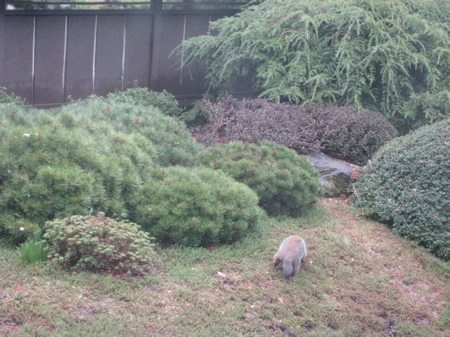 Stupid groundhog munching along on my first visit

But for now, I just like to look at professional gardens and dream.

The garden isn’t open for strolling normally, but every once in a while it’s open for a more intimate look. Wesleyan doesn’t exactly promote these days and times; it’s pretty much when the master gardener is there working. Through CTMQ-diligence and persistence, I finally got confirmation when I could visit and plans were set.

I arrived in an absolute downpour, but the gate was open and I said “what the heck, let’s go check it out anyway.” I’m very glad I did, especially since this place is so rarely open. 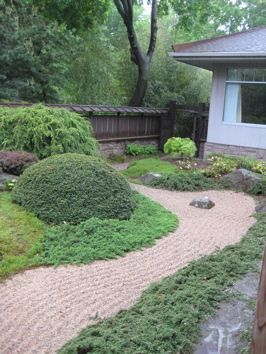 I met Steven Morrell, the guy hired to put this whole thing together back in 1995. He didn’t seem to even notice the sheets of rain pelting us while we talked about cotoneaster horizontalis, yellow-groove bamboo and mugo pine. I’ve reached the point where I can have actual conversations about this stuff with experts.

But I’m no expert. This was illustrated off the bat as I entered the garden and began walking up to Mr. Morrell on the groomed stone path. “DON’T WALK ON THE PATH!” he shouted over the driving rain.

This path is for contemplation, not for walking. Silly me. I scrambled up the sculpted little hillock and watched him awkwardly scramble amidst the low-lying evergreens to get closer to me. We then talked for a good 20 minutes about the various plants and the relative merits – and demerits – of bamboo. It was a good talk. 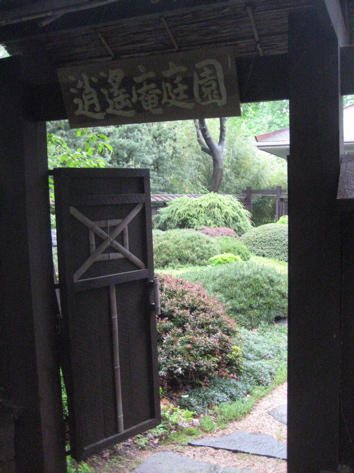 But since I can’t give you the history of this place, I’ll allow some guy named Tom Lynch at Wesleyan to do so (which I picked up from this Japanese garden website):

Shoyoan was built in 1987 through the generosity of Mansfield Freeman, a graduate of Wesleyan University in 1916, whose endowment established the Mansfield Freeman Center for East Asian Studies. The garden was constructed in 1995, with further gifts from the Freeman family and the encouragement of Mr. Freeman’s son, Houghton Freeman. Planned from the start as an educational resource, the ensemble provides a tangible means of experiencing Japanese aesthetics and exploring the cultural values that these spaces embody. The room and garden are actively used for a wide variety of purposes, ranging from meetings of small classes and Japanese tea ceremonies to quiet contemplation and meditation.

Okay, so I think “Shoyoan” is the little viewing room above the garden and “Teien” is the garden?

Shoyoan received a Green Dove Award from Common Boundary, a Bethesda, Maryland-based organization dedicated to “exploring psychology, spirituality, and creativity.” In making the award, Common Boundary said the garden “stood out for its sheer beauty” and the way it “addresses the interface of ecology, psychology, and spirituality by exploring the relationship between humans and our natural environment.

Now, normally I’d scoff at such platitudes. But I totally saw that here! The Connecticut River, the hills… All that stuff. Like I said, it was cool. And I didn’t realize at the time how accomplished the decidedly lowkey Mr. Morrell was while I was yapping with him in the rain.

The Freeman garden was designed and built in summer 1995 by Steven A. Morrell, a landscape architect specializing in Japanese-style gardens. His earlier public projects have included meditation gardens for Zen Mountain Monastery in Mount Tremper, New York, and Omega Institute in Rhinebeck, New York, as well as a tea garden exhibition for the New York Japan Society. Since 1981, he has been Curator of the John P. Humes Japanese Stroll Garden in Mill Neck, New York.

Shoyoan Teien falls within the tradition of the viewing garden, one intended primarily for contemplative viewing from within an adjoining room or from a veranda or bench just outside. Unlike the more expansive strolling garden, which presupposes a moving viewer and sequential experience of shifting views, an intimately scaled courtyard garden like Shoyoan Teien is designed to disclose its full panorama to a stationary visitor seated at its edge. The tradition of the viewing garden has a long history in Japan, attaining its classic formulation in the fifteenth- and sixteenth-century gardens of such Zen monasteries as Ryoanji and Daitokuji in Kyoto.

Shoyoan Teien embodies the aesthetic of the “dry-landscape” (karesansui),which centers on the use of suggestively laid courses of gravel to evoke a sense of water, flowing through raked patterns of ripples and waves. As is often the case in Japanese gardens, the landscape is not a completely idealized one, but contains a number of forms that allude to prominent features of the local environment. Here, the turning course of the raked gravel is meant to evoke the bend in the Connecticut River as it flows through Middletown, while the undulating clusters of Mugo pine on the farther bank suggest the gently rolling hills of the region. Similarly, the stone used in the garden is brownstone, salvaged from the old brownstone quarries across the river in Portland.

Okay, so that’s why I couldn’t step on the path. Because it’s NOT a path! I learn something every day.

This place is just flat-out cool. Now, I did ask how many of the plants here were native to Connecticut and after a longish pause, I was directed to a small little laurel in the back corner. That’s about it. Mr. Morrell was quick to note that “that’s what they wanted,” just like the bamboo grove which I got the feeling he hated. (I liked it and it served as a perfect natural screen from the dilapidated garage next door.) 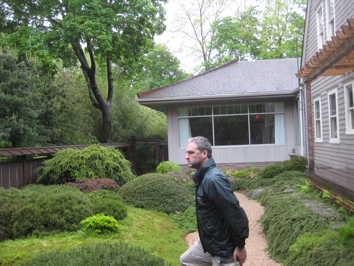 So that’s something to overcome: Those of us who care about having native plants but who love the aesthetics of these types of gardens have to sort that out in our heads.

But as for normal people like you, you can just enjoy my rainy pictures.