I recently posted a poll on the CTMQ Facebook page (which, if you’re reading this, you really, really should be a fan of here by “liking” it) asking people what they liked most about CTMQ. After a day, only ONE person chose “the completely random stuff.” Well, I think that may have been MY personal choice. But as a professional researcher (for the insurance and financial industries), I could not vote on my own poll in good conscience. 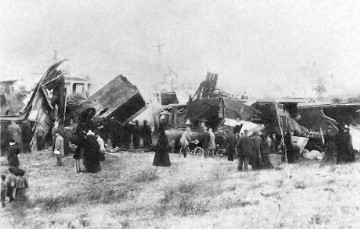 Both black and white photos are very real and true, courtesy of [a site that is no longer operational – 2018]. 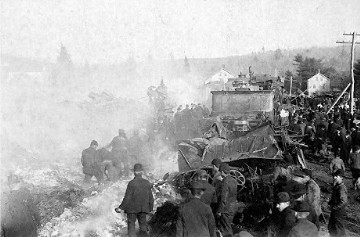 Not only do I think it’s compelling – I can’t believe I’ve yet to mention that this is the site of THE ONLY TRAIN CRASH INVOLVING FOUR TRAINS IN THE HISTORY OF RAILROADING IN THE UNITED STATES – but it’s also super easy for me to write about – because I don’t really have to write anything at all. Rather, there are several other people in this world who find this subject interesting enough to have done all that writing stuff for me. And so, without further ado, I present to you the Great East Thompson Train Wreck of 1891.

(I regret mightily that I forgot to pack four little trains from my son’s toys before my trip for illustrative purposes. I even mulled over buying a few in Boston, but my cheapness and laziness got in the way of that.)

I have a choice of where to copy and paste from… I like the tone of this guy Chuck Straub’s page about it but he and I disagree about some other things he’s written on his other pages. So I’m going with some online magazine named Environmental Graffiti who got most of their article from Mr. Straub anyway. Mr. Straub did a good job with this mess and I appreciate it. 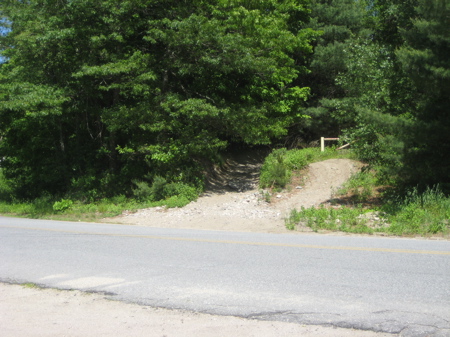 Here’s where it all went down. Right here; at E. Thompson Road and New Road in Thompson.

Shortly after dawn on the foggy morning of December 4, 1891, East Thompson, Connecticut witnessed the only four-train train wreck in the history of the United States. [CTMQ Notes: I TOLD you this was crazy!] Within a matter of minutes, two freight trains collided head on, and then a third passenger train smashed into the debris of that wreck. Unbelievably, a fourth passenger train soon arrived and slammed into debris of the three previous train collisions. Incredible! Here is the story.

Putnam, Connecticut was a major station for the New York and New England Railroad (NY & NE RR) in the late 19th century. Early on a fateful December day in 1891, the Long Island and Eastern States Express arrived from Hartford with a request to change engines and set aside a troublesome locomotive for the remainder of the trip to Boston, Massachusetts. Engine #105 would be the new locomotive. It was the pride of Harry Tabor, a well known experienced engineer who had planned to give up this run in two weeks hence, because the “fearful speed” made him nervous and uncomfortable. Gerald Fitzgerald was his fireman. The third member of the crew took himself off the roster at the last minute. Mike Flynn had a premonition of disaster and was now afraid to make the trip to Boston. 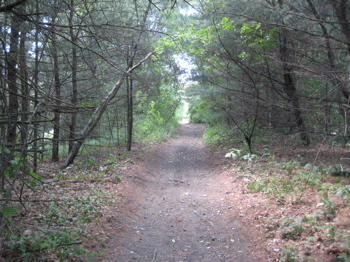 [CTMQ notes: Ugh. Selective sampling at its worst. I hate this stuff.]

Speed was of great importance to the NY & NE RR, which advertised fast and efficient train service. As dawn approached on December 4th, the dispatcher at Putnam had three trains to organize for trips to Boston. The Norwich Steamboat Express passenger train, with Ed Hurley engineer and Will Loudon fireman, carried 75 passengers. It was running late because the steamboat from New York City had been late. The third train was Express Freight #212 with 11 cars, crewed by Harry Wildes engineer and Jacob Boyce fireman. 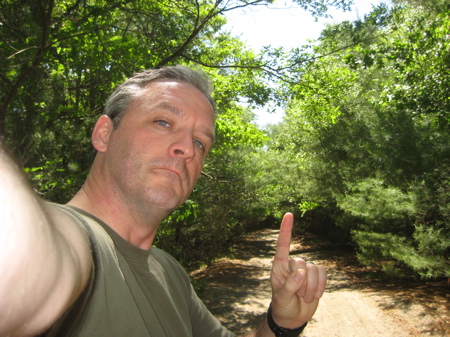 One train rumbling along… No worries

The Putnam dispatcher decided that the Long Island and Easter States Express would take eastbound track #2, soon after the new engine was ready to go. Express Freight #212 would leave ahead of the passenger train on westbound track #1 to East Douglas, Massachusetts. The freight train would then be switched to eastbound track #2 for the trip to Boston. After the usual stop in Putnam, the Norwich Steamboat Express train would head for Boston at the highest speed possible. The huge problem with this plan was that apparently, the dispatcher forgot about the local Southbridge Freight sitting on the tracks in East Thompson, Connecticut. 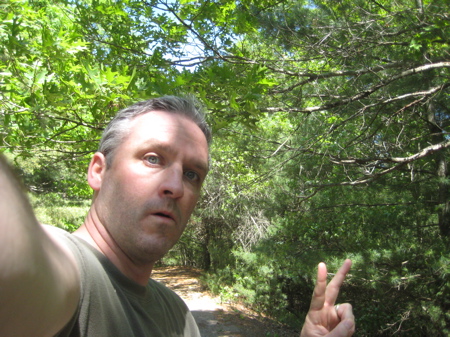 Engineer Joe Page moved the Southbridge Freight Local with an 8 car train onto the main line of track #1 at East Thompson, Connecticut. About 6:30 AM, Page and his crew heard a distant train whistle which they thought was the Long Island and Eastern States Express running late. A second whistle was quickly followed by the yellow glow of the engine headlight as the Express Freight #212 rounded the curve and bore down on the Southbridge Freight. Page and his fireman jumped from their train moments before the collision. Most of the cars on the local Southbridge Freight jackknifed and burst into flames. 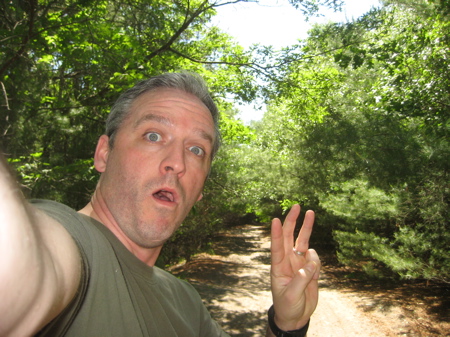 Harry Tabor and Gerald Fitzgerald, engineer and fireman on the Long Island and Eastern States Express, were not aware of the collision that had occurred a short distance ahead of their train. As required, Tabor was increasing the speed of his engine and the Long Island and Eastern States Express collided with the wreckage on the track at 50 mph. The engine derailed, turned 180 degrees and plowed into the dirt.

A red hot poker went through fireman Gerry Fitzgerald and he must have died instantly.

[CTMQ Note: I got that one right!]

His watch was later found, stopped at 6:47 AM. The quick-thinking conductor Frank Jennison saved many lives by turning off the valves for the gas lighting as he crawled out of the wreckage. Jolted passengers stumbled out of the Pullman sleeping cars into a cold, misty dawn.

[Phew. Glad that mess is over. Now we can get back to… Oh snap! What about the Norwich Steamboat Express train!] 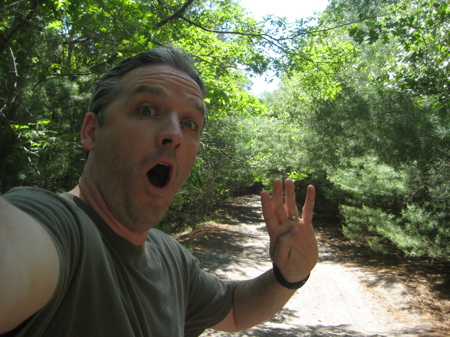 Finally, someone remembered the Norwich Steamboat Express train and a flagman was sent down the track to warn them. He was too late and this express passenger train rounded the curve and plowed into the rear of the Long Island and Eastern States Express. Their engine and sleeper car burst into flames. Incredibly, the engineer Ed Hurley and fireman Will Loudon survived with bad cuts and bruises.

About 500 feet of burnt out, twisted wreckage and debris now covered the tracks. Stunned and bewildered, the residents of East Thompson were photographed as they surveyed a frightening pile up of smashed engines and cars. The East Thompson station agent telegraphed for help and by mid-morning three wreck trains had arrived. Fires were quickly put out and the wreckage removed. Amazingly, there were only three fatalities amidst this four-train collision nightmare including one passenger never found but believed killed in a passenger car fire. East Thompson, Connecticut had entered the record books of American railroad history. 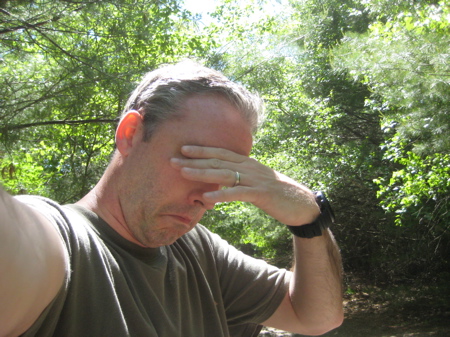 I can’t bear to read anymore…

And there you have it. I told you – crazy, right? Now if only I’d remembered those little toy trains to really make my pictures pop. Oh well, you get the point – of the red hot poker.

Yeah, I had an awesome afternoon in East Thompson. How many people can say that? The only thing better would be to hang out with Gomez Addams: