CTMQ > Everything Else > Superlatives > Site of World’s First Pay Phone

I’m Writing This on my Phone
Site of First Pay Phone in US, Hartford
Southeast Corner of Main and State Streets

I’m at a payphone trying to call home
All of my change I spent on you
Where have the times gone
Baby it’s all wrong, where are the plans we made for two?

Perhaps Hartford. The hyperlocal bloggers over at Sad City Hartford have found 40 payphones in our fair capital city. I’m not confident there are many more. 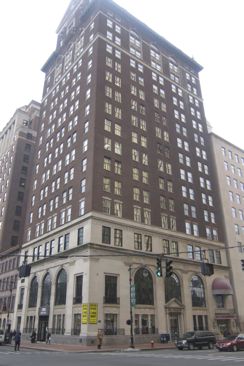 Every state and city has some weird claims of being first with something. Connecticut has a ton, of course, being an old state and all. I have become rather enamored with our Yankee penchant to commemorate these firsts with signage. I’m not sure, but I think my favorite will always be the Site of the world’s first condensed milk factory in the woods of Torrington. Yeah, I’ve been there.

But back to Hartford, where the very first public pay phone was installed. The blue sign marking the point is the blue dot to the right of the yellow sign that wraps around the corner in the picture here. Pay phones were preceded by pay stations, manned by telephone company attendants who would collect payment for calls placed. But in 1889, the first public coin telephone was invented by William Gray and installed at a bank in Hartford. The invention quickly caught on, and by 1902, there were 81,000 payphones in the United States.

Probably more than exist today. The first phone was a “postpay” machine (coins were deposited after the call was placed). Gray’s previous claim to fame was inventing the inflatable chest protector for baseball – which you can pay homage to every summer a mile south at Coltsville when the vintage baseballers take the field. 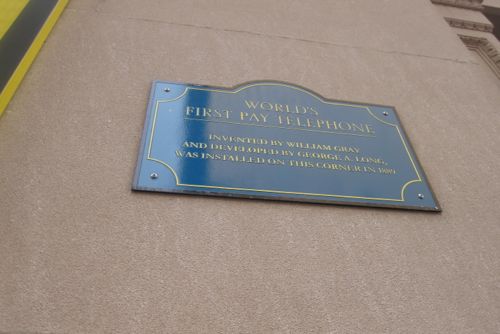 World’s First Pay Telephone
Invented by William Gray
And developed by George A. Long,
Was installed on this corner in 1889

Nine years later, a prepay telephone, known as the Western Electric “No. 5 Coin Collector” was first installed in Chicago in 1898. Which proves once and for all that Hartford is cooler than Chicago. After all, Stephen A. Douglas gave a speech here according to another plaque across the street. No WAY he did that in his home state.