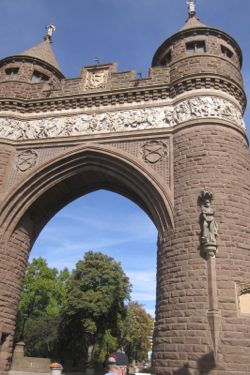 There are so many cool things in and around Hartford’s Bushnell Park, I wouldn’t have any idea where to begin explaining it all.

Actually, that’s a stupid statement because it’s pretty clear that one would begin at the Capitol building (my 2008 visit), then progress to the statues around the park, then to the history and formation of the park, down the hill, past some notable trees to the historic carousel followed by some pump house/Park River history and then back around to the Memorial Arch.

Here is a rather old CTMQ Page about Bushnell Park that gives an overview about a lot of this stuff. 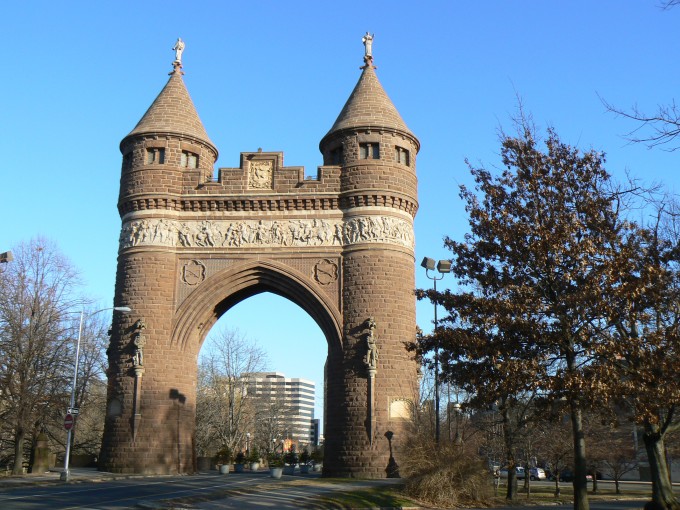 Throw in some food trucks, some male prostitute solicitations and maybe a quick visit to the Legislative Office Building (Yep, I visited that too) and boom, that’s a solid day out in the Park. Hopefully you’ll end with one of the excellent (free!) evenings of jazz there as well.

For as long as I’ve been living in the greater Hartford area, I was ignorant of how easy it is to get up to the top of the Arch. I don’t know why; I guess I just assumed it was a solid mass and that was that. As it turns out, the arch is entirely hollow – which must have been a good thing all those times drunks crashed into it before they made Trinity Street a little safer.

The wonderful Bushnell Park Foundation hosts Arch tours way more frequently than you’d think. The Foundation volunteer Arch Guides offer free tours of the Arch on Thursdays from noon – 1:30 pm, beginning the first Thursday in May through the end of October. Make the effort – it’s worth it.

My tour began on the street with a short history of the park. I’m far from a know-it-all, but yeah, I knew it all. Jacob Weidenmann, the trees, the Park River, the Olmstead firm, the Capitol building… For a brief moment, while I stared off into the distance, I thought the guide probably thought I was some ignorant jerk, but then I realized she didn’t care. 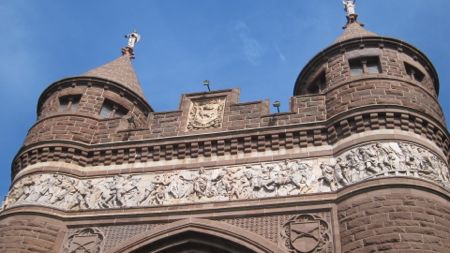 Once we got to talking about the George Keller designed arch itself, I paid much closer attention. The arch is quite beautiful up close. And as with most of these types of things, there are stories within stories in the friezes and all sorts of symbolism that is completely lost on almost everyone who looks at the Arch.

The Arch is Portland brownstone, as you’d probably imagine. (https://www.ctmq.org/portland-brownstone-arch/”>Here’s a little page about the arch which was a bit of machinery that helped quarry the stone to build the arch.) It is 116 feet tall and has 96 steps leading up one tower to the walkway across the top. It was designed by George Keller – more about him in a minute. It is one of the earliest monuments in Connecticut to use the term Civil War in its lettering. 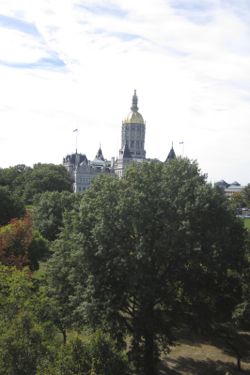 There are a (seemingly) a hundred accounts of the Arch’s formation and significance. I’ll go with the Connecticut Historical Society’s page about it. Note, what you’ll read below is heavily edited down for brevity, so you really should go read the full story.

Okay, so why is this thing significant? It is significant historically because it is a tangible symbol of the honor and respect paid by the City of Hartford to its men who served in the Civil War.

George Keller, Hartford’s leading 19th-century architect, nationally known for his Civil War monument designs, wished to create the monument for his hometown. A competition for designs, however, aroused his ire, and only after much time and negotiation did he receive the commission.

What a wuss. Can’t handle a little competition, Georgie?

Keller noted in his “Reminiscences” his reaction to [the competition]. “Having shown my ability in this direction, I felt, when my own town proposed to erect a monument to war soldiers and sailors that I should at least be consulted about the design. Instead of which it was decided to advertise for designs in open competition, offering $3,000 in prizes. I abstained from entering the competition.”

On December 6, 1881, at the first meeting of the new committee, the Reverend Francis Goodwin, a member, “showed a pencil sketch of a bridge with an emblematic arch superimposed thereon and it was decided to consider the feasibility of such a structure” (“Reminiscences”). Goodwin, a wealthy cleric, was one of Hartford’s most active citizens and himself an amateur architect. By proposing a bridge and arch, he started Hartford on the way to a Civil War monument constructively different from the conventional single shaft memorial so widely used in other cities. As Hartford’s monument was to become perhaps the first permanent triumphal arch in the United States, the importance and originality of Goodwin’s concept cannot be overstated. The Hartford arch predated the competition for the Grand Army Plaza Arch in Brooklyn’s Prospect Park (1888) and Stanford White’s Washington Memorial Arch at the foot of Fifth Avenue in New York City (1889). 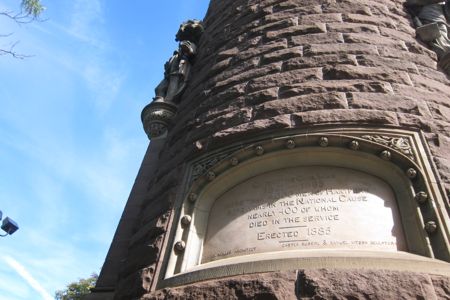 See? I told you this arch was interesting. If you were wondering, the world’s most famous triumphal arch, Arc de Triomphe in Paris, was commissioned in 1806. Anyway, the competition was held and a bunch of nobodies placed 1, 2, 3. But their designs were too expensive and the whole idea was nearly scrapped for a boring ol’ granite spire to be placed in the park.

At this juncture, Keller, who had been following the proceedings, entered into negotiations with the Reverend Goodwin and Judge Sherman W. Adams, secretary of the committee. The first barrier to reconciliation between the committee and the architect was a matter of pique and protocol, as Keller was still put out that he had not been asked to submit a design. Adams blandly suggested to the ruffled Keller, “The way to get an invitation is to ask for one.” Upon hearing the suggestion Keller commented: 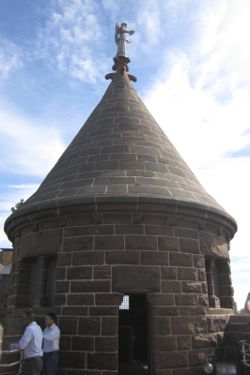 This was a novel idea which had never occurred to me. I at once addressed a note to the committee as follows: “If the Hartford Memorial Committee has discharged all its obligations to the architects hitherto employed, and is at liberty to invite me to submit a design, I would be glad to do so.”

Within a few days Keller received a formal invitation, and the Hartford arch was on its way.

Basically, Keller moved the arch from the middle of the bridge over the Park River to the end of it. He opted for cheaper terra cotta and brownstone. He did a few things with the sidewalks and road to allow for cheaper engineering. The State loved it, and voila, we got our iconic arch.

The tour was really cool and well done. We walked around the base first and the guide pointed out all the friezes that 99% of passersby don’t notice.

The frieze on the north facade, by Samuel Kitson, tells the story of the war, starting on the right with a figure of General Ulysses S. Grant surveying infantry and cavalry on the advance, while on the left marines leap from a boat and rush upon the rear of the Confederates. Kitson, an Englishman who had studied in Rome before working in Boston and New York City, was well-known as the principal sculptor for the interior of the William K. Vanderbilt House in New York City. The south frieze, by Caspar Buberl, a frequent Keller associate, tells the story of peace. In it a noble female figure–the City of Hartford–surveys her citizens gathered to welcome the returning soldiers after they have struck their tents, put out the camp fires, and made their journey home. 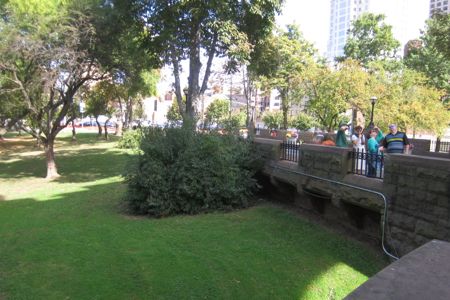 They are beautiful. Next time you are downtown, go look at them. Take the time to walk around the whole thing. You’ll be happy you did so. Oh, but there’s more.

Six figures, three on each tower below the bas-relief, were completed in 1894. These sculptures, according to a description of the arch circulated at its 1886 dedication, were to be the “Farmer” with one hand on his plow and the other on his gun and five other figures in similar transitional poses–the “Blacksmith,” the “Mason,” the “Merchant,” the “Student,” and the “Carpenter.” During the years between 1886 and the time of their execution, Keller made one change. The “Merchant” was replaced by an African 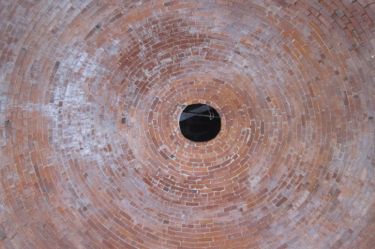 American man who with one arm is breaking the chains of his bondage and in the other hand is holding a slate on which is inscribed the alphabet.

That alphabet slate symbolizes the educational opportunities blacks now had in America. It’s pretty powerful stuff. The tour took us up the spiral staircase to the “bridge” across the top of the arch. The space up there is way more spacious than I would have thought, and the views of the Capitol are unique and beautiful. (I submit our capitol building is in the top 5 in the US.)

A few steps inside the arch is perhaps my favorite part (the picture just below). I learned of this cool bit of Hartford history when I toured Cedar Hill Cemetery in Hartford’s south end several years ago (that tour here). I’ll let CHS tell the story: 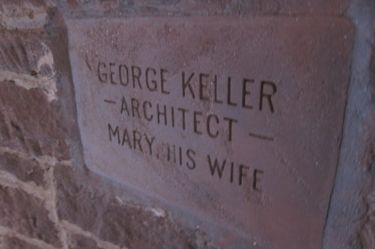 Mrs. Keller in a newspaper interview several months after her husband’s death recalled that Keller and his family “had a horror of cemeteries.” This aversion had been apparent in 1889 when Keller declined Cedar Hill Cemetery’s offer of a burial lot in exchange for some proposed architectural work. It seemed appropriate, consequently, for his ashes to be deposited in one of the public structures he had designed. He liked best the Garfield National Memorial, Cleveland, but as this monument was located away from his home city, his second favorite, the Hartford arch, was selected. Apparently a lifetime of endeavor largely associated with memorials, many for cemeteries, led Keller to conclude that he would prefer to spend eternity elsewhere.

Rad. Oh, one more thing that makes Hartford’s Soldiers and Sailors Arch unique and important: It was the first permanent triumphal arch in America.