“Take, and Eat, for this is the body of Gingerbreadman”
Gingerbread Village & Christmas Bazaar
St. George’s Episcopal Church, Middlebury

I’m not going to suggest you pack up your brood in December and drive across the state to check out this gingerbread village. Even if that’s exactly what we did. But if you are a fan of edible/perishable miniature houses, it’s worth the drive from anywhere within the state. And if you like to spend lots of money on perishable miniature houses, I strongly suggest you get there on the first day they are open to visitors… Because apparently, there are a bunch of people in this world like you. 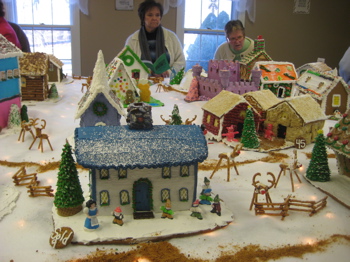 I had heard about this attraction a few years ago, but sort of shuffled it to the back of my brain. I always knew we’d go someday, but it wasn’t high on my list. Then, when I was on the Colin McEnroe show mentioned it on the air. To listeners, it probably appeared to be a revelation to me, but rest assured it wasn’t. After all, this thing has been going on for over 40 years and I wouldn’t be doing my unpaid fake blogger job if I didn’t have it on my radar. 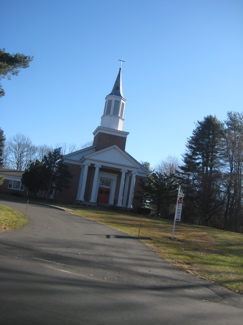 Every year in early December, we have a Gingerbread Village which has been visited by people from throughout the state of Connecticut and nearby states. Members and friends of the parish build a village entirely of edible ingredients. Our village is visited by children of all ages from nearby nursery schools, elementary schools and adult groups and other group settings. Admission and parking are FREE! 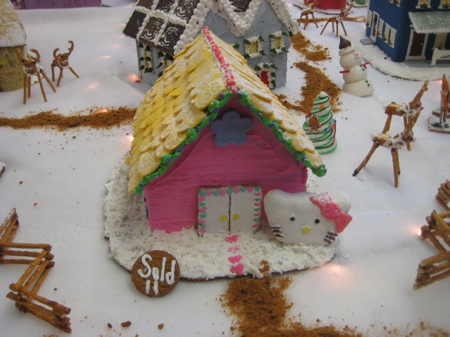 Well, that last bit is a good thing because really, I think if they charged a cover their event my shrivel up and blow away.

We arrived on a sunny Saturday in early December – the event is open for about 9 days each year – to a full church parking lot. We walked into the church and found an orderly line of people snaking out of the gingerbread room. The entire display room is about the size of your living room, with a giant table taking up 90% of the space and a small walkway around the edge. 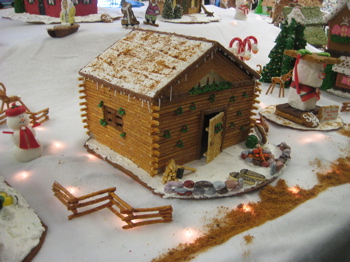 Each year (2011 was the 43rd) someone at the church picks a theme and the builders get to work. This year the theme was “Storybooks” which meant that each house was to be inspired by a children’s book. A few of the house themes were a bit scattershot, but for the most part, the builders did a great job of incorporating the idea.

From the nice little booklet I picked up at the show:

Each year the Village is an entirely new creation. More than 350 pounds of flour, 168 pounds of confectioner’s sugar and 145 pounds of granulated sugar, 15 gallons of molasses and 3 pounds each of ginger and nutmeg are combined with 12 pounds of powdered meringue and 80 pounds of margarine to construct the scene. 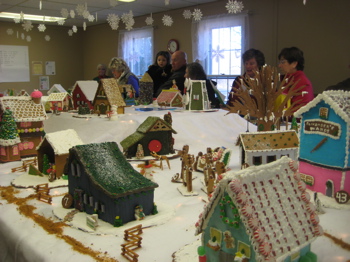 Wow. That’s a lot of sugar. But just look at the scene! There was a nice mix of classic chilren’s tales (Hansel and Gretel, Little Red Riding Hood, Wizard of Oz) and more modern characters like Blue’s Clues and Pinkalicious represented. I don’t really understand it, other than from a fundraising perspective, but all these things were for sale. And almost every single one was sold already.

How much you ask? Here’s the priciest one: 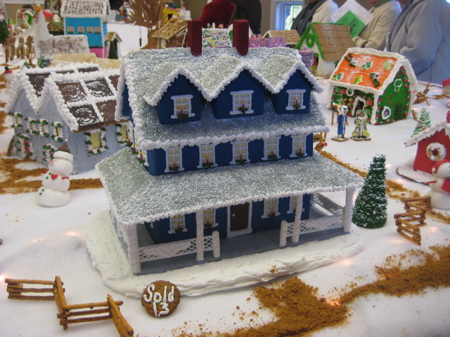 Damian demanded a gingerbread man, which was fun until his head broke off. Fortunately, he was asleep in the car when we discovered the damage, so we were able to eat the evidence. Phew. 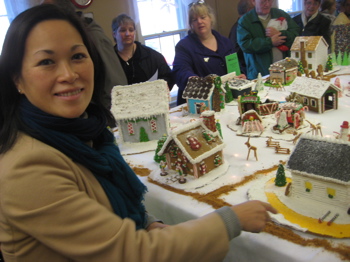 Lastly, there was a bake sale in a neighboring room where they were selling really, really good homemade stuff for ridiculously cheap prices. 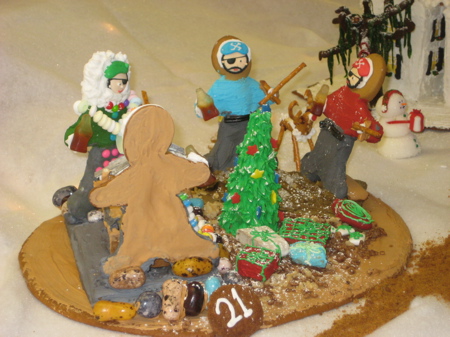 Not all were good.