I Don’t Know How to Say Szegda Either
Szegda Farm, Columbia
September 2019

I’ve been doing this for a while now. People often ask my why I keep doing what I do. There are a million different answer to that question, but one is, “I keep getting pleasantly surprised.” Columbia’s Szegda Farm is one such place that fulfills that “pleasant surprise” bill perfectly. 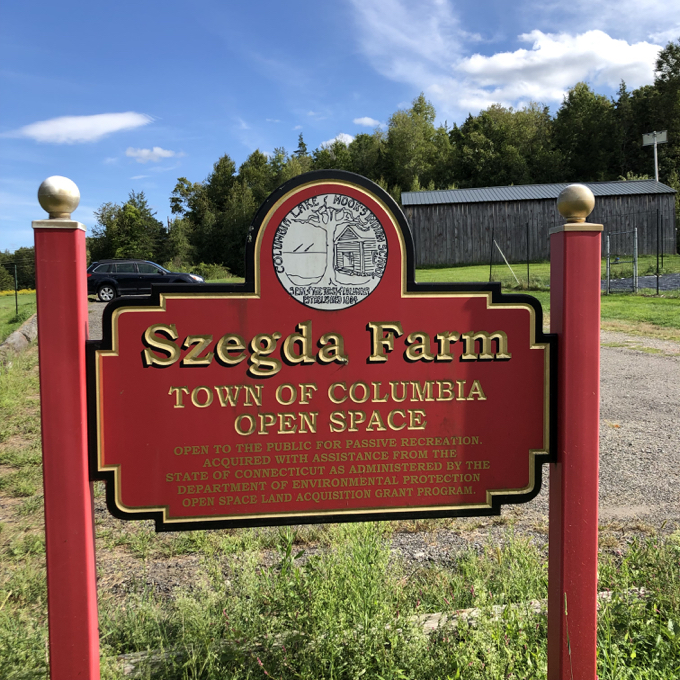 We are talking Columbia here, not exactly a hiking destination. While there are a handful of nice little trailed properties in town, I can’t pretend I had thought too much about it before hitting the trail with my trust sidekick Calvin the Ninja.

Szedga Farm has about 1.8 miles of trails, and even more if you wander around looking for one for a while. (Or at least send your boundless 8-year-old to do so.) There are two parking areas on Szedga Road, a small lot serving the Upper Trails on the east and a larger lot for the Lower Trails to the west, where we parked. 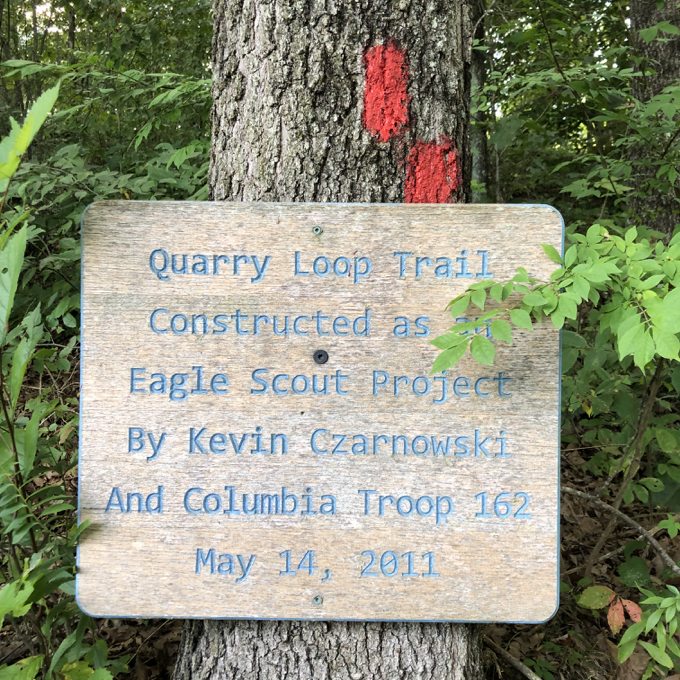 We were off to a good start: Nice hiker’s lot, nice trailhead kiosk, picturesque field and barn. The Szegda family has been farming in the town of Columbia since the early 1900’s. In the 1980s, the family purchased an additional 109 acres of land, which is now known as the Szegda Farm. And we thank them for that. 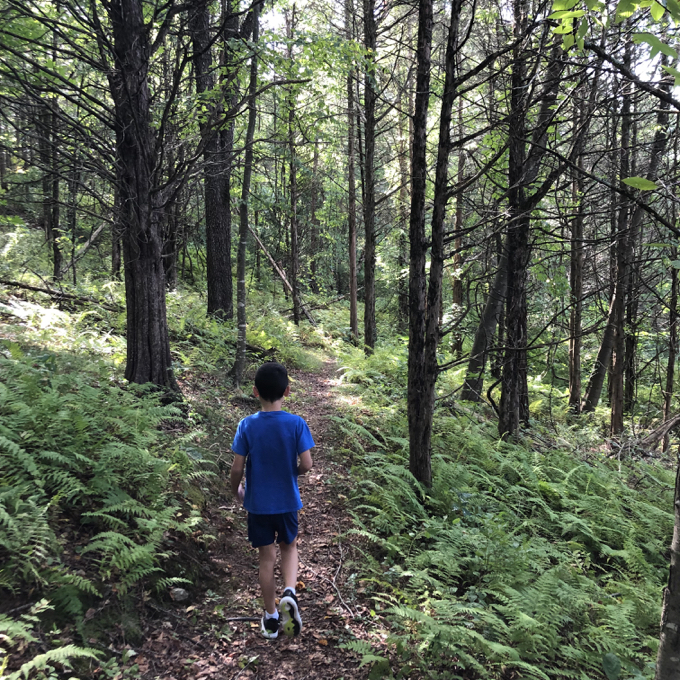 We began with what they call the “Lower Trails,” with the blue-blazed Quarry Loop Trail. Since I had the property’s “Farm” in my head, I was a bit surprised by this trail heading immediately into dense forest and contouring around a rocky hillside. There are more than one massive Wolf Trees here, owing to the long farming history of the property. 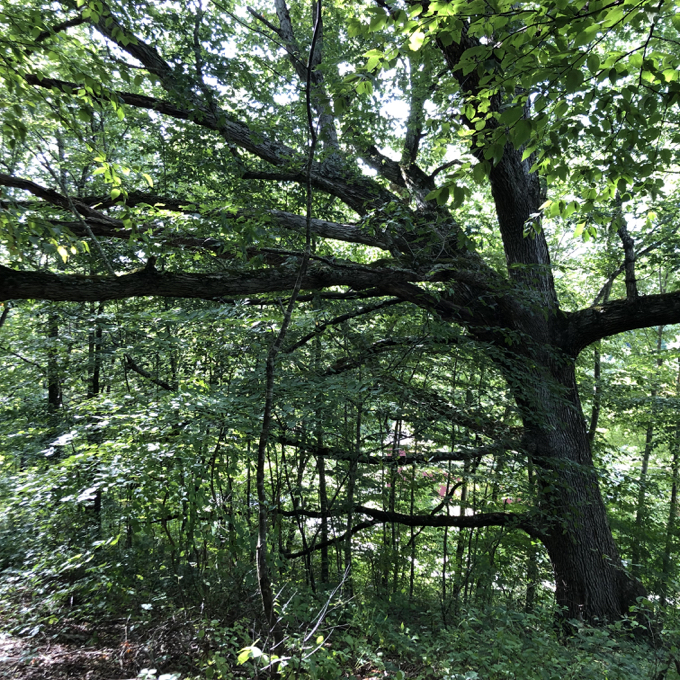 Of course, if I had thought about the “quarry” in the trail’s name, perhaps I’d not have been so surprised. There is an old, very small, very hidden quarry here somewhere, but the evidence for it has been grown over and caved in apparently.

This is a very nice little trail… through a fern and hemlock grove, past a resting bench, and across one of the most verdant moss “fields” I’ve ever seen. Young Calvin apparently needed to test the resting properties of both bench and moss: 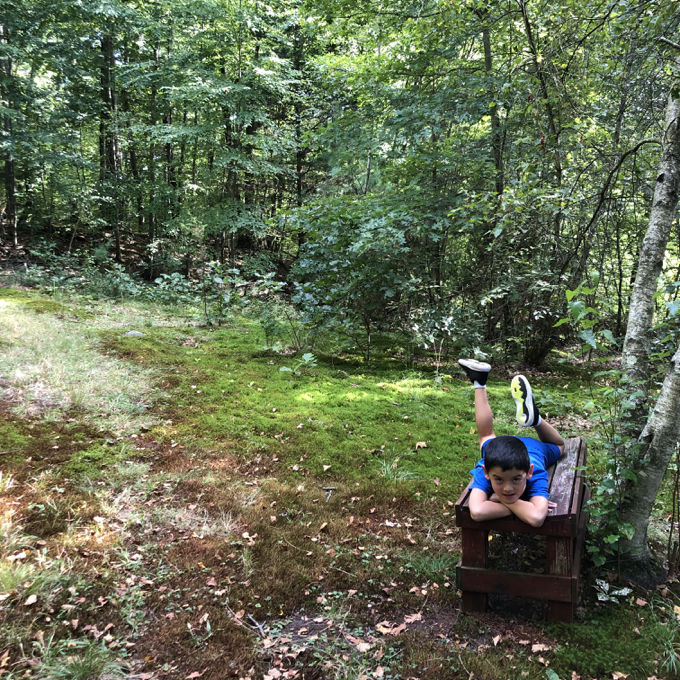 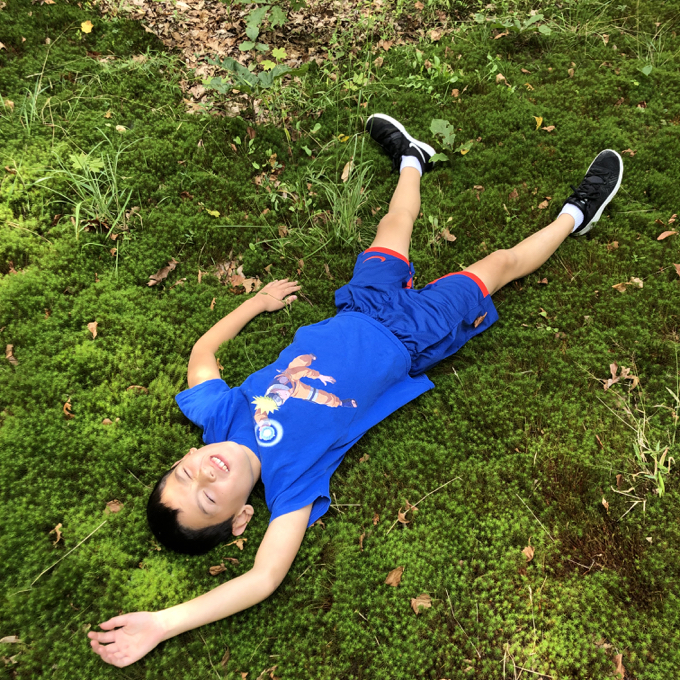 According to him, the moss won out – so much so it was difficult to get him up and moving again. (We’d had a long day.) It does look nice though, doesn’t it? The blue-blazed trail curls around and joins up with the red-blazed Multi-Use Trail. Somewhere near here there’s a “view” down a powerline cut. 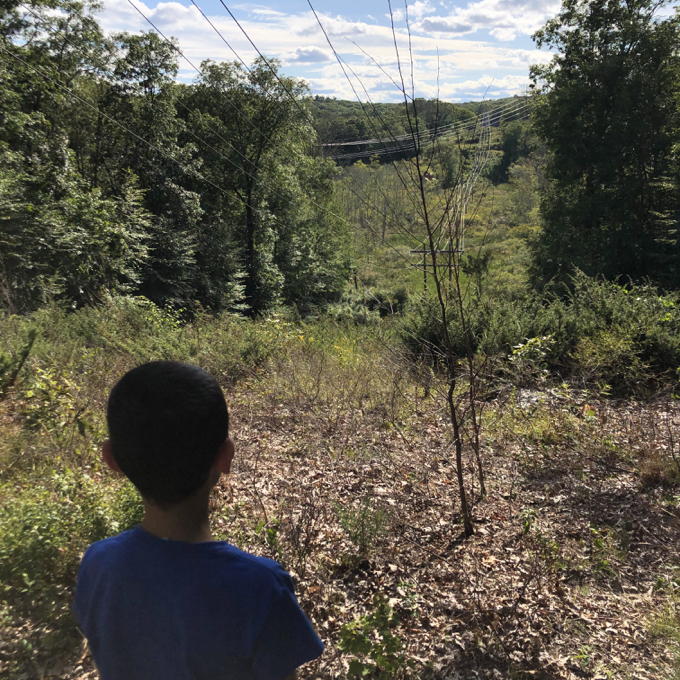 That picture reminds me of so many powerline cut views in nowheresville Maine for some reason. We weren’t high up on a mountain, and it took very little effort to get here, but it just seems so remote for some reason. That transmission line is new, and apparently work is still being done. For shortly afterwards, we came up a temporary road and… lost the trail.

Through no fault of the town or the trail maintainers, whichever utility is doing the work out here has made following the trail somewhat difficult. If you happen to be reading this in late 2019 and are planning to do this hike, I’ll help you out. When faced with this view: 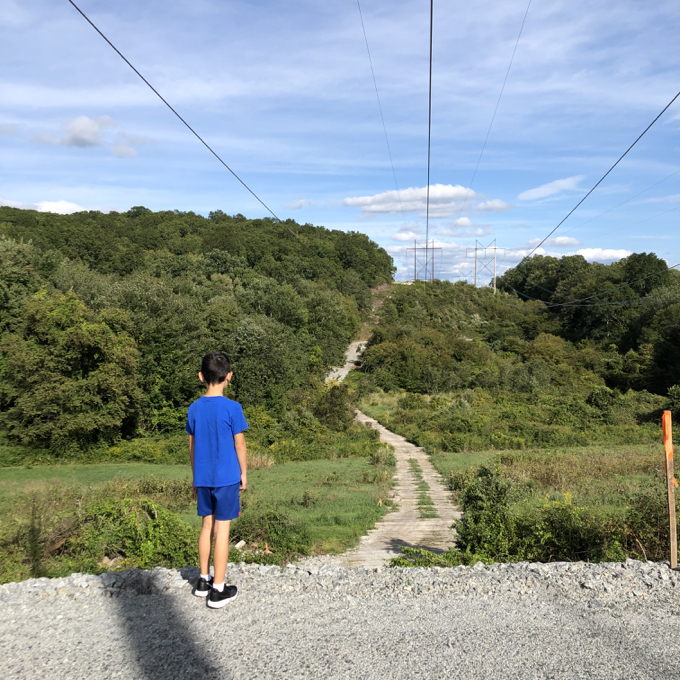 You don’t need a now-rested kid to go do this to see if the trail continues down that hill: 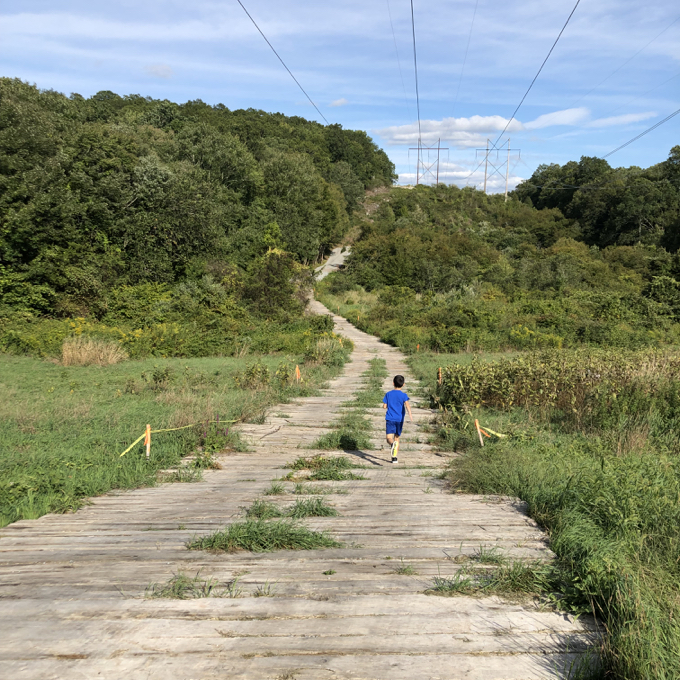 Calvin ran all the way down the hill and to the woods in the distance looking for a blaze. Meanwhile, I turned left into a clearing and found a red blaze after a minute or so. As I snacked and texted my wife, Calvin trudged back up the hill to rejoin me. The map isn’t quite accurate anymore, but we found our way. 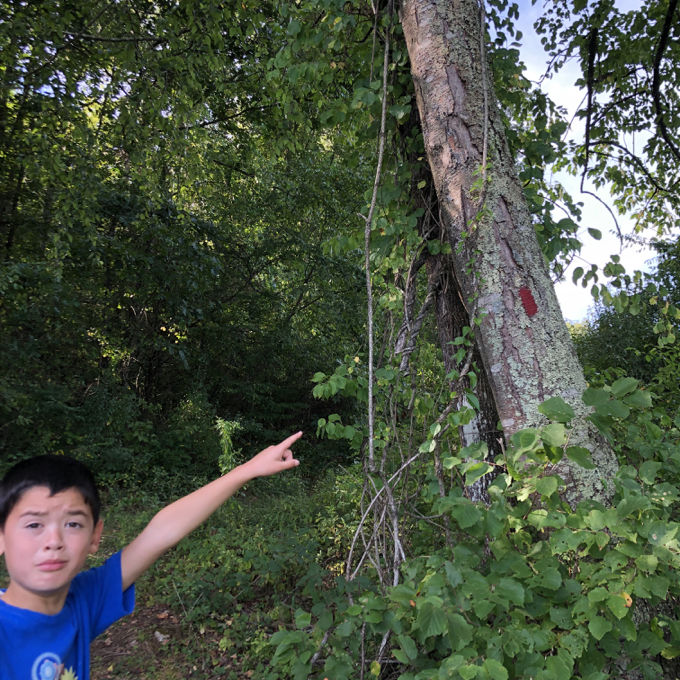 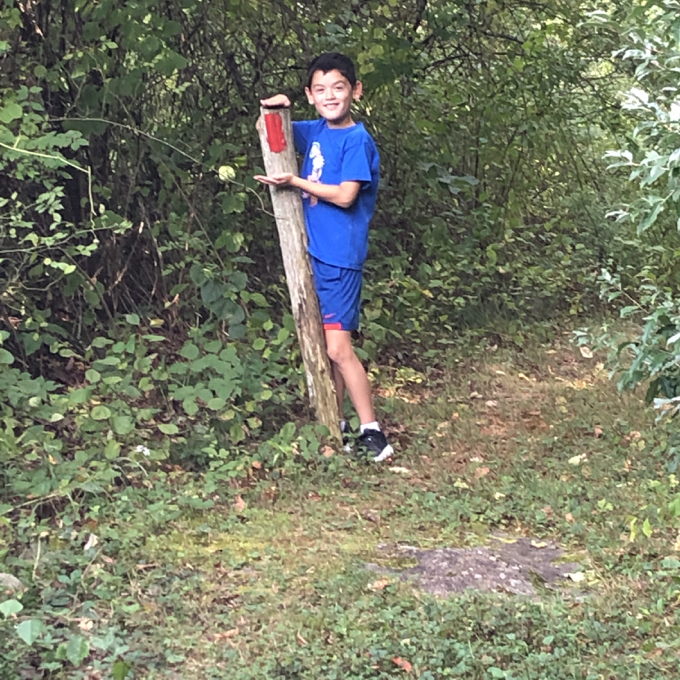 The Multi-use Trail follows old farm roads along the edge of an old hay-field and then to the top of a ridge. It also is cleared through some multiflora rose and very well-maintained. Both the Red and Blue trails were Boy Scout Eagle projects which often sort of get neglected after a while. It’s nice to see these haven’t at all. I was impressed to say the least – again, I blame the utility for screwing us up on the hill. 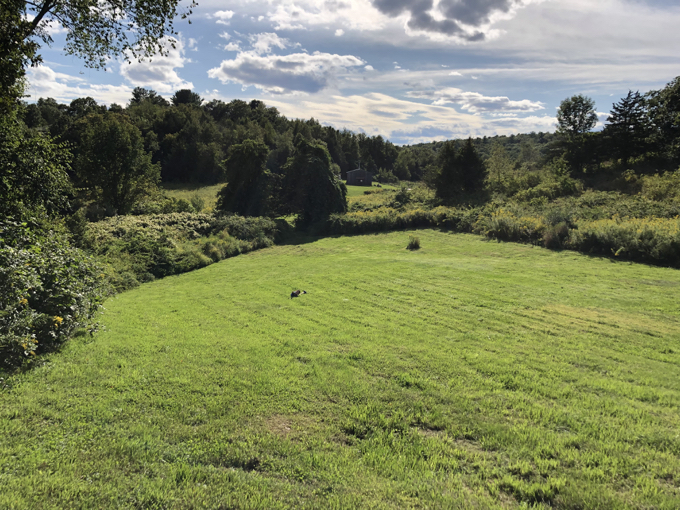 We wound our way back to the parking lot, intermittently on the red and blue trails. For his part, Calvin was happy to be done hiking for the day (again, this was the last hike of a long day) and was heading for the car.

Oh no, son. We’re not done yet! There’s a whole other half of the property to explore! Calvin stared at me quizzically, and I went to go get a trail map to show him: 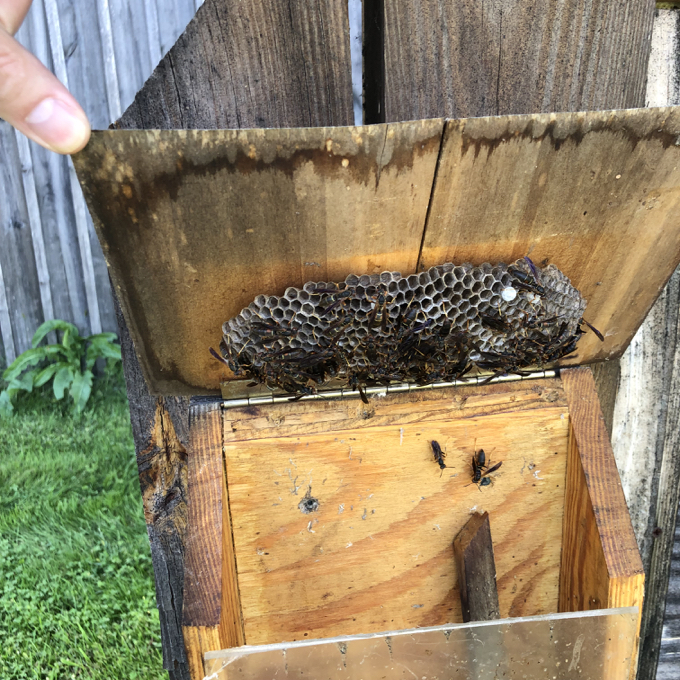 Bzzzt! No trail maps but the box was well-stocked with wasps. That was fun. At least it put a pep in Calvin’s step. So much so, that we traversed the field the only way we know how: With a Naruto run: 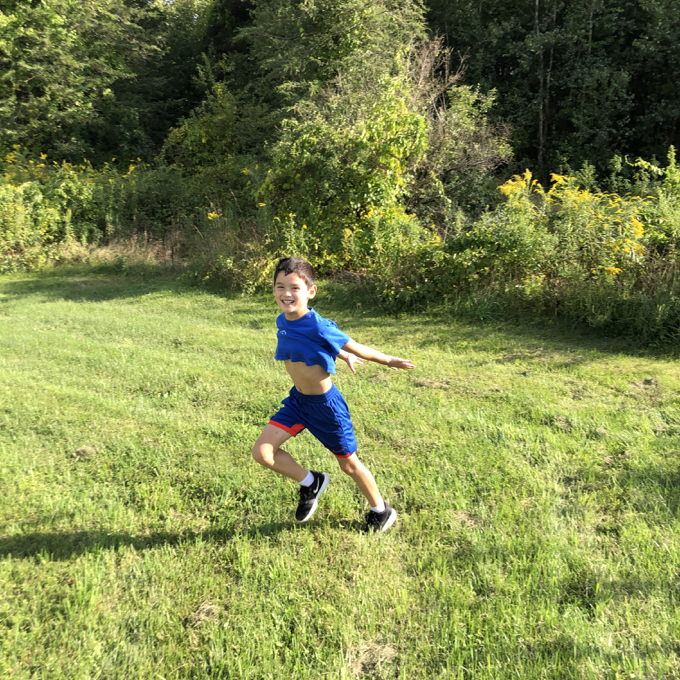 Nice work, kid. Let’s see how it compares to the ninja himself:

The “Upper trails” consist of the Habitat and Ridge Top Trails. These were the original Szegda Farm trails and are also blazed well and are nice and clear. Calvin chose to do the yellow (Ridge Top) trail which required hiking half of the purple (Habitat) trail first. 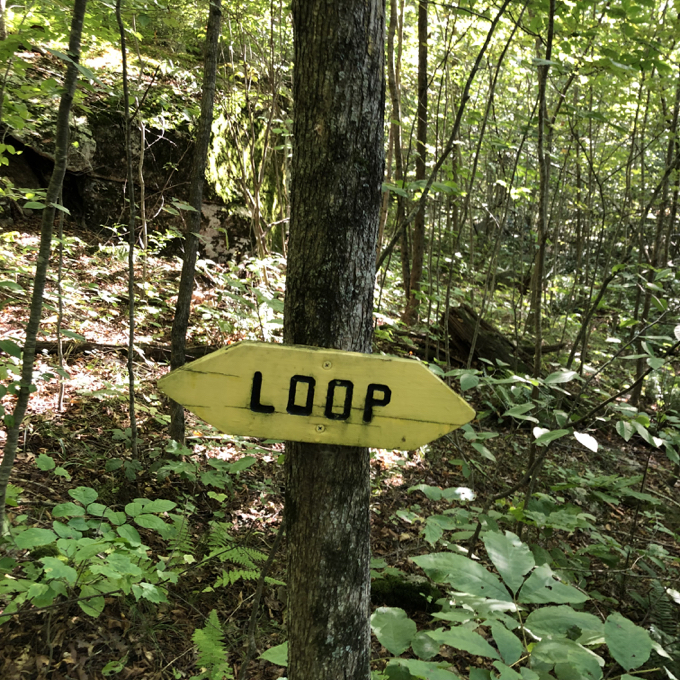 The Ridge Top trail, hiked counterclockwise, takes hikers below a cliff face, then up over a quick scramble and through a dense hemlock grove. And there’s a little (very, very little) climb up to the – you guessed it – top of the ridge (cliff) and then along some exposed rock to complete the little loop. 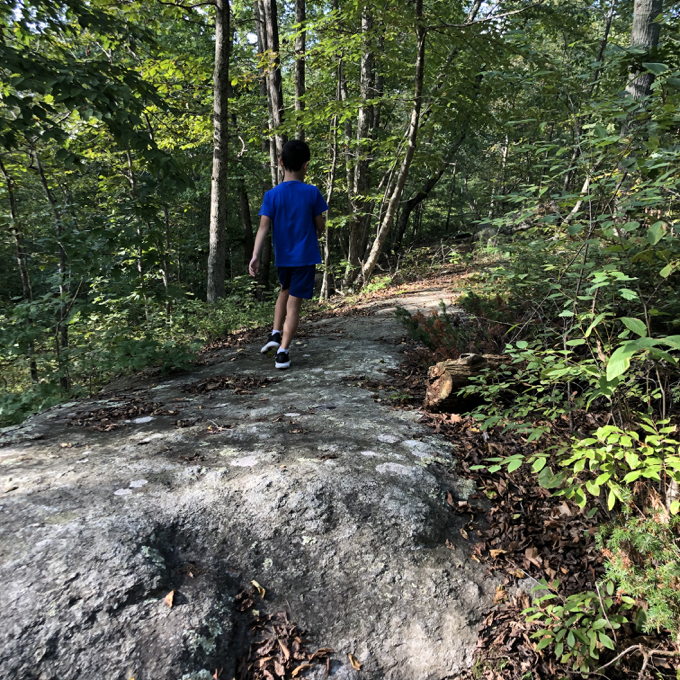 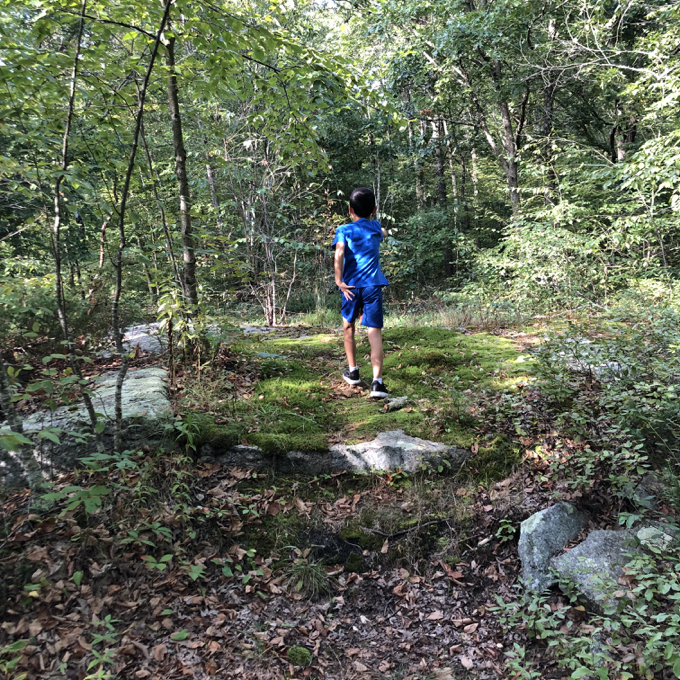 The Habitat Trail is the wettest trail at the Farm, skirting some wetlands and crossing a stream. We made quick work of that loop and before we knew it, we were back looking at the field again that now stood between us and the car.

Another Naruto run? You betcha! My kid rules. 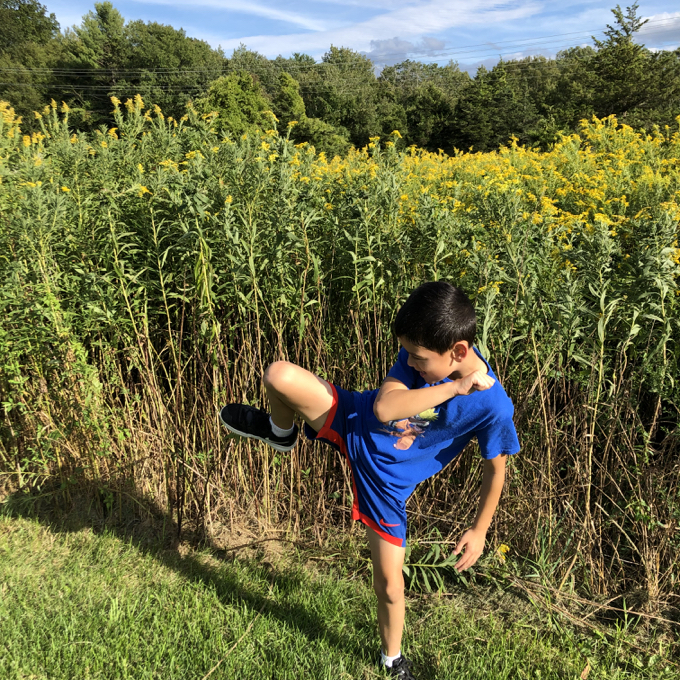 As noted at the top of this page, I really enjoyed the Szegda Farm Trails. In under two miles, we experienced a diverse array of New England; farm, field, hemlock, granite, wetlands, and deciduous forests. A big hat tip to the scouts and the town for making this place what it is. 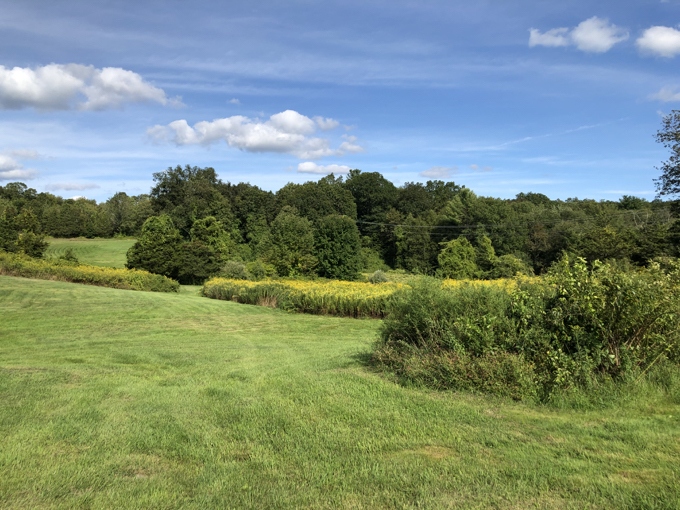