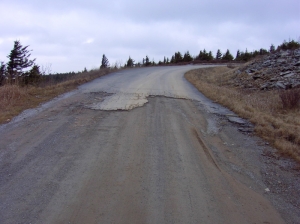 Highpoint # 16 Spruce Knob, 4,861 feet (24th highest) November 22, 2004 West Virginia is an odd state. It has a terrible rap for being backwards and poor. It was a Democratic stronghold until 2000, and then voted for Bush. Twice. It's famous for a John Denver song, coalmines, and being so lame that Virginia … END_OF_DOCUMENT_TOKEN_TO_BE_REPLACED