Where Being a Shell of Oneself is a Good Thing
The Chocolate Shell, Old Lyme
February 2020

I’ve struggled for a decade to figure out how the state’s tourism folks decide on what chocolate shops get to be on the Connecticut Chocolate Trail and which are left off. Most are no-brainers of course, but then there are the Chocolate Shells of the world that leave me scratching my head. 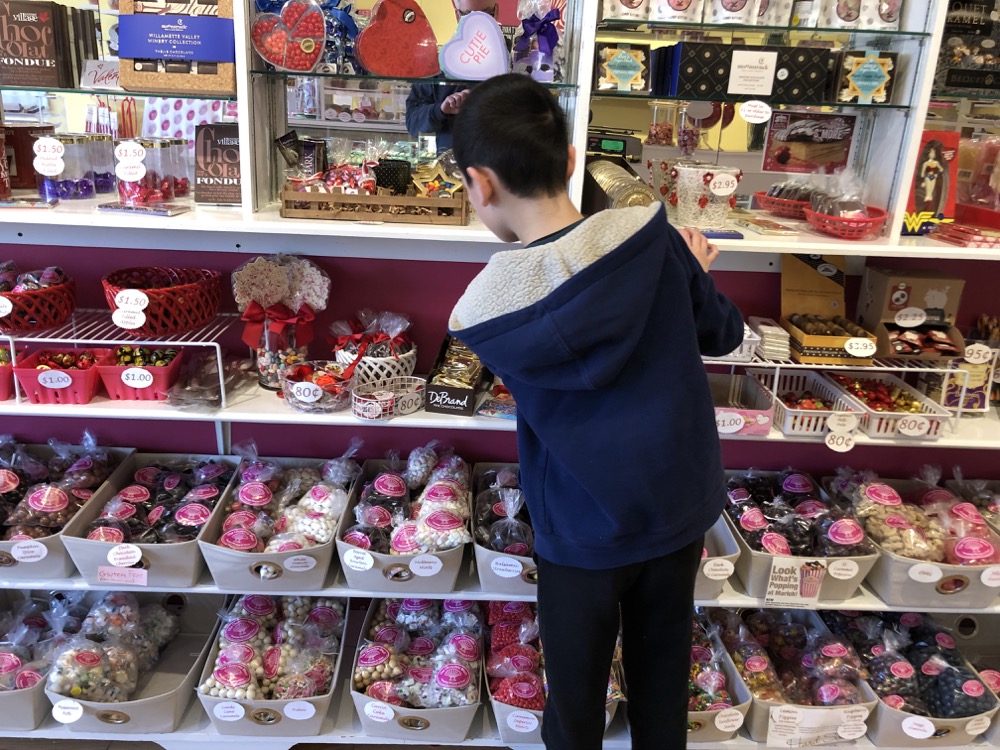 Not that The Chocolate Shell isn’t great – it is! But they don’t make or mold anything here, and I’ve always felt that’s what sets the other Chocolate Trail joints apart. (Though not all actually make or mold their own chocolates.) Oh I don’t know. It’s a cute chocolate and candy store in cute Old Lyme. Good enough for me and Calvin.

This joint has been here since 1980! The current owner bought it in 2011 on a whim after seeing a For Sale sign. She says she simply likes to make people happy and what makes people happier than chocolate and candy. 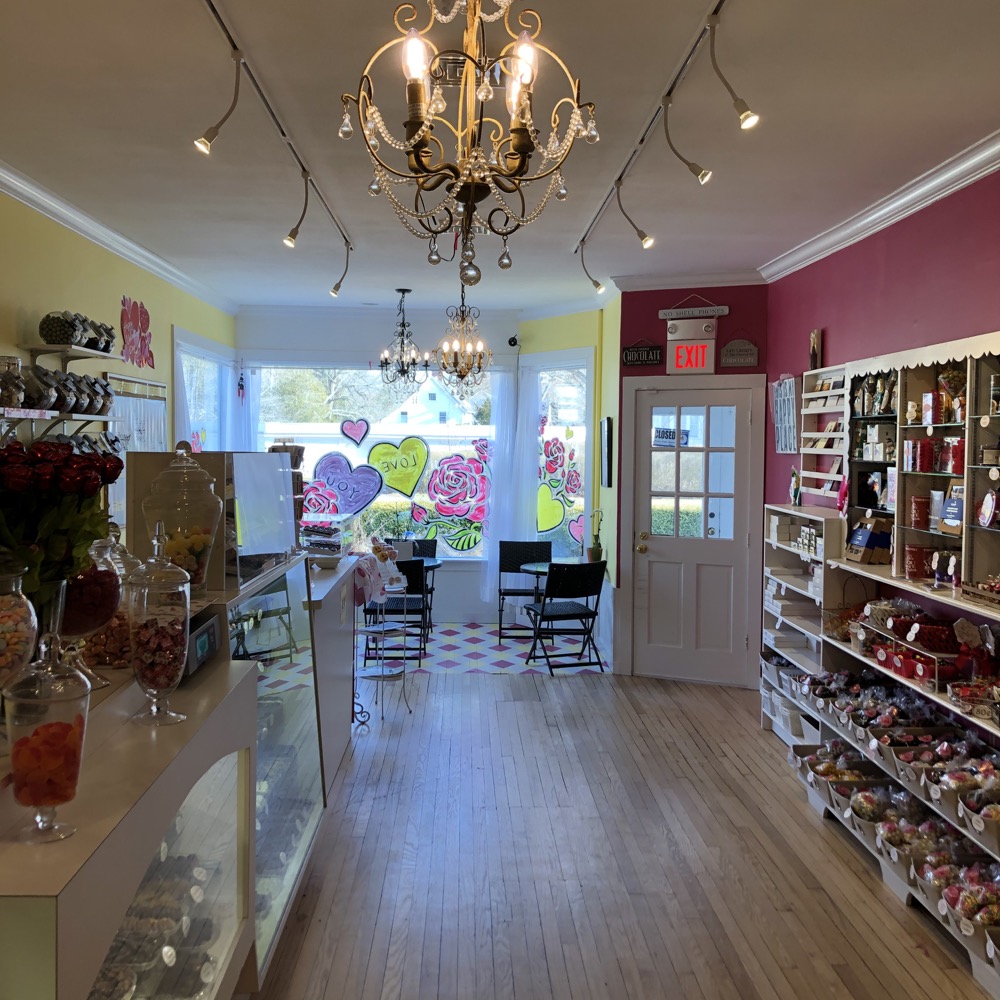 The store brings in all sorts of chocolates from all over the place – ostensibly from higher end chocolate makers. Many of the chocolates are specialty products that aren’t sold anywhere else around, but… Oh I don’t know. Chocolate is delicious! The Chocolate Shell sells good chocolate!

But or for us, the fact that the store is just as much, if not more, a vintage candy shoppe with the extra ‘pe’. Actually, I don’t want to pigeon hole it as only “vintage,” as there is an entire room devoted to current candy types. 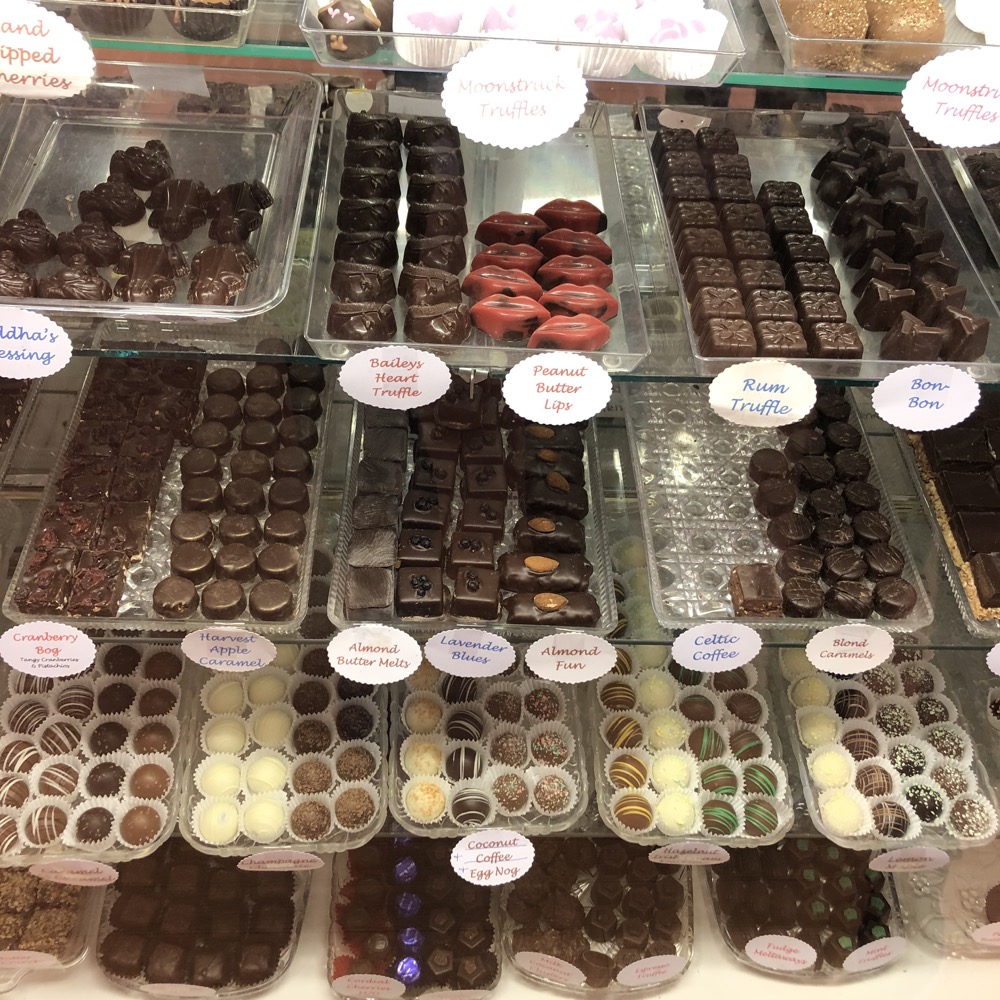 Three tiers of shelves stretch along the walls; none of them out of the reach of eager hands. [Owner Barbara] Crowley doesn’t restrict kids in their explorations – everything in this section is wrapped and neatly organized in small glass apothecary jars. Violently sour Nerds, jawbreakers the size of baseballs, Swedish fish, and media themed novelties are found alongside treats that parents and grandparents will recall from their youth. Atomic Fireballs, Pixi Sticks (in traditional and giant size), candy bracelets, gummies of every shape and flavor, and even sweets dating back to the 40’s and 50’s such as Necco wafers, Bit-O- Honey, candy buttons, Sugar Daddy pops, and Gold Nuggets in their drawstring cloth bag can be found.

“Jawbreakers the size of baseballs,” you say? 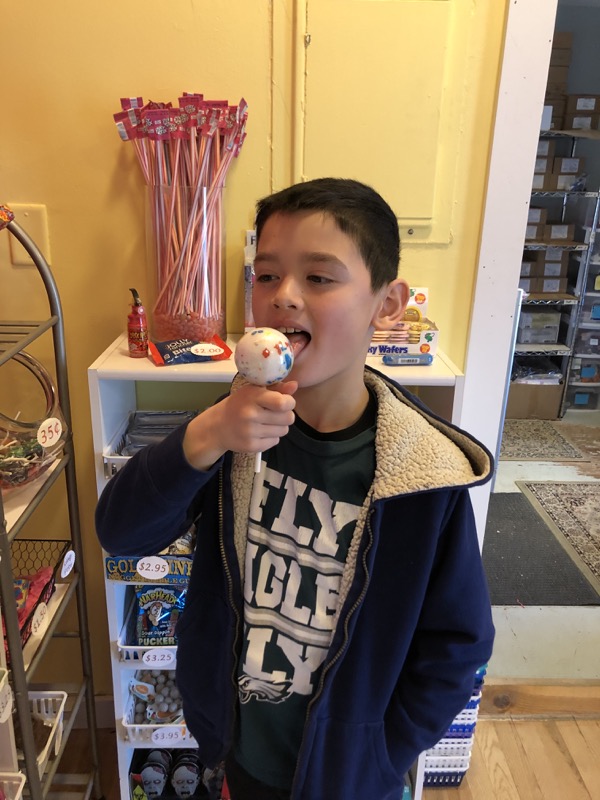 Before you ask, “how would anyone eat such a thing?” Calvin assured me that he would figure out a way. Sadly for him, I didn’t give him the opportunity to try. I love the old timey candies at these types of places. Unfortunately, the world’s greatest candy was not here: Goldenberg’s Peanut Chews.

The current Peanut Chew is slightly different than the Peanut Chews of my youth – back when I’d go to the local WaWa for a hoagie and pick up some Tastykakes, Old Bay Crab chips, and Goldenberg’s Peanut Chews. These days, you can find Tastykakes, crab chips, and Peanut Chews up and down the east coast. Back then, all three were pretty much only Baltimore to Delaware to Philly. 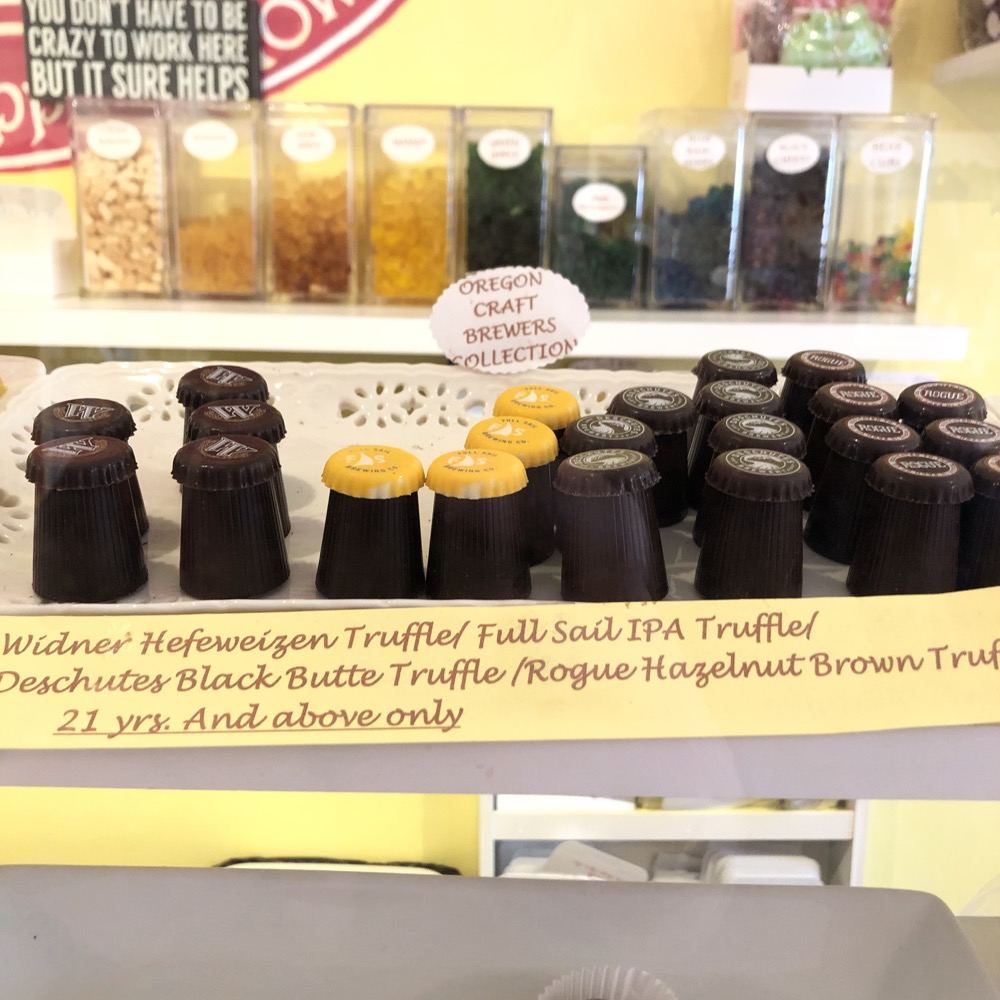 (Goldenberg’s was bought out around 2002 and they made a mess of perfection, but seem to have gotten back to the roots. If you’ve never had one, they’re not sweet – just dark chocolate, peanuts, and molasses and yes, they really are my favorite candy so if you ever want to ingratiate yourself to me for the thousands of pages of fresh CTMQ content, that’s one socially acceptable way to my heart.)

Oh yeah, The Chocolate Shell. It’s a great candy store. We picked out a few chocolates and Calvin immediately wanted to eat them all even though we’d bought them for Hoang.

I probably should have bought him that dumb jawbreaker… if only to keep him quiet about the chocolates for a while. 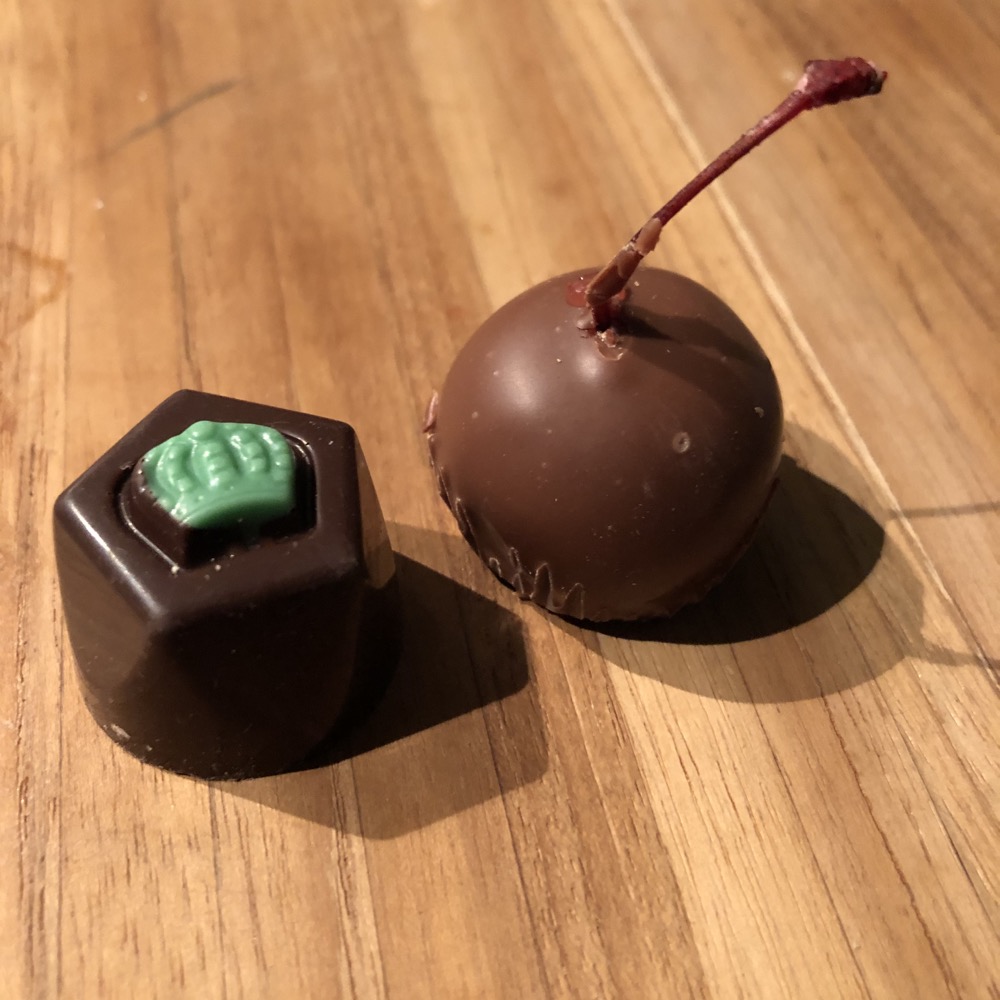 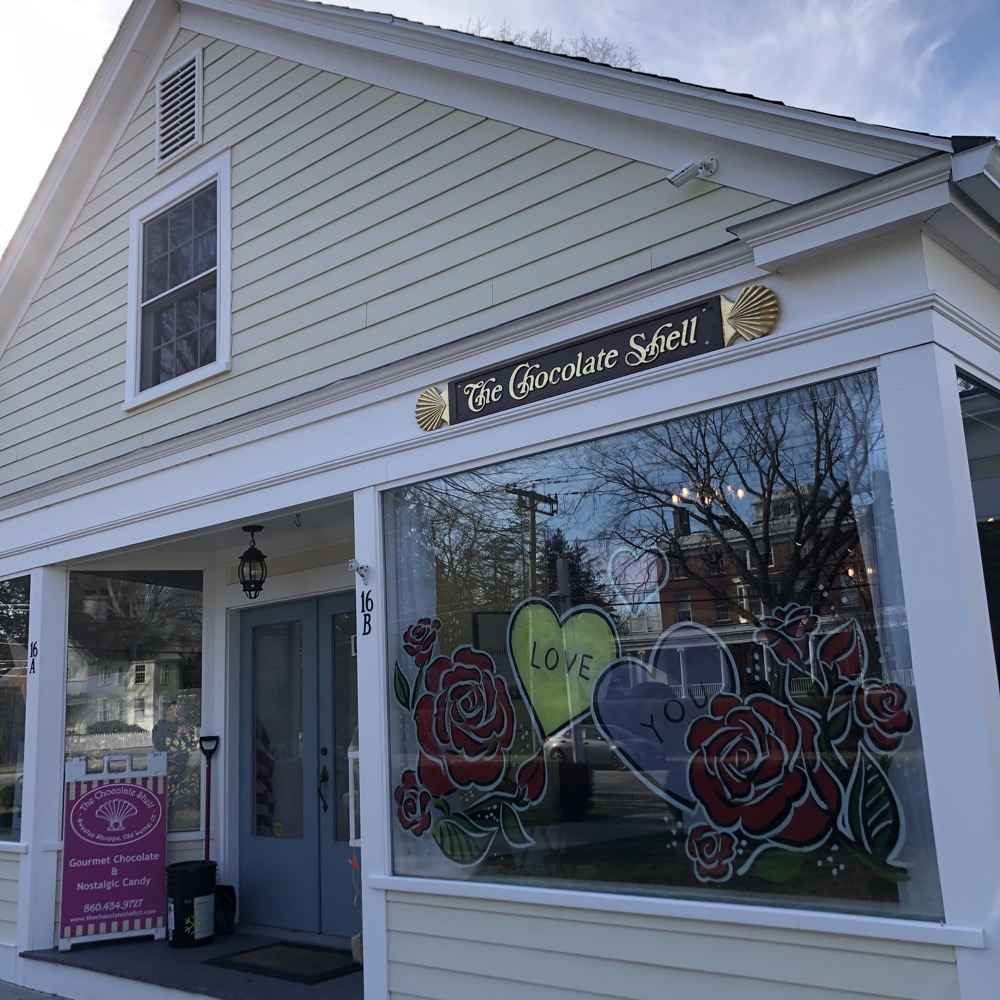