The Last of the Mohegans
Uncas’s Gravesite, Norwich
November 14, 2008

Not really. Uncas wasn’t the “Last of the Mohegans” nor was the character in “The Last of the Mohicans” based on much of Uncas’s real life. Which makes him all the more interesting as his “real” life history is a mix of fact and fiction. Then, on top of that, James Fenimore Cooper wrote the famous book and used “Uncas” as the name of the main “Good” Native American character and things got all screwed up. THEN, Hollywood got into the act and filmed 12 movies based on the book and now who knows what the real Uncas did and didn’t do? 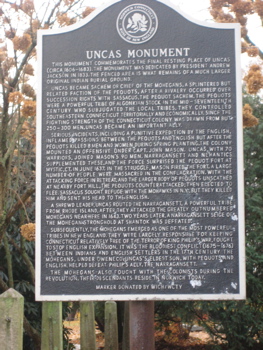 Facts: Uncas was a read dude born around 1588. He was sachem (leader) of the Mohegan Tribe in the early to mid-17th century. Involved in wars with Narragansett Indians in 1640s; supported by English colonists until 1661 dispute with Massasoit; forced by English to surrender prisoners and stolen goods; required to leave sons as hostages in return for cooperation in King Philip’s War 1675. There is now an “Uncas”-everything in Connecticut, including Uncasville which is now home to the Mohegan Sun Casino.

Fictions: Everything in Cooper’s books, except the friendship with the English. Everything else you think you know. 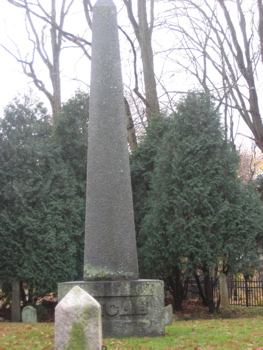 Uncas was basically a sachem back in the day who was smart, shrewd and had a talent for war – especially when outnumbered. He allied with the Pequots when he needed to, went to war when he didn’t. He did the same with the English and the Wampanoags from further north in Connecticut.

He joined the English in a raid on the Pequots which started the Pequot War. The Narragansetts joined them, but later felt they’d attack Uncas and his boys on Mohegan turf. That didn’t turn out so well for the Rhode Islanders, as you can read about here, at my visit to Indian Leap.

Pequots attacked him, Narrangansetts tried again – both to no avail. After using up their usefulness, Uncas ceased allying with the English and somehow kept southern Connecticut safe from King Phillip’s War as well.

Because of his legendary status in life and in death, he’s become Connecticut’s most famous dead Native American. In fact, the foundation stone supporting the obelisk monument at his gravesite was laid by none other than President Andrew Jackson. Which is kind of weird considering his record with Native peoples. 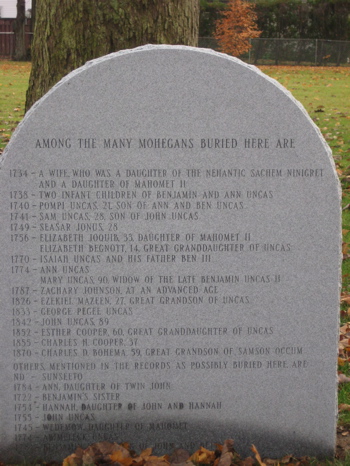