The Pitkin Glass Works’ inclusion in CTMQ was iffy. I mean, if I plan on incorporating every ruined building with scant historical significance… Wait a minute, why not? At least maybe as long as they have an official state sign and a robust historic story, they’re good enough for me. And this place certainly qualifies. 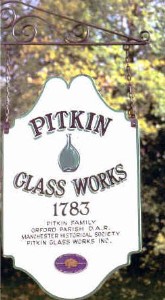 Cult hero EdHill and I were on a day-long CTMQ trip with several stops in Manchester. Back at the Old Manchester Museum visit, we learned a little bit about the Pitkin Glass Works. Most importantly was how Richard Pitkin and his sons were granted a monopoly by the General Assembly of Connecticut for the manufacture of glass for 25 years as recompense for their providing gunpowder, at a loss, to the Continental Army, 1775-1781.

Ed had actually set it up to meet his friend (and Manchester resident) Liz right there, at the Glass Factory ruins. You know how you and your friends meet up at the swanky new martini bar or maybe at the club for a concert? And how that’s cool? Well, Friends of CTMQ meet at Glass Factory ruins… And they like it. 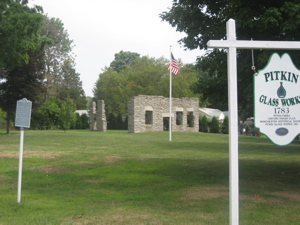 Liz actually gave us some good history of the area; like how she and her friends used to have unrestricted access to the ruins as children and used to light off firecrackers on them. Or how “that house over there used to be a tavern that George Washington got drunk in.” (Liz is a joker and is aware of the long-running CTMQ joke that Washington slept and drank EVERYWHERE in Connecticut. He was, apparently, the Lindsey Lohan of his day.) There was, at least, a tavern in the area, I’ll give her that: 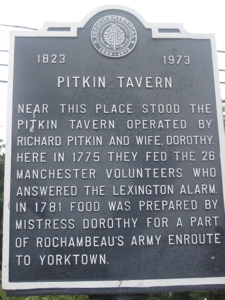 The glass factory remained in operation until about 1830. They produced demijohns for the West Indian trade as well as bottles, flasks, inkwells and other stuff, usually in a shade of green. Pitkins were considered the best designed and colored glass in the country and today have fetched up to $25,000 at auctions.

No one really knows why the factory closed, but the building fell apart fairly rapidly. The Pitkin family retained the property in the 20th century, but in 1977 found it too costly to maintain and tried to sell it to a commercial venture. This was prevented by the DAR and some concerned Manchester citizens who got the site approved as a National Historic Site. 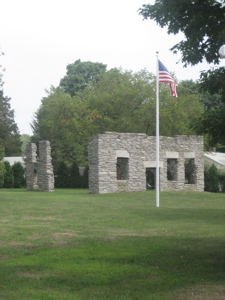 The group has overseen maintenance, had the stone ruins repointed and the oak lintels replaced. (I don’t know what that means, I’m cribbing from an handout from the Old Manchester Museum.) A dig was organized by Central CT State University students but they really didn’t find anything but a few shards. The display back at the museum, it turns out, are mostly replica Pitkins.

BUT, and this may be the reason I’m bothering with this entry… There is a curious and elusive museum up Route 44 from the Pitkin Glass Works in Coventry – The Museum of Connecticut Glass. I’ve seen the building(s) and have corresponded with the curator. As it turns out, they are pretty much never open and can’t provide private tours because they don’t really exist. One or two days a year they sort of open for auctions. And CTMQ will be there. I promise… For YOU, dear readers. They must have some original Pitkins for us to gaze upon. The President says:

Since our buildings are in a construction phase as we obtain funds, we only schedule special exhibits. We can’t secure the exhibition pieces and correspondence in the buildings in their present condition. So there are no materials kept in the buildings.

But their website gives me hope for May 31, 2008. Let’s all descend on them as a pack! (And give them some much needed money!)