Even if this book was terrible, I’d still kind of love it. Stewart O’Nan has a thing for setting his stories in the very real places that he knows best. I’d previously read Last Night at the Lobster which is set, more or less, at the mall nearest my house. 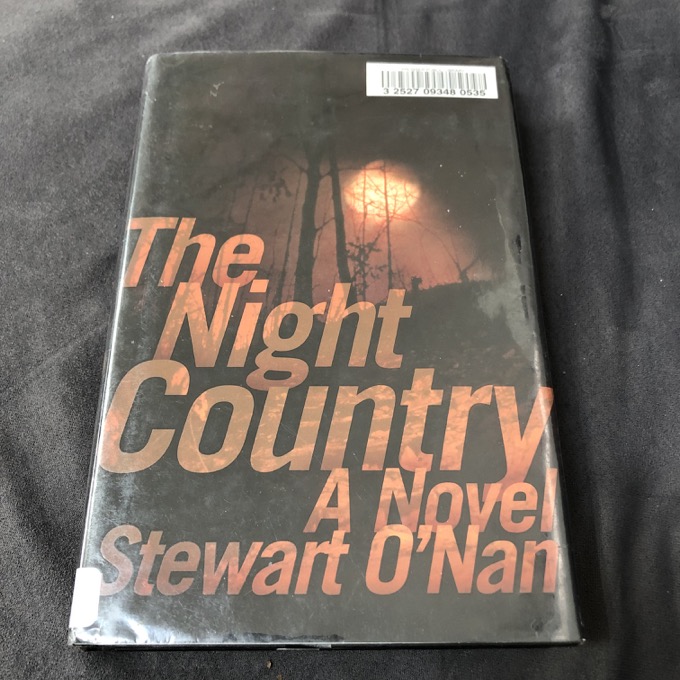 But with The Night Country, he’s all in on his former home town of Avon. Down to street intersections, the Farmington Canal Heritage Trail, and all the stores along Route 44 – though he plays fast and loose with crossing over into Simsbury, but whatever. As a fiction writer, you’ve gotta do what you’ve gotta do.

And rest assured, this book is fiction. It’s a ghost story after all. A good one; not your typical hokey ghost story. The thing about O’Nan’s writing is that to me, he simply enjoys writing. He’s not afraid to write 200+ pages detailing just a few days in a confined space. This is the mark of a talented writer.

I especially enjoy when he makes fun of local people who deserve to be made fun of:

Man, I love that passage.

The Night Country recounts the day before Halloween and Halloween night in Avon – with call backs to the previous Halloween. There are many point-of-view shifts between a dead teen named Marco and the cop who has never let go of the guilt over his actions the year before.

You see, Brooks the cop chased a carload of teens on the winding curves near Avon Old Farms which ended in a horrific crash. Three of the teens died – they are the ghosts of the story – and one survived but in an impaired state (Kyle), and one, Tim, survived physically intact.

The three ghosts sort of inhabit the lives of the survivors. O’Nan empathetically treats Brooks, Tim, and and their families and coworkers as survivors of the accident. They are wracked with guilt, depression, and anguish over the incident.

Tim is sullen and robotic. Kyle, with prosthetic parts and hobbled mind, crushes his parents’ spirits. Brooks is angry, vengeful, and full of guilt. The ghosts can’t really manipulate the living, but they sort of commentate the goings-ons and clearly know what everyone is planning for the one-year anniversary of the crash.

Everything is ominous. Even living in Avon is ominous for Brooks. There is a plot line about him trying to sell his modest house in a town full of new $700,000 construction. There is an accident he has to deal with on Avon Mountain by Deer Cliff Road (because of course there is). There are two punk kids messing with him via the bike trail that has recently been paved in the woods behind his house.

I was left to wonder if O’Nan himself was affected by the creation of the Farmington Canal bike path. He seemed angry about it to me, and we know that lots of people in Avon and Simsbury in particular were not cool with the whole thing.

As the witching hour approaches on Halloween night, the ghosts go into full gear. Brooks “knows” Tim is planning something and Tim “knows” Brooks knows he’s planning something. The ghosts all know too, with one of them against the idea, one all for it, and one noncommittal. (O’Nan’s ghosts can’t really control earthly decisions and actions, as much as they want to.)

At some point, the reader figures out what that thing is, but it doesn’t really detract from the story. Kyle’s mom lays out some flowers at the place the kids died: 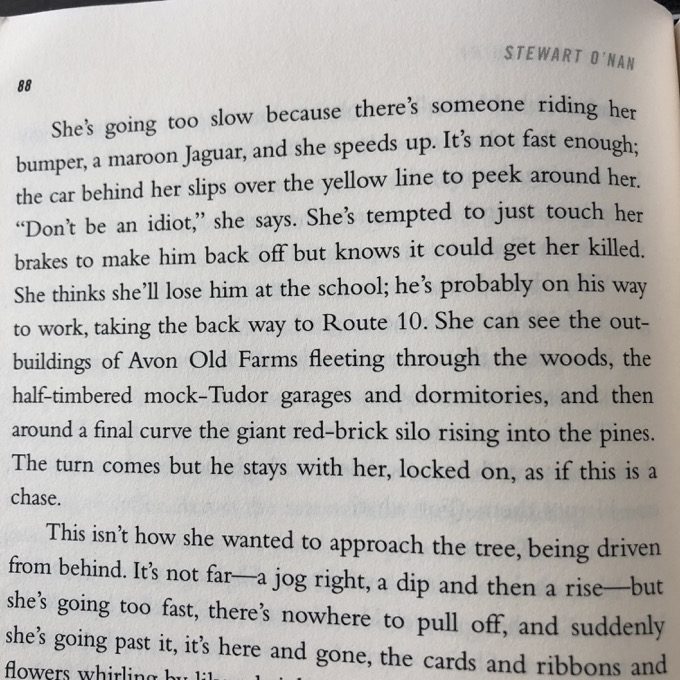 Anyone familiar with the area knows these roads and how dangerous they would be at speed. I’ll save the details of the whole final chapter in case you want to read the book. Which is silly, because you’ll kind of know the plan, but I was curious about its execution until I was actually reading it.

I liked the book and devoured it quickly. The ghosts are a clever way of telling the story and giving the reader insight into the thoughts of the characters. I can’t pretend this is O’Nan at his best, although for an older guy trying to write in the voice of disaffected teens, he does pretty well.

Me being me, I was just impressed to read about a place I am so familiar with. Heck, I went and took this picture of the place where the accident occurred: 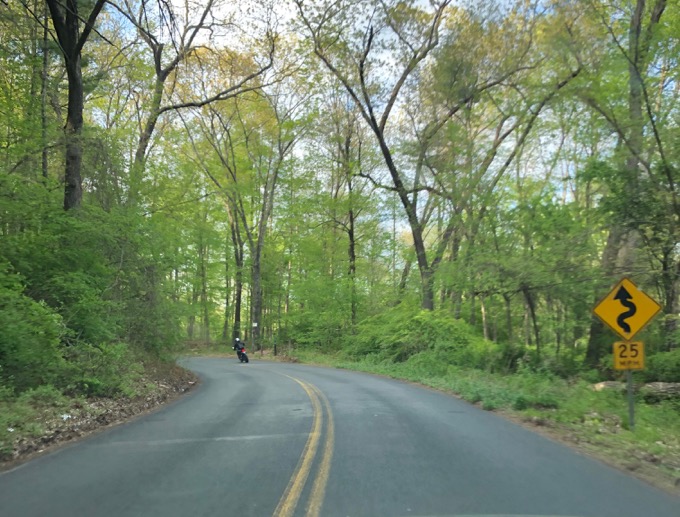 As always, I’m here for you readers… Because I care.