CTMQ > Everything Else > Sports, Thrills, Tours, & Events > The Oldest Collegiate Athletic Competition in US

I was there, I swear. Hoang was there, and so were Damian and even baby Calvin at only 6 weeks old. We were all in New London at the appointed time to take in the sights and sounds of the oldest collegiate athletic competition in the United States: the venerable Yale-Harvard Regatta. We went down to New London to view the 146th edition. We even wore dockers and ascots. 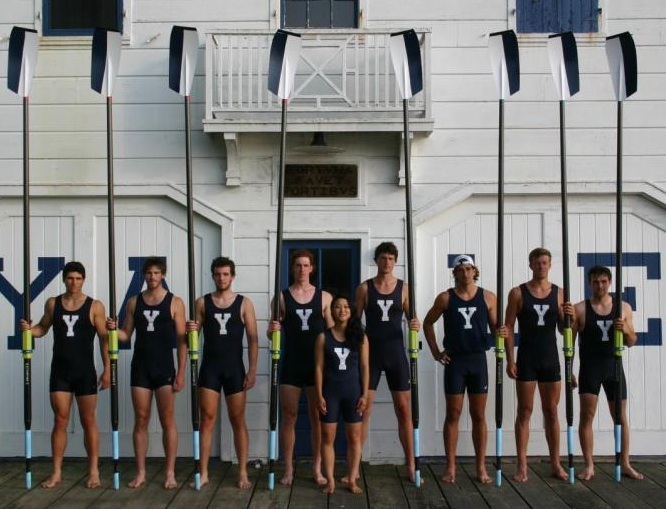 We arrived (I thought) on time and went to (I do believe) the right spot to catch a glimpse of the current rowing teams of the two most prestigious schools in America battling it out on the Thames River. (Note: here in Connecticut “Thames” is pronounced with the ‘h’, unlike the Thames in England where it’s not. I enjoy that.)

But what we found when we got to the spot under the Gold Star Memorial Bridge was a whole lotta nothin’. So we drove over to New London’s Riverside Park where I’d read there would be a party going on to celebrate the regatta.

And indeed, there was a party over there – but I guess it just wasn’t what we expected. It looked fun, sure, but it also looked a little rough around the edges. And with a special needs kid and a 6 week old baby, it just didn’t look all that appealing to us. So I drove back around to the landing under the bridge to try to figure out what was going on. 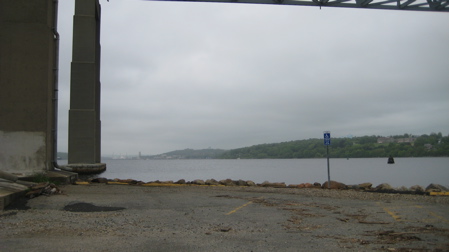 Still nothing. There were some vans with empty rowing boat racks, but that was it. So Hoang and I looked out across the river and imagined what it’s like to watch the Winklevoss twins powering up the river (sometimes they go up, sometimes they go down, based on currents and such.)

So we gave up and went over to the Nathan Hale Schoolhouse a short way away in downtown New London. I asked the guy there what was up and he acted as if I was crazy because yes, absolutely the regatta is taking place and we must have been blind/stupid/in the wrong city to have missed it.

Turns out, the whole thing is over in seconds these days and there are no longer fans or any fanfare. My, how things have changed! This thing was massive back in the day. So what to do, what to do about this page… I know, let’s copy and paste a whole bunch of stuff, including pictures, for you to learn about a rather unique event here in Connecticut.

And maybe you’ll be luckier than we were if you decide to go some year. 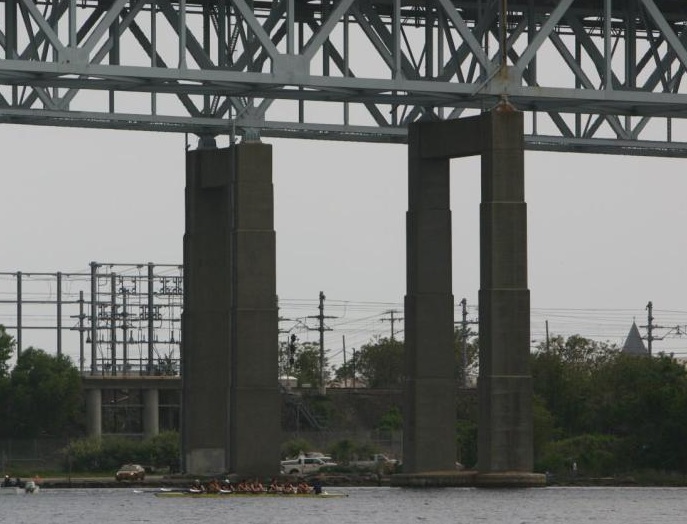 Here’s an “official” shot of the main race towards the spot at which we were at to take the picture above. Now I see what we saw nothin’ if not there at that very moment.

The Harvard-Yale Boat Race or Harvard–Yale Regatta is an annual rowing race between Yale University and Harvard University. First contested in 1852, annually since 1859 except during major wars fought by the United States, The Race is America’s oldest collegiate athletic competition, predating The Game by 23 years.

The Game, of course, refers to the Yale-Harvard football game.

Originally rowed on Lake Winnipesaukee, New Hampshire, it has since moved to the Thames River. Although other locations for the race have included the Connecticut River at Springfield, Massachusetts, and Lake Quinsigamond at Worcester, Massachusetts, the Thames has hosted The Race on all but 5 occasions since 1878 and both teams have erected permanent training camps on the Thames at Gales Ferry for Yale and at Red Top for Harvard. The race has been exclusively between Harvard and Yale except for 1897 when the race was held as part of a three boat race with Cornell on the Hudson River at Poughkeepsie, New York, where, although it lost to Cornell, Yale was deemed the winner of the Harvard-Yale race. 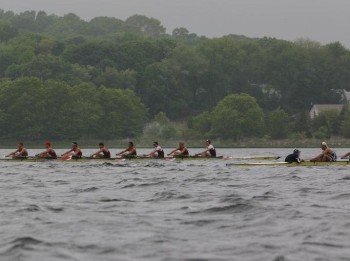 On May 24, 1843, with the arrival of the shell Whitehall in New Haven, Yale University founded the first collegiate crew in the United States.

Hey! There’s another US first to write about someday.

A year later, Harvard founded their boat club. These boat clubs served primarily a social purpose, until Yale’s 1852 issuance of a challenge to Harvard “to test the superiority of the oarsmen of the two colleges” The first Yale-Harvard Boat Race—and the first American intercollegiate sporting event—took place on August 3, 1852. In this two-mile (3 km) contest, Harvard’s Oneida prevailed over Yale’s Shawmut by about two lengths, with Yale’s Undine finishing third. The first place prize was a pair of black walnut, silver inscribed trophy oars. The trophy oars were awarded to Harvard by “New Hampshire’s favorite son” General Franklin Pierce who in 1853 became the 14th President of the United States of America. Today the 1852 trophy oars are the oldest intercollegiate athletic prize in North America.

If Yale ever wins this thing again, there’s another post! Although these oars aren’t passed back and forth I don’t think.

While the first race was held over 2 miles (3.2 km), this was extended to 3 miles (4.8 km) for the races through 1875, and has since been raced over 4 miles (6.4 km). The Oxford-Cambridge Boat Race is the only longer side-by-side rowing event in the world, though slower stream makes the Yale-Harvard Race one to three minutes longer.

The Longest Crew Race in North America? Is that post-worthy? Hmm… 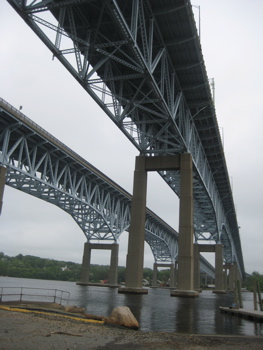 A note from this article: Harvard has won 22 of the past 25 varsity races here with Yale. (The Crimson have won 11 of the last 12 events.)

So there you have it – a recap of the history of an event that we somehow missed in New Haven. Harvard won again, by the way… And like I said, we made up for missing the regatta proper by checking out Nathan Hale’s New London schoolhouse museum.

Here’s an article about the mysterious event we somehow missed. This article will probably disappear soon too. Oh well. 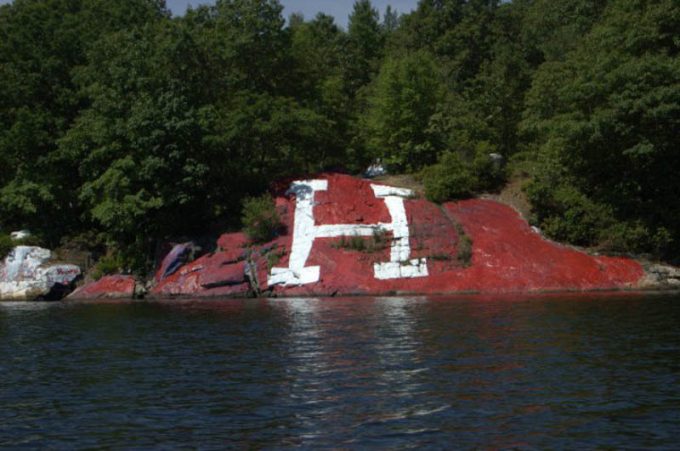 Connecticut sports and such