CTMQ > Everything Else > Houses, Communities, Libraries, & Businesses > The Oldest Seed Company in the US

I’m not sure they can call themselves “continuously operating” anymore because the store did close in 2009. However, it was bought by the awesome Baker Seed Company in June 2010 and was open again shortly thereafter. 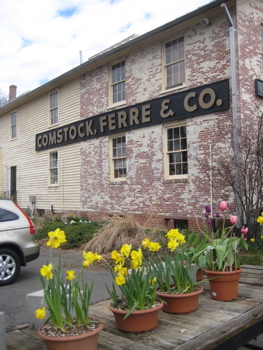 Damian has the week off from his little Early Learning Center preschool, so as a good dad, I’m taking him to various places and things every little boy wants to experience. Friday, it was The Holy Family Retreat Labyrinth. Today, we went to the oldest continuously operating seed company in these United States! I know! I’m expecting the call from the Father of the Year folks any minute now. 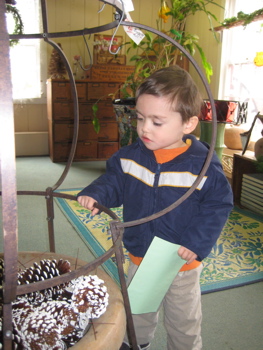 The store is situated in the heart of beautiful Old Wethersfield’s Historic district – the largest historic district in the state mind you. Not only is this a wonderful street for classic New England strolling, it’s also home to a bunch of museums like The Wethersfield Museum, The Hurlbut-Dunham House, and the Webb-Deane-Stevens House and Barn where Hoang and I tied the knot. Not far away are the Captain John Francis House and the Cove Warehouse Museum. Oh, there’s even more, but you get the point. 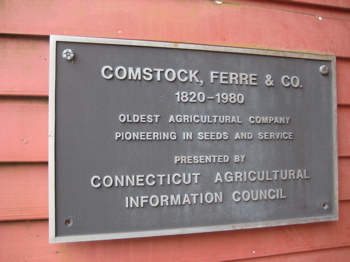 Unfortunately, the beautiful buildings are potentially going to be converted into more modern, supposedly more commercially viable businesses if the town has its way… But the locals and the local historical society are fighting it tooth and nail. Good. Because this place is pretty cool.

Old Wethersfield is a charming, historic Connecticut River town founded in 1634. Along Main Street are homes more than 200 years old, as well as the white- steepled Congregational Church that George Washington occasionally attended. This area is richly endowed with deep, fertile soil, a legacy from the glaciers and the annual flooding of the Connecticut River. As a result of this agricultural treasure, Wethersfield became in its early history a seed producing area. Comstock Ferre is part of this tradition. We are located in a cluster of antique buildings in the Historic District. 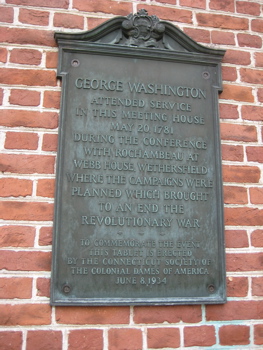 Comstock, Ferre is the oldest continuously operating seed company in the country. It was established in 1820 by James Lockwood Belden as the Wethersfield Seed Company. The original tin signs adorn the buildings to this day. In more than a century and a half of business, the company has seen several transitions from local garden supplier to wholesaler and back to a wider retail operation. The company was expanded when Franklin Comstock and his son William succeeded Belden and were later joined by Henry Ferre. William Comstock brought great innovation and growth to the seed industry. The Comstocks had contact with a Shaker village located in nearby Enfield. William adopted their idea of packing seed in ‘papers’ and developed the scroll border still used today on our herb packets. In 1853 the seed house was incorporated as Comstock, Ferre & Co. Customers who visit our store will find rows of old oak rocker bins and tin lined oak drawers which to this day hold our seed stock. 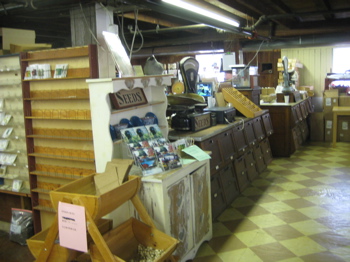 Stephen F. Willard began work at Comstock, Ferre in 1871 as a ‘traveler’ distributing commission seed boxes throughout New England . He was one of the founders of the American Seed Trade Association in 1883 and became its president in 1904. He served as Comstock, Ferre’s president from 1898 to 1924. At that time Comstock, Ferre grew many varieties of seed that were sold wholesale to other seed companies and distributors. Much of the seed was grown on the company farm in Wethersfield . The business was run by four generations of Willards through most of the 1900’s. In 1958 Comstock, Ferre began its retail seed business and garden center. 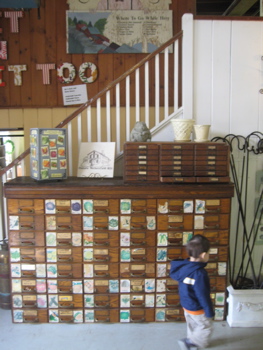 By the way, in the Ancient Burying Ground behind the Congregational Church across the street (the one that George Washington attended), there lies many Comstocks, Ferres and Willards. It’s also a Connecticut Freedom Trail site as well.

You see? You see now why Damian was so excited to go here?

“Here is the finest ride in America. A gentleman told me that there is not such another street in America as this one in Wethersfield… We went up the steeple of Wethersfield Meeting House from whence is the most grand and beautiful prospect in the world.”

Note: He also said that Middletown is the most beautiful town of all…” but those ellipses lead me to believe he went on to say, “the towns that start with M in Connecticut.” 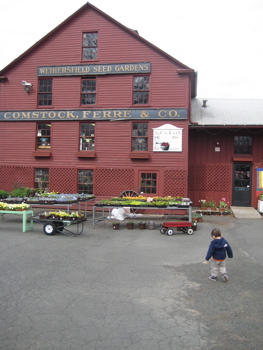