If you’re poked around this site a bit more than the average visitor, you may know that I am drawn to quirky and odd things that seem incongruous to me. I’ve written here and there about the various oddities in and around West Rock Park. 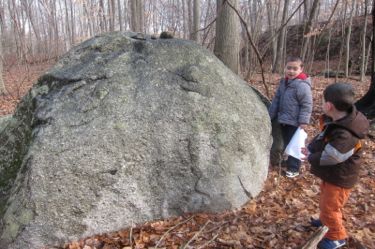 Things like the Regicides Trail that goes over the Heroes Tunnel along the Wilbur Cross. How the tunnel itself is said to be the only vehicular tunnel through a land mass in New England. The nearly useless but well-intended fish ladder behind a strip mall. And, of course, the whole weird “move urbanity out to the base of the mountain and they’ll behave better” failed experiment of New Haven’s whole West Rock area.

So this weird little nature center fits right it. In fact, the New Haven run website claims, “The Center is believed to be the first urban nature center in the country.” Yes, yet another ill-defined and impossible-to-verify Connecticut first! 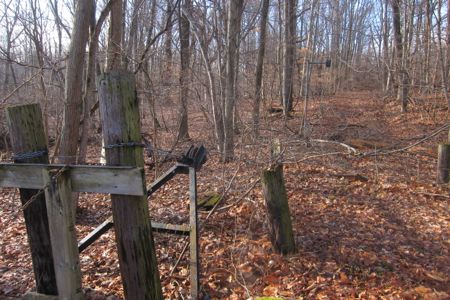 The buildings are nestled right next to the Wilbur Cross highway which sort of speaks to the whole “urban nature” thing right off the bat. It’s never open – like, almost literally never. It used to be open during the week, but now the information I can find for 2014 is that it’s only open by appointment. I’d guess it opens for school groups and such.

There used to be a zoo here, housing a mountain lion. And a ski run with tow-ropes was popular back in the day. What else? During our hike I saw two 20-somethings with mullets, bad acne, and a bong casually strolling down the entrance road. Fortunately, they were friendly and smiley – and probably eyeing Calvin’s bag of snacks. 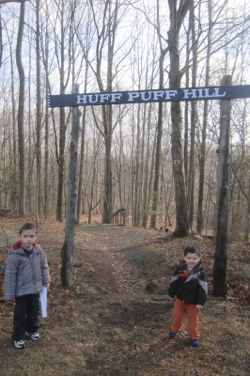 Oh yeah, the family of three who appeared to be living in their car at the access lot was a nice touch.

Father of the year, right here.

Since the center is never open, the road up to it is chained off as well. No matter, for we are intrepid hikers and merely trudged up the road to reach the trails. 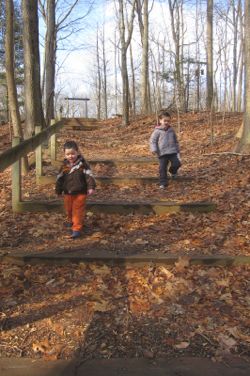 The Center’s grounds essentially consist of a few buildings on top of a hill, the hill and the floodplain at the bottom which is bounded by Wintergreen Brook. There are various obstacle course implements strewn about; some appear that they can be made fresh again and others have been abandoned. There appeared to be a zipline of some sort on the northern hill as well.

Keep in mind we visited in January, so who knows what this place is like in the middle of July. It wasn’t exactly run down, but … yeah, it was pretty run-down.

But the two blazed trails were cleared and blazed fairly well. (You can’t really get lost here anyway: Don’t cross the big creek and into the housing projects and just go up the hill towards the highway sounds if you are somehow and idiot and can’t find a trail.) There are a bunch of unmarked crossover trails that are on the map. I found most of them to be rather unkempt though. 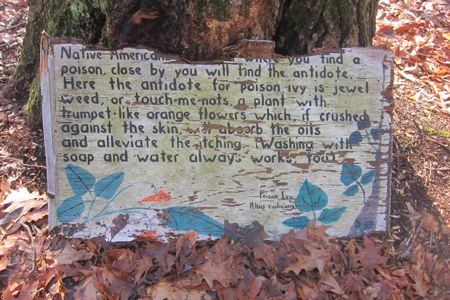 Yeah. A little run down.

And then there are the former ski runs, which are still cleared grassy areas.

We started by going down the cutely named Huff Puff Hill along the White Trail. There’s a sign and everything! As is typical, Calvin charged ahead of his brother, who remains a very slow hiker. He also needs to carry a map. Never mind that the map he’s holding in every pictures is for a completely different property. That doesn’t matter to him though. And it keeps him happy… which keeps me and Calvin happy. 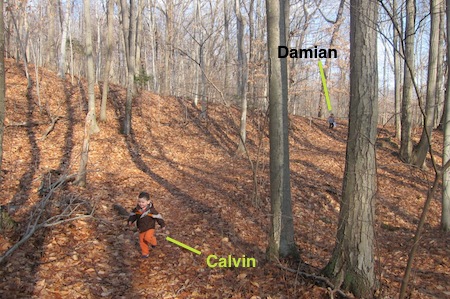 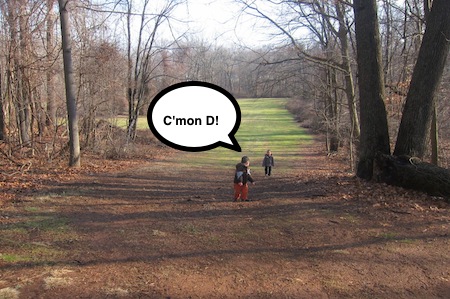 Their hiking speed is a bit different

I imagine the trail along Wintergreen Brook is a sloggy mess in the spring and after rains. Fortunately for us, it was either frozen mud or easily avoidable. Even for two boys who have different ideas about what it means to “avoid the muddy parts.”

Calvin seems to be a natural born hiker. He’s curious about things and likes to keep moving. Damian, however, is the opposite. His disabilities (intellectual and physical to a degree) make hiking a much more difficult endeavor. Throughout our time in the woods, Calvin constantly encouraged him with, “C’mon D!” and “Hurry up, D!” 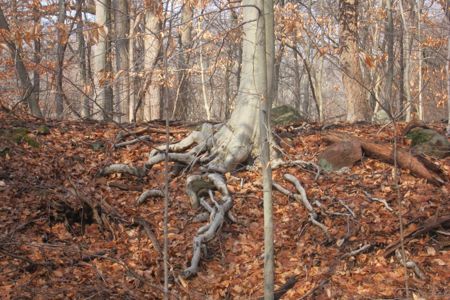 They determined this to be the “Octopus Tree”

As their father, it’s pretty cool, I must admit. Especially when Damian heeds his little brother.

Calvin navigated the rotting bridges and rock crossings over streams. Damian whimpered and asked for help. But he tried. He held my hand and gingerly made his way with me and once again made me proud. He’s getting there. 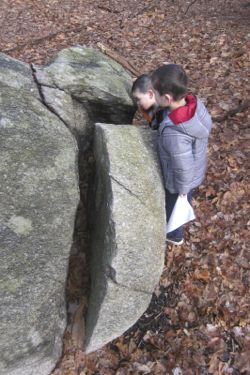 The White Trail becomes the Blue Trail at the far eastern side of the property. Near the switchover, there’s a cool glacial erratic with a clean split. This fascinated both boys – as it should.

At the bottom of the former ski run (machinery and evidence of the old tow lines still exists), we faced the uphill challenge to the top. Damian had already begun his “To the car! To the CARRR” pleas, so it was a good time for one last push. 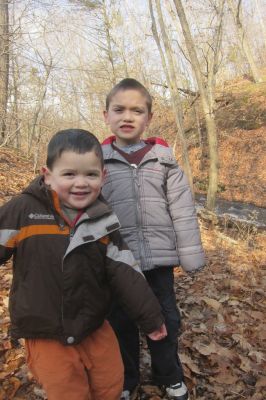 They both actually made it to the top in perfectly acceptable order. At the top, Calvin said he had to pee. Aha! Time for another milestone, son! Outdoor relief! He hesitated at first (if you think about it, it probably does seem totally weird to a little kid who has only been using a toilet for a few months) but then let it fly. Look at how proud (below)!

Upon arriving at home hours later, the first thing he told Hoang was, “Mama! I go pee on a tree!” Like I said earlier, Father of the Year. 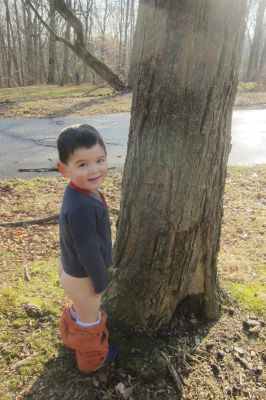 Afterwards, it was a simple walk past the buildings and back down the hill to our car. But before I had to go through the uncomfortable task of buckling in my kids with the car-family peering out at us, we detoured down the hundred-or-so foot trail to check out Wintergreen Falls. The trail isn’t marked, but it is on the map – and It’s easy to find at the back of the lot. 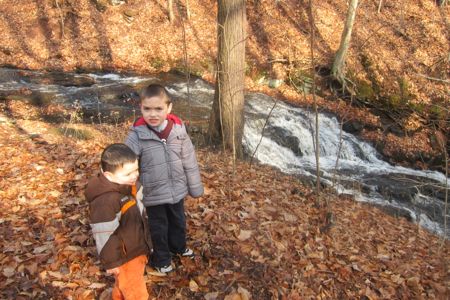 Not the best falls in the world and not the worst – but it did get its own Connecticut Waterfalls page. The boys actually posed a little bit for me there and then both insisted on trudging back up the hill themselves to the car. 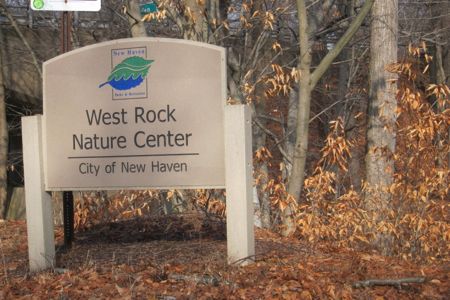