For Once, It’s Not My Fault
Wilsonville Fault, Thompson
June 5, 2011

2015 Update: This page got a TON of views in early 2015 as there were a lot of little earthquakes in the Quiet Corner. This inspired NPR’s Patrick Skahill to write a better page about this thing than I did. 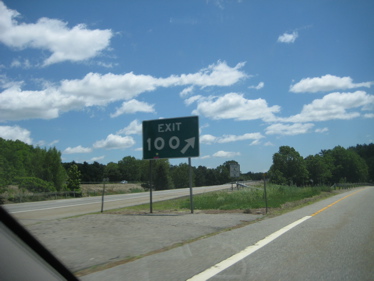 It’s funny that I bothered to post a date on this page just above. After all, the subject of this page has been around for a few hundred million years or so – and I don’t think it’s going anywhere. Long-time readers of CTMQ may know of my (very) amateur enthusiasm for geology. And while Connecticut doesn’t really have any show-stopping rocks or caves or geologic formations, we do have a few cool stories here and there.

This is one such story.

Next time you’re tooling down I-395 from Massachusetts, take notice of the rock cuts right at exit 100 in Thompson. Oh sure, you’ve seen rock cuts all over the state and you’ve noticed how some look a little cooler than others, but THIS one is very unique. So slow down, get off at 100 in order to collect yourself and think about the following story that I see no reason to recap – only very slightly edit:

By Charlene Perkins Cutler
For The Norwich Bulletin

…[The area is] also composed of two ancient continents and is the site of the collision of those two continents.

Last year at the Woodstock Fair, Gary Jones kindly passed along an article from the Windham County Observer from 1990. It was written by John Plouffe, of Webster, MA and reminds us of The Last Green Valley’s ancient beginnings. It stirred my memory of Avalonia and a conversation I had with Ralph Lewis, now retired Connecticut state geologist.

[CTMQ Notes: This area up here is known as “The Last Green Valley” and refers to the amount of forests that still cover the swath – the only such swath in Megopolis. Oh, and Wilsonville is a small section of Thompson.] 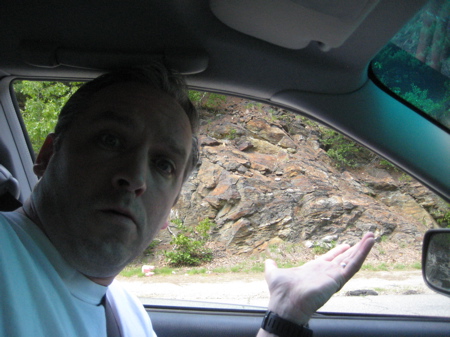 What?! It’s not my fault! It’s Wilsonville’s!

There was a time about 300 million years ago when about half of The Last Green Valley wasn’t here. The shoreline ran from Thompson — Wilsonville to be exact — on the diagonal southwest to a point near Willimantic. To the east, just off this ancient coast, lay what would become Spain and the continent of Africa. It was a world we would never recognize today.

Confirmed in the 1960s by the field of plate tectonics, we now know Wilsonville was part of the North American continent on one such plate that was sliding very slowly westward. Spain and Africa were on a different tectonic plate moving ever so slowly east.

Eventually, the east-moving plate drifted well away from North America. But in the void that developed, a new presence appeared from the southeast — a continent geologists now call Avalonia. It was small by modern day standards for continents, estimated by Plouffe to have been about 50 miles wide and 1,000 miles long with subtropical features that distinguished it from North America.

And Avalonia kept coming closer to Wilsonville until it stopped, smacked up to the Wilsonville shoreline and filled in some of the geographic area of Connecticut, Massachusetts, Maine and the maritime provinces of Canada. The diagonal line formed by the collision is one of the oldest fault lines on Earth — the Lake Char Fault.

So where did this drifting continent come from? Avalonia developed as a volcanic area that broke off from another Paleozoic land mass. As it drifted, parts of it collided with and became attached to other lands. A long narrow part collided with New England and Canada. Another portion ended up attached to present-day southwestern England, 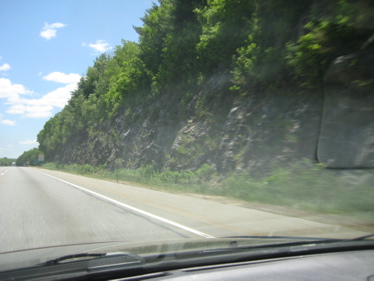 Wales, and southeastern Ireland. Other parts became attached to western and northern Europe. The name “Avalonia” was inspired by the Avalon Peninsula in Newfoundland.

How do geologists know Avalonia crashed into Wilsonville? The evidence is in the rocks. The rocks that existed in Wilsonville before the collision are arranged in layers. Where Avalonia smacked into North America the rocks are distinctly different, standing nearly vertical in spots. The exposed rocks one can see near Exit 100 off Interstate 395 are approximately 500 million years old but they have only been in Wilsonville for 300 million years. Exit 100 is on the ancient Lake Char Fault line. Lake Char Fault runs from Old Saybrook northeast through Wilsonville, across the middle of Webster Lake on a line straight out into the Atlantic at Newburyport, Mass.

[CTMQ Notes: The earth is apparently more than 6,000 years old.]

The precise boundary of the old continent of Avalonia has also been confirmed by biologists. The 500 million-year-old rocks from Avalonia contain fossilized trilobites. Trilobites are primitive forms of life. The ones found in Wilsonville are unique to Avalonia and are only found at its other collision sites.

So, The Last Green Valley is made up of the old North American continent north and west but also of the “new” continent east and south.

So there you have it, geology fans. Rock and roll.