Yeah, okay… I’m not sure how I’m to take a picture of a “District.” So I’ll grab a satellite image. I can report I drove all around here looking for the CT Underground Railroad Trail and Middletown Heritage Trail’s Freedom church. 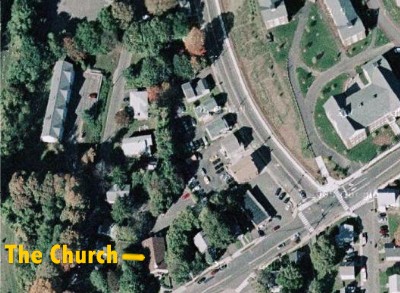 The first known residential subdivision in the state (1847) to have been laid out by a free black man for black homeowners, the Leverett Beman Historic District occupies a narrow triangle of almost five acres. The neighborhood today consists of 18 houses built between c. 1840 and 1959 and includes the Cross Street A.M.E. Zion Church.

Middletown is crazy. Across the street from this cemetery is the Indian Hill Cemetery which is on the Middletown Heritage Trail. And right next to it is the Washington Green – also part of that trail. But thanks to the Freedom Trail folks for hooking me up with the handy dandy marker as seen here. 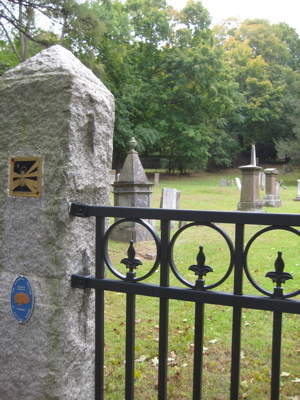 To the rear of this cemetery are the graves of local African Americans, including Fanny Beman, the mother of Amos Beman, one of Connecticut’s best known African American civil rights leaders of the nineteenth century. There are also graves here of men who fought in the Connecticut Twenty-Ninth Regiment and other African American units of the Civil War. Among them is James Powers, who is listed on the Civil War monument located on the green at South Main Street near the Benjamin Douglas House.

Of course, the Civil War Monument is on the Middletown Trail and the Benjamin Douglas House is part of the Underground Railroad Trail. You can see how I had so much fun in Middletown one day, huh?