Next time I’m in Norwich, I will take some newer photos of these falls. I promise.

As I’ve written in the past, Connecticut is not home to too many impressive waterfalls. The few noteworthy ones we have won’t wow many people from out of state… Unless they’re from, say, Delaware or something. Here, there’s a nice little park next to the falls and a bridge crossing over the top. There’s a multi=use trail that begins here as well. It’s a really, really pretty area. 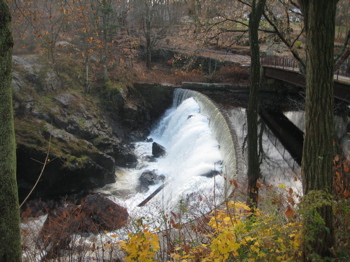 But the thing about Connecticut is that being an old state with a rich history, lots of our beauty spots have a cool story attached to them. Yantic Falls is one such place to be sure.

If you don’t know, there seems to be a “Death by leaping” legend to just about every waterfall and river cliff in Connecticut. We even have a Lover’s Leap State Park. At least the legend here at Indian Leap is cooler than the swishy love stories I’ve written about in the past. 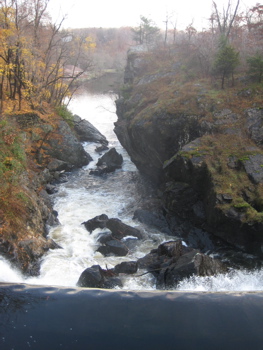 That’s pretty rad. Now, the chasm is about a hundred feet wide so I don’t know why those crazy Narragansetts thought they could make it, but perhaps there’s more to this story? (A story which, as you remember, was sort of played out in the movie version of James Fenimore Cooper’s version of Uncas’s life in “The Last of the Mohicans.”)

From my friend Linda from her dormant “Are We There Yet” blog:

As the story goes, Miantonomo, sachem of the Narragansetts, led 900 of his warriors in what was to be a surprise attack on the Mohegans at Shetucket, the Mohegan capital. The night before the battle, Mohegan scouts in the area observed the advancing enemy and carried the intelligence back to Uncas who formed a plan.

Uncas knew he didn’t have enough warriors to battle Miantonomo but he was a brave chief and would die for his people if need be; if one man could save many then he was willing to make that sacrifice. He told his braves that he would ask Miantonomo to fight one-on-one and if Miantonomo refused, he would drop to the ground as a signal for them to fire arrows into the enemy and then charge them hoping that the surprise would give them the advantage against the higher numbers.

Chief Uncas met the Narragansett chief between the lines of battle in the area that is now known as East Great Plain and appealed to him to prevent blood loss between both tribes by a single combat between the two leaders instead. When Miantonomo contemptuously rejected Uncas’ proposal, the Mohegan chief immediately dropped to the ground and the Narragansetts were met with a hail of arrows before Chief Uncas jumped to his feet and led his brave warriors in a charge. 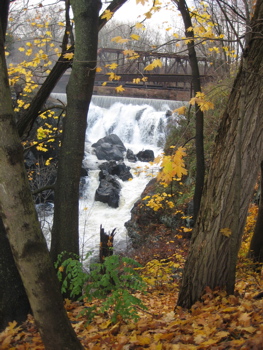 Caught totally off-guard, the Narragansetts ran from the charging Mohegans with some fleeing along their familiar route while others, unfamiliar with the territory, unknowingly reached the high treacherous cliffs of Yantic Falls . Rather than surrender, Miantonomo leapt across the gorge and managed to land on the other side, injuring his leg in the process. Others of his tribe attempted to leap the chasm but were unsuccessful and plunged to their death onto the rocks in the abyss below while others simply surrendered and became prisoners of the Mohegans.

When the pursuing Uncas arrived at the top of the gorge and saw his enemy hobbling away on the other side, he took a running start, flew over the rapids, and landed safely on the other side. It was an astounding leap that gave the area above the falls its future name and allowed Uncas to catch up to the injured Miantonomo who was then easily overcome and taken as prisoner.

Miantonomo was executed and buried in Shetucket, where a marker stands today. But he didn’t live in Connecticut, so we don’t care about him. We’re all about Uncas – who happens to be buried here in Norwich. 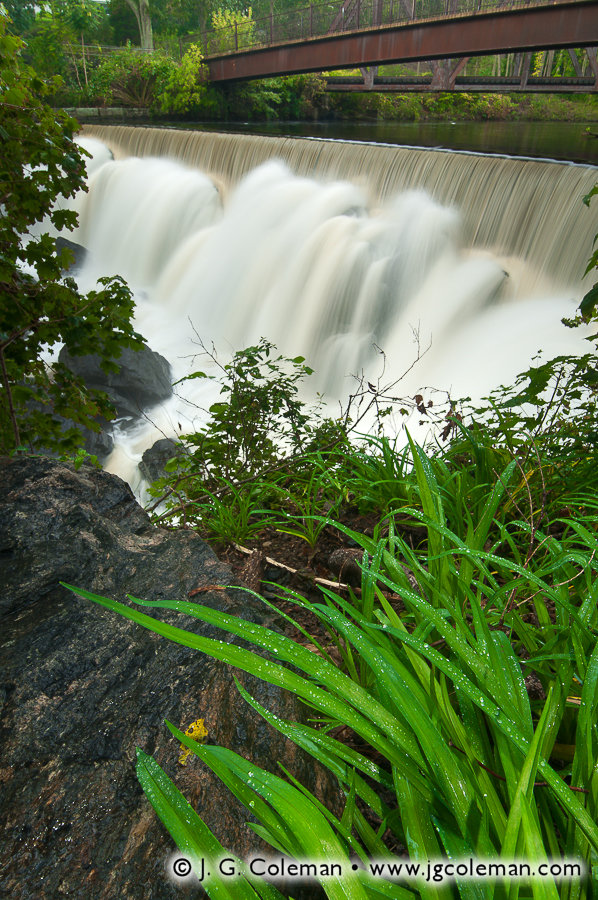 Obviously not my picture, but rather, Justin Coleman’s professional shot.

The mills harnessed the falls and it’s now sort of half natural, if you know what I mean. The top is clearly a dammed up portion but after falling a few feet, it appears to be the original natural falls. For me, it’s the gorge below the falls that makes it special; something very rare here in Connecticut. 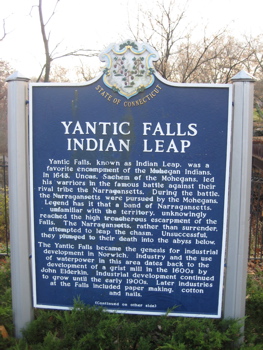