Are You Peregrinning at Me?
Fairfield (Google Maps Location)
June 13, 2009 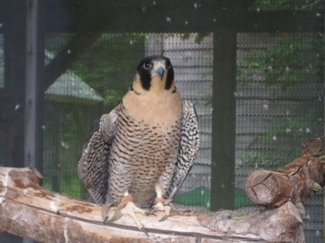 “Happy Holidays! Merry Open House Day!” Why does everybody look at me funny when I shout that out on the second Saturday of June every year? After all, Connecticut Open House Day is one of the greatest days of the entire year. What is wrong with people?

At least my friends Rob and Yvonne understand the importance of the momentous annual event. They trained it up from Brooklyn to Fairfield for over six hours of CTMQ’ing with me – and this wasn’t even their first time. And won’t be their last – by the way, thanks guys for being so kind as to schedule your June ’10 wedding later in the month, purposely avoiding the second Saturday. It would have bummed me out to have had to miss your wedding because of free entrance into some far-flung museum I’ve yet to visit. 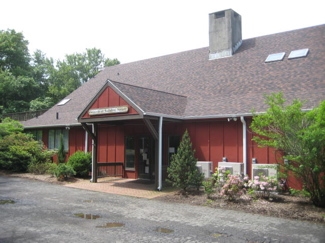 (Open House Day in 2010 will be on June 13th; tons of museums are free and/or have special interpretive programs and then the best thing is that some museums are ONLY open on Open House Day. The total CTMQuop de grace.)

After collecting my partners for the day at the train station, we embarked on an ambitious day of traipsing around Fairfield and Norwalk. We had eight museums to get to, plus three “best of” food items and a few other curious stops along the way. My schedule and itinerary was set and firm – no time to chit chat, it was off to the Audubon Center of Fairfield, which opened at 9 AM. Oddly enough, last year’s Rob/Yvonne day included a stop at the Coastal Audubon Society museum in Milford. Perhaps we’ll hit the one in Greenwich in 2010. 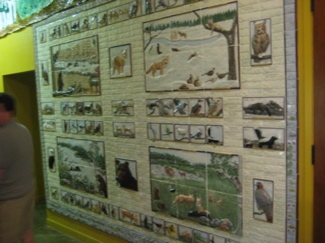 (By the way, there is another Audubon museum in town – the wholly separate Audubon Birdcraft Museum – but it was strangely closed on this day. Open House Day. The Best. Day. Of the year.)

Located in the historic Greenfield Hill section of town, the Connecticut Audubon Society Center at Fairfield was constructed in 1971 and adjoins the 155-acre Roy and Margot Larsen Wildlife Sanctuary. The Sanctuary, open dawn to dusk year-round, features rolling woodlands, meadows, streams, marshes and ponds with raised boardwalks and bridges that allow access to a variety of habitats, 7 miles of trails including the Chiboucas Wheelchair-accessible Trail for the Disabled, observation platform, interpretive signage and an Algonquin wigwam replica.

But first, we went inside the interpretive center to see if this center differentiates itself from all the others around the state. 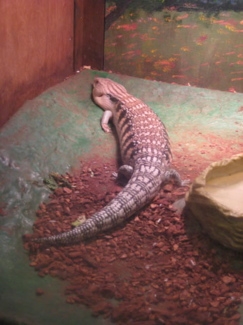 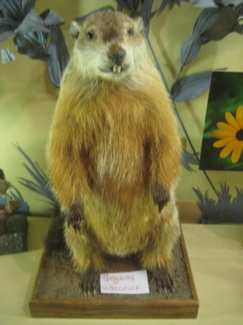 The Center provides an indoor setting for interpretation of the Sanctuary and serves as the hub of youth and adult environmental education programs and activities throughout the year. The Center features live education animals and other nature-related exhibits and, from late spring and throughout the summer a Butterfly Garden. Farm Pond (right 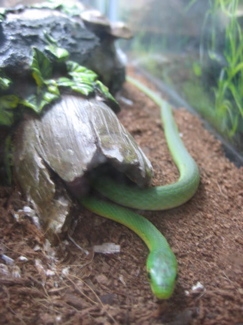 behind the building) is a great place for spotting frogs, turtles and ducks. Our “Birds of Prey” Compound is home to a variety of owls and hawks, two Peregrine Falcons, a Turkey Vulture and other raptors.

Whoa! Slow down there, cut-and-pasted paragraph… We don’t want to get too far ahead of ourselves.

We entered the building and seemed to have disturbed those inside. Granted, we were the first visitors of the day and we didn’t have any little kids with us, but so what. Rob is a big fan of birds and I think is or at least was an Audubon Society member. Welcome us! (But then kindly leave us alone so I can take a bunch of bad pictures.)

The Fairfield Center is a bit larger than most of the others, but contains most of the same stuff. The layout, however, is very unique in that there are a bunch of little rooms all over the place and it’s a bit maze-like. There is (or was during our visit) a giant mural on the wall in the entrance room. 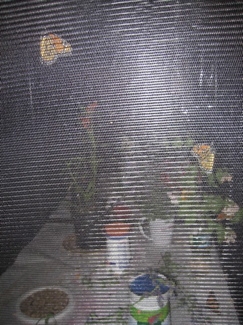 It’s pretty cool. The installation spans an 11 foot wall and was designed by local artist Marion Grebow. The mural depicts nature and the four seasons. If you’d like, you can sponsor a border tile for a couple hundred bucks to have your name or business proudly stuck on a tile on a wall in the lobby of the Fairfield Audubon Center. Go for it. I think CTMQ should get one gratis.

As with almost all of the Audubon Centers, their focus goes beyond just birds. Oh sure, there are interpretive displays with birds and stuff, but the usual reptilian and amphibious suspects were also lurking about. A giant skink randomly plopped in a cage in the lobby. A beautiful green snake in the next room.

I felt the set-up in Fairfield was a bit haphazard, but that’s okay. They have the standard giant tree cross-section with important events in history marked off (a nature center staple). They had two large flat screen television screens hanging on walls (a strange consistency at CT Audubon Centers, as you can see here). We also found a large cage of butterflies on a lone table in a giant hall which much hold meetings and such. I suppose they hatched them from cocoons and would be releasing them soon out to their butterfly garden, but it did strike us as a bit odd that they were cooped up in a cage. 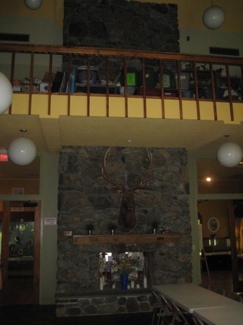 The giant rooms is really quite handsome. A large buck stag head looms above a huge stone fireplace and I immediately wanted to have a meeting there. Just off the room is a small thriving greenhouse, which Yvonne seemed to like best of all. As a vegetarian, she wasn’t too keen on animals in cages. Pshaw, I contend they are well cared for and doing just fine. In fact, Yvonne, their website states, “Our Center is home to many different animal species and our staff and volunteers are dedicated to providing the finest care possible for these “Wildlife Ambassadors.” All our animals are in some way unable to survive in the wild, either because of permanent disabilities or because they were raised as “pets” and never learned to hunt for their food. Our Education Animals are a very important part of our environmental education and conservation programs and they are treated with the utmost respect. Therefore they must be cared for by well-trained, dedicated and caring volunteers.” So there.

Anyway, the greenhouse features a sensory garden which I something I learned about up at Westmoor Park in my backyard. It’s a pretty cool concept which adds all the senses beyond sight for kids. I like it. 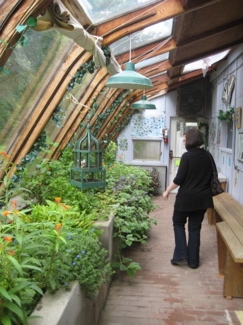 We wound our way back through the maze to the lobby area and headed outside. While the displays inside were perfectly fine and fairly interesting, the Live “Birds of Prey” Compound is the real draw here. I have had an interest in raptors for as long as I can remember and still slow down to look at the red-tailed hawks that are now on every light post in the state it seems. The birds here are all injured but still remind us of how powerful and beautiful they are. 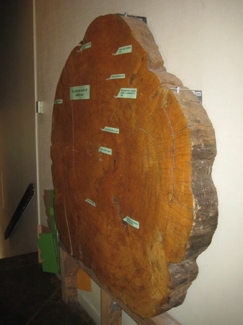 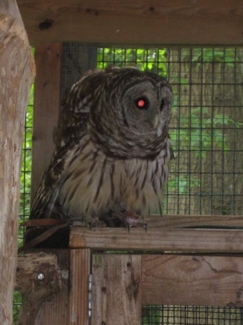 We slowly walked around their outside cages in relative silence, enjoying the chance to see turkey vultures and Peregrine falcons up close. Such a noble bird, the Peregrines are. There are also a few different kinds of owls here too and they all seem to have plenty of space to live out their lives as well. 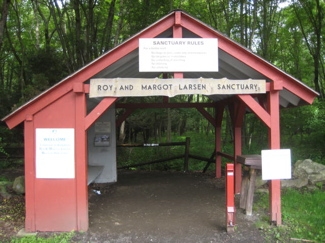 As we returned to my car, we checked out the trailhead leading into the 155-acre Roy & Margot Larsen Wildlife Sanctuary. They Society asks for a donation to hike their trails, which is fine by me, but I’ll have to return some time in the future to hike around their 7 miles of trails. I hadn’t accounted for that in my schedule for the day – but I must note that it’s cool they have built a wheelchair accessible portion of trail as well. Always a good thing.

How did Fairfield compare to the others I’ve been to (Glastonbury, Pomfret, Milford)? I never answer that question because although they are all very similar, they each have unique qualities and settings to set them apart. But I will say Fairfield has the best live raptor exhibit – but then again, Milford has a bunch of osprey viewing platforms which is really cool too. Eh, why don’t YOU explore these places on your own and form your own opinion? 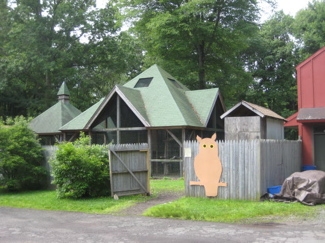