Ahhh, Wesleyan. Such memories I have of this fine institution of higher learning. Without delving too much into it, my high school girlfriend went to “Wes” as the cool kids call it and I attended UConn a ways north. It is an interesting school to be sure with an interesting and eclectic student body. I was always under the impression that there were two types of students here: The really smart ones interested in a top notch education and the other ones with a lot of money interested in drum circles and Peruvian change purses. (Suffice it to say, my friend was firmly in the former’s camp.) 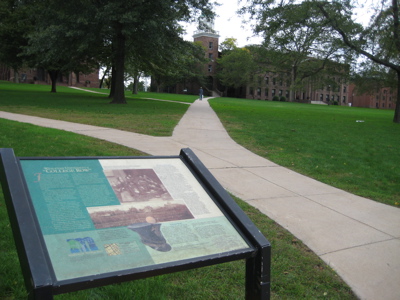 Wesleyan was founded as an all-male Methodist college in 1831, but didn’t require attendees to be Methodist. The list of impressive alumni blows away UConn’s and is on par with that silly little school down in New Haven called Yale or something. But to focus on why this place is part of the Heritage Trail, we’ll focus on a couple tidbits from Wikipedia.

In the 1840s, Wesleyan was already beginning to make a reputation for itself both for the abolitionist sentiments of its students. Heck, a black student enrolled in 1832(!), but the first didn’t graduate until 1860 – still rather ahead of the times. 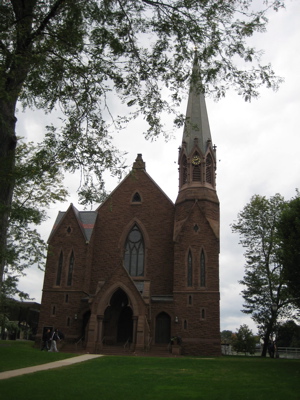 In 1872, the University became one of the first U.S. colleges to experiment with coeducation by allowing a small number of female students to attend, a venture then known as the “Wesleyan Experiment”. Because of the preponderance of female students preparing for college in that period, some of Wesleyan’s alumni believed that opening the door to coeducation would eventually result in the student body becoming entirely female. Given that concern, Wesleyan ceased to admit women, and from 1912 to 1970 Wesleyan operated again as an all-male college. Wesleyan’s decision to stop admitting women subsequently helped lead to the establishment of all-female Connecticut College in nearby New London, founded by Wesleyan alumnae in 1911.

Now that’s interesting; I had no idea. I also found the following paragraph fascinating – Note, Bill Belichick is a Wesleyan graduate, as is the recently fired Jets coach Eric Mangini.

In the days before the invention of the forward pass, Wesleyan was a leader in the development of football as a college sport. For a little more than a decade, Wesleyan fielded teams that played against Yale, Michigan, and Harvard. However these much larger schools eventually were able to far outstrip Wesleyan, and one game, where Wesleyan lost 136 to 0 to Yale (still a record loss in the Northeast), proved that Wesleyan could no longer compete at that level. However, in their only meeting in history in 1883, Wesleyan beat Michigan 14-6.

They should play again next year*… Wesleyan might have a shot again. (Actually, I used to go watch them while my friend would dutifully study. They were no better than my high school team.)