I drove the family all the way to Sherwood Island beach in Westport for three reasons: 1) It’s a nice enough beach, 2) It has a nature center and 3) it’s part of the Impressionist Art Trail Viewpoint Addendum Trail thing. It also claims to be CT’s oldest state park, something I just read on Redding’s Putnam Memorial State Park page. I’ll sort that out later. 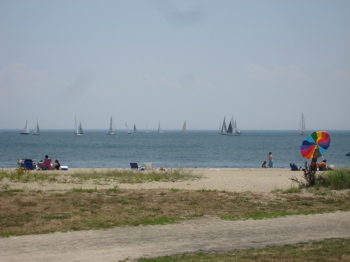 Sherwood Island is hardly an island in the classic sense. It seems to be separated from mainland CT by a marsh and perhaps it was more of an islandy island before humans built up the roads and buildings near it.

It’s a very nice little beach; though the sand’s slope is pretty drastic and the rocks and shells under the shallow water create a bit of pain for anyone walking out more than ten feet.

But I’ll write more about that over on main Sherwood Island pages. For now, let’s talk about how I scooped up an ornery Damian for a walk over to the Viewpoint. It sits on a small bluff beyond the main pavilion and looks out over some sand, some shoreline grasses and out into the Long Island Sound. It’s pretty nice, but not really unique from anywhere else along the Sound in the state. 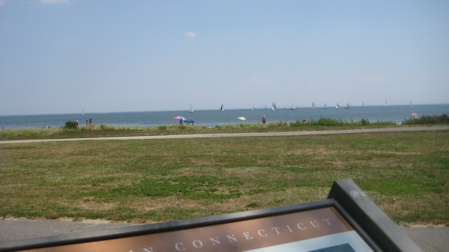 (The following text is from the sign at the Viewpoint.)

White dresses, hairbows and dress shoes would be ridiculous beach attire for females today, but when Edward Potthast began painting beach scenes in 1910 people enjoyed the shore in clothes better suited to a city street. Thirty years earlier, an even greater formality of dress and demeanor had been the rule. Men had appeared in frock coats and top hats, and corseted women trailed long skirts through the sands. American attitudes toward recreation underwent significant changes as the 20th century approached. 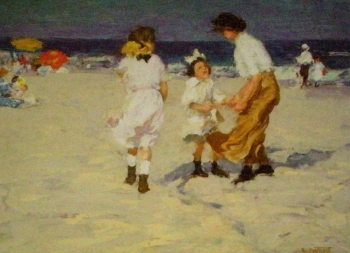 Potthast’s “modern” females revel in the sunlight and ocean breeze. His sketch-like view of the central figures, seemingly caught in mid-motion, conveys their pleasure in the moment. Broad brushstroke enhances the air of vitality, and touches of bright color animate the scene still more. American Impressionist art, usually intimate, sunny and colorful, celebrates the smiling aspects of nature and often, too, the bond of familial love, especially that between mothers and children.

Edward Potthast wasn’t a CT boy and never even lived here, so I won’t go into detail about him. (And besides, these viewpoints are presented merely for illustrative purposes, as an example of impressionism done at five CT locations.

And you know what? Impressionism doesn’t move me. I can appreciate it, but… meh. However, in my Potthast research I came across this rather awesome video that explains how the Santa Barbara Museum determined a Potthast to really be a Potthast. 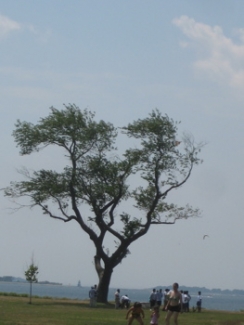