Remember back in the day when I started this website? Damian was a wee baby, Calvin not yet a twinkle in my eye, my hair was dark and my abs were taut. 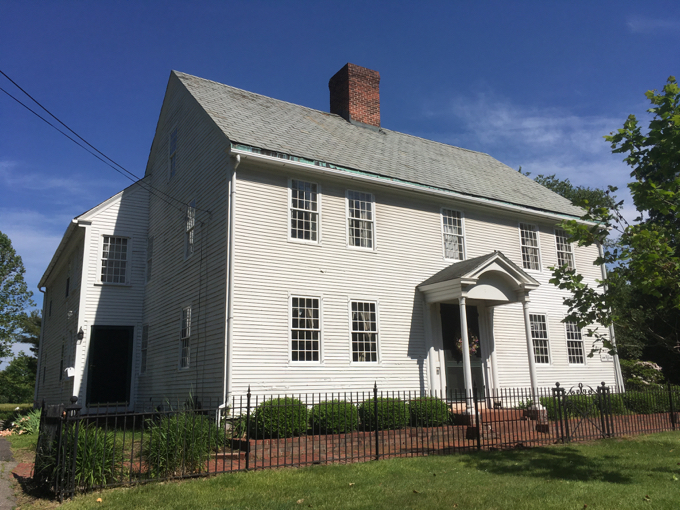 Well, the first two things were true anyway. Yeah? And remember how back then I used to have to deal with – and find ways around – that vexing museum policy of “no photographs?”

Museums seemed to all pretty much come to understand that photos don’t damage their collections and I hadn’t seen a “no photos” sign in half a decade.

Until the Martha A. Parsons House Museum on Enfield’s historic Enfield Street. My 355th museum in Connecticut. 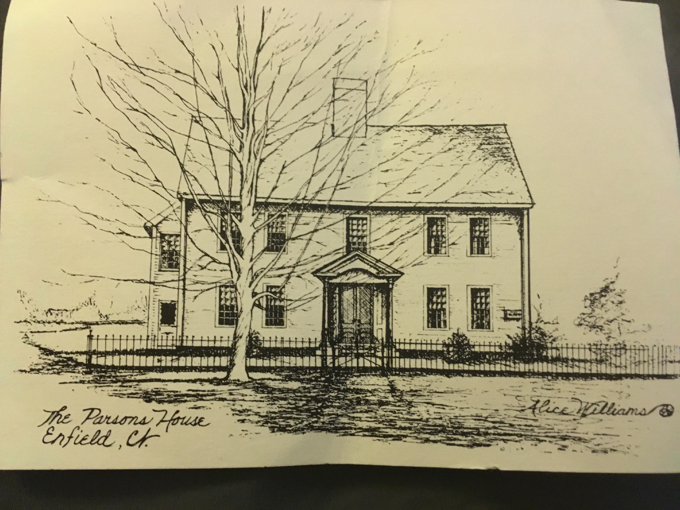 Parsons postcard given to me at the Old Town Hall Museum up the road.

I didn’t actually see any signs, but the highly attentive (and very pleasant) tour guide gently admonished me for taking a picture of… a bed. And its “crazy quilt.”

And so, without further ado, here is my one beautiful picture from the Martha A. Parsons House Museum of Enfield, Connecticut on the 11th day of the 2017th year since the birth of our Lord, Amen: 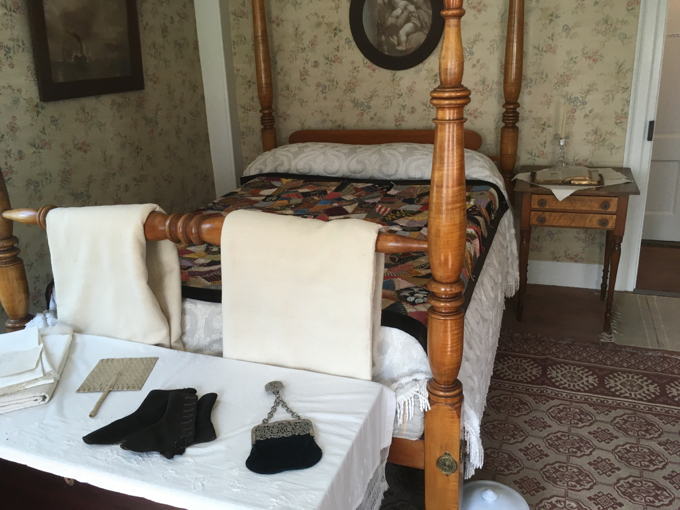 This is a nice bed.

I apologized and put my camera away.

(Yes, I most likely could have explained who I am and what I do and who knows if that would have changed anything, but that’s not my style. I try to experience everything I do as anyone would. So I respect their rules insofar as I took no more pictures. It was just a bit jarring having just come from the Old Town Hall Museum one minute away, with much the same collections, and having taken 100 pictures.)

The docent seemed slightly embarrassed about the situation, and mumbled something about it being “a security issue.” As in… ? I joined the little tour (with one other woman) of this 3rd tier house museum in order to document each room via iPhone photos with the intent to rob the joint later in the dark, having memorized the layout and placement of everything, including the laser sensors, so I can navigate it without using a light source with the ultimate goal being to score a little stool made by a Shaker one hundred years ago?

I guess. I’ve been foiled, darnit. 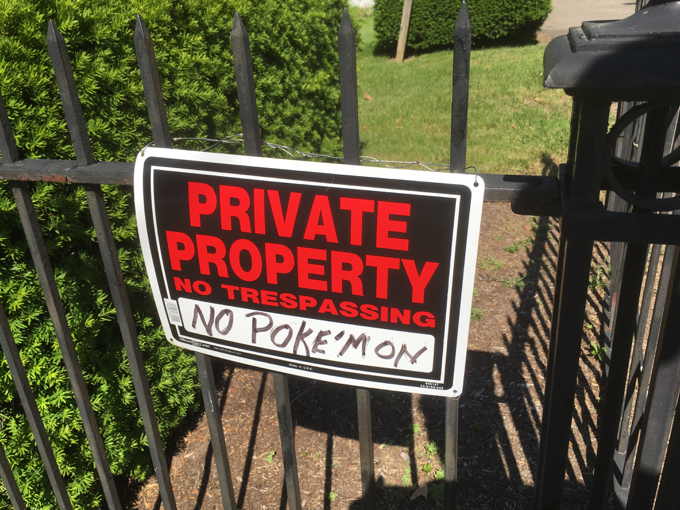 And you can’t Poke’mon here either

So you know what I’m going to do? I’m going to a) steal a few photos from elsewhere, preferably the Enfield Historical Society and b) copy and paste their descriptions of the house museum.

Here’s an interesting tidbit – the EHS and the Parsons House Trust Foundation filed lawsuits against each other less than a decade ago! Juicy stuff!

The museum portion of the house is only half the house, as it adjoins someone’s current residence. I had to ring a bell to gain entry, as the tour group of 1 was in another room and they lock this place up tight, even when present.

Indeed, Martha A. Parsons security it tight. Don’t even think about robbing this place.

I was pressed for time, but got the full tour of the entire upstairs – where, in case you missed it, there’s this bed with this so-called crazy quilt:

That is a nice “crazy quilt”

It’s a nice bed. In fact, the whole house is quite nice, especially for one built in 1782! It is much brighter and airier than most other houses from that period, that’s for sure.

The Parsons House, as it is now known, was built in 1782 by John Meacham on land assigned for use by future “parsons” (ministers). At one time, the house was called “Sycamore Hall,” for the row of sycamore trees that lined the street. The present name, however, is the result not of the house’s intended use, but of a charming coincidence: the last family to occupy the house was named Parsons.

That’s pretty neat. Like if I lived in a wood house and did something worthy of a museum and my wood house became a museum called the Wood House. 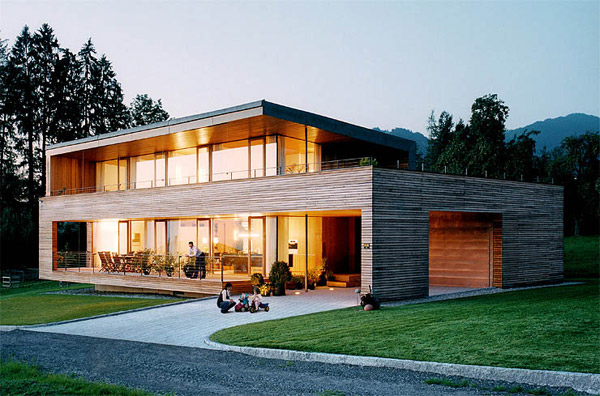 In 1800, John Ingraham, a retired sea captain from Saybrook, Connecticut, purchased the house for his family. It was he who decorated the front hall with the famous George Washington Memorial wallpaper, which remains intact.

More on that wallpaper in a second. The Ingraham family through births and marriages and such enlarged the house and it ultimately ended up with the Parsons family and, of course, Martha. She gave (I think?) the joint to the Enfield Historical Society in the 1960’s. As I mentioned, someone lives in the ell today. 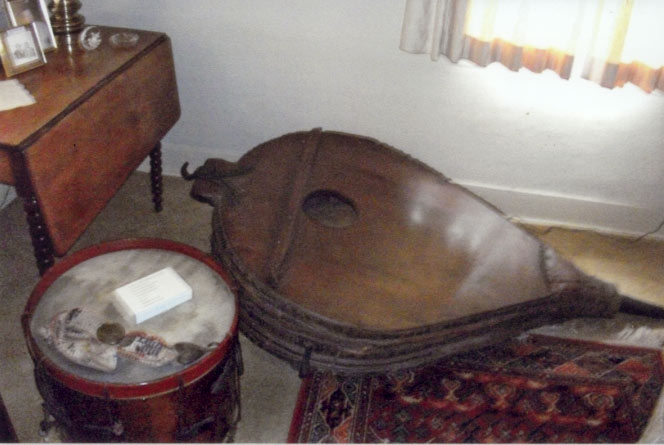 Giant Shaker bellow. We did have a fun conversation about the inanity of the Shaker life From CT Old House

Martha A. Parsons lived from 1869 until 1962 – entirely in Enfield. She was a tough cookie, and a feminist before such a word existed. In fact, she landed a job at Landers, Frary & Clark in New Britain and became the secretary of the corporation, which was pretty nuts in 1912. Martha signed her mail “M.A. Parsons” so other companies wouldn’t know they were dealing with a woman.

Okay, so you want to learn about the George Washington Memorial Wallpaper from 1800 that adorns a hallway wall on the second floor. It’s lovely. I swear. I saw it. It was right outside a bedroom that had a bed in it. On that bed was a crazy quilt:

I love this bed and quilt combination

Sorry, no picture of the wallpaper. My guide, who again was quite wonderful, poked fun at the notion that this wallpaper was 100% genuinely whatever they claim it as and also that it is so super duper rare.

My touring mate noted that the Phelps House in Suffield brags about their super duper rare and fancy old wallpaper too, and we all had a good laugh. I mean, not in a mean maniacal way, but rather a, “oh you silly historic house museums, always doing what you do” way.

This wallpaper was the original #MAGA paper:

An advertisement for the wallpaper proclaimed “[as the wallpaper is created] to perpetuate the Memory of the Best of Men, is the production of an American, both in draft and workmanship, it is hoped that all Americans will so encourage the Manufactories of the Country, that Manufactories of all kinds may flourish, and importation stop.”

The printed Enfield Historical Society brochure that I picked up at the main town museum up the road (yes, I do read those things) claims this to be one of only two enduring examples of George Washington Memorial Wallpaper in the US. The other one is in Burlington, Vermont. 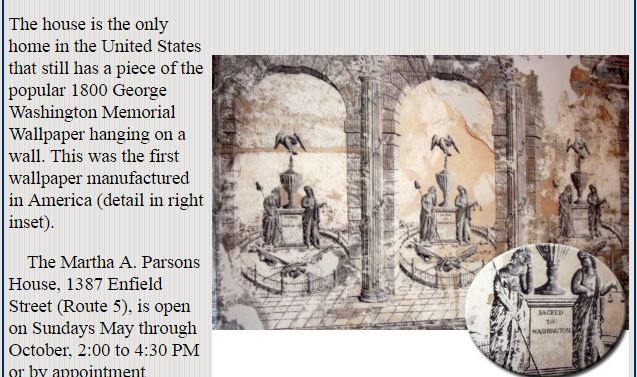 Here’s what the wallpaper looks like except in real life it’s bluish. From CT Old House

However, another brochure (this one’s glossy!) says, “This is the only home in the United States with this important piece of American history remaining on its walls.”

Anyway, I wonder if the Burlington folks would let me take a picture of theirs. (It’s just fancy/busy wallpaper with blue hue.)

The three downstairs rooms of the house are what you’d guess they are: kitchen, dining room, sitting room. Says the House:

No amount of money could buy a collection of antiques that has more meaning to a community than the lifetime accumulation of a prominent local family. With only a few historically important additions made since Martha A. Parsons’ bequest, the collection displayed within the walls of her house reveals one family’s lifestyle of unpretentious simplicity and graciousness for over 180 years. 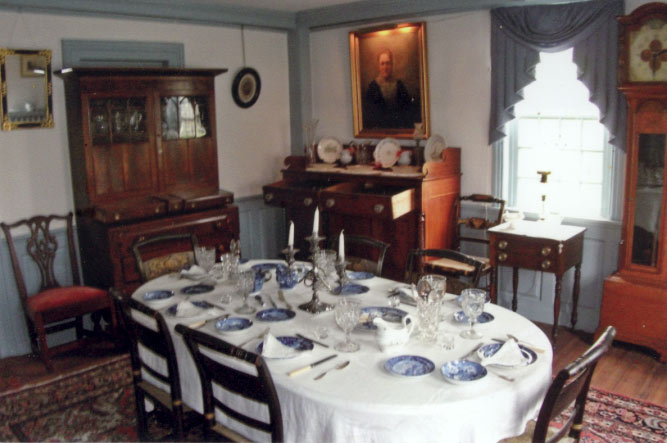 I could go on about highboys and chairs and desks that are really old, well-preserved, and much-loved. But these things exist in, literally, hundreds of other museums across our small state.

I don’t wish to belittle the collection or say it’s not worth your time – for it is! The house is beautifully maintained and it’s really cool that Ms. Parsons bequeathed it to the town.

And I don’t want you to think I’m actually sore about the photography policy. I’m not, really. While it is certainly unique these days, I can’t complain too much.

I got my story.