This is embarrassing. On many levels. First, some background: Way back at CTMQ museum number 4, the Butler-McCook House Museum, I was admonished for attempting to take pictures inside the house. The house is owned by Connecticut Landmarks (formerly the Antiquarian & Landmarks Society) and I was given the impression that they frown upon pictures inside their properties. 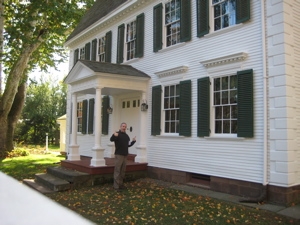 The Phelps-Hatheway House is also owned by Connecticut Landmarks (as are several other properties). For some weird reason I chose not to ask my excellent guide if I could take pictures and instead settled for – what you’ll see – horrible secretly taken-while-walking flashless shots of essentially nothing during my tour. I suppose it adds to the story a bit, but it certainly does this museum a huge disservice. 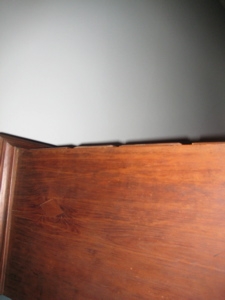 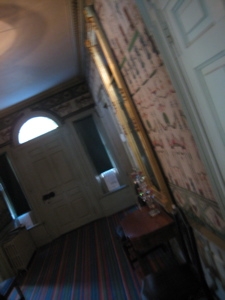 A month after this visit I gave a talk at the New England Museum Association conference where I met the very same gentleman who asked me not to take pictures at the ol’ Butler-McCook House. He remembered me and I remembered him. Handshakes and laughs ensued and I was told that I could very most likely take pictures in the properties now. Oh well, now I know. (A dinner invite also was put forth, but I’ve been slow on the uptake. Because I’m a social pariah that way.)

As CTMQ readers know, I usually use my pictures as a guide to tell the stories. They frame the piece, so to speak, and help jog my memory of my experience – especially when I write about them 4 months later like I am now! So… this is going to be fun. Let’s get to it. 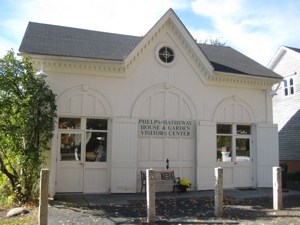 I had already had a busy day; completing the trails at the McLean Game Refuge in Granby and then checking out the Southwick Jog. I arrived and was greeted by two women who were curious as to why I was there.

“I like museums. I go to a lot of them,” I said after I paid my six bucks and began the tour. My guide pressed, “Really? Like specifically old house museums or what?” I just politely said “all museums” and left it at that… for the time being. 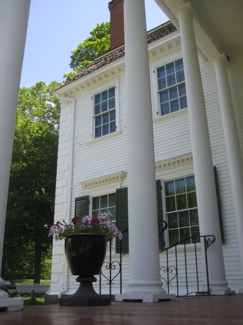 I searched far and wide for good pictures of the house’s interior – with decent success! So all the pictures here where you can actually see stuff aren’t mine. They are those of someone named “Ruthe” who posted them on something called MyZipple.com. I picked up a few others here and there as well. So thank you, faceless Netizens, for all of the following interior shots. 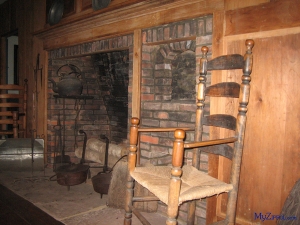 Anyhow, regarding the house (from the Connecticut Landmarks website…

The luxurious lifestyle enjoyed by two wealthy eighteenth-century Connecticut Valley families – until their fortunes collapsed – is displayed in the Phelps-Hatheway House.

Merchant Shem Burbank built the house in 1761. But as a Tory sympathizer, his business suffered during the American Revolution, the poor baby. In 1788 he sold the house to Oliver Phelps, who in 1794 flaunted the riches earned from land investments in western New York by adding a wing, an architectural masterpiece that still features original Paris-made wallpaper. Eight years later Phelps left Suffield, bankrupted by his failed land schemes. 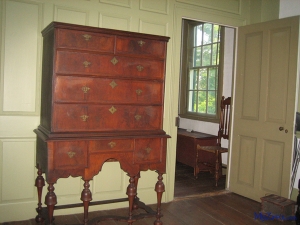 The house is furnished with outstanding eighteenth-century Connecticut furniture and landscaped with formal flower beds. The Hatheway family owned the house throughout the 1800s, accumulating an attic full of artifacts that document life during that century. 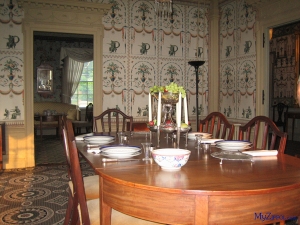 The rest of the description of this house is also from the CT Landmarks folks, but you don’t really want a fully block-quoted page.

The house is built with a center chimney structure resembling that of a neighboring house owned by Dr. Alexander King. (This house now serves as the Suffield Historical Society Museum – CTMQ visit here.) The hall parlor of Burbank’s house featured large formal rooms at the front of the house and a long narrow kitchen to the rear. Unlike earlier houses, which often had a lean-to roof, the newer gable roof allowed the second story to contain full-size chambers rather than just garret space. 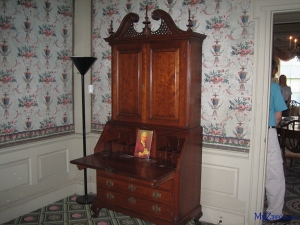 Owing to its Georgian nature, the house has lots of fine woodwork throughout. This included a typical corner cupboard which was common among the Connecticut River Valley well-to-do. After Oliver Phelps bought the place in 1788, he added more distinctive Georgian features including the gambrel roof. (The gambrel roof is an adaptation on the gable form, but provides more attic space.) 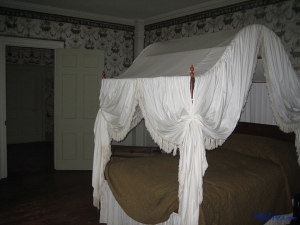 Phelps paid Eliphalet King, on of Suffield’s most active woodworkers, to add a bunch of expensive details to the house, including things called corner quoins and lintels above the windows.

Later, Phelps changed it up a bit by adding more Federal style additions like the portico with its triangular pediment supported by classical columns. Yeah, you can tell I didn’t write a lot of this stuff myself. 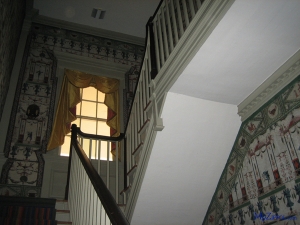 Phelps added a large wing to the house which the preservationists have kept true to the original. The dichotomy between the two sides of the house (the old and the newer) is striking. Most notably because of the super special wallpapering in the newer portion. My guide seemed especially proud of the wallpaper, as it’s apparently priceless and one-of-a-kind.

The wallpaper was probably made in the Reveillon factory in France between 1791 and 1795. One of the papers bears the mark of Jean-Baptiste Reveillon, the most important wallpaper manufacturer in France. Noted for their quality, French wallpapers were very expensive, but most fashionable. 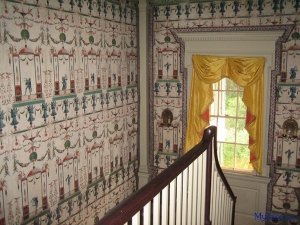 The wallpaper here is intense

And the stuff is everywhere. It’s bright, gaudy, flashy, and “big.” But CT Landmarks has a right to be proud of this stuff – the Phelps-Hatheway paper is the largest “collection” of this type of wallpaper in the world. That’s right… the WORLD. I was not only struck by the quality of the paper, but also how badly it clashed with the expensive top notch carpeting from England (here, below) – for which receipts were found in the attic of the house. 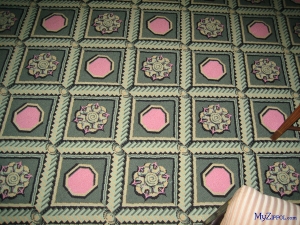 Phelps’ wealth evaporated when he oversold his land holdings in western New York. Creditors came knocking and he had to sell his house to the Hatheway family. The Hatheways lived there through the 1800’s and yes, they had a daughter named Anne and yes, I opened up Anne’s dresser in her bedroom and saw Anne Hatheway’s underwear drawer. I did not, however, find a Princess Diary. 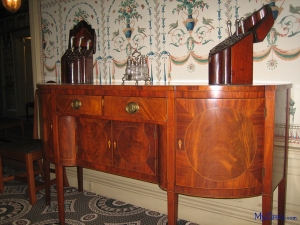 The house later fell in disrepair and was eventually sold to the state.

The gardens, which are apparently excellent, were a bit dead for the season (I’d visited just before the house closed up shop for the winter)***

***Update: For some reason I went back here on a summer’s day in 2011 and took a few pictures of the gardens. So here you are! 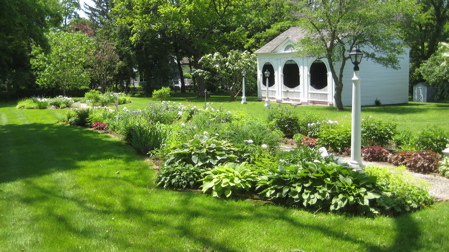 “You’re that guy! You go to museums and ‘rate’ them on your blog!” With flushed face I demurely said that indeed I was “that guy” but I don’t “rate” museums, I merely visit them and write about them. “Yeah! I just read about you somewhere!” I offered it was perhaps the recent Hartford Advocate article about me, but she wasn’t too sure. Then it hit here – she’d read about me in the NEMA Conference brochure – the one I’d be speaking at a month later where I’d meet Scott, the guy who originally told me not to take pictures at the Butler-McCook House! Life is a circle. 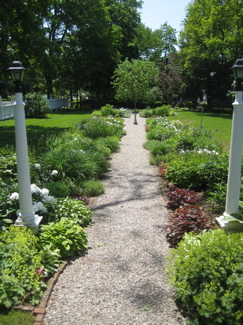 Immediately the other woman said something about being in the presence of a famous person and I was hoping she’d therefore offer up some of the cookies and stuff that a caterer was laying out for their end of the season get-together. No dice. We chatted for a while, as they sort of quizzed me on various museums around the state. I can’t lie – it was fun as heck to be recognized and commended for my hobby. It crossed my mind to ask about re-entering the house to take some real pictures, but I let it be and hit the road. 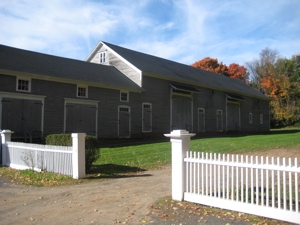