Update: This place is now known as Hungerford Nature Center.

Tax day. And what could be more taxing than corralling Damian at a museum without Hoang to lend a hand? (Eh, it’s not that hard. It was just a good turn of a phrase I couldn’t pass up.) 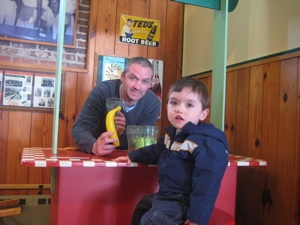 It was warm enough (finally) to enjoy the “other half” of the New Britain Youth Museum, this time out in the wilds of Berlin’s Kensington section away from the hustle and bustle of downtown New Britain. Here’s our visit to the Youth Museum’s other location. 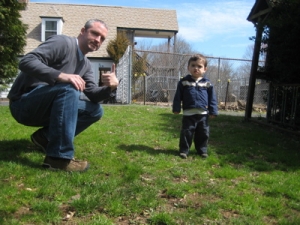 After Damian hugged some random kid in the parking lot, we entered and paid and I immediately knew that the Hungerford Park location would be a bit better for us than the downtown one. Downtown had its charms, sure, but this one had live animals… In abundance. It’s funny, their website says that the downtown location “offers school programming outreach, exhibits and special events that focus on history, art and the cultural heritage of the diverse peoples of central Connecticut.” Whereas this one “offers educational programming, exhibits and special events that relate to science, natural history, the environment and other issues confronting today’s society.” 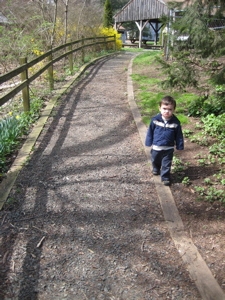 Subtle differences, but it appears to me that they delineate pretty decisively. Damian, of course, didn’t care about the “Changing Seasons, Changing Lives: A History of the Region’s People And Environment” exhibit and immediately gravitated to the outdoor area. Ah yes, Damian’s forte: Farm animals. 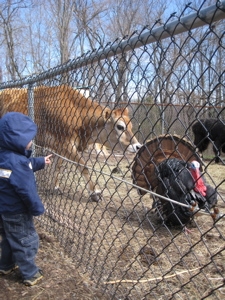 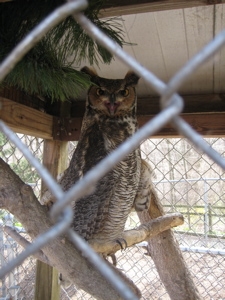 Actually, the museum has a couple cats that scamper the grounds. Damian was constantly trying to chase them down to pet them but the black one outside wanted nothing to do with him. Undaunted, we circled the outdoor exhibit space thirty times trying to corner the cat. Along the way we “met” a big fat pig, a rad great horned owl, some crazy looking ducks and a goose. To Damian’s credit, he did find the crazy looking ducks as funny looking as I did. 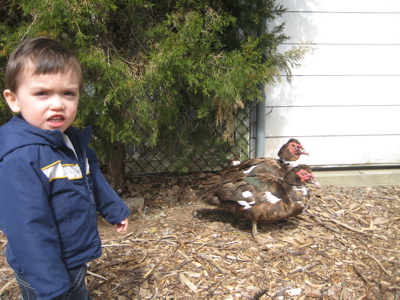 Across the yard was a fenced in area containing a veritable menagerie. A cow, a turkey, a sheep and two llamas – all getting along in perfect harmony. Y’know, this is the greatest lesson the Youth Museums can teach us. Just because we’re different from one another, our excreta is all the same when you step in it five billion times a day. Life’s lessons… Damian’s so lucky to have me as his dad. 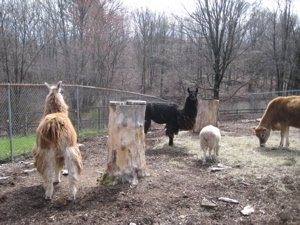 Let’s go inside already. Visitors are greeted by a giant pterodactyl soaring above with what looks like an Alaskan King salmon in his beak. A bit out of place, but no matter.

As I mentioned, the main exhibit here was (and still is, as of this writing in August 2009) “Changing Seasons, Changing Lives: A History of the Region’s People And Environment.” Most of the displays were far beyond Damian, but I thought they were very well done. And they were written and presented in a somewhat unique way: The exhibit explores how our agricultural past changed into our suburban lifestyle today. This is shown through each season and how each new year brought new challenges and discoveries into the lives of the people who worked and lived in our region. 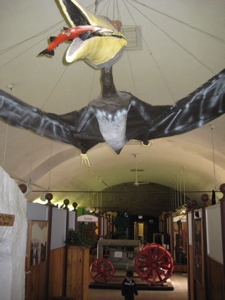 Advancements in technology and transportation caused many changes in the lifestyles and industries of this region. From dairy farming and dairy bars to unpredictable weather and the harvest season, this exhibit reveals how these changes affected the people’s lives and how they adapted to these changes throughout history. 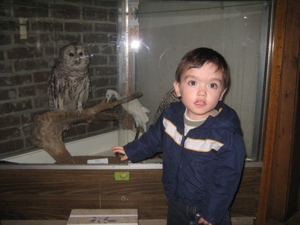 For springtime we learned about how the Colonialists planted and dealt with the adverse conditions. For winter, there was some good information about the infamous Blizzard of ’88 – that’s 1888. Known as the White Hurricane, this massive 3 day blizzard pretty much wiped out the entire east coast. Snow totals in parts of Connecticut topped 45 inches – but the worst part was the hurricane force winds and the frigid temps. 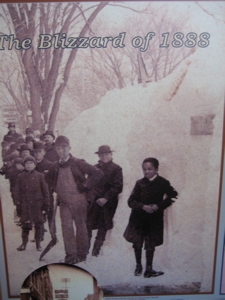 There were a bunch of displays about how people coped with New England winters back in the day. How ice became an industry around central Connecticut and… Hey Damian, did you find the cat yet? 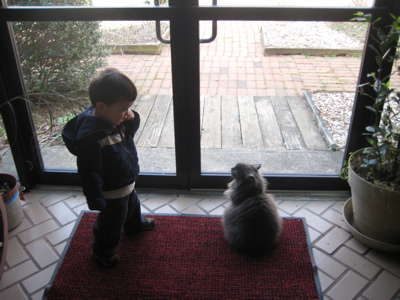 Sorry. He gets distracted. But I don’t. Onward… In the middle of the historical displays was a circa 1926 Fordson Tractor in tip-top condition. In fact, the guy who donated it used it until 1968. It looks like a giant sewing machine with giant toy wheels and, hey! Damian! You can’t follow the cat under the tractor! 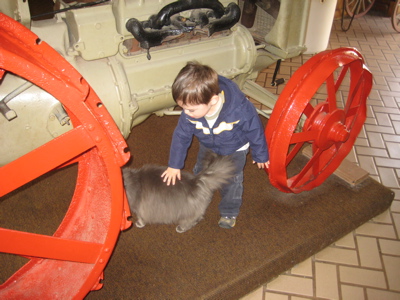 There was some good information on local dairy farms that no longer exist. (However, I am seeking out and sampling cheeses at the few existing working dairy farms left in Connecticut, here!) 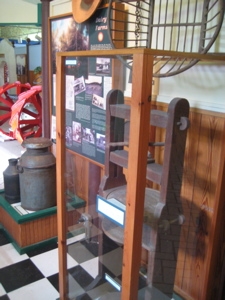 Nearby, a cheese press stands by with a sign explaining how cheese was made long ago. Rennet is added to milk in order to sour it to begin the cheese-making process. Today, rennet is made commercially but 100 years ago it was obtained from cow stomach. Which is pretty gross to me for some reason. Cow’s milk mixed with rennet from cow’s stomach equals cheese. Oh well, I still love cheese. 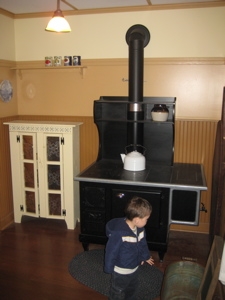 From the dairy barns grew dairy bars. These were the old timey soda shoppes that sold various frozen dairy treats. (UConn still has their operational dairy bar.) The museum even had a pretty good representation of an authentic dairy bar. 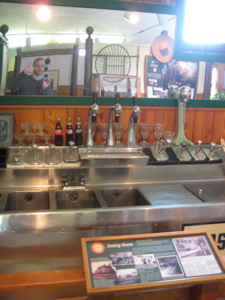 Summer was represented here through the history of the dairy and farming industries around New Britain. Autumn, for some reason, celebrated the Berlin Fair which is held each year in – of course – Berlin.

Also, there was a small exhibit on the bicycle and its role in central Connecticut society. I like bikes, so this was cool for me. 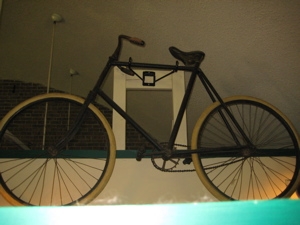 Randomly, I learned all about the painter Nelson Augustus Moore. Born right here in Berlin in 1824, he was a prominent member of the Hudson River School painters. Moore, though sharing the feeling and impetus of his contemporaries, felt no need to travel vast distances in search of evermore grandiose, spectacular vistas. He took a particular delight in the peaceful harmony of the local American countryside. Exploring the myriad seasons and moods of his native New England, he celebrated the understated, humble charm of his own back yard. A member of the Hudson River School at heart, Moore remained untouched by its more dramatic interpretations. 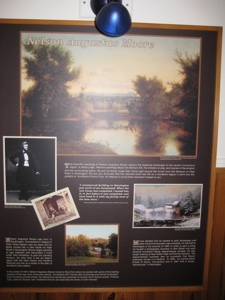 I dig this guy – he stuck around central Connecticut painting a bunch of the places I’ve gone hiking. I was admiring some of Moore’s work when I realized Damian was off again… Hmmm, where could he be? 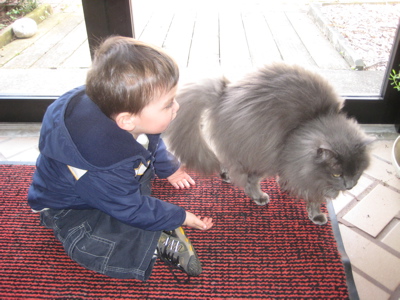 Okay buddy, enough with the cat. Let’s go see a bear. The Youth Museum here has a wild animal room in addition to all the outdoor stuff and the historical exhibits. On the way to see them, Damian bravely ventured into the bear cave! 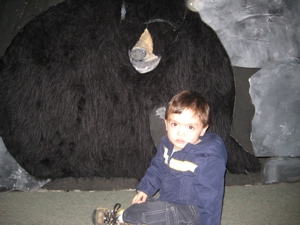 He survived the ordeal and even gave the bear a kiss, but I didn’t get a good shot of that. We moved on to the live animals and the museum has all the usual suspects: box turtles, painted turtles, corn snake, boa, various frogs, various fish – all very cool mind you. But they also had some critters called Egyptian Spiny Mice. Egyptian spiny mice get their name from their bristly-looking fur that has the appearance of spines and quills. The bristles help the mice protect themselves and their fellow spiny mice. When eaten by birds and other predators, the bristles scratch the throat of the predator. The predator remembers the unpleasant experience and avoids eating spiny mice again. 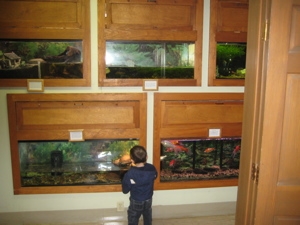 We also saw some rabbits and an iguana and all the other animals we’ve come to expect. Heck, there was even a giant buffalo head. The cutest animals, though, were the chirpy little zebra finches. Damian totally loved them as they flitted about their cage with blinding speed. Personally, I’m partial to owls (there was another one – stuffed – inside here), but what do I know? 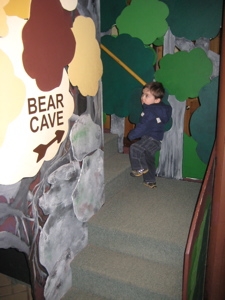 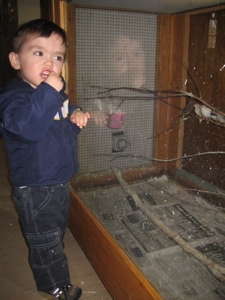 I know that the Youth Museum at Hungerford Park is pretty darn cool. It has a bit of everything – plenty of animals for the kids and plenty of history for nerdy dad. Damian kept busy with the cats and the few interactive exhibits long enough for me to read up on local history as seen through the prism of the changing seasons we hold so dearly here in New England.

Once outside, we poked around a few of the nature trails, but Damian was getting tired and we didn’t hike them all. No matter, we took in the pond and got a good flavor for the place. 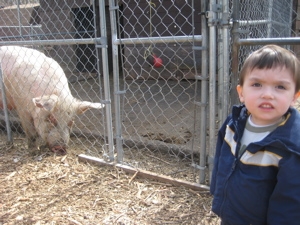