Beetle Bung Pond is an inherently funny name for a pond. Funny enough for me to make my way into the northern Middlebury woods to stand upon its murky shoreline and then to dedicate an entire CTMQ page about it. Beetle Bung Pond. 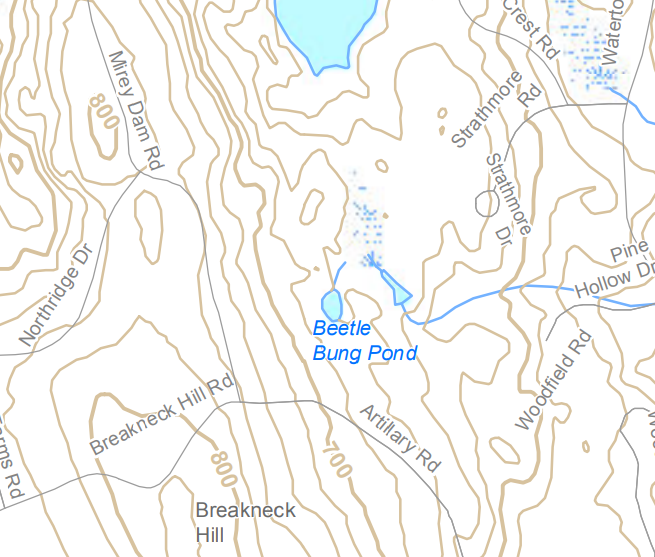 But here’s the funniest part. A Beetlebung tree is another name for the fairly common black gum tree. Also called tupelos. But it’s “Beetlebung,” not “Beetle Bung.” That’s an entirely different thing. One must assume that this little pond, which is accessible via a hike through Flanders Land Trust’s Hetzel Refuge, was named after the trees… but the etymology gets weirder. A lot weirder.

But first, beetlebungs are beautiful foliage trees, their leaves changing through a whole spectrum of fall color before dropping. The wood is hard, heavy, and not easily split, making it unsuitable building timber. However, its hardness did have some rather important uses. Like, you know how the plugs put into barrels are called bungs? (Sorry, I tend to forget you’re not all into barreling beer and whatnot. Yeah, the plugs in barrels are called bungs.)

And the mallet used to put the bung in place? That’s called a beetle. So… now I’m confused. As in, which came first? The beetlebungs or the beetles and bungs? Oh, it gets weirder. 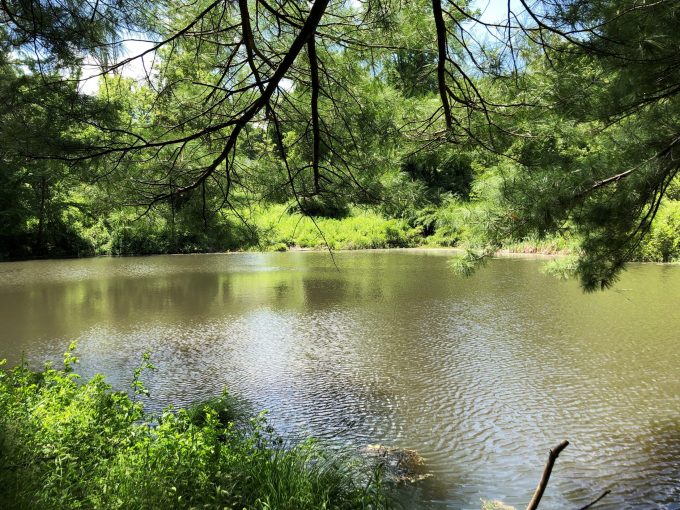 Some guy, an expert on coins out on Martha’s Vineyard, did a deep dive into the derivation of beetlebungs. I love this guy. I’m just going to copy and paste most of the article here and note that his declaration that the only place-names with the Beetlebung (or Beetle Bung) name are on the Vineyard. There’s a Beetlebung Corner and Beetlebung stores and stuff. My man should visit the woods of northern Middlebury, Connecticut.

Mr. Newman, who is 99, has researched as far back as Shakespeare and hypothesizes that beetlebung is not just a tree, but a play on words.
In a recent interview at his Aquinnah home, he spoke about his research, prefacing the conversation with a warning: “I’m going to use a lot of crude words and coarse language with you.”

His interest in the word began with his passion for numismatics, or the study of currency, particularly in the area of Colonial American coinage and bills. While researching a counterfeiting operation that went on in a small town in Massachusetts, he came across the word Bungtown to describe the town where the counterfeiting of the British half pence was taking place.

“Bungtown was used in 1787 . . . and was one of the ways of calling a town something terrible,” Mr. Newman said. “Hooverville, Dumpville, Mudville and Jerkwater were early insults to towns.”

He continued: “I then decided I would find out how the slang term Bungtown developed,” he said. “I looked at all the dictionaries and all the studies trying to find the word bung. It was used during the 19th century on occasion.”

Mr. Newman’s curiosity led him to the word originating in Shakespeare’s plays, including The Tempest and Henry V. “I ran into the Renaissance beginning of the development of these words . . . in a dictionary of 1611 that has the translation of English and French words,” he said.

From his research and thorough reading of Shakespeare, he found that bung referenced a person’s rear end. “That was used in Shakepseare’s time as part of a joke and crude language,” Mr. Newman explained. Its origin was a small money pouch that merchants wore on their belt.

“You can see how much fun I had in researching this,” he said, laughing.
Mr. Newman tried to publish his findings, but was denied publication by several journals due to his lack of PhD. Even though he was an MIT graduate and prominent St. Louis lawyer, his hobby and passion could only take him so far. His article titled Shakespeare’s Fun with a Pun on Bunghole was eventually published in 1991, much to his delight.

“Then we got mixed up on Martha’s Vineyard,” Mr. Newman said, referring to his summer home. “Here we are a mile from Beetlebung Corner, and naturally I inquire what does Beetlebung mean and I find that this is a name that is only known on this Island, nowhere else in the world.”

Mr. Newman read his Vineyard history and learned about the tree whose wood was so hard that it was used for making both beetle and bung — in other words a mallet (beetle) and plug (bung) for the barrels used to store oil on whaleships.

“Somebody in my speculation figured out that you could use these two words together and it wouldn’t sound bad . . . and therefore the joke . . . would not catch on,” Mr. Newman said. He agreed he has no evidence to back this up. “This is what Shakespeare did. He rubbed words together,” he said.

Mr. Newman will be speaking about this research and the history of slang terms in the English language at his talk on Tuesday. “I know I’m going to get a lot of flack from this talk,” he said, smiling.

Like I said, I love this guy. Our Beetle Bung Pond is small, unassuming, and… great. 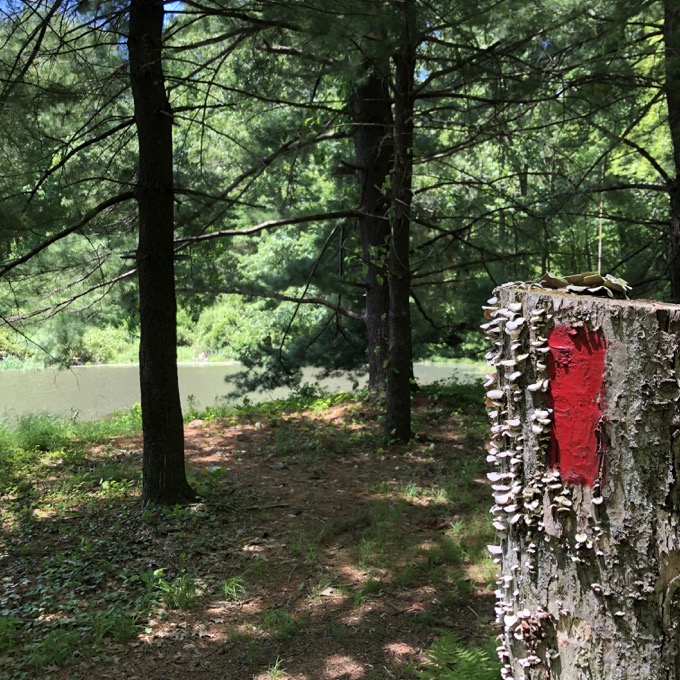