I Got the Vapors From the Vespers
Beltane Farm, Lebanon
May 16, 2010

Beltane ceased commercial cheese-making in September 2018. They still exist and offer goat care classes and other farm-related stuff, just no more cheese… which is a bummer.

I’ll do the world a favor and start off with a PSA: If you plan on visiting Beltane – and you should – approach the farm from the north. Their website tells you to drive up Roger Foote Road for a mile. Unless you have a 4WD vehicle, you’ll want to go around (adding only a couple miles, but still probably faster.) Roger Foote Road is a fairly rugged dirt road in pretty terrible shape as of May 2010. 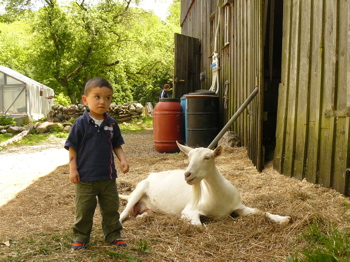 Also, now that I think of it, if you can time your visit to not concur with an article in the local newspaper, you’ll be better off. While it’s fantastic that our local farms and cheesemakers get press and therefore income, I’ve never had to wait in line to taste some cheese. Again – much deserved and awesome for Beltane… Not so good for Damian and us.

That’s the (incredibly picky and mild) bad. Now for the good: Beltane Farm is awesome. It seems that our Connecticut cheesemakers have an inherent niceness gene. From Bethlehem to Union to Colchester to Lebanon, everyone we’ve met along our “I Made it Up But it Should be Real” CT Cheese Trail have been wonderful. (Ironically, the only time we ran into a slightly gruff proprietor was a nun in Bethlehem! Where we didn’t get any cheese.) 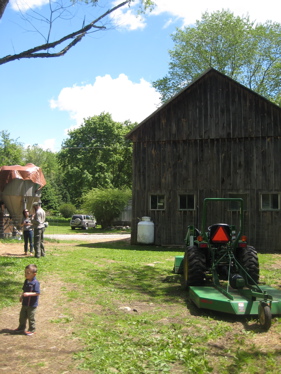 We arrived at the farm and found some very happy and lazy goats lolling about, unpenned. Such is life at Beltane. The name Beltane refers to the old May Day celebrations of Celtic Europe. In this pagan celebration, fresh cheeses and dairy products were enjoyed as an integral part of the celebrations welcoming a renewed milk supply from the successful kidding and lambing season of early spring.

I wish we had had the nun cheese at Regina Laudis Abbey in Bethlehem… The ultimate cheese showdown! Pagans vs. Nuns! 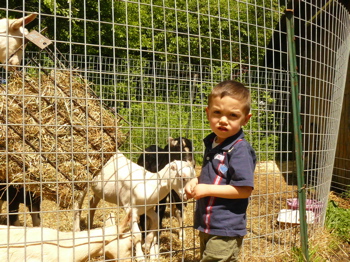 While we walk around the farm with Damian (she-goats, he-goats, horses, cows, dogs and a cat), let’s learn how Beltane came to be:

In the early 1980s, Dorothy (D.J.) Joba and Margaret Lashua began raising Oberhasli dairy goats on their farm. Oberhasli goats are a variety of Swiss origin known for their fine quality of milk and gentle disposition. The farm was called Highwater named for its location on the river valley flood plain alongside the Connecticut River in South Glastonbury, Connecticut. For the next two decades, Highwater goats competed on the national circuit and the farm name became associated with its bloodline of champion goats and fine breeding stock. 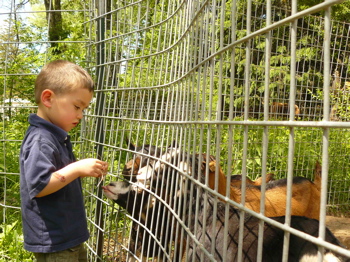 Paul Trubey crossed paths with D.J. and Margaret in 1994. Paul had a life-long interest in goats and had been planning to move from his native state of Massachusetts to northern New England with his partner Mark and hoped to buy a farm there. The fates decided otherwise and the two ended up in Connecticut where Mark accepted a job teaching Latin in the same school system as DJ.

Paul, a social worker by trade, became involved with the care of the Highwater animals spending weekends and evenings at the farm helping DJ with the care of the animals. He began making homemade cheese, reading about cheesemaking and visiting artisanal cheese makers around New England. DJ and Margaret agreed that the fine milk of these goats was making a delicious cheese and that Paul should begin the process of finding the necessary equipment to begin cheese making at the farm. 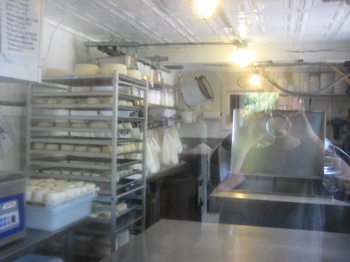 The cheese operation was licensed by the state of Connecticut and cheese production began in 1999 with the formation of Highwater Dairy LLC at Highwater farm. With the milk of the goats from the Highwater herd, Paul began producing a more consistant quality and a steady production of fresh goat milk cheese (chevre) that were rolled into french style logs; some with different herbs on the outside.

Saturday mornings would include a pre-dawn milking, in time to begin the early morning trek from Glastonbury to Kent to sell the cheese at the farmer’s market and back in time to get to afternoon market in Storrs. 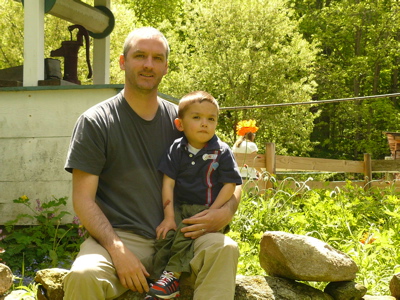 Holy cow, as one who has driven to every corner of Connecticut a million times, that’s nuts.

The cheese was well received and the network of farmer’s market expanded and grew to include several retail stores and a number of restaurants. In 2000, the cheese was awarded a blue ribbon in the national competition of the American Cheese Society.

In 2002, the dairy operation was moved to its current home in Lebanon.

In 2007, Beltane Farm and Oak Leaf Dairy of Lebanon formed a partnership to produce more milk for the growing demand and today about 115 goats are milked twice daily between the two farms during the milking season. Oak Leaf Dairy also produces a variety of quality goat milk soaps which are available at many farmers markets where Beltane Farm cheese is sold. 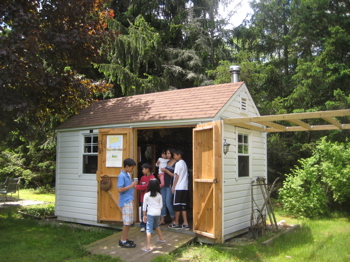 Phew. I thought this was a good lesson on how passion plus knowledge/know-how plus right-place, right-time equals success in America.

We poked our heads into the cheese-making area (walled off from the grimy public, but with a viewing window) and spoke with one of the owners/cheesemakers. He was unfailingly nice and even gave us a 5 minute spiel about the operation – in spite of the fact that there were many other visitors that day. (Though, perhaps not many were as curious as we…) 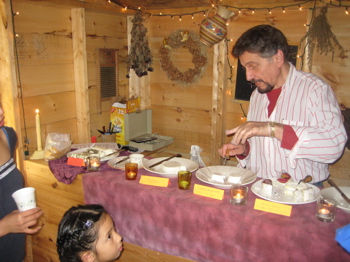 After checking out the lay of the land, it was time to try some cheese! The tasting hut is a tiny affair, set away from the main barns. This is a smart move, as no one wants to smell goat poo while discerning the finer points of one chevre vs. another.

Beltane only offers tastings on May Saturdays for four hours each day and perhaps again for a month of Saturdays in the fall. (Note, this was 2010.) Make it a point to make it there. Once we were finally up to the tasting table, I was blown away by the variety. Unfortunately, Damian couldn’t wait the 25 minutes or so and he was off with Hoang chasing cats and baby goats. Oh well. 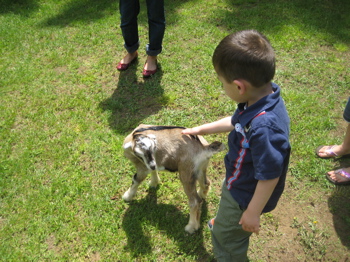 Their loss. The array and diversity of the cheeses (and goat’s milk AND goat’s milk yogurt) was dizzying. For those of you who think you hate goat cheese, go to a Beltane tasting. I happen to like goat cheeses, so you may think my review is skewed, but trust me. After the four chevres (plain, scallion, dill and black pepper) and the boursin (with garlic, chives and thyme), we moved on to some unexpected delights. 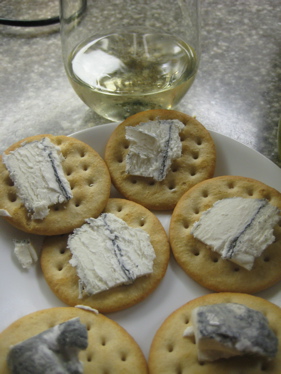 First up: Danse de la lune, so-named for its moon-like shape and dance of flavors. (Yes, that’s from their literature.) It’s a French-style cheese which is reminiscent of a Crottin, whatever that is. Aged 2-4 weeks, each hand-formed disk ripens differently and forms a complex flavor: Slightly piquant yet creamy with a hint of bleu. I loved it… And then I tried the…

Vespers. Centuries ago the French began using the ashes from their grape vine prunings on their goat cheeses. The line of ash typically divided the morning milk from the evening milk. This ripened cheese offers a creamy flavor with the character of a French ripened cheese. The ash in the middle is food-grade vegetable ash. 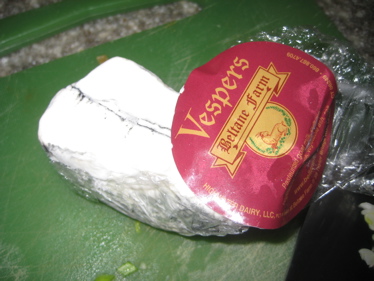 Sound strange? It’s really not – you eat the char on steak and the char on red peppers, so why not the char of grape vines? We bought some and ate it right up at home. It’s easily the best goat cheese – heck, some of the best cheese of any sort – we’ve ever had. The only weird thing? It makes a disturbing squeak when it’s cut. You’ll get over it.

Beltane also has a goat feta and a goat ricotta and a goat Pecorino. I know, I know… that’s weird I guess, but it’s really, really good. 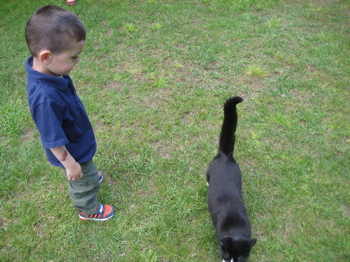 The family atmosphere, cute baby goats in the Spring (one followed me all the way to the car and Damian had a ball with the thing) and excellent cheeses make a trip to Beltane in back country Lebanon well worth the effort.

If the Trumbulls and Rochambeau can’t put Lebanon, CT on the map, Beltane Farm can. 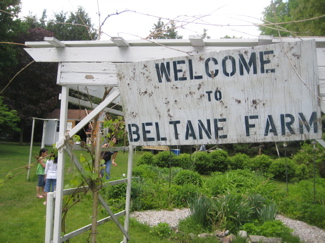