All you can eat FREE HOMEMADE ICE CREAM SUNDAES? Corny food bloggers would say, “Yes please!” CTMQ says, well, I can’t type the expletives here but there were some excited ones. Especially since Hoang was about 9 months pregnant and the call of the frozen dessert is strong. Just look at the slightly insane gaze below. Who cares that it was chilly outside. And who cares that it was nearly in Rhode Island – in fact, perhaps only a crow-flying mile away is the easternmost point of Connecticut. 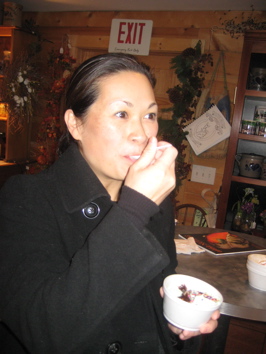 But no matter where Ekonk Hill was, we were getting all the ice cream we could eat! For free! Eastward, ho! During the long drive, we learned about where we were going via their website. Now, the Brown Cow Café is but a small part of what they do down there in Sterling, as they are more famous for the birds they raise for people to eat. Here’s some background information, pared down: 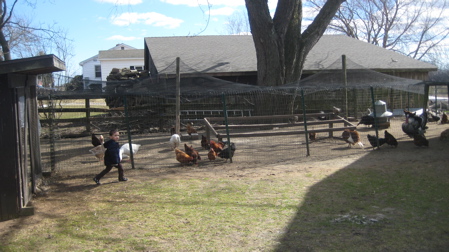 Ekonk Hill Turkey Farm is a family farm owned and operated by the Hermonot Family. Elena Hermonot (mom) runs the farm’s Milkhouse Bakery and can be found waiting on customers in the farm’s store seven days a week…

Rick Hermonot (dad) works off the farm full time as a farm consultant for Farm Credit East. Rick looks forward to weekends, evenings, holidays, and vacations when he can help out on the farm…

Christopher Hermonot (son 1) is married and lives with his wife Susan on her family’s farm in Franklin, CT. Chris raises beef and hay, some of which are sold at our store at Ekonk Hill Turkey Farm. Jonathan Hermonot (son 2) is a graduate of UConn with a degree in Ag Economics. Jon is the production manager for the turkeys…

Ashley Hermonot (daughter 1) is also a student at UConn majoring in Animal Science. Ashley works in the store, serving customers and she also helps her brother, Jonathan with the chores involved with raising the turkeys… Katherine Hermonot (daughter 2) graduated from Killingly High School where she attended the Vo-Ag program and was involved with the FFA. She now attends UConn and is majoring in Animal Science…

Rick and Elena are former dairy farmers… We’ve had a family tradition of raising everything that is served on our Thanksgiving table. Of course, that starts with the turkey. In 1998, we raised 15 turkeys for family and friends. We have grown to 2,00 pasture-raised turkeys today. We are now the largest grower of pasture raised turkeys in Connecticut! 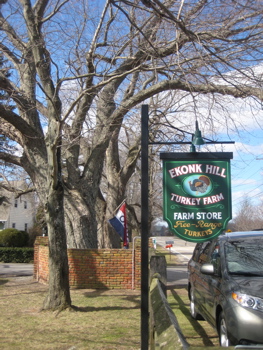 Wow, okay, that was a lot about about stuff not about ice cream. But I like that stuff; pretty impressive the family is sticking to the farm in different ways, at least in 2011. (Unless there is a son and/or daughter 3 that they just ignore because they went off to beauty school in the big city or something.)

After Damian checked out the variety of barnyard birds for a while, it was time to go inside for some ice cream. Now, I forget what the event was, exactly, but I found out about it online and it was indeed real. The café sells a bunch of stuff; most of it locally made in the various farms around eastern Connecticut. But really, with a very pregnant woman and a five-year-old, there was no messing about. Straight back to the ice cream counter. 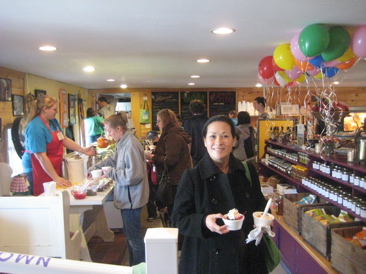 The Brown Cow Café was inspired by our Jersey cow, Blossom. We almost named it Blossom’s Café but since ice cream, not flowers, was going to be our featured product, we went with The Brown Cow Café.

The Brown Cow Café on Ekonk Hill opened in April 2006, offering premium ice cream, fresh from the farm. It was an immediate hit with customers, many claiming it to be the best ice cream they’ve ever had! Blossom enjoyed all the attention from the 16,000 visitors she had in the first year! 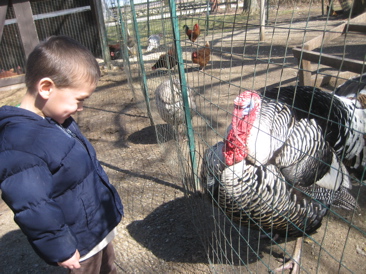 Although I still didn’t really believe it, it was true! I ordered three bowls of ice cream and they just gave them to me! (Rest assured, you can visit Ekonk Hill and pay for your ice cream on every other day they’re open – and it’ll still be worth it.)

Then we walked the five feet over to the sundae fixins area and were able to add on all the traditional toppings. It was craziness I tells ya. 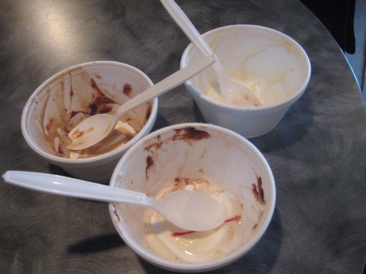 The ice cream here is excellent. The three of us ate in stunned silence while fetal Calvin kicked and punched; his way of telling his mama to get some more of that delicious, delicious ice cream into his umbilical cord.

So that’s exactly what she did… three times. Yes, that’s right… Never offer a pregnant woman unlimited free ice cream sundaes. (There was discussion of going for a fourth, but I think embarrassment won out over ice cream love.)

The café and the outdoor area out there in Sterling is charming to say the least. Little kids always enjoy funny looking ducks and turkey waddles. And heck, dorky dads like me like the things like the Charles Dow birthplace marker right up the road! 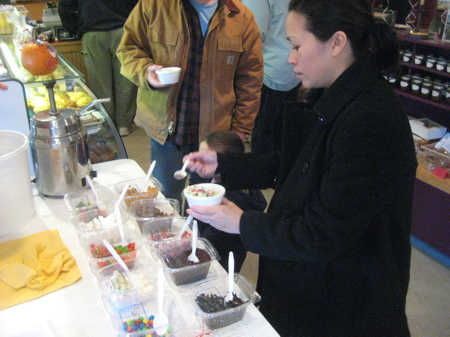 Oh – I’d be a fool not to mention this item on their menu – Hot Gobbler Sundae – No, it’s not ice cream! This delicious dish hits the spot on a chilly fall afternoon. It’s made with a mound of mashed potatoes topped with roasted turkey breast, stuffing, gravy, and topped off with a ball of cranberry sauce. A taste of Thanksgiving in a bowl!

Ekonk Hill is one of those places seemingly lost in time; a true family farm in a true family farm setting in a farming community that very few people visit accidentally. It’s as far away from Bridgeport and Greenwich Connecticuts as you can find, and it’s rather wonderful in its way. 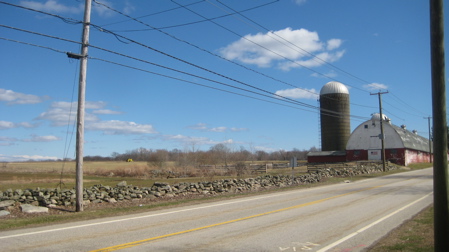