My word, where to start with Charter Oak. While they are a newer Connecticut brewery, they’ve also been around forever. Okay, 2012, but that’s nearly forever in Connecticut-breweryland. I’ve followed the company’s trajectory since then, and it has been a wild ride. 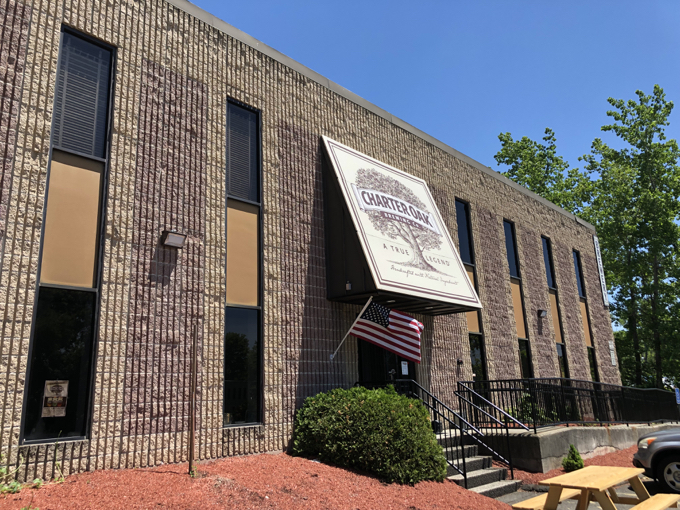 This is one of those breweries for which I have so much “stuff”, collected over the last seven years, that I don’t know what to do with it all on this page. I’ll try to recap the pre-brick and mortar days as succinctly as possible. Please bear with me.

Scott Vallely of New Canaan, was a very successful businessman. Like, very successful. An entrepreneur throughout his adult life, Vallely owned Paper.com among other more specialty paper businesses. In 2011, he decided to sell Paper.com (and the other ventures) which netted him a nice windfall. Great! and well deserved I’m sure.

At that time, he decided he’d open a brewery. I’d love to skip from 2011 to 2018, when he finally did open an actual brewery, but I just can’t. We’ve had several breweries make premature promises and false starts over the last decade, but Charter Oak is the king. 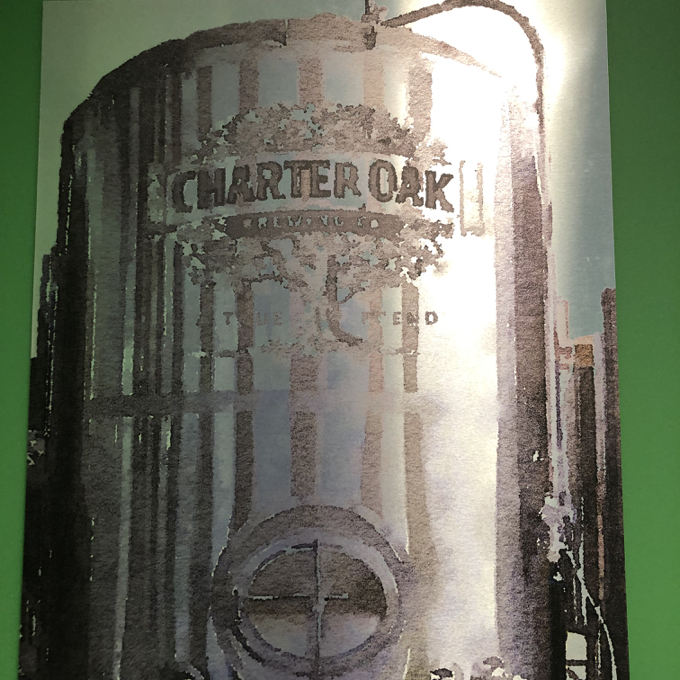 Back in the day, with far less shelf-space competition, running a contract label wasn’t too hard or dumb. And this is what Vallely did, brewing out of a couple places in Massachusetts – Paper City mostly. By 2013, he was going to open in Connecticut. I forget all of the towns we were told, but South Norwalk was his focus. He did an interview once, let’s say 2015 now, wherein he said that if he wasn’t open by the end of the year some cosmic force would rain hellfire upon him.

He didn’t open in Norwalk in 2015. Or 2016. Or again in 2017 when he super-duper promised he would. Now, I’m not making fun of him, as I’m sure as a successful businessman he wanted everything perfect to maximize his profit margins. No flying by the seat of Vallely’s pants.

During those years, the contracted beer was always perfectly average – which is pretty good for that class of beers. From Paper City to Thimble Island to Stony Creek and who knows where else. Charter Oak was quietly the ultimate Connecticut gypsy brewery. Vallely became known for his boundless energy and limitless hustle, appearing at tastings every Friday and Saturday at package stores all over the Nutmeg State. Charter Oak is a story of determination if nothing else. 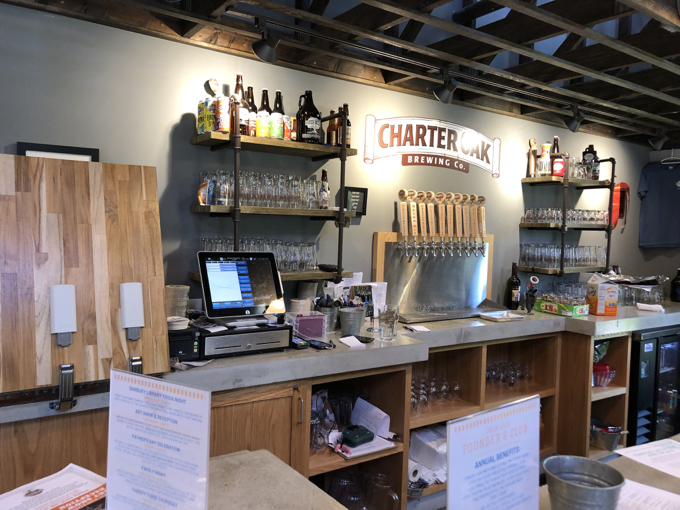 Then it happened. A “perfect” spot was found in Danbury, contracts were signed, equipment was procured, and a brewery was built. Halle-freaking-lujah. The Hat City rejoiced and I was happy for Valelly. I’d been following him through various podcasts and interviews he’d been participating in those six years. I feel like I know the man.

But we all know people like the man. Wonky and so-ingrained in the corporate world that when he speaks about anything, it sounds polished and nerdy. His interviews are awash in marketing-speak and corporate jargon. This stands out in the brewery-world to be sure. For example, here’s a little bit on the website:

Ignoring the stubbornness of sticking with what Vallely homebrewed for 40 years (brown, ESB) – because I kind of love that – note that he’s “marketing” them. Sure, he’s brewing them, but he chose to say “marketing.” I can’t for the life of me find the community forum talk he gave in which he explained why he was entering the “microbrew” market. Yes, he’s been a homebrewer for decades and yes, he’s a smart, successful guy, but that talk stuck with me for the wrong reasons.

If you want to spend an hour listening to Valelly talk about business with a horrible hum on the recording, rock on. 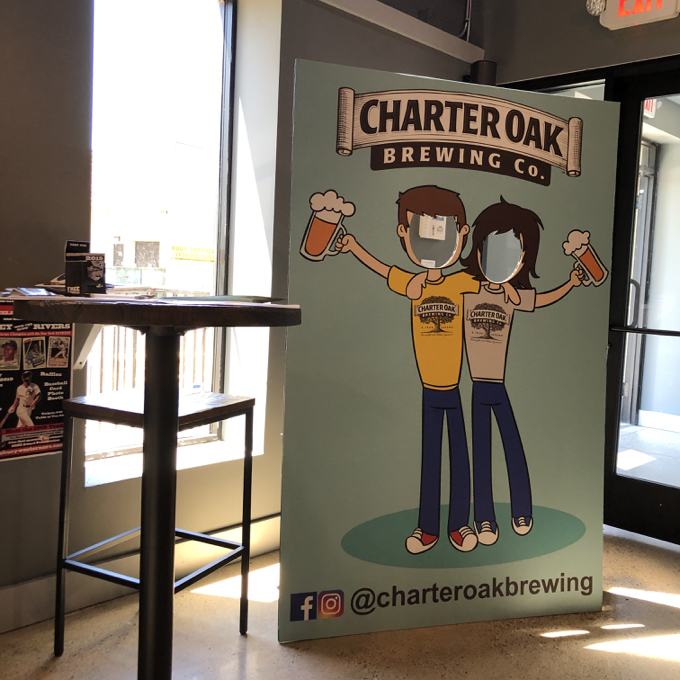 Of course, tons of start-up breweries dream of having the business acumen of Charter Oak. It’s a huge advantage these days, and I don’t mean to front on it. But to me, that’s all Charter Oak was, is and will be: an effort to carve a piece of the burgeoning marketplace to make money.

Which again, isn’t necessarily a bad thing. The whole kumbaya thing about opening craft breweries “for the love of beer and the community” is ancient history. We’ll have 100 breweries in Connecticut by 2020 and if you aren’t treating it like a real business, you’re (rightfully) screwed.

Before we get to my experience at the brewery in Danbury, let’s pause to reflect upon something else that has been going on here since 2012: The world’s greatest brewery twitter feed! Of course, any smart businessman in the twenty-teens will surely use social media to great and positive effect.

I’ve explained Vallely’s bonafides. His passion for craft beer. But I can’t explain his brewery’s tweets. They are downright insane. They’ve inspired a cultish following among some friends of mine as well as endless head scratching. Like, I literally just checked for their latest tweet just knowing it would be either funny, disturbing, or stupid. Two out of three ain’t bad:

MMmmm, “delicious foodtruck.” So go ahead and follow @CharterOakBeer to #GetOaked on the regular. 2,000 others do – and I darn well know that 1,000 of them are there for the same reason my friends are.

With that in mind, I apologize for interrupting this brewery review, but I must share with you the Top 11 @CharterOakBeer tweets of all time… because I couldn’t choose just 10. Of course, this list is subject to change daily. Such is Oak Lyfe.

11. Charter Oak loves war. There have been many dozens of tweets offering up cheers to various wars. Even the slightly obscure ones. So, cheers to the French and Indian War!

10. Charter Oak also loved to tweet @beerdudes, even though @beerdudes has 0 followers and 0 tweets. They @’d them for years… and apparently are unaware of New Belgium Brewing.

9. WTF. Seriously. Okay, sure, they were our allies 20 years later in WWII but still… WTF.

7. I’m not sure Hitler’s invasion of Poland deserves a cheers.

5. Here, we get the double whammy of Hitler AND repetition. Cheers to Hitlermobiles!

3. I prefer quality to be quite honest.

2. The best part of this one is the doubling down in the hashtags. Oh, and the fact that they later tweeted with the correct “fantasy football” but didn’t bother deleting this gem. I love this account so much.

1. My god do I love this account. #YOLO indeed.

Like I said, bonkers. They’ve been chided and called out for these (and many, many more) tweets over the years and yet, it doesn’t change. It has made me rethink everything I’ve said about Vallely’s business-sense.

Phew. Okay. Let’s move on… to the brewery! In a brown building with a brown logo! Nice, compact tasting room. (Perfect for your phantom football draft). Brightly lit. Games for kids. Welcoming. We’re off to a good start.

I was nearly attacked with kindness and glee by Michelle Vallely. She is quite bubbly. I’ve noticed this trend lately with wives and mothers behind taproom bars. It’s cute (and surely cheap) and I certainly don’t mind it. Hm, I wonder if she’s behind the crazy twitter account? But she’s a school secretary and I would think accuracy would matter to her. Can’t be her. Anyway, her smile was infectious and I ordered my flight. 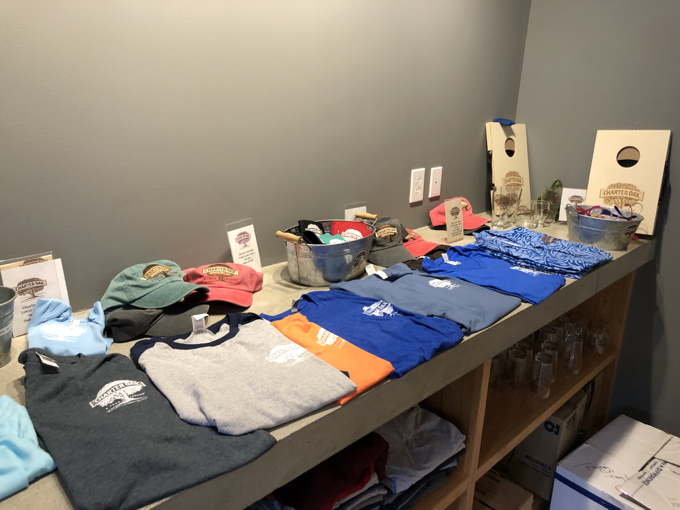 I’d had all the Charter Oak bottles over the years, but these would be different. Brewed in-house by a new brewer.

Michael Granoth joined the Charter Oak team as our brewer. Also an experienced home brewer and enjoys a tremendous passion for craft beer. Michael comes to Charter Oak after working with New England Brewing and completing his studies at the American Brewer’s Guild.

Hm. Another home-brewer (“Mad Medic Brewing,” as Granoth is an EMT as well) with no mention of what his duties were at NEBCO. Hm indeed. Whatever, anyone can brew beer, right? But can they brew a beer with “a Full month feel with plenty of flavor left on the pallet through the last drop in the pint glass?”

Let’s find out. My pallet’s month feel was parched. I ordered a $10 four-sample flight and settled into a table. Charter Oak says this is a 70-seat tasting room and a brewhouse with a 20-barrel system and a 5-barrel for pilot batches. 70 seems a bit on the high side, but who knows.

I went with the Over Yonder Lager, Hidden Constitution Honey IPA, a SMaSH Mosaic IPA, and Midnight Run Brown Ale with Citra for some dumb reason. Just as I got going, Michelle bounded over with well wishes and a free 5th sample – the brewery’s signature 1687 Brown Ale. How wonderful!

I see on the menu here they offer water, with the cheeky note, “aka Bud Lite” which should be spelled Bud Light. Har-har, way to insult potential new customers. Customers who might gravitate towards the Over Yonder Lager which is what I tried first. 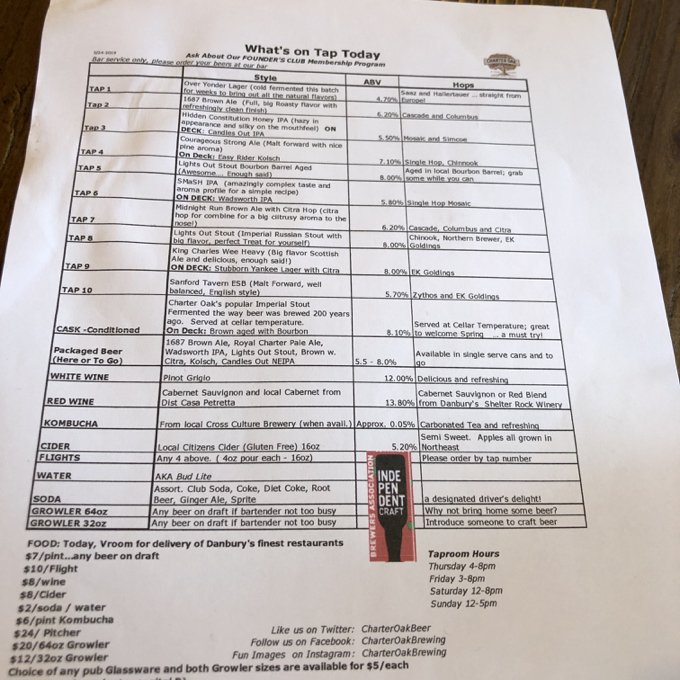 Ironically, my tasting notes are, “weak af. Water.” So maybe those Bud Light drinkers will like it? I did not like it and would posit that Bud Light is better. (Miller High Life sure as heck is.)

I found the honey IPA medicinal and cheap tasting, as though they skimped on the hops and tried to mask it with honey. I have no idea, but this too was not good. 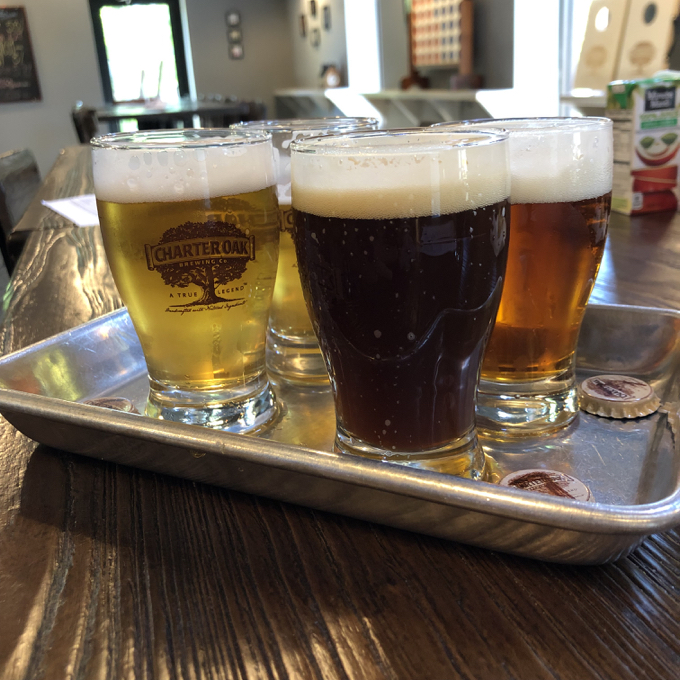 The Mosaic IPA was better, but how could it not be? This was certainly nothing like the rousing Mosaic IPA’s we can now enjoy all over the place. I’m not sure what’s going on out here in Danbury. And it’s not like a brown ale with Citra would cure my ills. Who needs citrus flavor in their brown ales? Certainly not me, although this beer was the best of the lot.

I can’t explain that either, other than to say it speaks volumes about the quality of the lager and IPAs. Oof. The flagship brown ale was also highly lacking. I’ve had it in bottles several times over the contract years and it was always good. Like every beer here, it was thin, lacking any sort of body, and very weakly flavored. 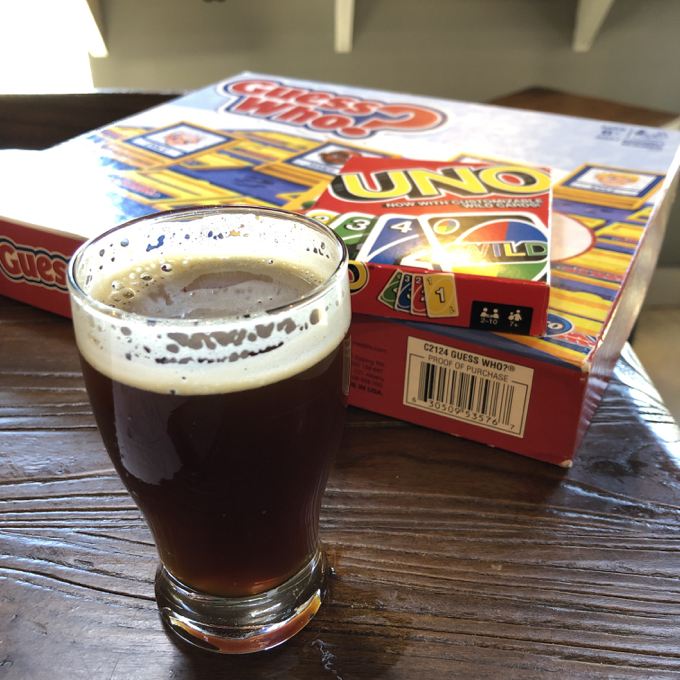 The beer here during my visit was bad. Very bad. There were five others on tap but I can’t imagine they would have changed my opinion much, if at all. Connecticut waited six years for this? As I’ve said, I enjoyed several bottles of Charter Oak beers over the years, and claimed that the Lights Out Stout was as good as any on the market at the time. And it was. Everything else in those contract bottles was good enough. 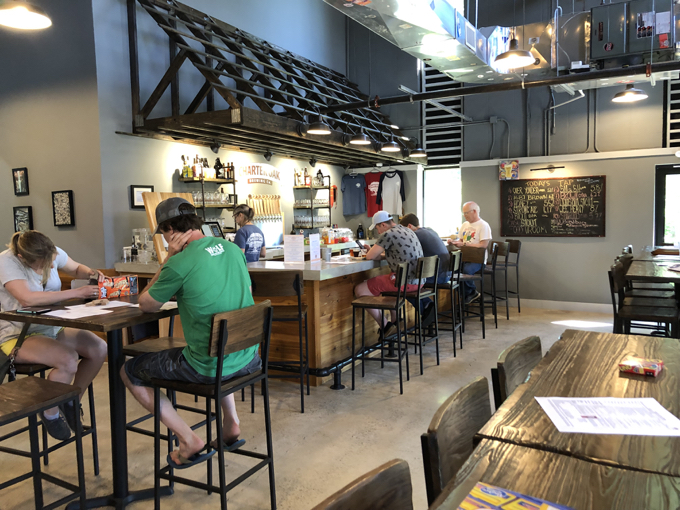 So while I poke fun at the kooky tweets and marvel at the owner’s corporate entrenchment, neither of them are really what’s important. I realize that people think it’s easy for me to sit here in my chair bashing the beer. It’s not.

I take no pleasure in doing so, and Scott Vallely seems like an earnest and good guy. I’m not looking for “cutting edge” pastry beers or triple milkshake NEIPA’s. Please god, no. Don’t move in that direction. I’m simply looking for well-made standard styles of beer. If a brewery can’t figure those out… I’m out. 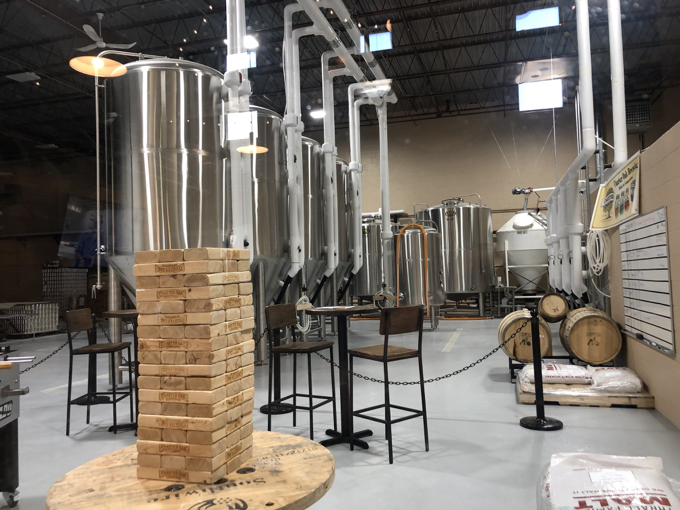 We hope you will enjoy drinking our beers as much as we enjoy brewing them!

ProTip: If you hate brewing beer this much, perhaps you should find another line of work. 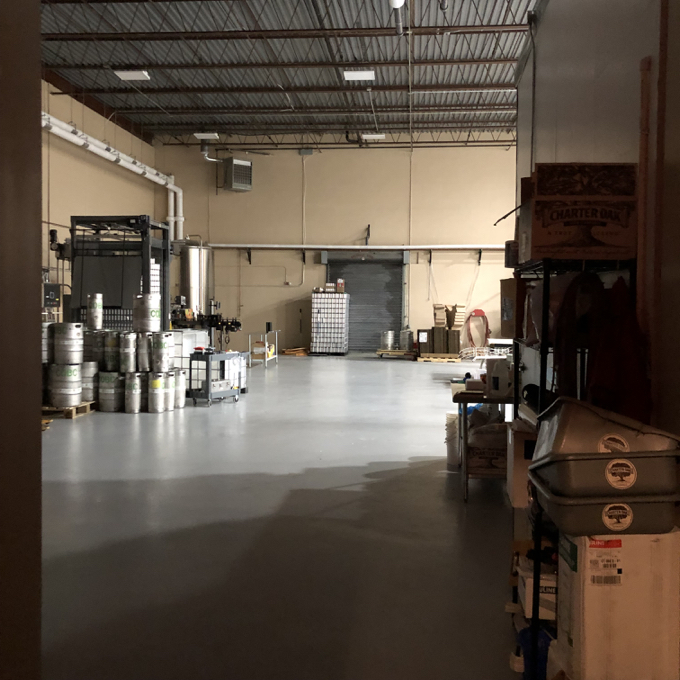 At least there’s a lot of room to grow.