CTMQ > Everything Else > Geography > Easternmost Point in Connecticut

The Beast of the East
Angle Bound q, Sterling
August 4, 2012

“Here it is! I found it!” I yelled to my road and trail weary companions. “Over here!” 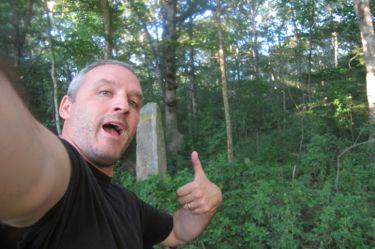 “Oh. Okay.” Their lack of excitement was warranted I guess. This was, after all, hour 14 of our fairly insane Connecticut Extreme Geo-Tour. 14 hours of 90+ degree heat and humidity. We had hiked about 7 hilly miles, rode a ferry, ran another mile across sand, and had driven over 300 miles. We lacked nutrition. And soon we’d be lacking daylight.

But we did not lack accomplishment. In fact, I’m quite confident in saying that the three of us are the only people to have ever visited the following Connecticut extremes in one day: 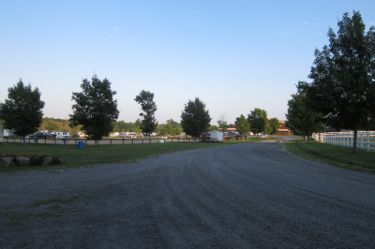 And… now the easternmost point. We made it. I’ll say this now: the day’s full itinerary included a visit up to the CT-MA-RI tri-point in Thompson, but we didn’t make it. I’d be lying if I said I didn’t feel a twinge of failure, but – and this is a big but – I had already visited that tri-point. We’d have had to hike to it in near darkness. Tom and Scott were exhausted; Tom having driven up from Virginia the day before and Scott having driven from Providence at 4 AM that morning.

Oh there’s more to this “but.” Tom had to drive home to Virginia the next day. And Scott, bless him, had to journey with us back to Avon, CT just to get in his car and drive back east out to Providence that evening. Oof. On top of that, Scott’s son had fallen and fractured his arm just as we were poking around a swamp in Sterling and was being taken to the emergency room.

So imagine you’re Scott. Looking for an old boundary marker in a swamp in Sterling and you get a call about your injured son. You’re as close to Providence as one can be while still in Connecticut, but your car is 80 miles west in Avon. So you have to drive go to Avon before you can go back to Providence. And that, in a word, sucks. 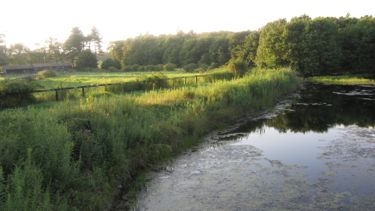 Neither Scott nor Tom was the least bit upset about missing the last piece of Connecticut awesomeness up in Thompson. And since I’d already been there, I could live with the “failure.” But let’s get back to what this page is about: Angle Bound q!

I had scouted its location a couple times in the past. While hiking out here in Sterling and Voluntown, I had driven into the Falls Creek Farm before to see the lay of the land. But since it is private property, I never really drove all the way through the farm to the “back” along the Rhode Island border.

I wrote several emails to the farm in the year preceding our epic adventure. Having never received any response, I called them a couple times before we’d be “visiting.” I left messages. No response.

And so, as we made our drive from Greenwich to Trumbull, through Glastonbury and down route 2, there was still a rather large looming question as to whether we’d find success in Sterling. After some mild trespassing 13 hours earlier in Salisbury (northernmost point) and the general madness down in Greenwich (southernmost point – which if you haven’t read that page, you really should), we sort of forgot about the potential difficulties in Sterling. 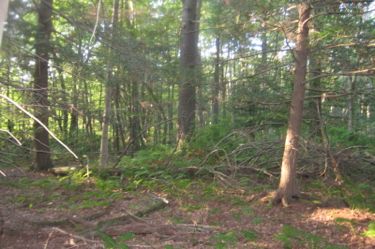 I purposely drove the boys down Hell Hollow Road in Voluntown, because whenever you have out of state visitors in your car and you’re in Voluntown, why wouldn’t you? I shouldn’t mention that poor Scott, who hadn’t yet heard the news about his son, had an extremely extreme need to, um, to make a pit stop. I figured we’d pull out on Hell Hollow where I knew there was plenty of cover, but he wasn’t going to make it. So, since we’re men, he just went at some random – oh you don’t care about this detail.

Once at the entrance to the farm, which is not really a farm in a conventional sense but rather a horse stabling and training place, I simply said “screw it” and drove right in.

Right into some sort of horse people event. We scanned the scene… was this a good thing? Or potentially worse? It was immediately agreed upon that the crowds were indeed a good thing for our purposes. So we drove on, through the complex of barns and fields and horses and their people.

Look, I had reached out to the Falls Creek Farm people several times. This adventure was, remember, all for charity. We had only the best, albeit weird, intentions. I do NOT condone entering private property without permission. I can’t imagine too many people, even avid CTMQ readers, will feel the urge to touch the easternmost point in Connecticut, so I think I’m pretty safe here. 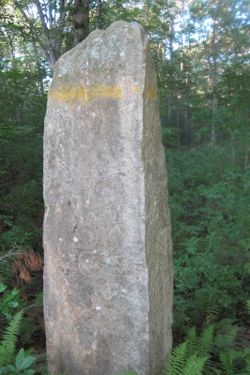 As I drove through the property to the “back,” our car did sort of stick out a bit as we were the only ones back there. But the “hike” into the woods would be short and hopefully we’d be done before anyone knew we were doing it. And besides, horse people just stare at horses all day, so I figured no one would even notice us.

We parked and entered the swampy woods. My directions were fairly clear, but unfortunately they didn’t seem to match up with reality. Or at least late summer reality. With the overgrowth and dense green of the woods, finding this border stone was not as easy as I’d hoped.

The benchmarks I was looking for (a junk yard in Rhode Island, for example) were hidden by the summer vegetation. And, of course, so was the border stone.

We spread out for a more effective search. As I ambled about, I saw my compatriots sort of standing around and talking. Was this a mutiny?! Where was the enthusiasm?! And by the way guys, you’re standing in Rhode flipping Island over there. We’re gonna find this dang thing.

Okay, I give them a pass. What did they really care? They were “close enough,” and had certainly stepped on Nutmeg land mere inches more western than the actual easternmost point. But they didn’t have a 1300 world CTMQ page to write.

But I did. So I kept at it. Multiflora Rose, swamp muck and poison ivy be darned, I kept at it. I retraced my steps (I’m purposely avoiding detailed directions here, because I want to keep this sacred place a little sacred. If you know where to look, you can find your own directions.) and struck out into the woods again.

It’s gotta be right near… “Here it is! I found it!” I yelled to my road and trail weary companions. “Over here!”

A bit more worn than most of the border stones I’ve encountered. Perhaps a tad shorter than the norhern-and westernmost stones. And the “Rhode Isl” engraving in the worn granite is downright pathetic. (I’m not sure it’ll even show up at the CTMQ resolution.) All Connecticut warrants on this thing is a barely visible “C” on its northern and western sides. 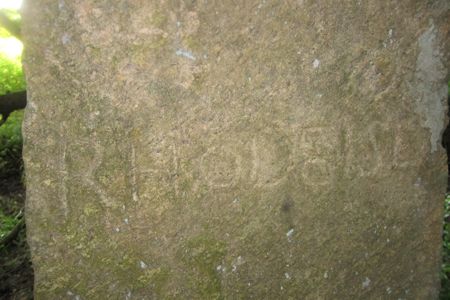 This monument was set in 1742(!) in the stone heap that was made in 1728 (!!) to mark the Warwick (RI) Corner. It was reset again in 1840 and then again in 1923 in a concrete base. In 1941, the state commissioners accepted its placement in perpetuity, marking the “principal angle in the line,” making it the easternmost point in Connecticut.

So there you have it: Even disregarding everything else, the three of us were the northern-, western-, southern-, AND easternmost people in the state of Connecticut all within a single day. (We were also at the highest elevation and northwesternmost, in case you forgot somehow.) And that’s pretty darn cool. I’m sure you could do this in Rhode Island and Delaware, but I’m not sure you could pull it off in other states.

But by all means, go for it.