Come for the Lobster, Stay for the Chowder
Clam Chowder at Abbott’s Lobster in the Rough
117 Pearl Street, Noank

Note: most of this intro stuff is repeated over on my page about their shore dinner, which makes the same list separately. Just skip ahead if you’ve already read that page… Though I hope you figured that out on your own. 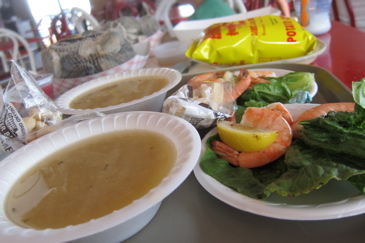 I suppose “in the rough” means that the dining room here is a lawn out by the harbor. There are indoor tables and another large grouping of them under a tent but really, who wants to chow down on a seafood feast in such a staid setting?

I’d been warned about seagull dive bombers, but we were undeterred. In fact, I don’t think we saw a single gull during the hour we were there. Abbott’s must have invented some sort of force field. There are tables out on a deck over the water as well, which would be great – but not so much for us with a rather adventurous and curious 15 month old in tow. (Note: The majority of people here had little kids.)

We also arrived around 4:45 PM – before the summer Saturday dinner rush. Heck, we even found parking right near the queue, which I hear is impossibly rare. We were through the line quickly and my order was not messed up at all (another warning) – so I can review the food.

There are two items on the Roadfood “Eat Before You Die” list here – the clam chowder and the whole “shore dinner” feast. Hoang and I each ordered a feast which happens to come with the chowder. 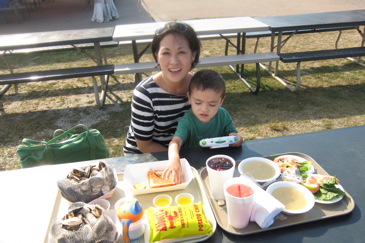 Abbott’s has a good thing going here. They have several “things” that add to their cache. They are only open in the summer. They are situated at the southern end of Noank (pronounced “No-wank” and it’s part of Groton, right next to the Mystic part of Groton, pronounced “Gra-tin.”) and require a few twists and turns on exceedingly narrow streets to reach. They are a noted rip-off, but no one seems to care. They are staffed by a billion teenagers. The seagulls I mentioned. They have their own branded potato chips. Their bathrooms are no better than public beach bathrooms. They have a thing where people now camp out to be the first customer when they open each year.

Some of this stuff is stupid and Abbott’s clearly plays up the kitsch. But whatever, they are an institution, like it or not. And we happen to like it.

The best clear chowder we know is served at Abbott’s, a breezy picnic of a restaurant at the Noank harbor, where the broth that is the chowder’s soul radiates bracing saltwater flavor underpinned by the richness of pork. It would be delicious if it were only broth; the tender nuggets of potato and sweet bits of clam are a bonus. 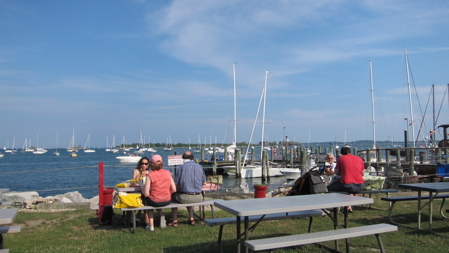 I’m no chef so I don’t know the definition of chowder. [Now reading up on it.] Okay, I still don’t. It seems there is some confusion over its origin and the word’s etymology. I grew up always thinking chowder 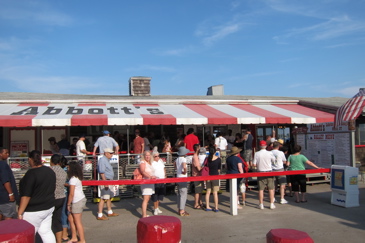 was creamy and that “Manhattan clam chowder” was just a ridiculous misnomer. I can say now that I’m wrong, as Abbott’s serves a Rhode Island style clam chowder and I loved it.

The broth is clear – no cream and no thickeners. Just salty/sweet broth filled with clams and potatoes – and it is delicious. (Interesting reading about other clam chowder variants.)

In fact, this soup is so good that it didn’t matter that we slurped it down outside, in the 85 degree sun. I didn’t even think about that until right now as I write this. I am now a huge fan of Rhody style clam chowda and plan to seek it out in the future. I love a good creamy broth, but in my older age now I’m tending to lean more towards the thinner broths.

And yes, that even includes that Manhattan bastardization.

Abbott’s Lobster in the Rough