6. Amelanchier arborea, Downy Serviceberry
Private Property, Glastonbury
Location: In a nice big yard on a corner lot out near the road, so it’s not too creepy to check out
Height: 34 Feet
Circumference: 134 inches 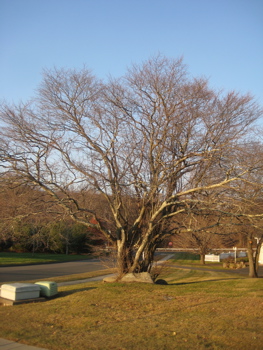 On a chilly mid-November Friday evening after a long week of work; Damian tucked in to bed, Hoang watching HGTV in the bedroom drifting in and out of consciousness and I, languidly lounging on the couch settling in for some (much better) TV watching of my own and… The phone rings. The phone never rings. Our voicemail thing helpfully tells us who’s calling so I know not to interrupt my laziness for 99% of those who call us.

I leapt to my feet in excitement! A phone call on the landline for me?! This seasonal event is so rare in our house that I barely remembered how to answer the phone. “Hey, are you around tomorrow for some CTMQ’ing?” asked EdHill.

Am I around for some CTMQ’ing, he asks. Duh. For those of you who don’t know, which I would guess is probably pretty much anyone reading this, EdHill was by my side way back in the very beginning of this blog. He thought my idea to hit all of Connecticut’s museums and blog about them was a good one, and was gung-ho to join me back then. A month later, he got a new job and moved to Washington DC and I’ve been solo ever since.

I mention this because the very first page I ever wrote specifically for CTMQ was this one, about our visit to the Pinchot Sycamore – Connecticut’s largest tree. And so when Ed called me to propose a date the following afternoon with a very short window of time during the museum off-season preceding a holiday week, I realized I had my work cut out for me. Throw in the fact that I’d have Damian with me and, well, this is why I’m Mr. Connecticut and you’re not. Ahem.

I quickly realized that I could finally check out the largest downy serviceberry tree in the country with Ed and Damian. I say “finally” because this national champion tree had been on my radar all summer long… On the many trips down Route 2 with my family to the beaches (or wherever), I always had a stop off in Glastonbury on the return home as a possibility. I want to say I had it on my “possible to-do” list at least 6 or 7 times this year, but tiredness, hunger, crankiness, etc always seemed to trump a stop at the largest downy serviceberry in the country. 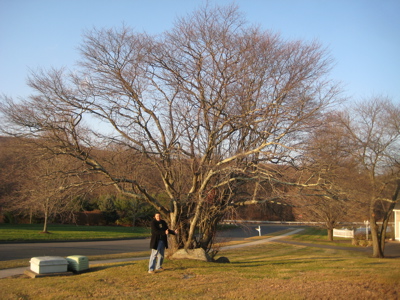 Yeah, I don’t get it either, but Hoang and Damian sort of make the rules about these things.

And so, with only maybe 90 minutes of time to do stuff for this blog on that November afternoon, our first stop was – yes – the national champion downy serviceberry tree. Awesome.

Ed was staying at his childhood home in Wethersfield, so we took the back roads up into the deep belly of Glastonbury. The deep, deep (rich) belly. We found the tree easily enough but I should note that it is in the yard of a nice (huge) private house. For that reason, I’m not printing the address. To set the scene, Ed noted, “This is Glastonbury Glastonbury. Pure Glastonbury.”

Indeed. It was a new neighborhood with new construction and, oddly, very few trees. Not just few big trees, but few trees, period. I simply cannot imagine that the bulldozer and backhoe crews that leveled the forest here for these homes had any clue that they were in the presence of a national champion. So how did it survive? I have no idea, but I’m interested to know. It’s not like it’s a giant or all that impressive looking tree. It is on the corner of lot and maybe its existence is owed solely to fortuitous circumstances.

I pondered that as Ed leapt from the car and stood by the tree to pose for my pictures. I always feel like sort of a doofus when taking pictures of things that normal people don’t take pictures of. I feel better about such things when I have someone with me to sort of defray the doofiness.

In this case, a pre-teen boy from across the street took an interest in our activity and sauntered over to, perhaps, see what the heck we were doing. 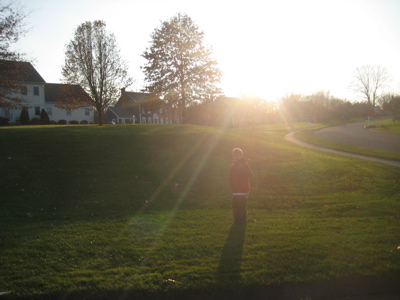 So I took his picture.

How did the Serviceberry get its name?
Downy Serviceberry information
Back to Connecticut’s National Champion Trees