CTMQ appearances by EdHill are a special treat; hitting 3 musuems in his old hometown (he now calls Washington DC home) is an event. And I’m sure glad he was along for the ride this day, because no one person can hope to have absorbed all the information we took in to make a thorough report. Before I get going I’ll warn you: The Wethersfield History Museum is quite large, chock-full of trivia and historical information, and very interesting to boot. I barely know where to begin.

But I will interject here to say that Ed passed away in May 2016 which makes reading that previous paragraph quite sad for me. 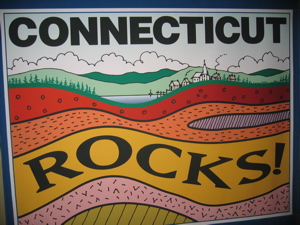 The museum is divided into four distinct parts: The Giftshop, the Changing Exibits room, the Geology room, and the static History of Wethersfield room. Each one larger than the last. We entered and met a nice lady demanding money. I never quite figured out how the pricing tiers worked, but we ended up forking over 8 bucks, which got us into two other town museums as well. I think we saved two dollars. 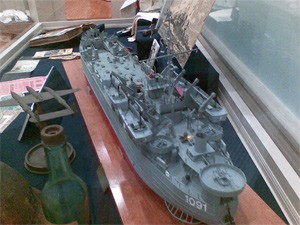 EdHill, you can sink my battleship anytime…

We were alone, as usual, but the docent made a big to-do about us and turned on some 1940’s wartime music for us on a boombox as we entered the World War II exhibit hall. The town went to its local veterans and their widows to collect all sorts of items from the era – and the veterans really came through. There is a lot of stuff – stuff I found interesting. Take for instance, some helmets from the specialized Army Grammar Unit: 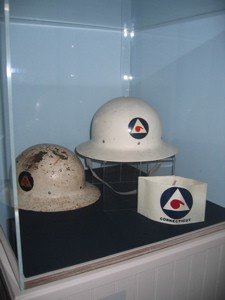 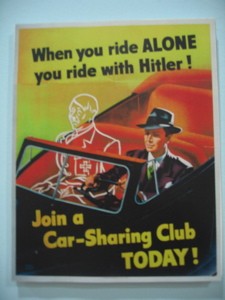 The sign was all about gas rationing, of course… a lesson that didn’t quite leave a lasting impression on Americans. They should trot these signs out again to see how they go over now.

Ed and I, ahem, soldiered onward to the other displays. There were all sorts of items from the period – war bonds, real POW shirts, victory garden layouts, model ships made only with real bullets and shells… and check this out – Do you know what this is? 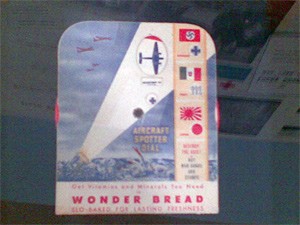 Wonder Bread included them in British bread packs and they are little plane spotter viewfinders. That is, there’s a wheel with little silhouette pictures of warplanes and they basically told whether you should run down to your basement or continue on your way to have a spot of tea. Pretty nifty, huh? 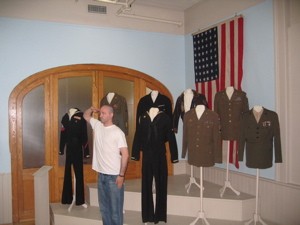 Righto, then, what else did they have? For one, an explanation of why the building was called the Keeney building; Lieutenant Robert Allan Keeney, a Wethersfield native, was on the USS Indianapolis, which as all astute CTMQ readers know, carried the top secret Little Boy bomb over to the Pacific theater. Ok, but why him? Google, help me out:

Erected in 1893, this stately brick and sandstone building originally served as a Wethersfield public school. With additions and renovations, the building continued its community service through the years as school, town court, and public library. In 1985, a major renovation began through the generosity of a longtime Wethersfield resident, Mrs. William Keeney. In appreciation, the Wethersfield Historical Society named the Center in memory of Mr. and Mrs. Keeney’s only child, Robert Allan Keeney. At the age of 21, Navy Lieutenant Keeney perished with hundreds of servicemen when the U.S.S. Indianapolis was sunk in the last days of World War II. Proudly bearing the name of a Wethersfield son, the Robert Allan Keeney Memorial Cultural Center continues to serve the community as a meeting place for organizations and celebrations, as a showplace for artisans past and present and as home to the Wethersfield Historical Society.

Of 1127 town residents who fought in WWII, only 27 died. The last part of the room allowed Ed and I to get a sense for what it was like to battle those Nazi Krauts: 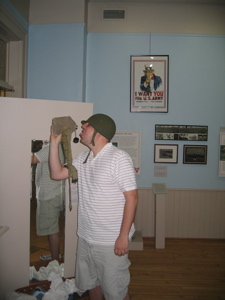 And also, for some strange reason, I also got to pretend I was a lonely new mother while my beloved was off at war: 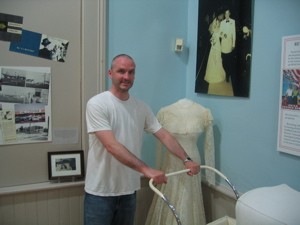 And finally, for an even stranger reason, I was also able to pretend I was a mother pining for my son who was off at war while also pretending I was battling those Nazi Krauts: 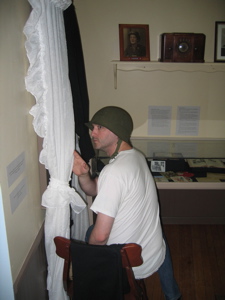 On to the next room – The Geology Room! Totally rockin’! Admittedly, I didn’t really read all the displays here because I figured that I’d be in some more informative and specialized geology rooms in other science museums. But truthfully, this room was really interesting, fun, and informative. The only notes I took are, “67K thick ice sheet over CT,” and “Brownstone-Portland quarry.” Those are both fascinating, but we’ll just go with the pictures. For some reason, they felt the need to have a bunch of unfunny jokes: 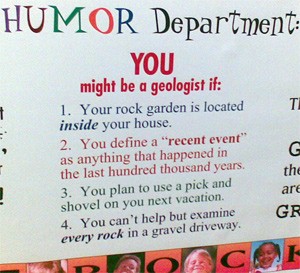 When in fact, the joke opportunity here was far greater: 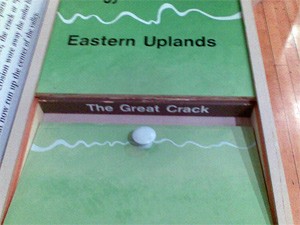 There were displays about the basalt traprock ridge that make up the backbone of the state. This also happens to be the range that the Metacomet Trail traverses. The very trail which Hoang and I are completing all the way end to end: 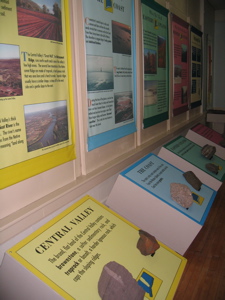 There was a cool display about the endless stone walls found all over Connecticut. 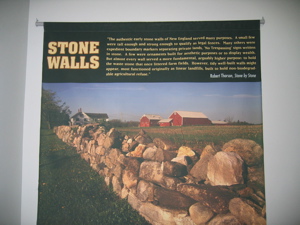 I even got to try my hand at building a stone wall. It only took me 42 minutes to do so. 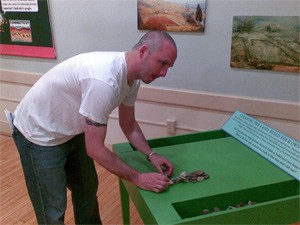 Ed loves playing those Sims games on his PC. So he really got a kick out of building a little town in a geologically cognizant way. Too bad a flood took out his red house down there on the flood plain. 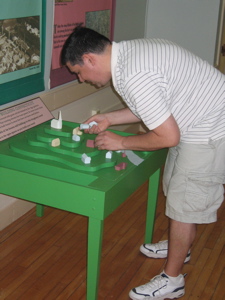 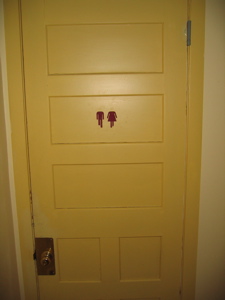 So WWII and Geology… what about Wethersfield?! That’s really why we’re here, right? Before I get to the town history part, let me tell y’all how cool it was to be with Ed for this. He is a proud Wethersfieldian, and knows his stuff. I got the full story from him in lieu of reading all the boring words! 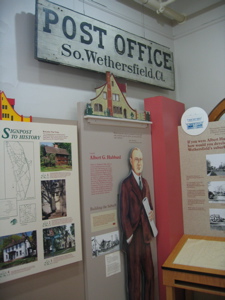 Just kidding… Sort of. But now I know… Star Trek, Star Wars, Wethersfield history; EdHill’s your man. The town history wing of the building is very, very nice. Well kept, well organized, and very well displayed. The museum immediately addressed the biggest issue facing Wethersfield, now and forever: Is Wethersfield or is Windsor the oldest town in the state? For a non-native Connecticutian and non-resident of either town, it’s all sort of lamentable. But for some reason, this debate has raged for years. Over three-hundred of them, actually.

Windsor stakes the claim in 1633 but in 1634 a James Standish of Wethersfield argued they were first. The ledger here at left is pretty funny – it says, “Greetings to Old Wethersfield from Older Windsor.” I don’t know which is oldest, but judging from the cheeky display here, I’m thinking Windsor. 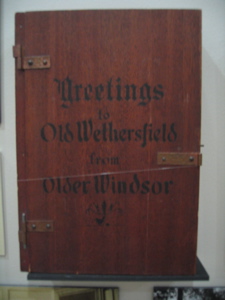 The room had many displays of prominent townsfolk from the years. With the largest historic district in the state (1100 structures), there’s lots to cover. Things like how the First Church of Christ in town is the only brick colonial meeting house left in Connecticut. About how Albert Hubbard built 240 houses that were prototype suburbs back in the day. There was a pretty interesting display of the old Connecticut State Prison, which was in town and has many stories about it. You can read more about them here, since the structure no longer exists. 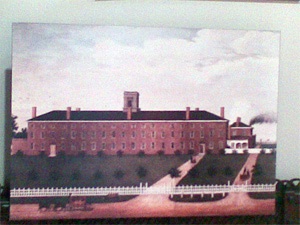 Wethersfield has a rich farming tradition that lasts until today. The world famous Comstock Seed Company began here – and continues to this day since 1838 as Comstock, Ferre & Co. It opened for business in 1820, and is said to be the oldest continuously-operating plant and garden company in the country. What a storied tradition this company has and what a homey New Englandy barn they still maintain: 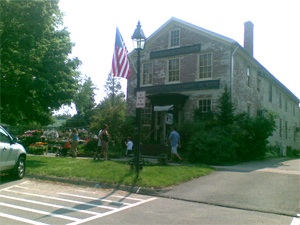 That picture was taken right down Main Street and it’s nice to see Wethersfield keeping tradition alive. Well… Until this month (July 2007), that is. Sigh. (The town has agreed to sell off some adjoining buildings for development.)

One particular farming topic in town that everyone there knows about is that of the red onions. I never noticed, there are red onions everywhere you look in town. It’s on the welcome signs, it’s part of the Historical Society logo… elementary kids have to eat them plain and whole as part of gym class… But why?

Three-hundred to 200 years ago, the red onion was one of Wethersfield’s top cash crops. They became famous for this because 1/3 of the onion farmers in town were women; at a time when women didn’t exactly farm. The details are a little murky as to why this was, but some say the men were working the further-away fields more exposed to Native Americans. It’s all quite quaint and the town loves it’s onion maidens. And now I do to: 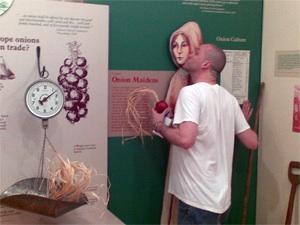 She made me cry

Moving on, there was an interesting display on Silas Deane. As thorough CTMQ readers recall, we learned back at the Connecticut River Museum that Silas Deane was a traitorous scalawag. At the time I asked Hoang, “Why is there so much named after Deane, especially in Wethersfield, if he was such a punk?

Well, the display here wasn’t exactly flattering – but it wasn’t totally crushing either. They admit he was a privateer and perhaps had some shady dealings… but wouldn’t go so far as to say he was a traitor. Down with Deane! Down with Deane! 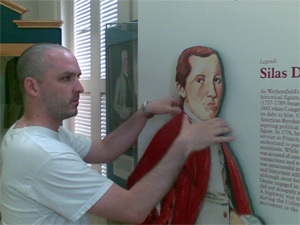 There were other displays, bringing the town history all the way up to the 1970’s. I’d be remiss if I didn’t mention that EdHill was in the town’s Fife and Drum Corps as a young lad and while this isn’t him… I choose to pretend it is: 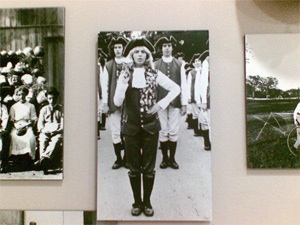 After the museum portion, we checked out the gift shop and I bought some onion seeds – red onion seeds and took an artistic picture of them on my deck. I’m writing this almost 2 months later and don’t have even a seedling to take a picture of, so that’s all we need to say about my onion sowing skills. 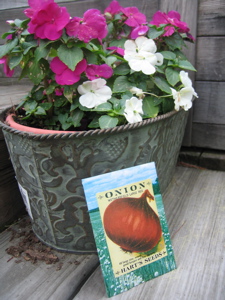 Ed stole a tee shirt and got locked in jail: 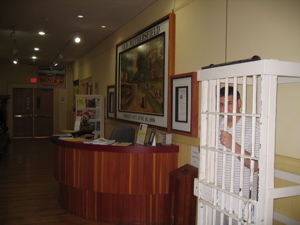 I kid… but he actually did buy a tee-shirt which was almost funnier. My man likes his souvenirs, no arguing that. I can see him down at his fancy-dan lobbyist shindigs in DC wearing his Wethersfield Historical Society tee-shirt and pulling it off – just don’t forget to mention CTMQ! It’s totally cool! Almost as cool as your town, Ed. 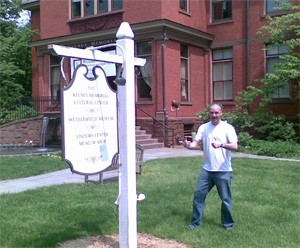