CTMQ > Everything Else > Religious > Grace Farms

This is the first post I’m writing in 2016. Perhaps it will grant me the grace and peace I need to continue forward in a kind and forgiving manner.

But most likely not. 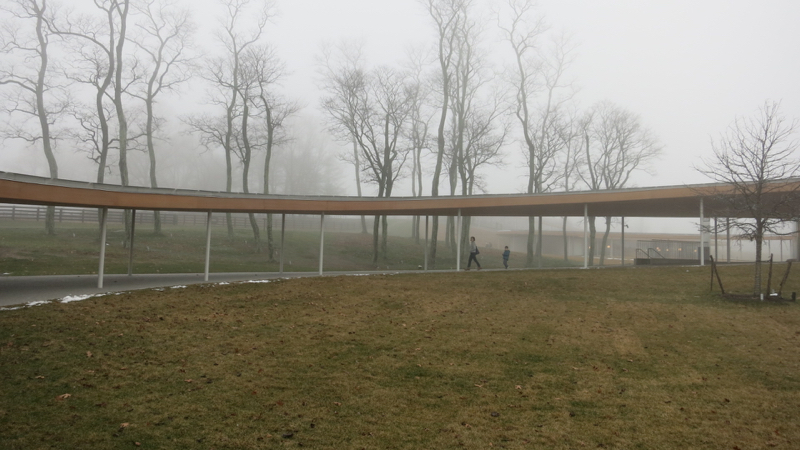 (I am posting larger pictures than ever before on CTMQ. Enjoy!)

I pulled off the Merritt after our family’s annual Christmas trip to my parent’s house in Delaware and headed north through New Canaan to check out this new, um, I didn’t even really know what it was. Just a place? An art colony? A nature sanctuary? A church?

I only knew that it would be beautiful and would have some food to keep my children happy.

I was correct on both counts.

Grace Farms is on the New York border in New Canaan and… is still confusing to me. I asked Hoang where she would slot this in on my website, as we agreed that it’s not a museum. But it’s so impressive and beautiful and welcoming, that I didn’t want to bury it in some dusty category no one visits. 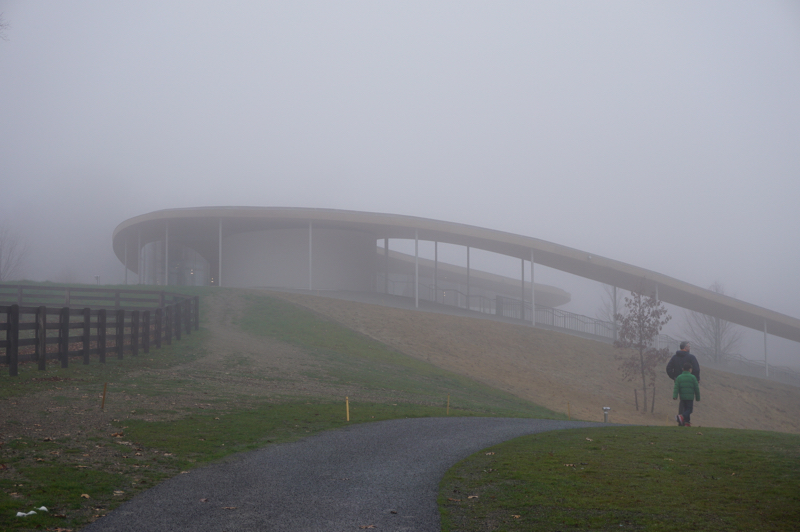 But here we are, in the Religious section of Curiosities. Because in the end, that’s what Grace Farms is.

Grace Farms is a welcoming new place, where a building designed by SANAA is seamlessly integrated into 80 acres of open space for people to experience nature, encounter the arts, pursue justice, foster community, and explore faith.

A diverse natural habitat in the northeast corner of New Canaan, Connecticut, this former horse farm is home to numerous varieties of flora and fauna. Approximately 77 of the 80 acres will be retained in perpetuity as open meadows, woods, wetlands, and ponds. 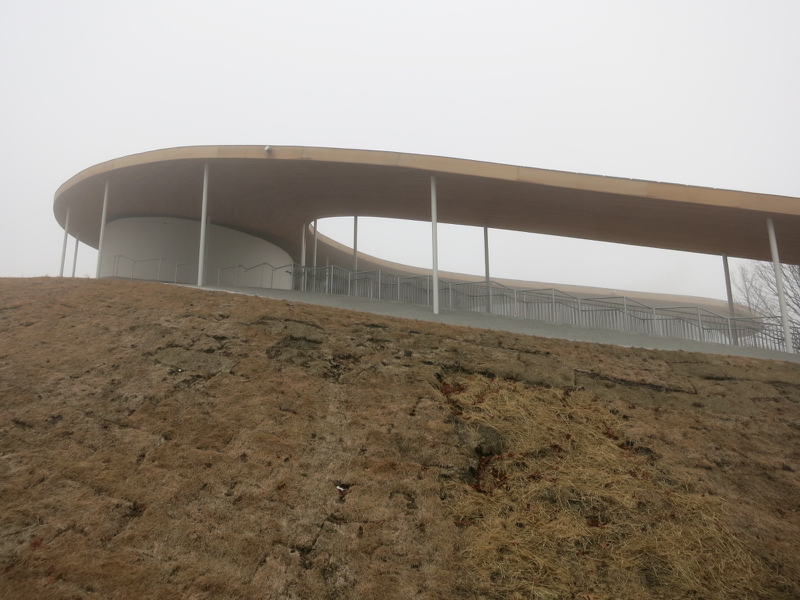 Grace Farms is free and everyone we met associated with the place was kind and welcoming. We were given a map and pretty much told, “Just go walk around and your boys can shoot some hoops in the gym.”

Ok. I didn’t know about a gym.

The highlight here, and the reason we were there of course, is the River Building. In fact, this is the reason 99% of people will come here from around the world. 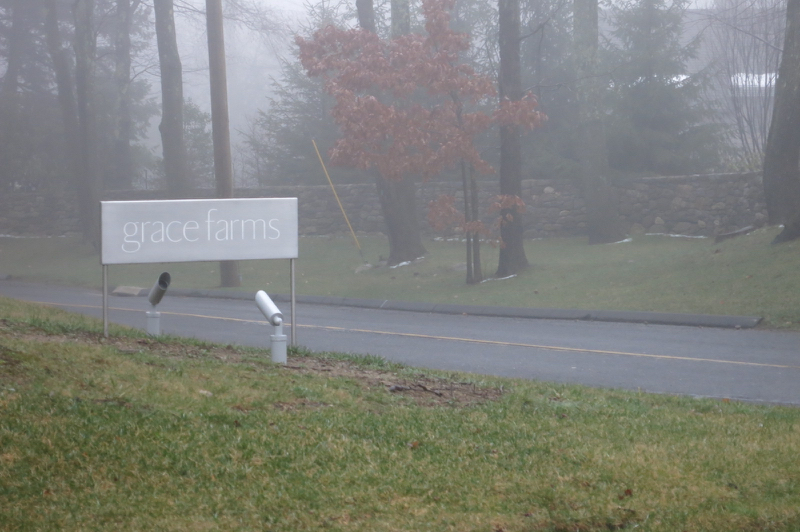 Yes, I said “around the world.” Grace Farms has been featured in pretty much every single architectural publication in its few short months of existence. Here’s a blurb from Architectural Digest that takes care of the holes in my description:

Part cultural center, part spiritual retreat, the recently unveiled Grace Farms complex in New Canaan, Connecticut, is, at its core, a tribute to the landscape. There’s the property itself: 80 acres of former farmland that is now a nature preserve. Then there’s the sinuous main building, designed by the Pritzker Prize–winning firm SANAA to nestle lyrically into the site. Dubbed the River, the 83,000-square-foot facility comprises a series of single-story pavilions connected by covered walkways. It houses, among other spaces, a gymnasium, a library, and an amphitheater for both nondenominational worship services and secular events. Glass walls blur the boundary between the interiors and the grounds, which SANAA transformed in collaboration with the design studio OLIN. Seen from the air, the aluminum-roofed marvel shimmers spellbindingly, like a brook frozen in winter.

Go look at their picture from the air. 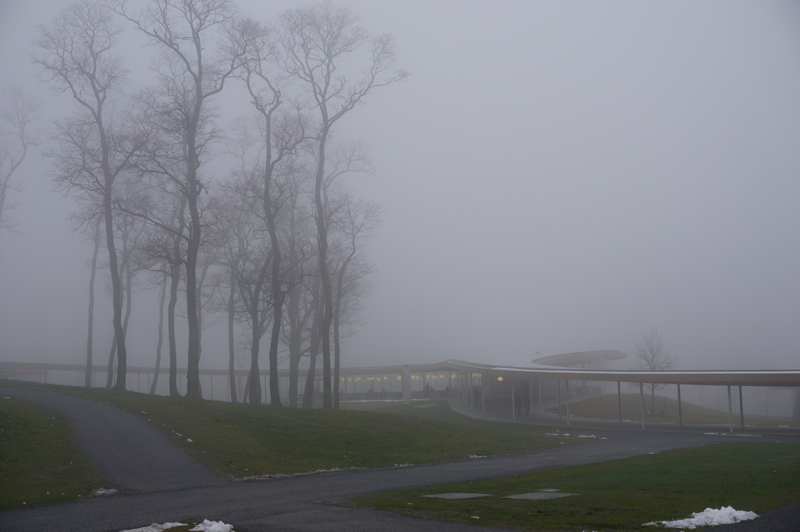 There are a ton of other articles from more respectable outlets than CTMQ – but how many of them have actually been here? Hmmm.

Grace Farms is everything they say they are: free, beautiful, open, and welcoming. I was sort of happy that we came on a foggy day; every other picture I see is bright and sunny; showing off all the glass walls and shiny aluminum. I think my pictures are pretty cool though, as the beauty of the architecture shines through the peaceful gloom of the cold fog. 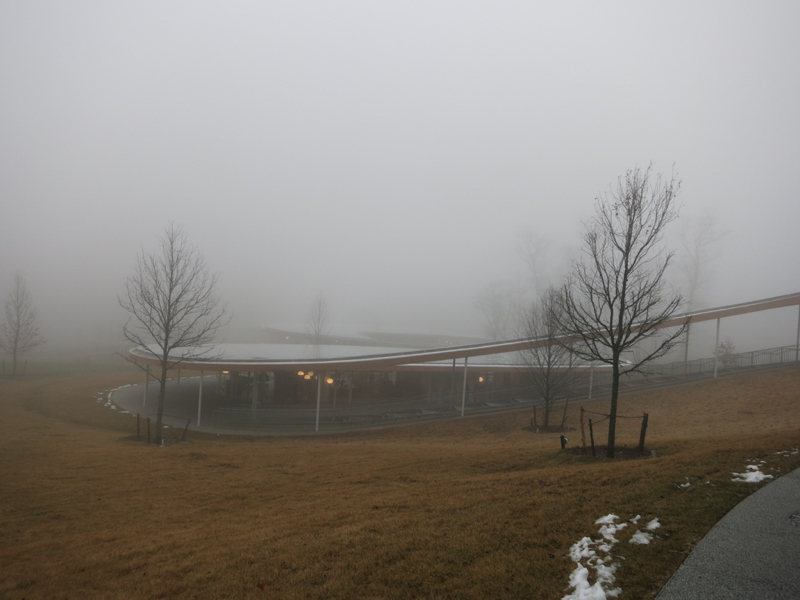 We walked to the top of the structure that contains the sanctuary. The super clean and airy sanctuary. We looked in on the library and I really, really wanted to go in there and chill with a book or two from its shelves.

Alas, I had two little boys with me.

As we wound our way down towards the Commons and its small dining area, I was a little bummed that we couldn’t see the full breadth of the grounds. I decided that I’d be revisiting Grace Farms anyway, alone, and I’d be able to spend the hours here that this place deserves. 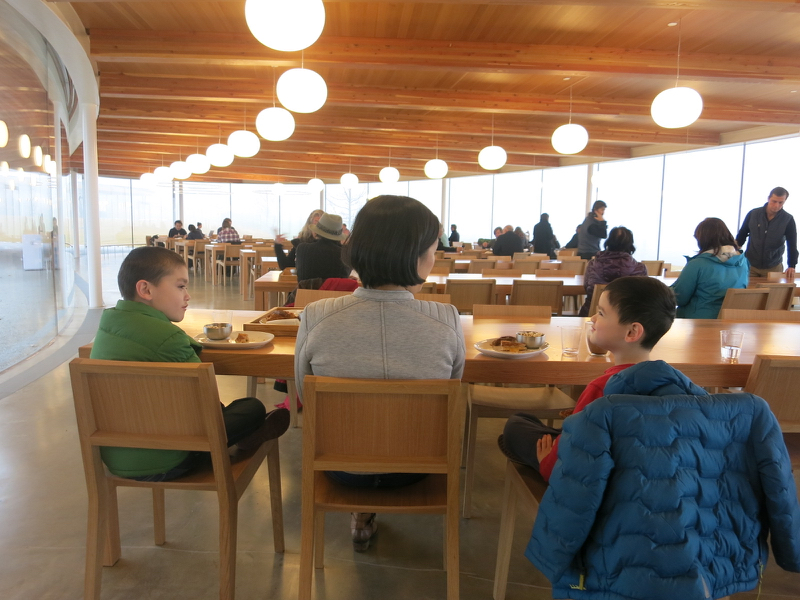 For now, it was on to the little cafe place and four grilled cheeses and two hot cocoas for $32. Ah, so that’s how everything else is free!

Just kidding, I knew the food prices would be absurd. That’s just how these places are. The food was very good at least and again, the space itself is stunning.

Grace Farms is pristine. There is an almost “Twilight Zone” quality about it, with freshly scrubbed worker bees zipping about, cleaning, dusting, rearranging furniture constantly. They sort of blend in with the visitors, but if you take a moment and begin to notice them, in their handsome blue vests, you realize they are everywhere, seamlessly keeping Grace Farms in the state that it deserves. 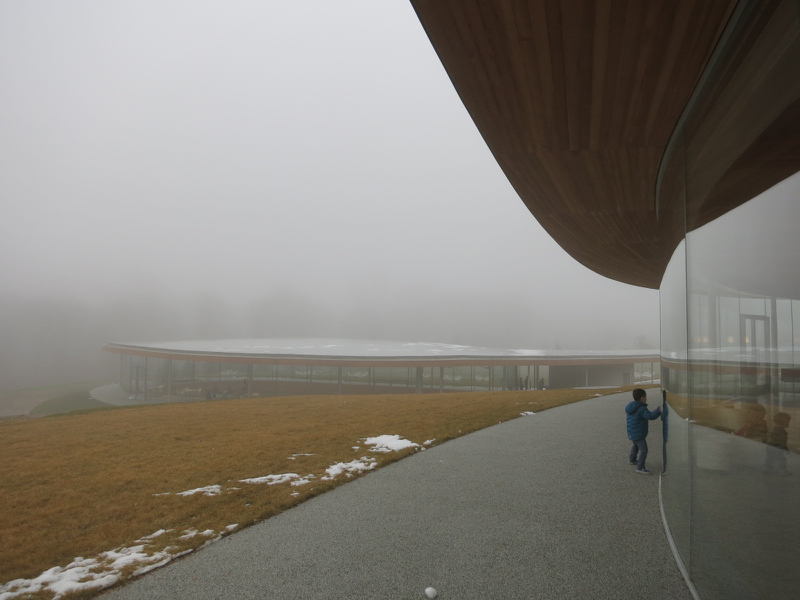 Oh, there’s a little movie theater here that shows free movies all the time. Seriously. I poked around the basement hallways near the theater and found some random blue-vested guy painting the inside walls of a closet white. Such are things at Grace Farms.

Where even the bathrooms are minimalist art: 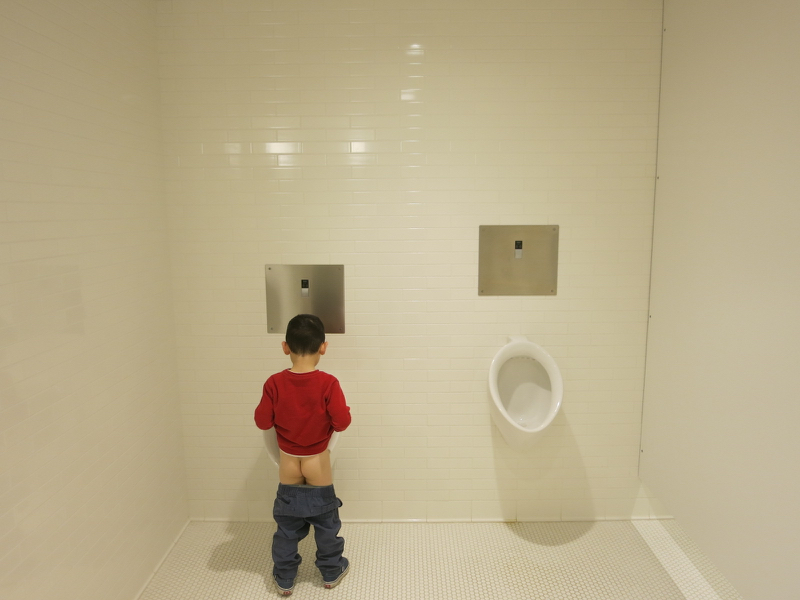 Such are things at Grace Farms

Calvin made a friend during lunch and the two of them played for 20 minutes together. No toys, few words… they just played some silly made up 4-year-old boys’ game. Such are things at Grace Farms.

I do have one mild complaint about one design element here. The walkway is a sort of polished raised river stone sort of affair. In wet weather, it is far more slippery than a sloped walkway should be. Calvin was running at one point and he slipped and fell; sliding along these raised stones on his hip. 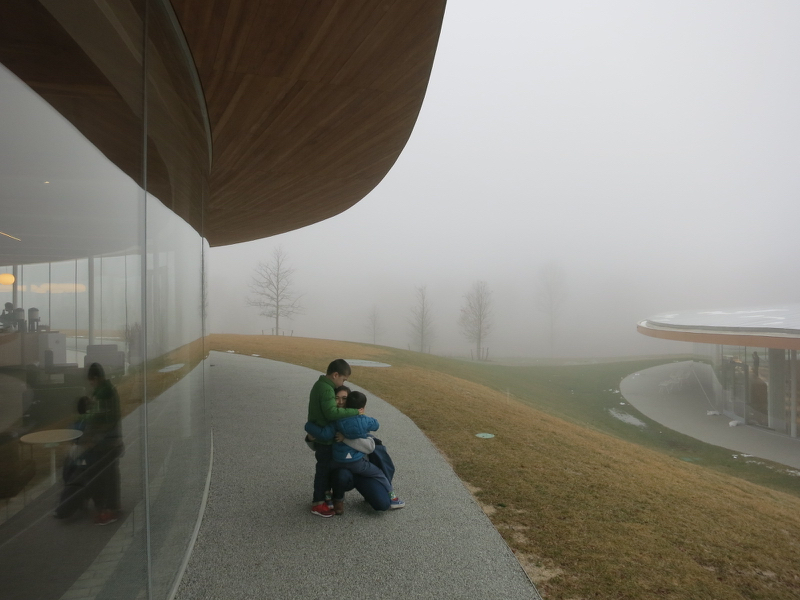 Of course, he was running and it was wet, but I imagine that proper women in heels may have issues as well.

Damian and I checked out the basketball court while Hoang tended to the injured party. It was, of course, a wonderfully clean basketball court. Wealthy New Canaan and Bedford boys were playing and I’m sure they weren’t fouling each other or anything. Such are things at Grace Farms.

I love this place and I love New Canaan for its committment to modern architecture. Now there are two internationally renowned designs in town with Grace Farms and of course Philip Johnson’s Glass House (CTMQ Visit here).

I will definitely return multiple times over the next decade or two. I suggest you do the same. Here are some more pictures: 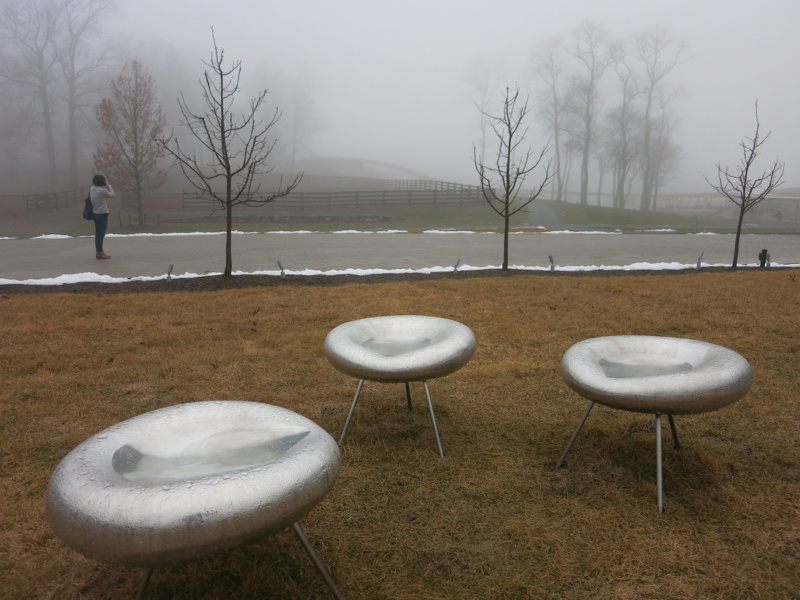 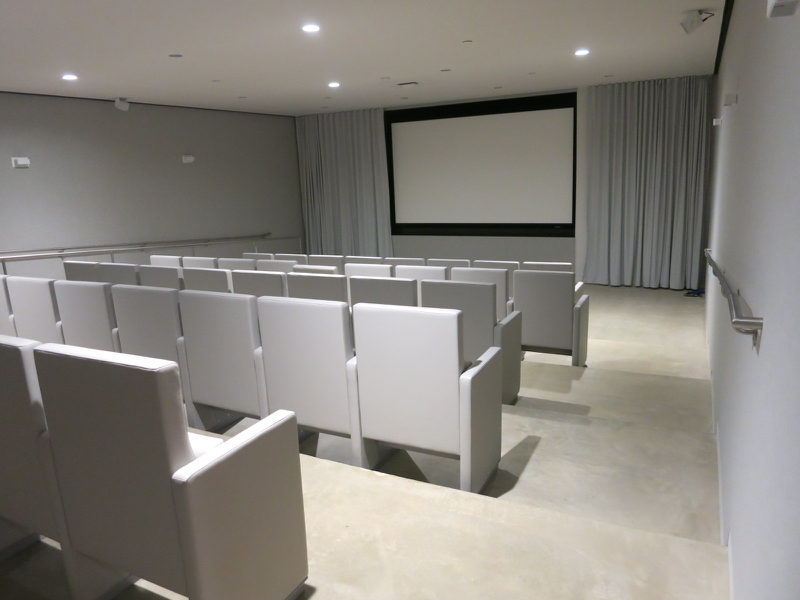 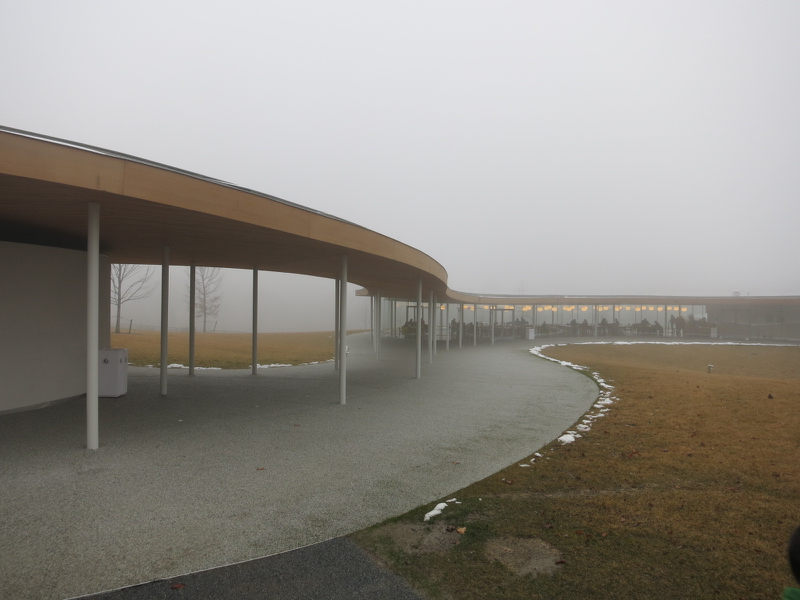 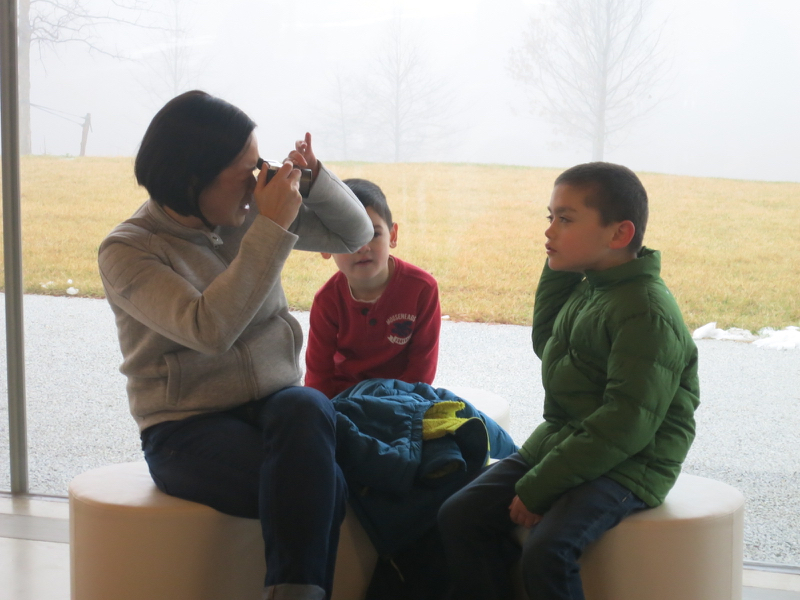 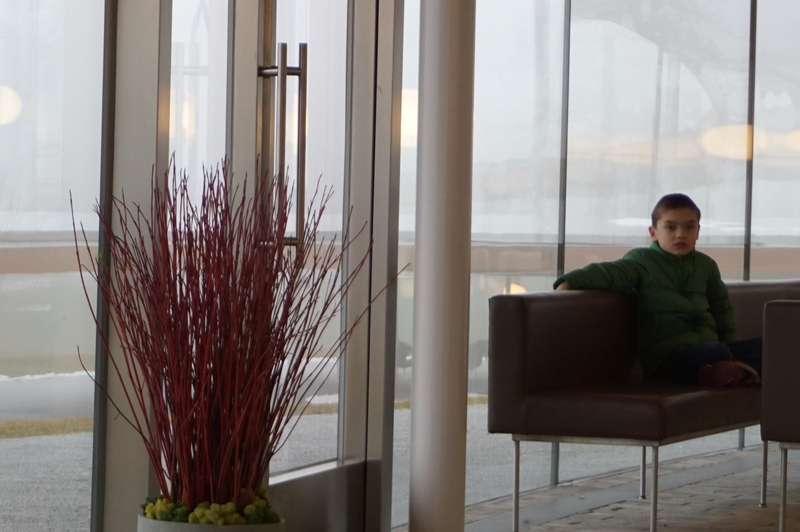 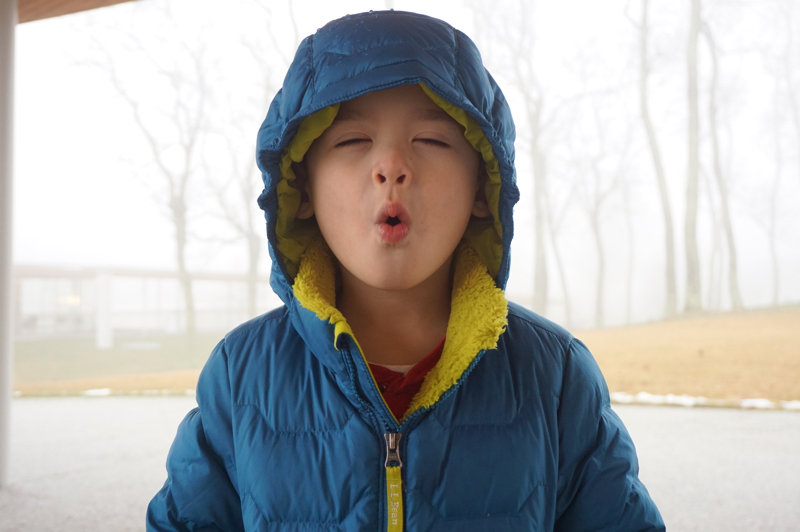 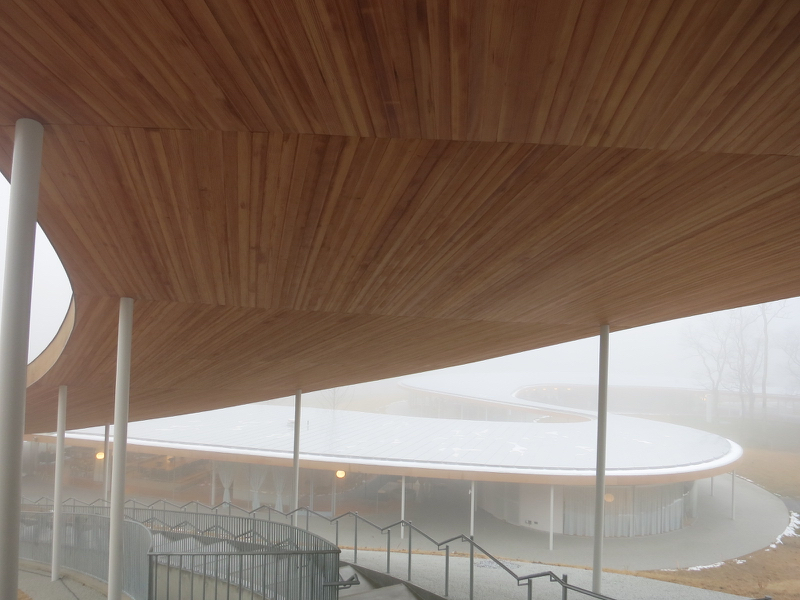 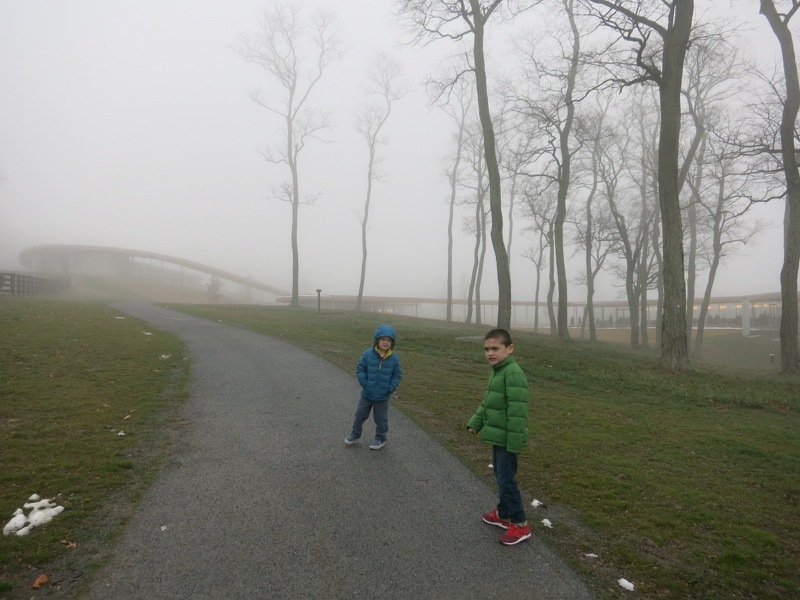 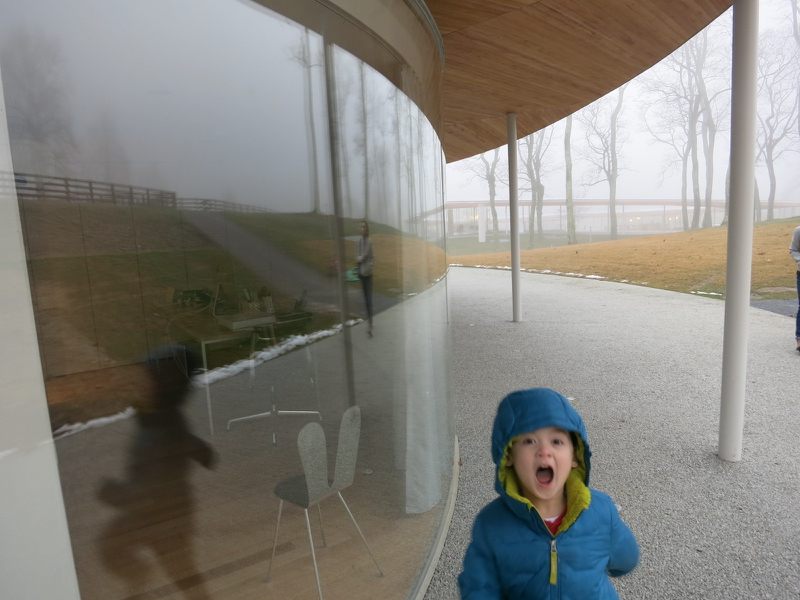 Ok, one more from my phone. 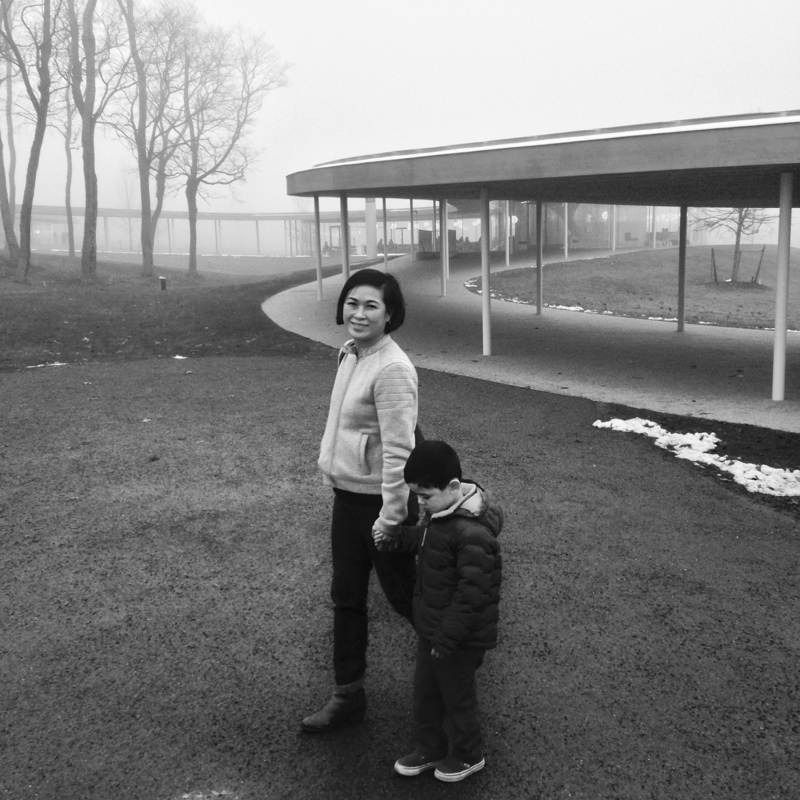