All it Takes is a Ninja
Holcomb Farm (East), Granby
April 2018

Anyone who has read more than a few pages on this website knows my older son has some very challenging special needs. Suffice it to say, hiking is not his thing. But I am patient and stubborn and I know that hiking is good for him. 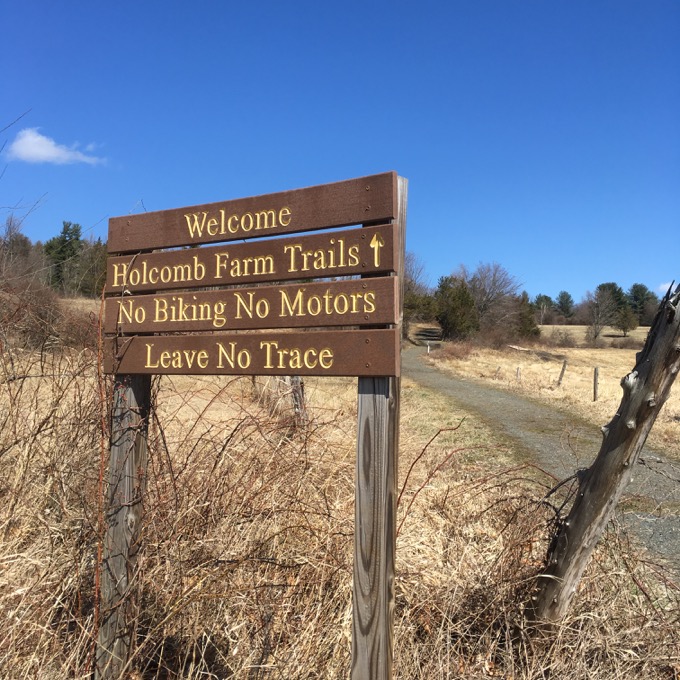 However, sometimes there is just no way to move him along. Such was the case in early April when I tried to take Damian for a walk at Holcomb Farm. He wasn’t having it. And when Damian isn’t “having it,” it’s ugly.

He screams. He throws himself on the ground. And he displays self-injury in the form of punching himself repeated in the head and face. Our first trip to the rolling fields and woods at Holcomb was an unmitigated disaster. 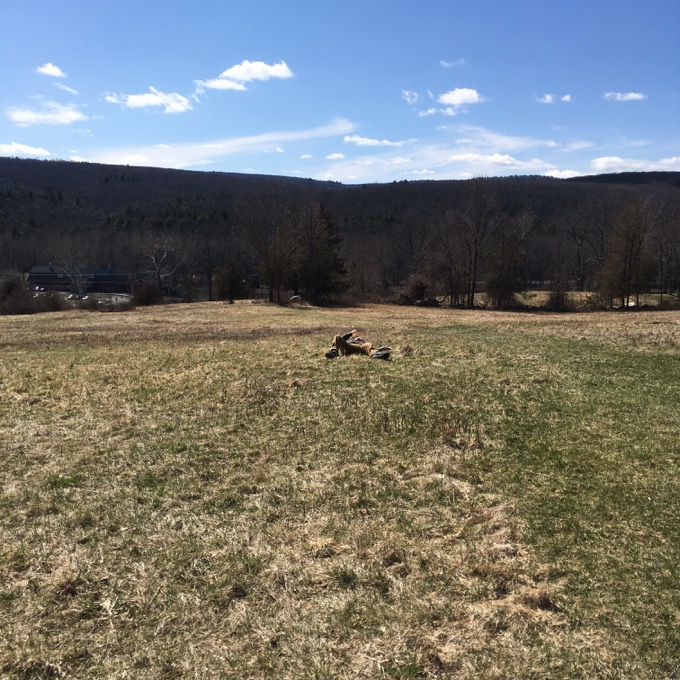 The crumple on the ground in the distance is Damian.

I know when his rare syndrome has won the day. We made it a few minutes up the first hill to the lookout bench and then went home. Sigh.

Flash-forward a couple weeks and we tried again. This time I had Damian’s little brother Calvin with us. I took a deep breath and began the same walk with the boys up the same hill to the same bench. 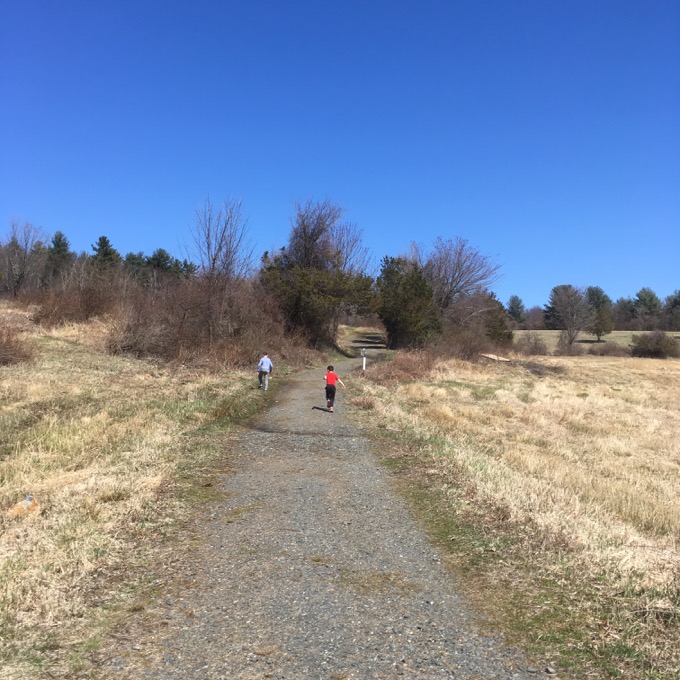 Complicity! Damian even said, in his stilted, barely intelligible way, “I’m not. Going to. Punch myself.”

And he didn’t! We made it back up to the same bench and continued onward into the woods of the eastern half of Holcomb Farm! This is what parenting a kid like Damian is all about. Try and try again. What happened last time happened last time. This time might be wholly different. 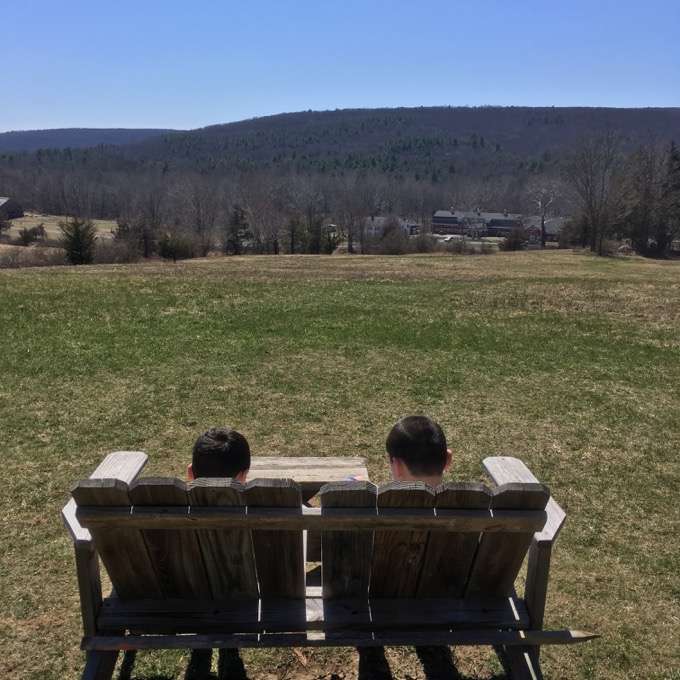 This bench looks out across to the ridge and woods of the western half of Holcomb Farm’s trail system. When I hiked over there with Calvin and my dad a few weeks prior, we noted a lookout rock that takes in a view – including this very bench.

Such a relaxing bench! Quite a different Damian than I got the first time we were here. 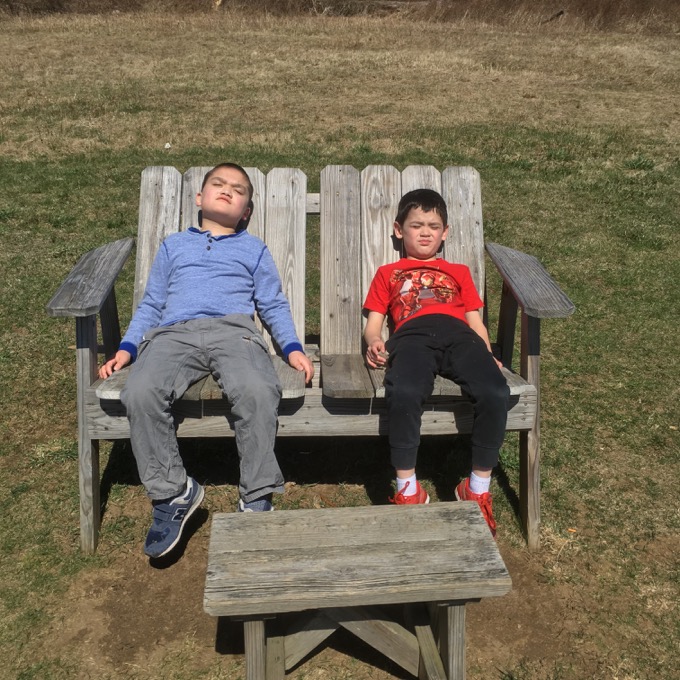 Turns out, all Damian needed was his ninja brother.

Yes, for today’s adventure, Calvin decided to go full-on ninja. Oh, sure, he’s gone half-ninja before, but at Holcomb Farm? We’re talkin’ Shogun Shinobi Naruto ninja. In fact, he had just celebrated his birthday and this outfit was one of his gifts: 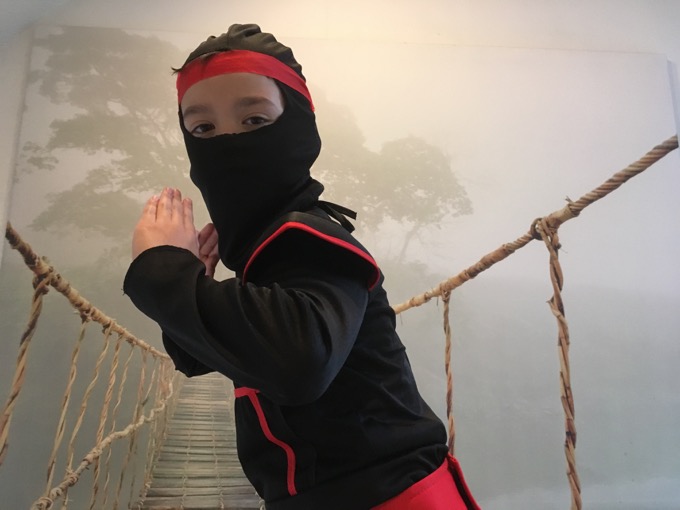 I think I’ve set the scene.

Holcomb Farm’s eastern half is trailed similarly to its western half. There are several radiating loop trails. As with our hike of the other side, we took on all loops. Also, just like the other side, the Holcomb trails connect to other trails – in this case, McLean Game Refuge trails – so you may continue your journey off further than we did if you wish. 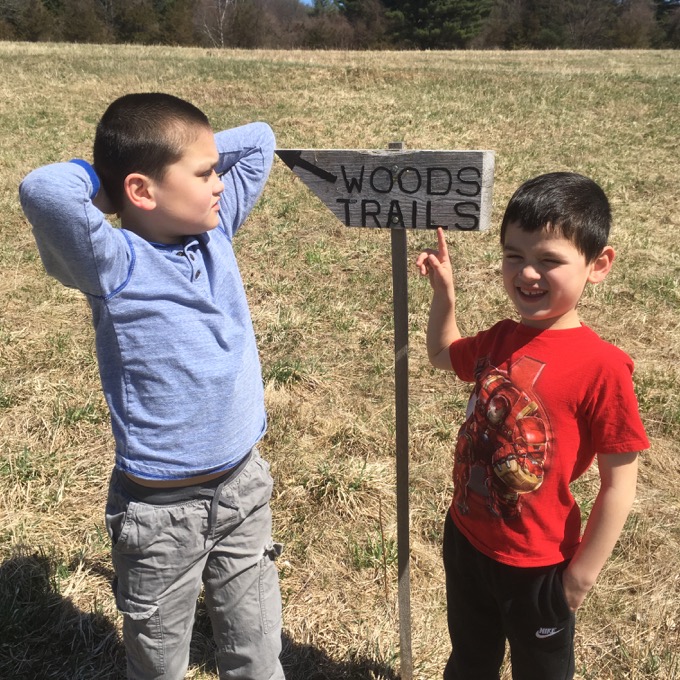 What’s weird about that is that McLean has this idiotic policy of not connecting to the excellent trail systems it abuts. Granby Land Trust, Simsbury Land Trust… both connect, but not “officially.” It’s very frustrating. 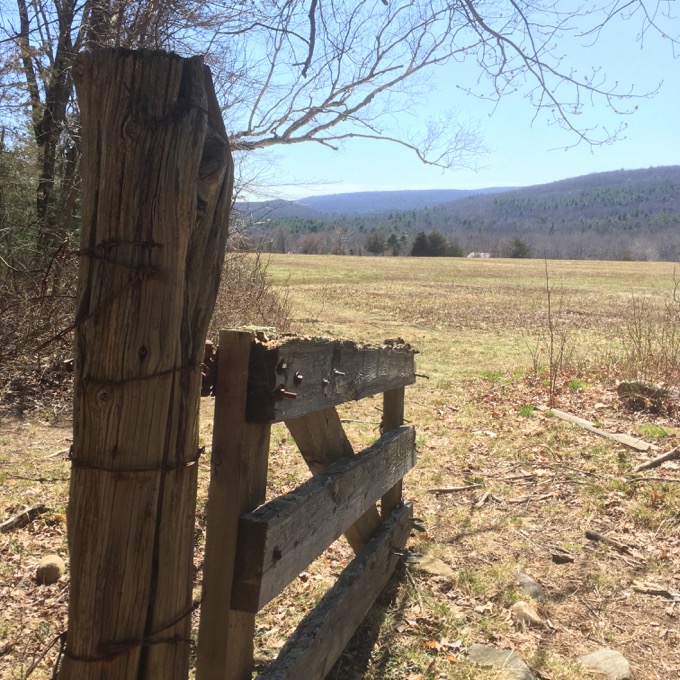 And yet… and yet, Holcomb Farm doesn’t care. Hats off to Holcomb Farm! They have signs that say, “TO MCLEAN GAME REFUGE,” which I’ve always understood to be against McLean Law. Dear Holcomb Farm, I’ve got your back. I’ve written a few screeds against McLean’s weird policy and I think it hurts us all in the end. 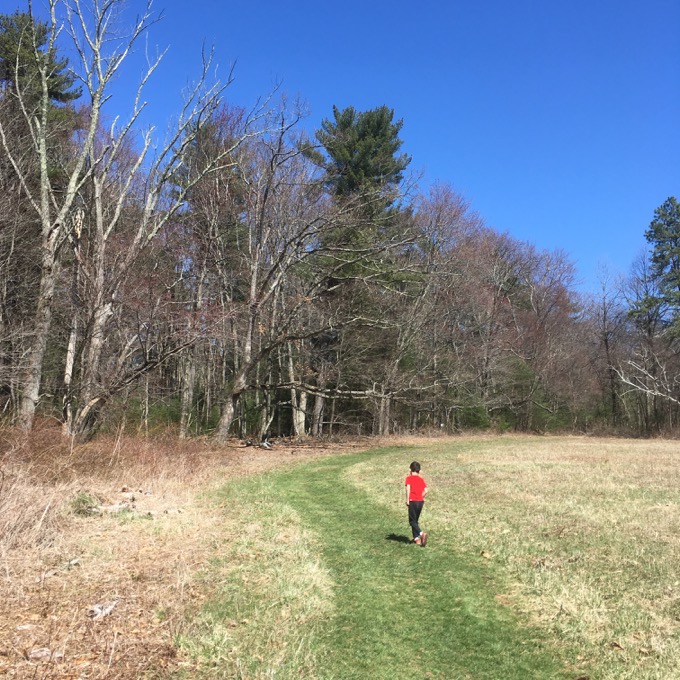 CONNECT TO MCLEAN! NO ONE CAN STOP YOU! 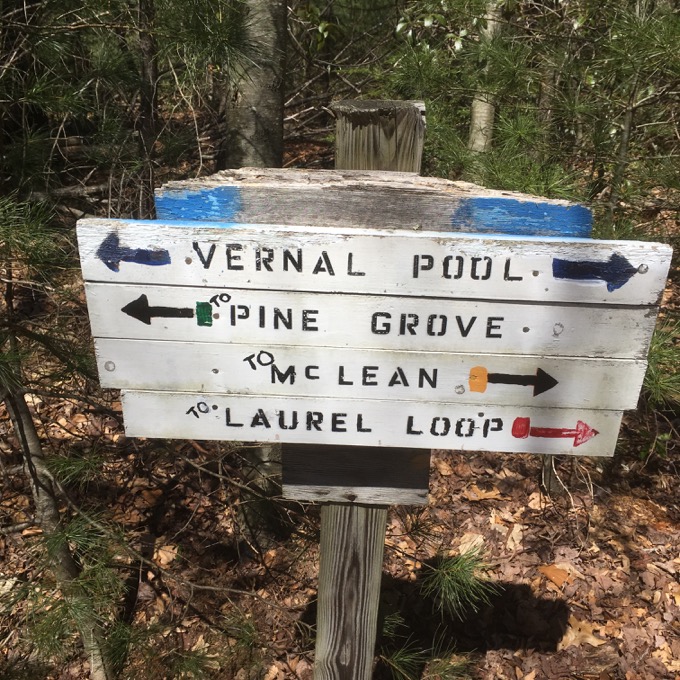 The trails here are standard north central Connecticut trails. Some hemlock, some pine, some hardwoods. A stream here, a dip and rise there. Calvin used the woods as his training ground. Every downed tree was a ninja test. 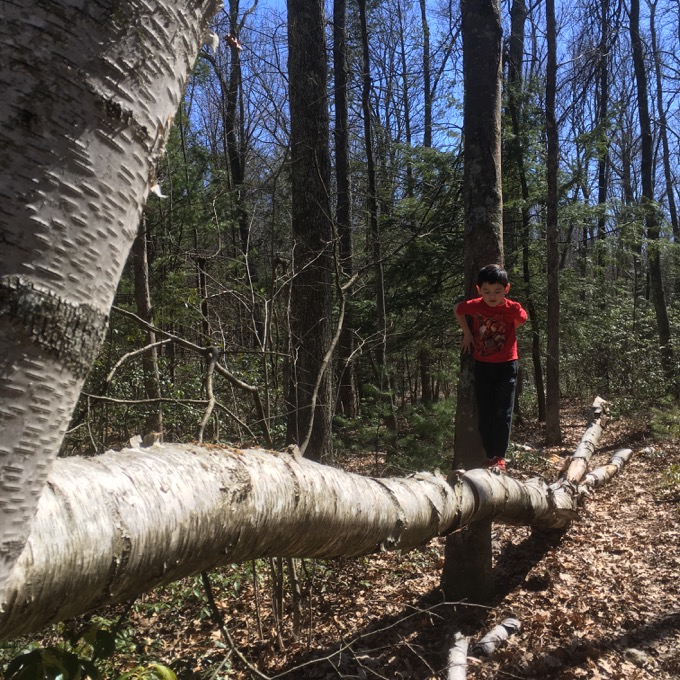 No, really, every. Downed. Tree. 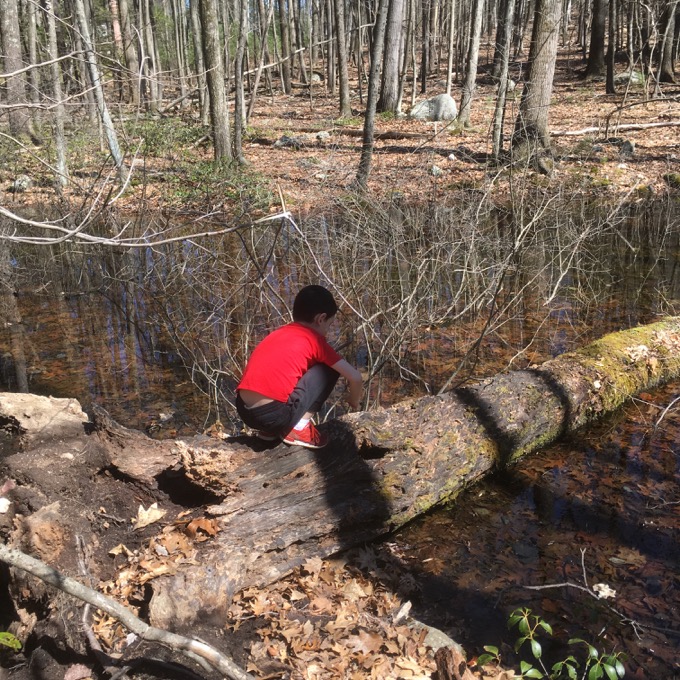 And not just downed trees, but split trees provided cover for sneak attacks. 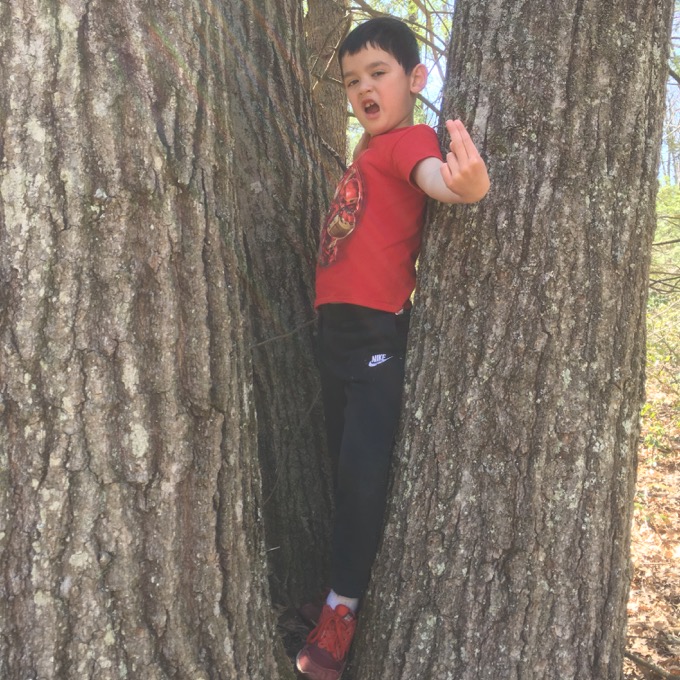 I love this kid. If you can’t tell. And as for Damian, I love him too. Here we were, just a couple weeks after his impossibly difficult outing at the same property, gamely trudging along while his little brother flitted about, being all ninja-like.

There was one time when Damian disrupted the mojo at the imaginary dojo though: 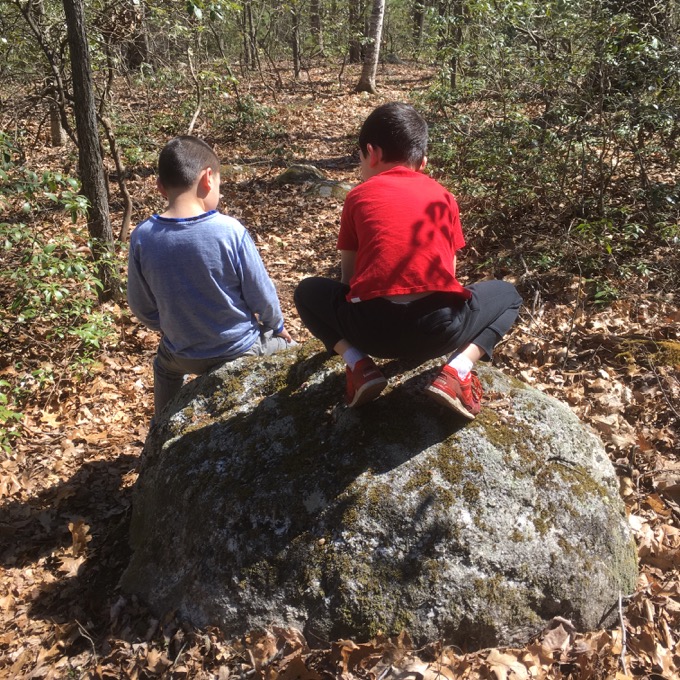 Calvin needed to perform the dreaded and precise leap attack, but he had this lump of a human in his way. Get. Out. Of. The. Way. 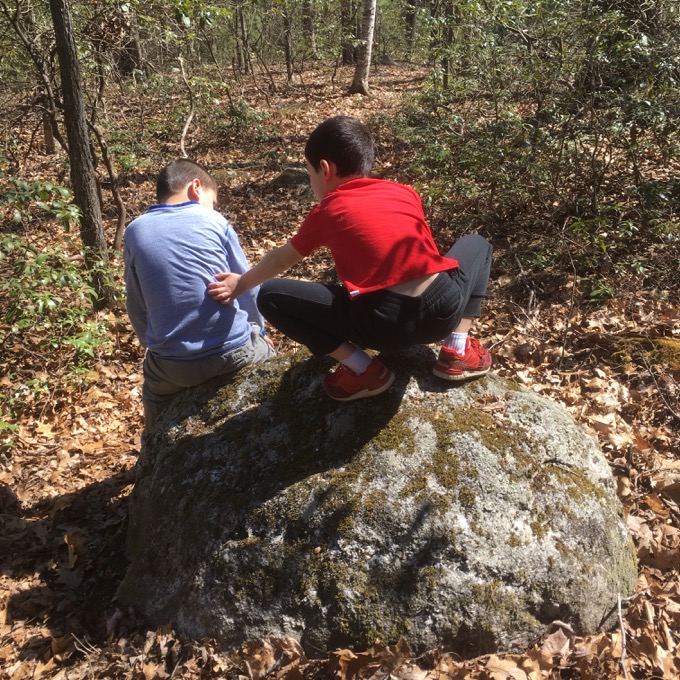 I think Calvin ended up dispatching his brother there for the 18th time during the hike. Fortunately, Damian is resilient.

We made our way to the far reaches of the property and the connector trail to McLean. One trail led steeply down a hill to McLean – and I mean STEEPLY. Like, one of the steepest trails I’ve seen in the entire state. 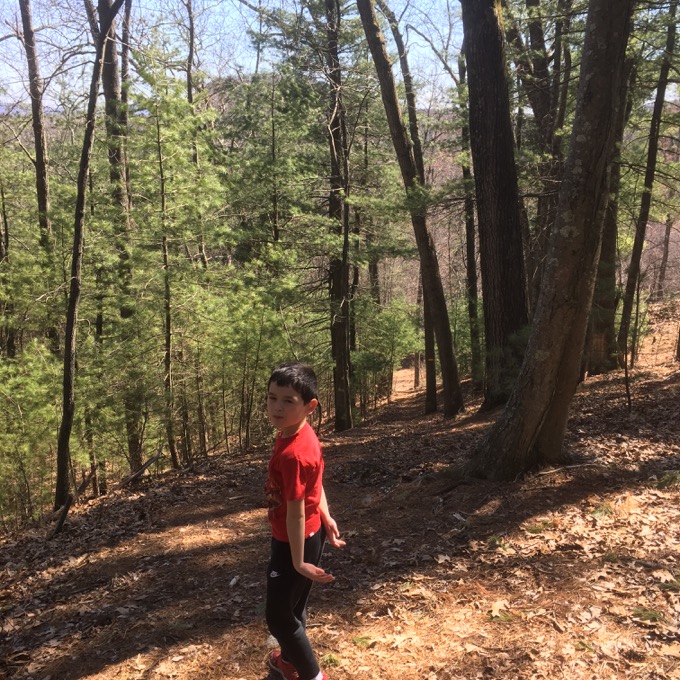 Calvin, of course, wanted to “run” down it. I calmly explained to him that meant he’d have to turn ninja tail and make the slog back up it immediately thereafter. It took some convincing, but he fortunately heeded my caution and didn’t go for it.

Even ninjas must listen to their sensei now and then. So the boys took a break at the top of the hill and pondered life and stuff. 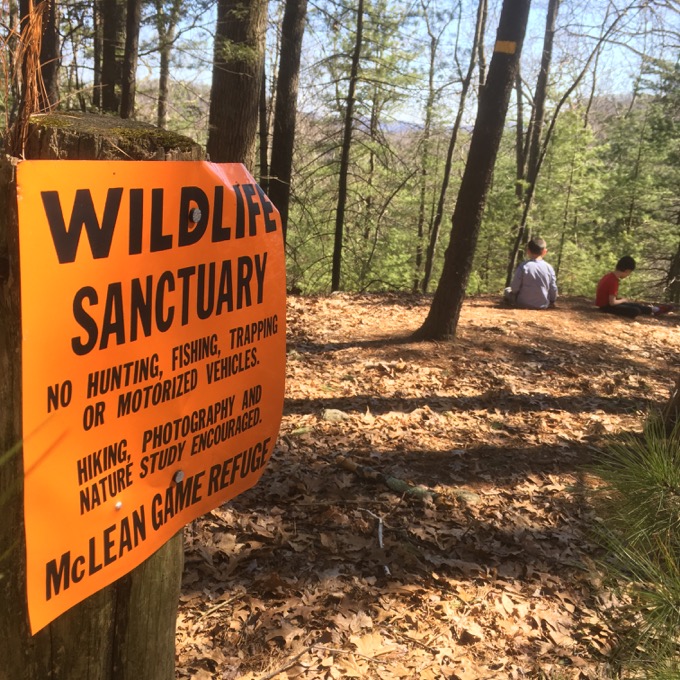 From that point, we began to meander back to the parking lot at the farm. We had walked most of the blue, green, yellow and orange trails, and now it was on to the red which would take us back to the farm fields. 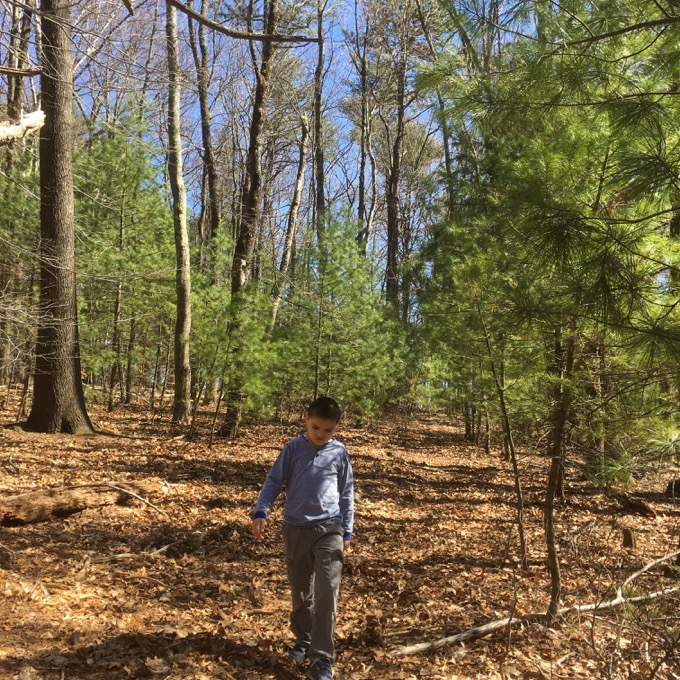 The walk back began pleasantly enough, through a large stand of white pine and across a few little streams. There are bridges here for mere mortals like you, me, and Damian. However, as you are surely aware, ninjas don’t do bridges. That’s just what the enemy would expect. 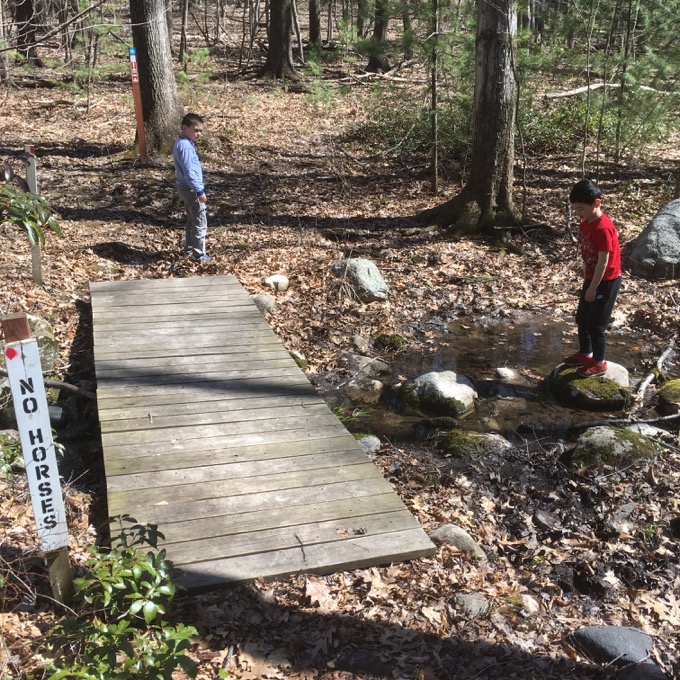 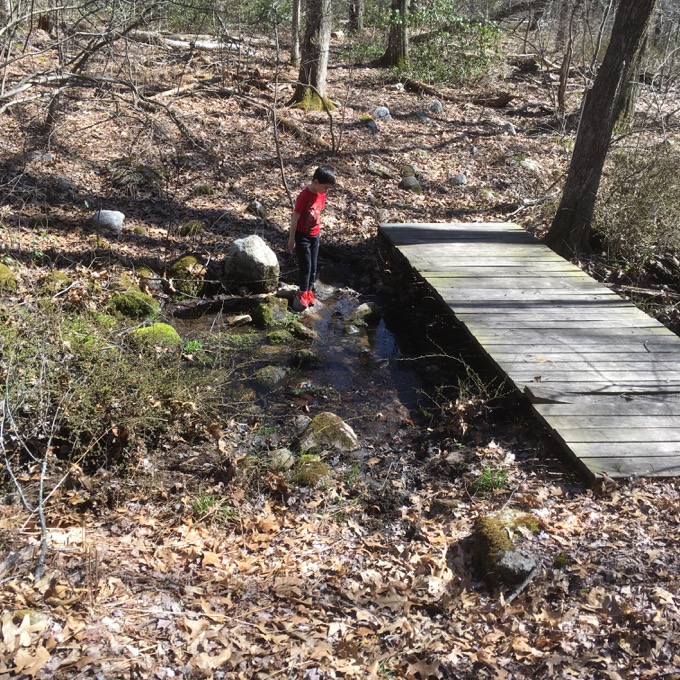 As we neared the fields again, the ground became muddy. Downright boggy. I assume these areas are dry in the summer and fall, but in the spring? It was a mess. 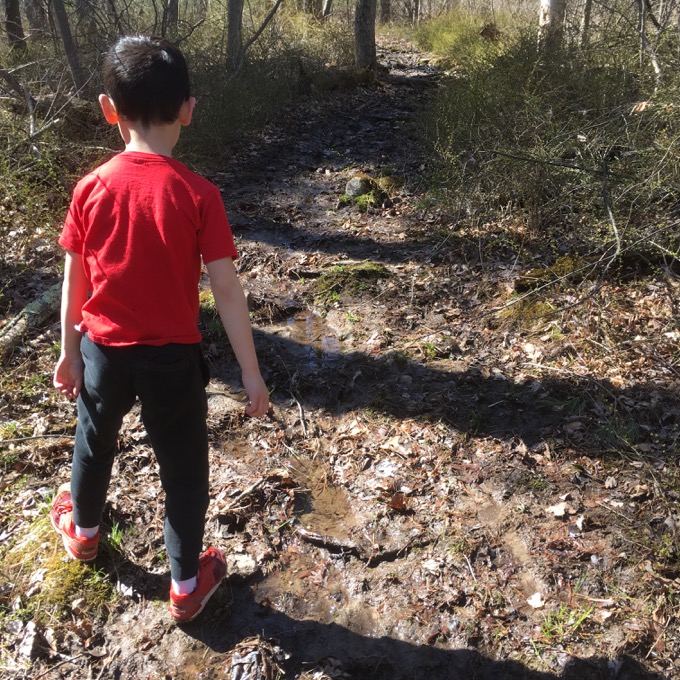 And here’s the thing – Damian hates unsure footing and Calvin has some weird hangup about getting his shoes muddy/wet. Fortunately, Calvin is a ninja and was able to almost float over the muddy areas. (Joking aside, the boy managed to stay almost completely dry and clean, which was rather amazing.) 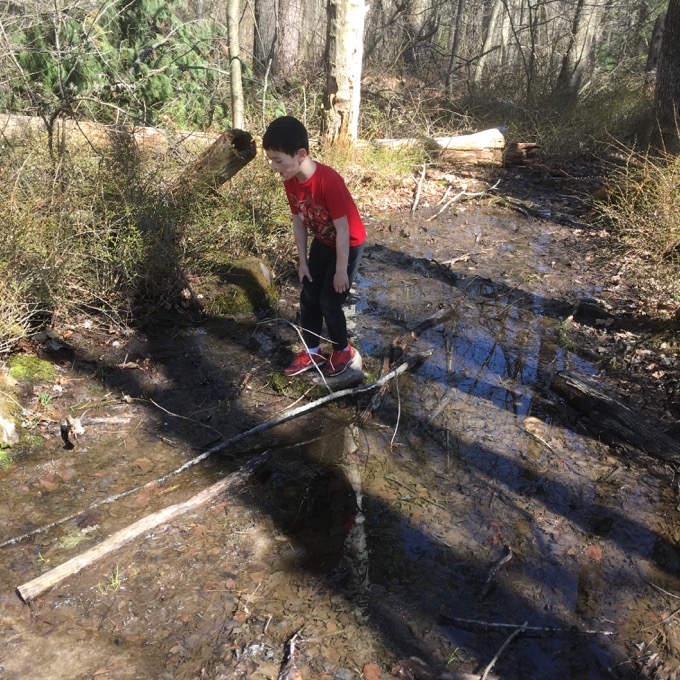 As for Damian, he “floated” over the worst areas because his father carried his sack-of-potatoes butt every five feet. Otherwise, we’d still be waiting for him in the hills of Granby to take that first unsure step. 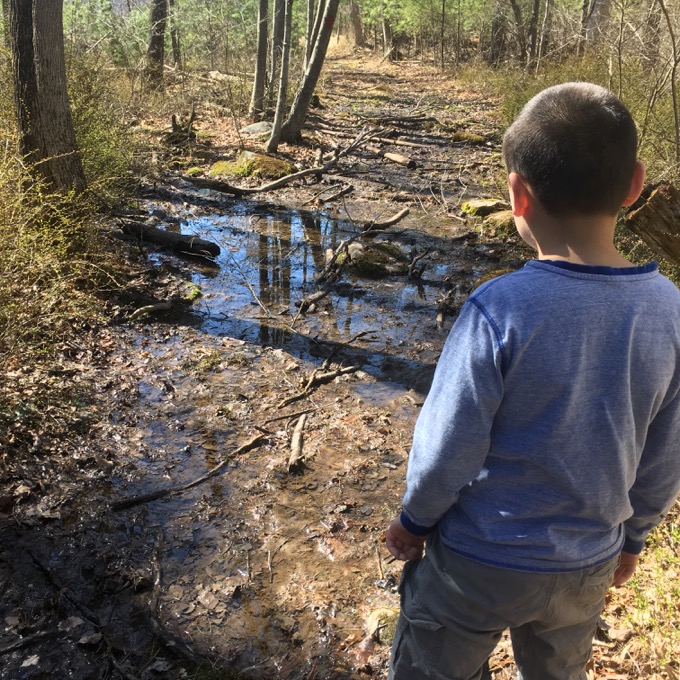 Then again, at one point when I told him to “WAIT, DON’T MOVE” after which he confidently stepped in several inches of muck and merely said, “Whoops.” That’s our Damian. 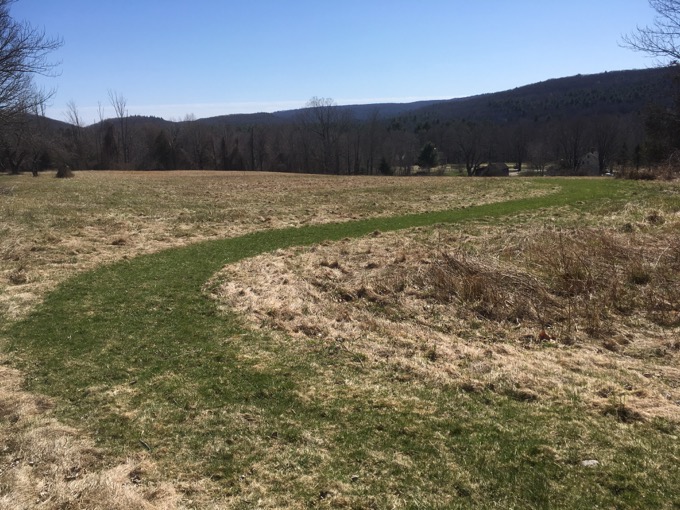 The farmed fields offered no respite from the mud. Stepping in the wrong spot could mean losing a shoe, so it was slow going for us, even as the promise of the car and ice cream was almost within sight. We made it through, relatively unscathed, and found our way back to the gravel path down to the car. 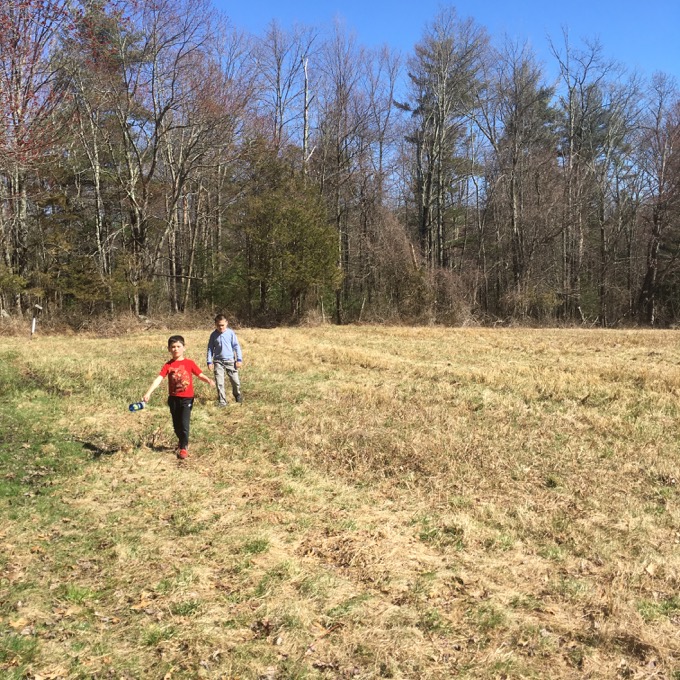 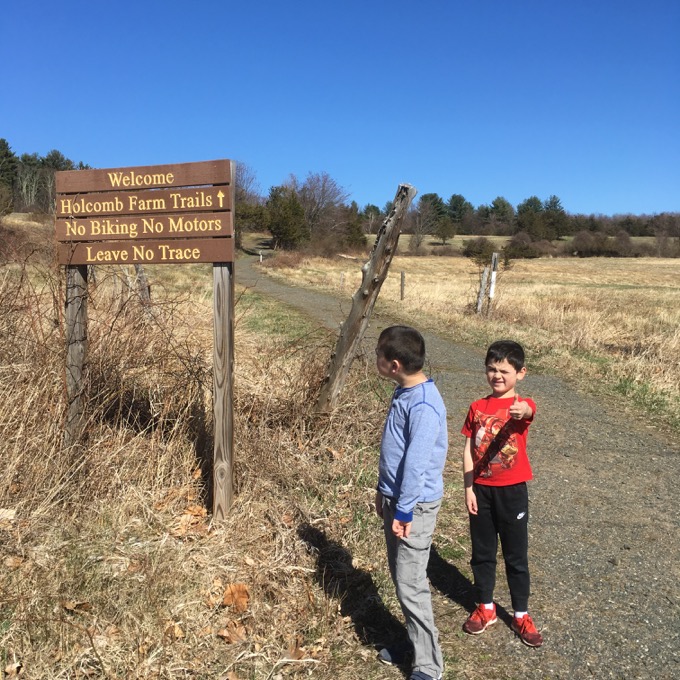 And then, as promised, we drove over to the wondrous Grass Roots for some of the best ice cream in the state. 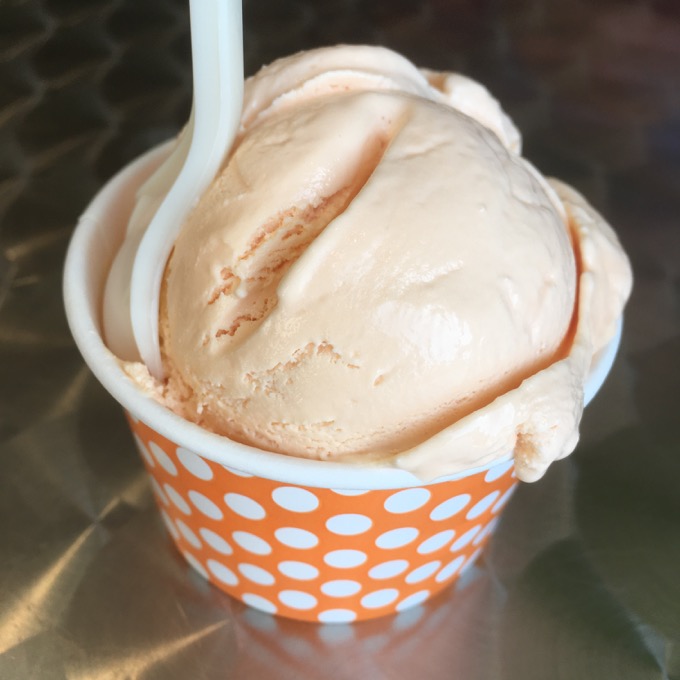