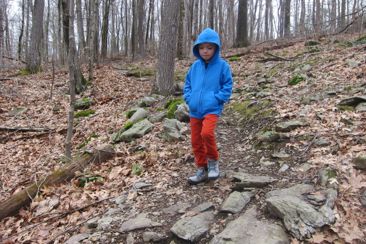 I could get used to this.

Short drives, excited sons, cool hikes of perfect (for them) lengths. Perfect in the sense that it exhausts them, but don’t mentally or physically damage them. By my figuring, I can do this pretty much every weekend for the next year or two just in the towns surrounding my own – factoring in weather and other activities, of course.

And even better, both boys are getting more adept at walking up and down hills and over rocky terrain. Calvin was turning three the week of this trek and Damian’s difficulties stem from his developmental delays, but he’d doing better each time out.

With the forecasters calling for mid 50’s and sunshine (which never materialized until much later), and my wife calling for a few hours to herself, I packed up the boys and hit the road down to Glastonbury for our first foray onto the town’s trails. 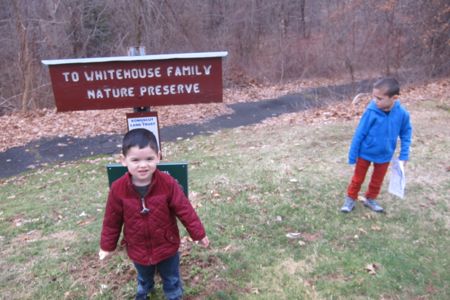 I had originally intended to access the properties via the right-of-way at the cul-du-sac on Tall Timbers Drive, but I was unclear where it was (and it seemed strange to park there anyway.) So I drove down back to the lower access point on Tall Timbers Road with the signage and better parking situation. 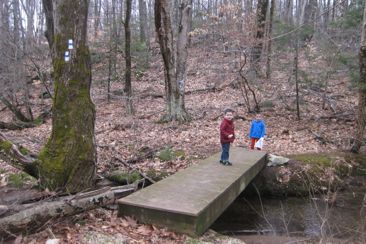 This area is actually a couple different preserves, but the only issue that brings up is that it is annoying to write the name of it on this page.

The trails are well-marked and cleared very nicely. This is probably, by a wide margin, the most popular KLT property, so I think they take pains to take care of it.

We chose a clockwise loop, heading left at the junction with the access trail. The loop trail is blazed white, despite the old brochure saying gray.

This brings up something very odd about the Hollister and Whitehouse Family Nature Preserves map. It’s upside-down. 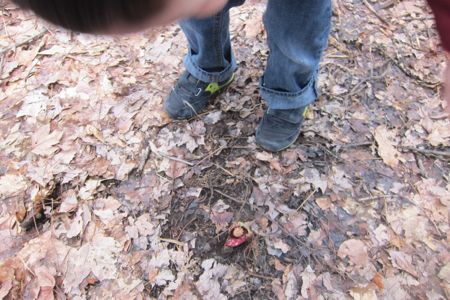 First skunk cabbage of the season

Of course, that’s sort of impossible as long as everything is in scale and correctly oriented, but I still say its upside-down.

Check it out. Notice anything weird off the bat? As I was driving to Tall Timbers Road down New London Turnpike, I noticed it immediately. Because its upside-down!

Look at the north-south bearing at the bottom. I’ve hiked 1,000 maps in my ilfe and have stared obsessively at 1,000’s more. I can’t really think of any other time when I’ve seen a map that has north pointing down. 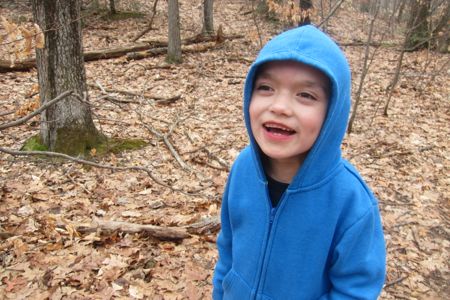 For a person like me, with hyper-awareness and sensitivity about compass direction and my orientation to it at all times (yes, I know, you don’t understand it, but trust me), this really messed with me. I joke that if I had to give my three best attributes, one would absolutely be my general sense of 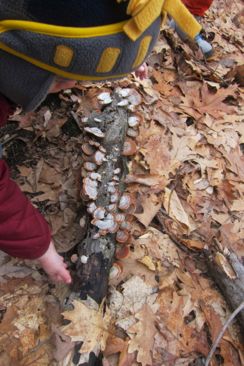 direction and awareness of where I am and which way I have to go at all times. It’s innate – I’m sure of it.

So as I drove towards the property, the map was upside down and I was bothered. While hiking, and knowing where Hartford was in the real world versus where it “should be” in the 2-D map world, my internal gyroscope was thrown wonky.

I don’t hold it against the fine people at the KLT… Unless they did this just to mess with people like me who care about this stuff and are actually affected by it. What say you, KLT?

The trek up the hill is pleasant enough and not too difficult. Even my boys made it up without help. You can see houses almost the entire time on this trail, so you never really get that “remote” feeling as you do in some other more southern and eastern Glastonbury hikes. Yet, it doesn’t really matter here. In fact, I pretty much forgot about the houses once on top of the ridgeline.

There are two views on the trail, the first being a seasonal (yet still slightly obscured) northwestern view called “Whitehouse vista.” 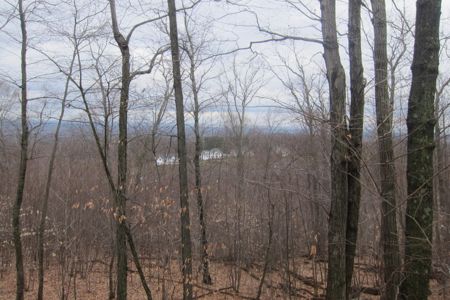 See that? Three white houses! Clever! Except that it’s named for the Whitehouse family. I wonder if there’s an ordinance that those house have to be white? Probably. Right? 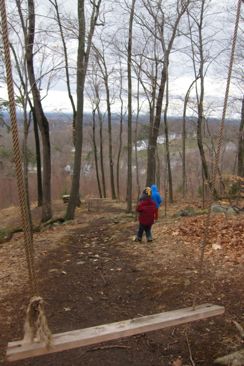 There is a side trail we skipped that heads off to an abandoned feldspar quarry. Past the Whitehouse Vista another side trail heads out to a third parking area at the end of Sherwood Drive. (If all you want to do is go to the view with minimal effort, that’s your best bet.)

We made it to Dorothy’s Vista and the boys were excited. I think they thought we were done for the day, but no such luck. There is a swing (!) up there and a picnic table. The view of the Connecticut River Valley and of our fair Hartford is excellent.

I showed these pictures to a Glastonbury loving coworker and she had no idea about this place. Then she asked me if this was an accessible place or “just one of those weird Steve Wood things.”

Sigh. You see what I put up with for you people?

The story has a happy ending though, as she will be dog-sitting near the trail soon and plans to check it out. That makes me happy. 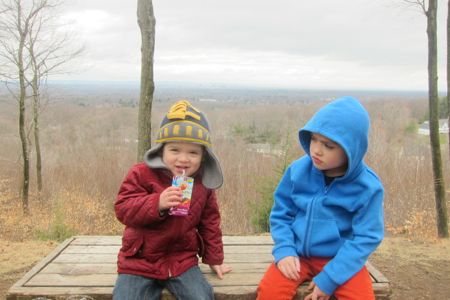 We met a family of four at the viewpoint, from which I’m told one can see the Holyoke range and Springfield on a clear day, and began to head down the trail. In hindsight, I probably should have turned tail and retraced our steps, but I wanted to push my boys a little bit, so we went the long way. 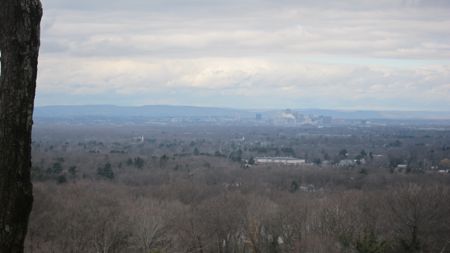 And, as a result, got a full Hollister and Whitehouse Family Nature Preserve experience. Both boys navigated the sometimes steep descent well. Calvin bound down with abandon and Damian gingerly picked his way, measuring each step – but he did it! Without asking for help at all. This was pretty huge for him, trust me. 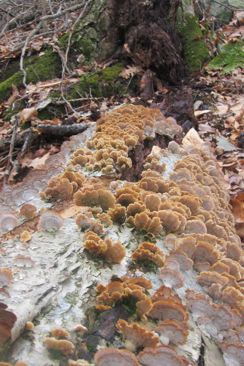 Was it his little brother urging him on from ahead? “Come on, D! I’m waiting, D!” Or just a developmental step forward? Whichever, I’ll take it, no matter how slowly.

The walk along Smith Brook was flat but often quite muddy. There is a substantial flood plain here and this brook clearly oversteps its bounds fairly often, so be careful. By this point, my sons were fairly exhausted – Calvin getting over a nasty cold and Damian … actually Damian was doing really well. In fact, he told me he had to go pee for only the fifth time in his life and proceeded to do so outside for the first time in his life.

He exclaimed, “This is not a toilet” and was frustrated the tree didn’t flush, but we got past that pretty quickly. There is a cool geologic formation near the end of this loop where the ancient rock just sort of juts out awkwardly. There are more benches along the brook which I’m sure are great for tired people.

But we had lunch to attend to, so I pushed them across the bridge and back up the hill to car and home.

Like I said… I love this stuff. Well done, boys, well done. 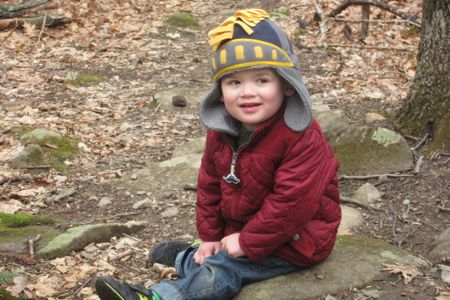 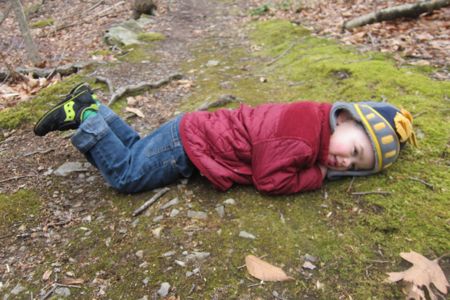 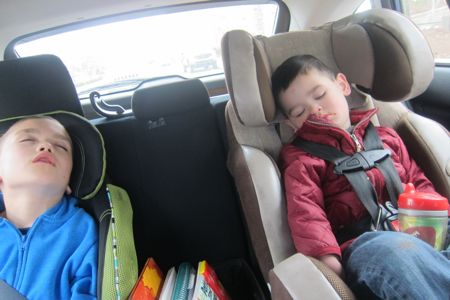