I’m proud of the fact that I have a lot of stuff on the site that serves to surprise readers. There are tons of things around Connecticut that are US Firsts and/or US Only’s and even some Biggests in the US and world. Oh sure, I could rattle off a bunch, but I’d rather you poke around and find some yourself. Go ahead… Take your time. You’ll be shocked and amazed. 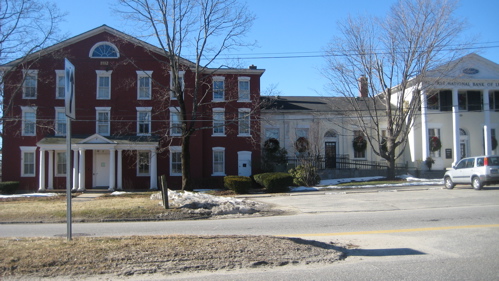 Now, it’s not like I intrinsically know about all this stuff. I’ve done (and continue to do) my research. I get emails all the time from readers offering tips or asking questions that pique my curiosity. However, this one is different; upon learning that our Saturday adventure would take us out to Litchfield, Hoang off-handedly joked, “Are we going to buy that old jail that’s for sale there?”

Huh? I had no idea what she was talking about so I poked around. Initially I thought, Hm, that’s a slightly odd little story and I’m glad I know it now, but so what? It’s an old jail right on the historic town green that looks like an old stately mansion, which I guess is sort of cool. From the local CBS station’s website:

In an effort to raise $60 million, the state will be selling off what it calls “surplus real estate.” One of the items on the list is the old jailhouse in Litchfield.

When it comes to real estate, you can’t beat a spot right on the Litchfield green, and the building is nothing if not historic.

Built in 1812, it’s the oldest public building in town and one of the oldest penal facilities in the state. Cathy Fields of the Litchfield Historical Society said, “It stopped being used as a jail, I think, in 1994. Then it was McAuliff Manor, which was a halfway house for women until last year (2008), and it’s been empty for a while.”

For much of its life, the jail was considered a country club for folks convicted of minor crimes. The suspects came and left as they wished, and one was even arrested trying to get back inside of the jail. 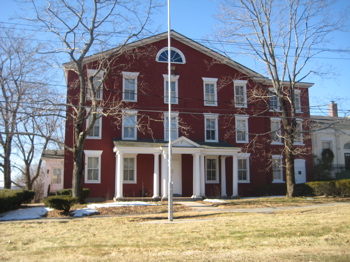 Now that’s just silly. But again, is that really worth noting on this esteemed blog? Let’s see what the local NBC site has to say:

For nearly two centuries, there’s been a jail in the heart of Litchfield and the way it’s built, it could be there another two centuries. That’s just one of the problems anyone interested in taking it off the state government’s hands would face.

The state Department of Public Works opened the jail on Friday morning to prospective buyers, with three weeks until bids to buy the building are due. One official grumbled that it couldn’t be sold in three years.

Dozens of curious residents toured the cells, noting the solid brick walls and absence of natural light, not to mention the bars on the doors. One woman suggested that it might make for a good day care center.

For one man, Jim Gavell, the trip to the pokey was a step back to 1968 when he had a summer job as a guard. He recalled how the sheriff of Litchfield County lived in an apartment on the third floor of the hoosegow. Down on the first floor were two of the Black Panthers confined in Litchfield during their trial in New Haven. In solitary confinement, he said, an inmate would spend three days, with no toilet. “It was grim,” he said. “Now I don’t need to come back again.”

Man, that “one woman” had a good joke. She deserves to be named. Anyway, still not CTMQ-worthy, no matter how interesting the story is at this point. I was about to give up and ignore the old jail and then I came across this wonderful fact:

The building also has another distinction: In 1994, the First National Bank built an addition from the bank to the jail, so it was the only jail in the United States that shared a wall with a bank – the white building seen at the top of this page.

And now you know why you just read this page. 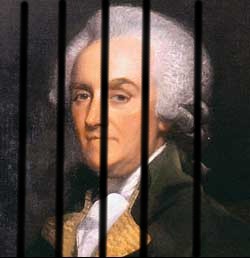 Genius Connecticut history buffs take note: This was not the Litchfield jail you may be thinking of. No, Benjamin Franklin’s Loyalist sell-out son William’s Litchfield pokey time predated this jail by 30 years. He served as the British appointed Governor of New Jersey much to his father’s chagrin. On January 8th 1776, Franklin was captured in Perth Amboy at his second home and placed under house arrest. Five months later, he was seized and brought to Burlington for questioning by the independence-minded Provincial Congress. As he refused to relinquish his authority, he was transported to Connecticut and held as a prisoner of war for 2½ years. And a horrible confinement it was.

Bill Franklin was taken to Litchfield, Connecticut, where he was eventually housed for eight months in a solitary cell with a floor covered with old straw matted from the waste of previous occupants. He was denied writing paper, clean clothes, and even bathing and toilet facilities. Benjamin even forbade William’s son, Temple, who was in Ben’s care, any contact with his imprisoned father. Urging him to abandon William, Benjamin offered his grandson the temptation of France, which the boy took. “I have rescued a valuable young man from the danger of being a Tory,” a satisfied Ben wrote.

A bit different from the country club jail in the pictures… In fact, while in jail William lost his hair, his teeth, his health and his wife, who died.

I bet he wouldn’t believe it to know now that Litchfield is the playground of many rich and famous Hollywood types.