The things I do for you people. The sacrifices… the pain. Things like eating overpriced so-so pizza at one of Connecticut’s few and true tourist traps. It just had to be done once. For the site. And for you. 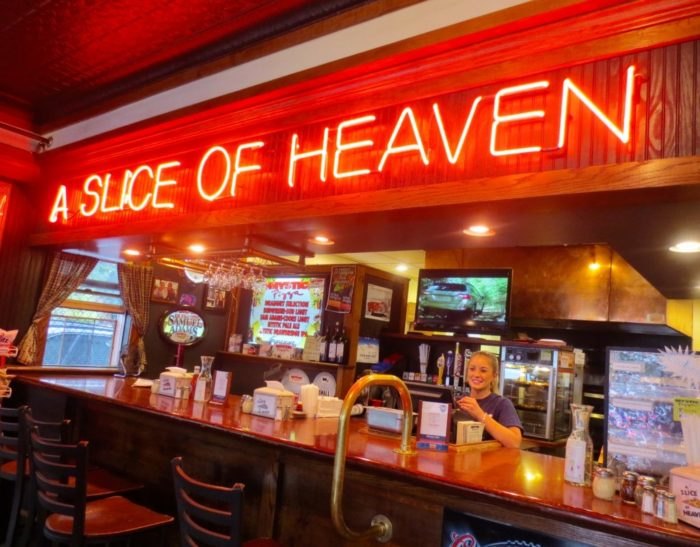 There’s really no reason in the world for anyone to eat at Mystic Pizza. The food we had (a veggie supreme pizza, salads, and some garlic bread sticks) was perfectly fine. Nothing was gross or poorly prepared. But certainly nothing was exciting or worthy of praise either.

Well, that’s not technically true – the corner restaurant’s ability to thrive on one movie decades after its release is actually fairly remarkable. 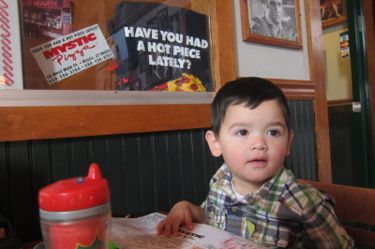 I watched the movie back in the day and thought it pretty good. I thought Julia Roberts was okay, and I don’t know how her career turned out. Now her brother, Eric Roberts, hoo boy, I see big things him. Gonna be a huge star. (Kidding, of course… also, I rewatched the movie in 2020 for this website and here’s my review.) 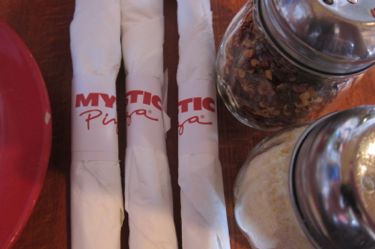 Since this is in downtown Mystic, there is no parking. I can’t imagine what a mess this place is on an August Saturday. (I avoid Mystic on summer weekends for a reason.) Early October was bad enough, but Mystic Pizza has that TARDIS quality about it; it doesn’t really look big, but it’s actually rather large. We had no issue getting a table quickly.

The service was pleasant and attentive and like I said, the food was edible and the atmosphere was fun. Fun in a totally stupid, slightly embarrassing way. This place is covered with Mystic Pizza The Movie stuff. EVERYWHERE. It’s insane how much they have. You cannot avert your eyes from visions of Annabelle Gish and Lily Taylor. 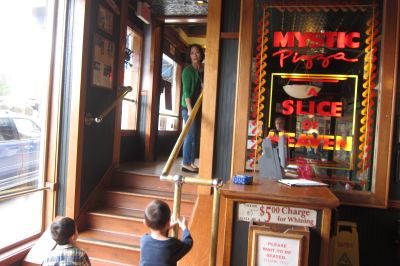 While we ate, a continuous loop of the movie played above a nearby table. Endlessly. Day after day, year after year. I’m sure this happens at other movie restaurants, right? I have no idea. The only other time in my life I made an effort to visit a celluloid location was the Double R Diner from Twin Peaks in Washington. (And several other Twin Peaks locales, but THAT WAS TWIN PEAKS.)

Again, our food was fine and we cleaned our plates. But I am positive there is better pizza in Mystic, probably within a block or two. And the large Vegetarian Delight pie was 20 bucks, which is how much a large of the greatest pizza in the world costs in other parts of Connecticut. 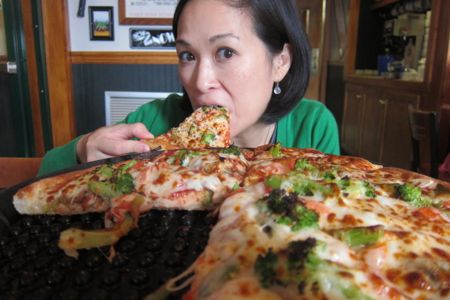 Interestingly, the vast majority of Mystic Pizza Yelpers are not from Connecticut, let alone southeast Connecticut. I’m pretty sure locals never, ever go to Mystic Pizza.

While we were paying our bill, an effusive woman gushed to her waiter, “I love this place. This is the best pizza I’ve ever had in my life!” Hoang and I stared in disbelief but took the high road. She had a decided midwestern accent and if all she’s had is Chicago deep dish travesties or Papa John’s in Iowa, I get it. But at the same time, I wanted to kidnap her and take her to New Haven.

It made me sad. There’s a gift shop there too, at which people were actually buying Mystic Pizza stuff. 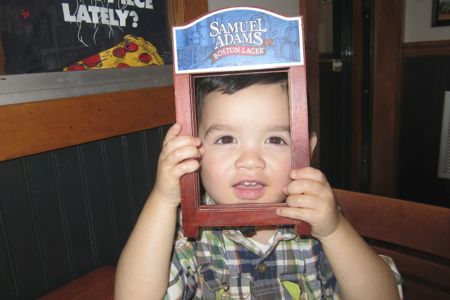 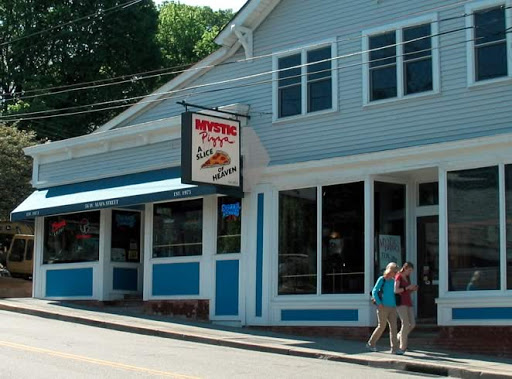