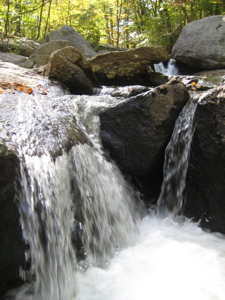 As I near the end of what is a much, MUCH better trail than I had anticipated to find when I began, I’m reminded again what makes hiking the CT 400(825) so unique. This is CONNECTICUT, the fourth highest population density of all fifty states – and moreover, the Mattabesett traverses towns in the center of the state, not the northwest/east corners. And yet, this is a fun, interesting trail with challenging sections, great views, and a beauty all its own.

(That said, my title is a play on the fact that this section crosses four separate power line cuts – and yet, is still a cool hike.) 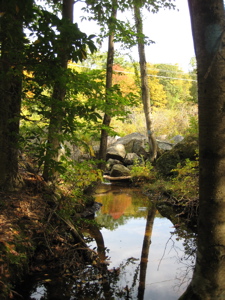 Before I get too maudlin, let’s get to this section hike. After all, I do still have a few miles to go before I can call it complete. Beginning where I last left off (of course) at the Seven Falls Rest area along Route 154 – right at the beginning of another of Connecticut’s Scenic Routes – I was again struck by the strangeness of this little picnic spot.

I mentioned in the last section report that the stop over was the state’s first rest area and was extremely popular when Route 154 was the main road from Hartford/Middletown to the Connecticut shoreline. So that’s kind of cool. There is also a little restaurant just south of the parking lot… not quite as close as Guida’s up in Middlefield, but certainly close enough if you’re ending your hike here. 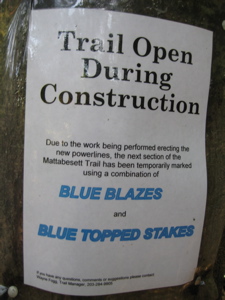 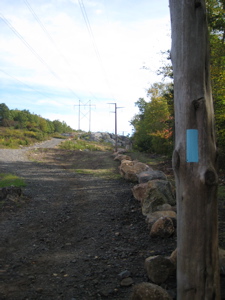 Anyway, Seven Falls is a very pretty area – but it seems to be frequented by sketchy characters. This is my third time here and all three times creepy guys were milling about. This time, two guys looked rather annoyed with my presence as I bumbled right near them. They scurried away to complete their drug transaction or whatever they were doing. Note: One of them drove a 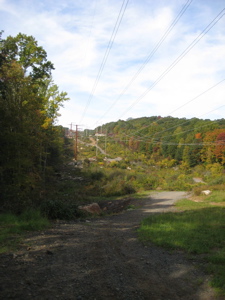 nice Acura SUV which was parked up on 154 when I began. When I looped back here a couple hours later, the same guy with the same car was still there, having a totally fake conversation with a strung out guy as I walked right past them again. Oh well, they didn’t bother me so it’s okay.

Yes, today would be a loop hike for me; coming back along the Bear Hill Loop and Seven Falls Loop Trails (Those hikes here). But more on them in a separate post. After leaving the small falls area at the rest stop, I paralleled the brook and the “new” set of power lines for a while. You’ll notice my first several pictures here contain power lines. While they are indeed ugly, they do power my iMac G5 and they give ATV riders a place to practice their hobby off of my blue trails.

But here’s the thing – this two-thirds of a mile or so along this swath is actually pretty cool. And downright pretty at times. Maybe it was the peak foliage, I don’t know, but I enjoyed myself. 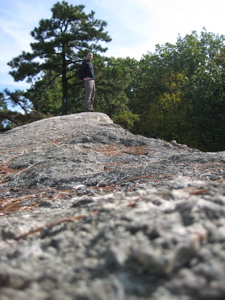 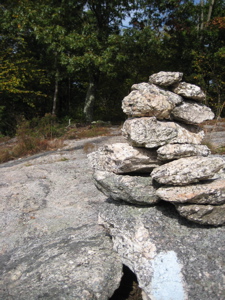 There’s even a couple rock scrambles here to boot. It’s almost enough to forget the hum of the high voltage above your head. And, to top it off, the blue blazes are painted on wooden posts stuck in the ground solely to guide us hikers on our way. I liked that. 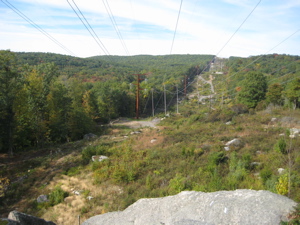 After the power lines, I passed more power lines – these were older and not as exciting. Then the trail zig-zags it’s way north into Middletown, the final town of the trail. The first zig is quite a zag. Up, around, and down a bunch of boulders and cliffs – hey, this was fun stuff. 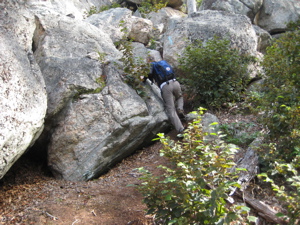 I passed what is the first of several Bear Hill Loop crossings before heading off east on another major zig. I was not clear on why the trail followed this route, as the contours did not look to necessitate it. But I followed the trail to it’s tippy tip at the end of the zig – and found a nice little falls there. It’s tiny, but the perfectly squared off edges of the “steps” are worth blazing the trail out here – before zagging back west, then north. 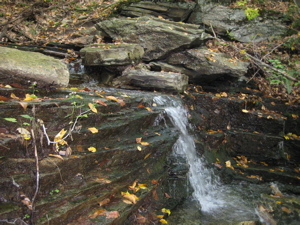 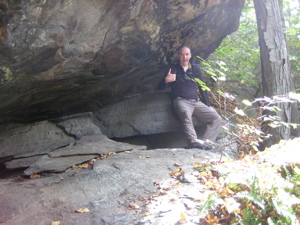 Across a little stream and then boom – zig back east along the bottom of the so-called Chinese Wall. A massive cliff in the woods, this “wall” is rather imposing. Of course, for every zig here there is a zag – and this one was up to the top of the wall and then back west along the top of it. The Walk Book mentions a view here, but there is none. Keep walking, if views are your thing. 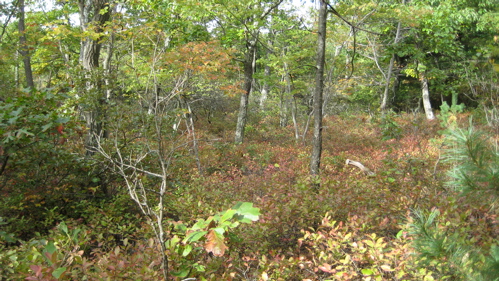 Shortly after that disappointing vista, I was very pleasantly surprised by a great view north. This one isn’t even mentioned in the book, but it’s the best view of the day! I even stopped and had a drink and a banana here, a rarity for me. I knew I’d be back in this very spot on my return trip via the Bear Loop, so I continued onward along the ridgeline up to Bear Hill.

Just before the summit, the book promised another view (this time south) and it was merely okay. The geology of the massive exposed rock face beneath my feet was actually cooler. I noticed the very long, very interesting intrusion of milky white crystals splitting the more boring gray rock. You’d think I’d be a bit more academic in my description… but oh well. If you want to clarify, be my guest in the comments. 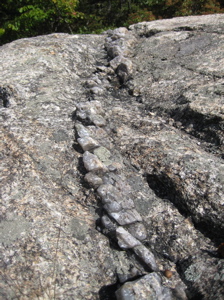 I also found evidence of early man here in the woods in Middletown, Connecticut. We’ll call him… Middletown Man and say, with no scientific basis whatsoever, Middletown Man tamed and rode dinosaurs. 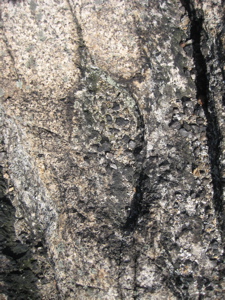 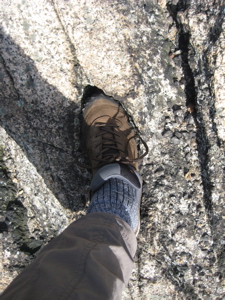 On top of Bear Hill, there is not one, but two benchmarks. I look for these things at the summits of all the hills I climb on my hikes, but rarely find them. To find two is just crazy… But they are slightly different. I don’t know enough about these things to understand why… 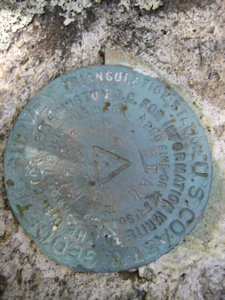 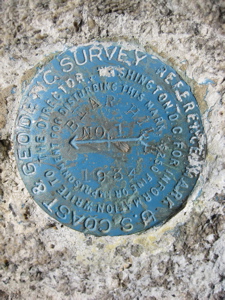 The one on the left says it’s a “Triangulation Station” and has a triangle in the middle. The one on the right (from 1934; I can’t read a date on the other one) states that it is a “Reference mark” and points north. 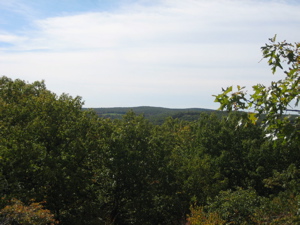 Neither of them mention being at the summit of Bear Hill, however. Oh, wow… okay; I just spent 20 minutes learning all about the many different kinds of benchmarks. I had no idea. You learn something new every day.

From the top of Bear Hill (at 660′, it’s 1656′ shy of Bear Mountain out in Salisbury), the Mattabesett heads northerly again, but the vegetation varies wildly over the course of the next mile. Crazily so… 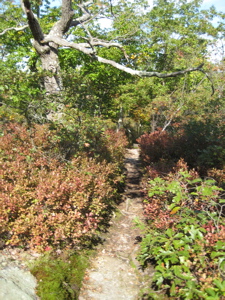 Chestnut oak and blueberry for the first quarter mile… 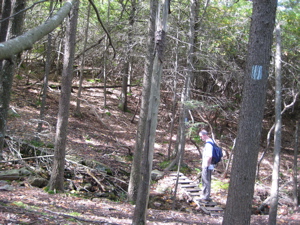 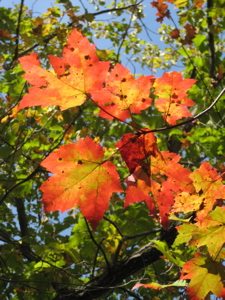 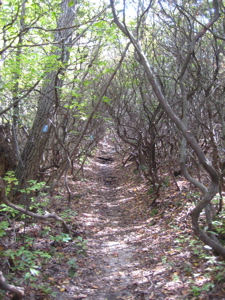 Then up through a nice maple stand… And then a long stretch through an arbor of mountain laurel.

This last bit through the laurel is really neat. The stand is very old, and very thick. When walking through it, one almost has the sense that the trees are closing ranks behind, and if you don’t hurry up, you’ll get swallowed up. But then, just before you do… 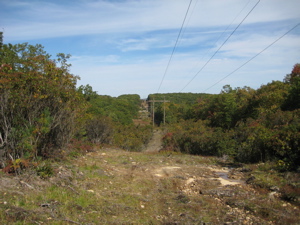 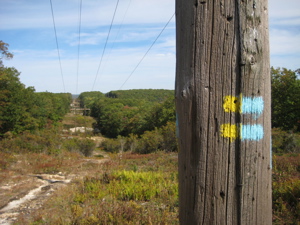 This last power line is also where the Bear Hill Loop starts back south (hence the blue/yellow blazes) – but I had a little ways to go to the end of my section. I crossed Bear Hill Road and then completed the unremarkable last little bit down to Brooks Road. As I was figuring out a way to prop my camera up for my finishing shot (that would be Asylum Reservoir # 2 in the background, by the way), a curious groundhog mosied right on by me, like I didn’t exist.

So where’s the picture? Well, I had the 10-second timer set so by the time it snapped, the groundhog was off in the long grass, laughing at me. 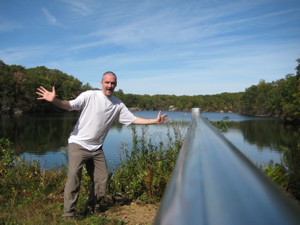 For some reason, I loved this section. I had perfect weather during my favorite time of year, sure, but I think it was just a cool little unexpected bit of Connecticut I’ve never known before. Only about 4 miles to go and then I’ll be complete my first 50+ mile Connecticut hike (Appalachian Trail section excluded). This also is a trail that gets me a patch from the CFPA!

Pshaw! Patch?! I’m totally getting a Mattabesett Tattoo. A Matattoobesett. Or something. 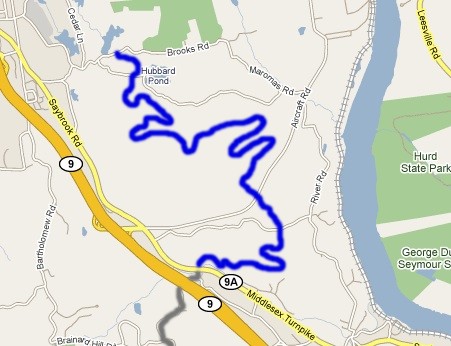 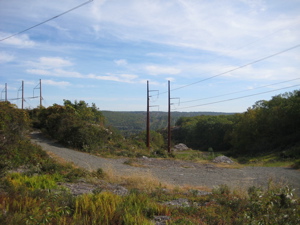