As all readers know by now, to complete the CFPA’s Blue Trails Challenge, I am compelled (forced?) to hike all the trails described in their Walk Books. This becomes iffy at a few of the “trail network” places I’ll get to someday, but so far I’ve stuck to the plan. In this case, completing these three loop trails was a no-brainer. Not only would they be hiked and documented here, it actually made sense to do so as a solo hiker. 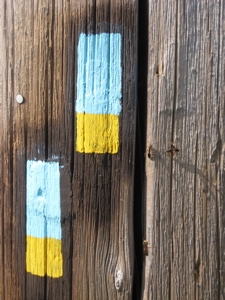 And so I did, allowing for two loop hikes to complete my Mattabesett hike. If you plan on not reading further than this paragraph, I’ll be honest with you upfront: None of these trails is worth hiking in its own right. All three pale in comparison to the parallel Mattabesett and none really offer anything too spectacular. But, as I’ve said, they do offer the ability for loop hikes – And the ability to call oneself a Blue Trails Challenge completist – and for that, they are wonderful. 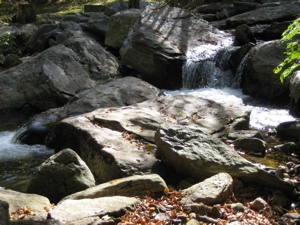 One of the Falls at the Seven Falls Rest Stop

The “loop” here refers to the fact that it forms a loop hike with the Mattabesett Trail, not with itself. In fact, all three of these trails are liars that way. After hiking north on the surprisingly pretty Mattabesett (My Section hike report here) and backtracking from the parking area along Bear Hill Road a pace, I began hiking south on the the Bear Hill Loop Trail. 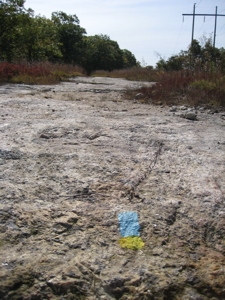 Immediately this trail disappoints a bit. It follows a power line cut but was not blazed well at all. Of course, there’s nothing really to blaze on along power line cuts, so I can’t fault the maintainers for that. And they did try their best, as I did find a couple of the distinctive blue/yellow blazes painted on the ground.

But more than that, there were two abandoned cars to start the trek just as the trail entered the woods along a rutted woods road. 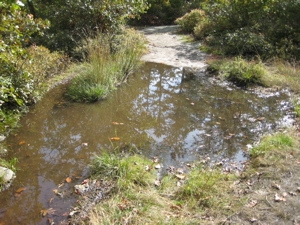 The trail soon crossed the Mattabesett, the first of four intersections with the Mother Trail. The trail was ponded in places and often bore signs of ATV use and misuse. Finally, after a short shared section with the Mattabesett, Bear Hill Loop came into its own.

Branching north off of Bear Hill proper, the trail takes in some beautiful views north towards the Connecticut River and the hills beyond. A short descent and curve back south, the the trail passes a little pond and some clear-cut forest. Another Mattabesett crossing and then the trail goes due south mainly along an old road to its terminus with the Mattabesett near Aircraft Road. 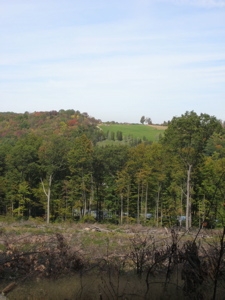 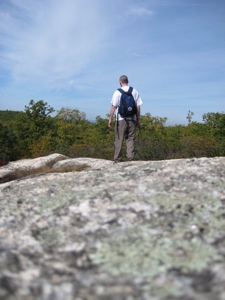 Altogether, not a very exciting trail and its somewhat surprising how boring it really is in such close proximity to the really cool stuff along the Mattabesett, no more than a quarter mile away at any point! It really goes to show how important trail creators really are; finding the “good stuff” along the way out there, in the middle of the woods. 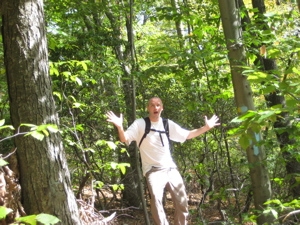 Surely you are thinking, “Seven Falls… Hm, must be nice. With seven waterfalls and all.” I suppose it really depends on your definition of what a waterfall is. If it’s “an time any moving body of water descends an inch vertically,” then you’re in for a treat. If you demand actual waterfalls, go elsewhere. 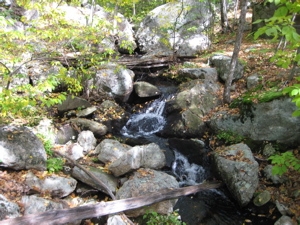 Of course the trail is named for the park at the end along Route 154 in Haddam – which doesn’t have seven waterfalls either. But I still expected some sort of splish-splashing action. Oh well.

This loop trail began for me along the Mattabesett south of Freeman Road, after having just come down the mail trail a little ways after completing the Bear Hill Loop. It zig-zags quite impressively but for no real discernible reason. It does traverse a cliff area of sorts, but nothing really too fantastic. 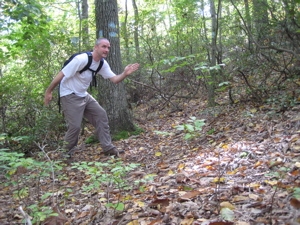 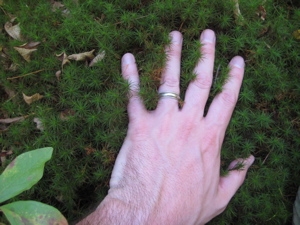 About halfway in, the trail finally reaches a stream which does go downhill and travels over a few small rock ledges. I do think the picture below is pretty cool, with the yellow leaves on the blackened rock, so I’ll give it that. 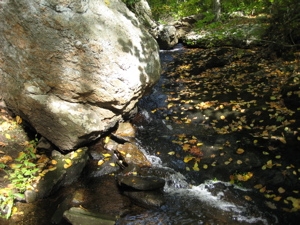 It is a pretty little trail and for picnickers at the park, coupled with the Mattabesett, it offers a nice nearly three mile hike. Of course, there are no signs at the park and no one would ever think to make that little loop. Perhaps a nice Eagle Scout project for some kid? Hint hint.

Cross a couple power line swaths, dipsy-do a bit more down to the rest stop park area and you are done my friends. 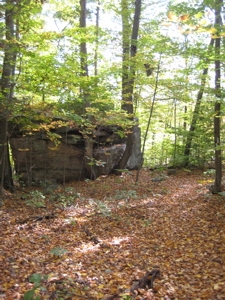 A month later I was out in the Middletown woods again, completing the last of the Mattabesett’s 52 miles. I hiked in about three miles from Bear Hill Road to (another) power line cut in the middle of the woods before turning around to head back to my car. In doing so, I’d return via the Reservoir Loop Trail. 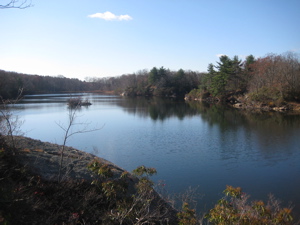 I walked down Reservoir Road a little bit to pick up the loop trail which follows the road a little ways before entering the woods above Asylum Reservoir # 1. There is supposedly a view here, but there’s not. Not at all. 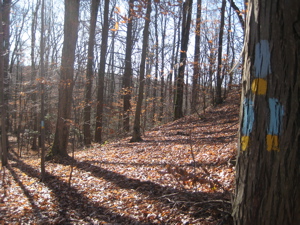 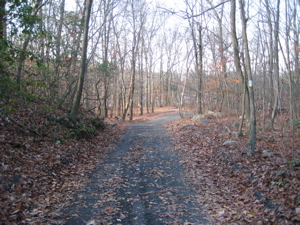 Walk down the road! 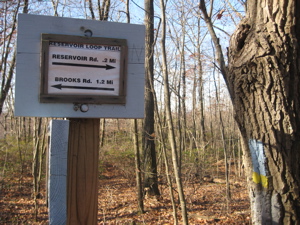 Wander through some swamps and junk for a little while, and emerge on the shore of Asylum Reservoir #2. The Mattabesett certainly took the good sides of the reservoirs – the ones with all the pretty views and dry trails.

There’s really not much to see along this trail – and what there is to see – the reservoirs – you’ll want to see from the other side along the main trail.

But if you only do that, you can’t call yourself a true Blue Trails completist. And then where would you be? 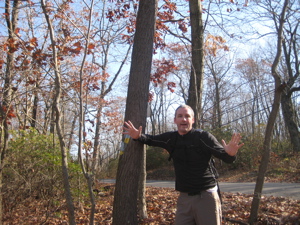