The history and longevity of Sleeping Giant is much more than the trails, but let’s start with the trails. Because I love the trails – which are also National Recreation Trails, whatever that means.

Having hiked every trail, I AM A GIANT MASTER!

I’m pretty sure Sleeping Giant is probably the most recognized natural landform in Connecticut. All those who drive up I-91 from New Haven can clearly see the ol’ prone Giant and he’s visible from maybe 10 towns both north and south. He’s visible from several other ridgeline lookouts all up and down the Metacomet Ridge.

I’d poked around the state park a few times over the years, especially when I lived in Cheshire for a year. I’d snapped a few pictures here and there from various trails but always sort of poo-poo’d the whole hiking aspect of the place. (Note: this was before the days of CTMQ.) But once I realized the trails were included in the CFPA CT400/Blue Trails Challenge, I decided to poke around me.

So one day after I promised to hit IKEA on the afternoon of a half-day at work, I parlayed that into a Sleeping Giant hike. 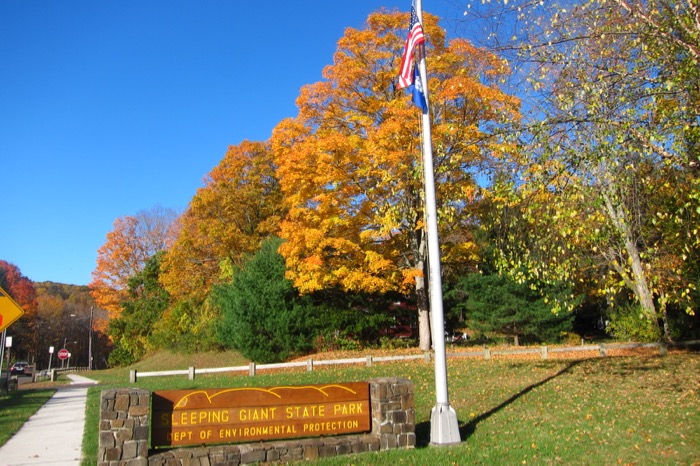 Afterwards, I learned that I can become a Giant Master! And who wouldn’t want to become a Giant Master?! First I had to become a Sleeping Giant Park Association member for 10 bucks a year… Check. Then I would just have to do what I was going to do anyway, which is to hike all the trails within the park. Here’s more about the program and a picture of the handsome award I will achieve when complete.

Quickly, a little bit about the Giant, from the Association website:

The trap rock ridges in Connecticut began life about 170 million years ago when volcanic eruptions formed the columnar patterns of basaltic rock. This hard rock which fractures at near 90 degree angles gives the rock the name “trap” meaning step or stair in Swedish. In Connecticut most of these ridges run north-south, but one unique ridge six miles north of New Haven runs east-west and has the distinctive profile of a recumbent human, especially when viewed from the south. This Sleeping Giant has held a mythical quality for all who see it.

Y’know, I never thought about its unique E-W direction. But it’s true. 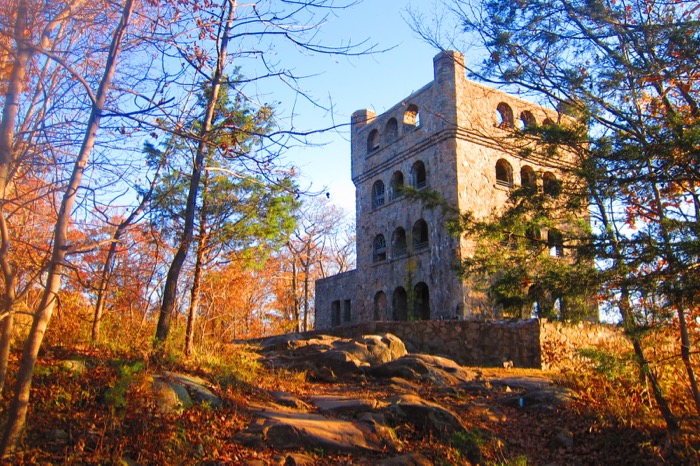 The Native Americans in the area called the Giant Hobbomock, an evil spirit who became angry at the neglect of his people and stamped his foot near the current location of Middletown causing the Connecticut River to change course. Keitan, a good spirit cast a spell on Hobomock causing him to sleep forever so that he would do no further damage.

Although the ridges to the north of New Haven were easily visible from the harbor and Long Island Sound, it was almost a century after the founding of New Haven Colony before Europeans began to settle the area which would be named Mount Carmel. In 1735 Joel Munson began work on a dam on the Mill river just southwest of the Giant’s head. He built a grist mill and saw mill on the site. The presence of the mill spurred settlement of the area as did a north-south road constructed through a difficult area known as the Steps, just west of the Mill River. In 1828 a canal from New Haven to Northampton, Massachusetts brought barge traffic to the area. In 1846, the canal company ceased operations, and a rail line was laid along the bed of the canal. The Mount Carmel Axleworks moved to the location of Joel Munson’s dam. 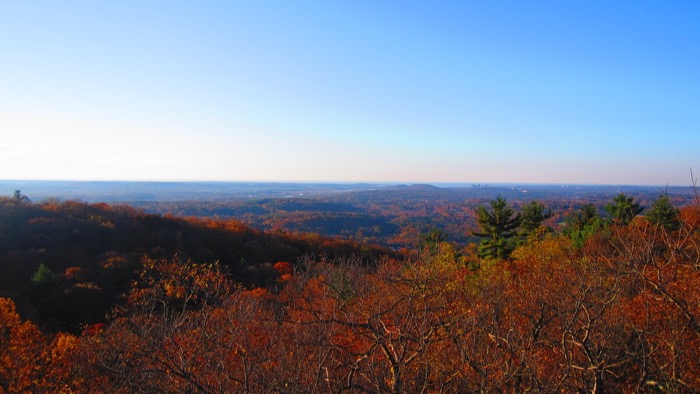 The second half of the nineteenth century saw cottages built on many of the Giant’s ridges. The summer homes were used by many local notables for either overnight stays or summer-long residency. Many ingenious devices were used to provide comforts at these remote locations. The highlight of this era was John H. Dickerman’s opening of Blue Hills Park on July 4, 1888 when local residents were invited to travel a carriage road that had been constructed to a pavilion on the fourth ridge for a “basket picnic” which included ice cream.

Judge Willis Cook who owned the first ridge (the Giant’s head) had an ox road built to the top of the head so he could transport building materials for a cottage. Parts of this road are now the blue trail on the north side of the head. By 1911 however vandals had become such a problem that Judge Cook decided to accept an offer from the Mount Carmel Traprock Company to lease the land for quarrying. The lease was for 20 years with a renewal option for another twenty years. Perhaps to ease the objections of his neighbors, Judge Cook included a clause in the lease that no quarrying should be visible from Mount Carmel Avenue. The objections of local residents to the continuous blasting and ultimately to the changing of the Giant’s shape led to the formation of the Sleeping Giant Park Association and the beginning of Sleeping Giant State Park. 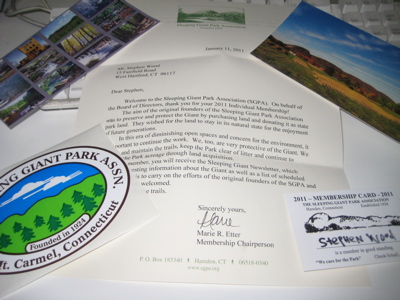 I am now a proud member of the SGPA. I’ve got a card and everything.

As you’ll see if you read further into my hike reports, the remains of the quarry are starkly apparent and thankfully, the Giant’s head remains mostly intact after the lobotomy.

Here is more about the SGPA, to which the park’s existence is owed. Sleeping Giant is a crown jewel of the Connecticut state park system. It’s very new New Haven and is incredibly popular with everyone from miles around. If you go on a nice day and stick to the Tower Trail (assuming you were able to park), you will be joined by hundreds of others.

Oh, and by the way – where can one get the best view of the Giant? Get over to Lockwood Farm in Hamden, climb up the hill along the road then peel right through the fields and look north (right.) Trust me. That’s where all the clearest shots of the big guy are from. 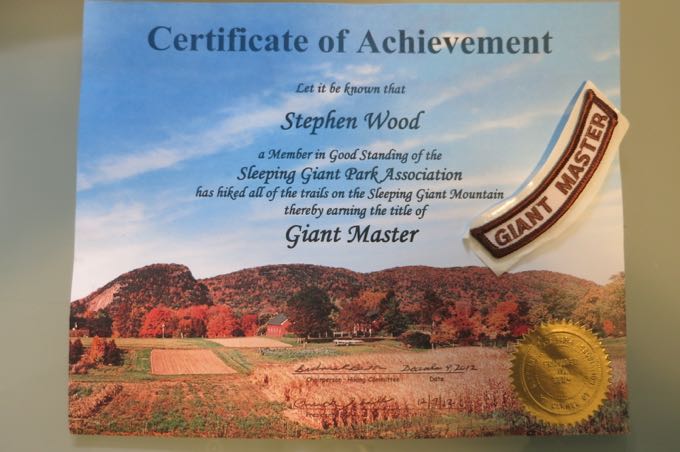