The Butler Did it – Or Maybe it was the McCook…
Hartford (Google Maps Location)
December 7, 2006

Note: The Scott mentioned below has become a friend. He was only doing his job.

The Butler Did It. Or maybe the McCook. Or… Or perhaps uninsured 21-year-old Kia Sportage driver Wilfredo Sanchez. Yup, it was definitely Willy Sanchez. You see, he failed to notice the large yellow Victorian house in front of him back in August 2002 and proceeded to drive his car into the living room of the oldest surviving house on Hartford’s Main Street. 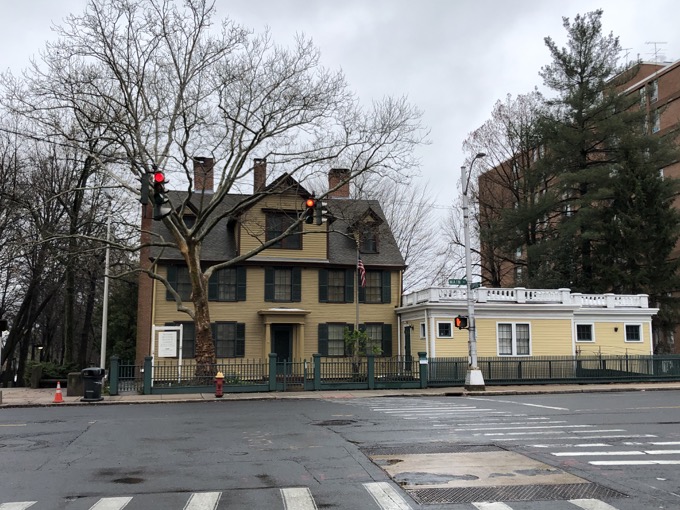 Needless to say, through hard work and many donations, the historic house museum is back to being whole again. In fact, one would never know what happened to it in 2002.

Now that I’ve dispensed with what is, to me, the most interesting aspect of this particular museum, I suppose I have to talk about my visit. Intrepid sidekick EdHill had agreed to meet me at the Butler-McCook House around 6 after work. Ed had prepared for the visit by making time to down a beer across the street at Peppercorn’s restaurant beforehand. 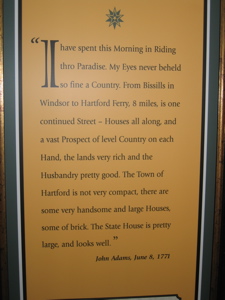 The Butler-McCook House and Garden Main Street History Center (the official name just rolls off the tongue) is an oasis of sorts. Just south of downtown and a few blocks past the Wadsworth Atheneum on Main street. Now if you’re familiar with Hartford you are saying, “Wait… There’s an over 200-year-old house there? Right near where I scored crack a few weeks ago?” Um, yes that’s right – but who are you and what is a crackhead doing reading this nerdy website? (Note the beautiful irony of the John Adams quote above.) 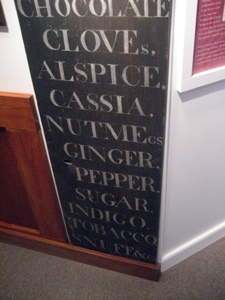 The night Ed and I decided to go was an “Aetna First Thursday” event, which happens every month in Hartford. That meant that not only was the museum free, but there would be a delicious crudites and coffee spread as well. To top that off, I found free street parking (but Ed paid six bucks for some reason). Owing to the season, the house was decked out in Christmas finery and owing to the special event night, a group of women carolers serenaded us throughout the night. The scene was set for a perfectly lovely museum outing. 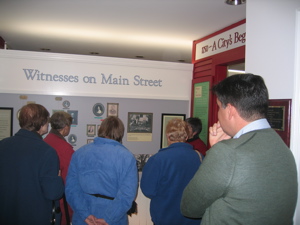 There are two distinct sections of the Butler-McCook House; the house itself; replete with all the family possessions from throughout the generations and the “Main Street History Center” part which was a small museum about the history of the local area. Visitors are shuffled to the history center first. Once an addition to the original house, this section walks visitors through the 300 or so years of Hartford history, particularly the Main Street-leading-to-the South End area. The problem with the 10 or so exhibits is that there are simply too many words. Now, any CTMQ reader is laughing at my hypocrisy right now and I accept that. There were several historic maps and photos of the area and more than enough anecdotes from days gone by. 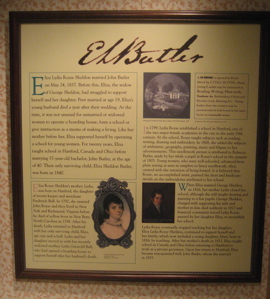 And I like all that stuff – really, I do. It’s all the genealogy and family histories and stuff like that I don’t care about. Even the backgrounds on the house’s namesakes, Sarah Ledyard Butler and her son James McCook who took the house over were pretty boring. Sorry.

It is amazing that the house has survived in it’s original state and spot after 200 years of commercial and other residential development. And it’s cool to scan the exhibits which chronicle the changes of the environs from 1732 to present. Now that I think and write about the place, I’ve come to realize that I liked the History Center. 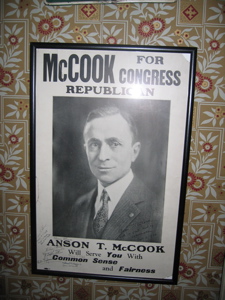 There was one other (temporary) exhibit, “Unbuilt Hartford,” which consisted of nothing more than fanciful artist renderings of absurdly ostentatious buildings that never got built in Hartford. I think I was supposed to marvel at the overblown zeal of the architects and wonder what “could have been” in our fair capital city. Blech… These monstrosities were just way too over-the-top for my taste; no need for massive ornate castles in central Connecticut. Ed, on the other hand, enjoyed the exhibit and the cheese that happened to be nearby. I found the exhibit silly (though I enjoyed the cheese as well); I can guarantee that most of those things were never meant to be built at all – they were merely goofy dreams of goofy 19th century architects. Ed, have you a rebuttal?

You obviously were too focused on the delightful cheese plate nearby to get a good look. One of the main pictures was the original design of Trinity College, which looked like Hogwarts. The only reason it wasn’t completed was the silly Muggles in charge didn’t have enough money. That was the story with most of them. it was all just a lack of funds. Granted the losing design for the Civil War Arch was a little ostentatious and deserved to lose. However a lot of the other ones were really nice ornate Victorian homes. The fact that they were accompanied by a delightfully piquant Monterey Jack just made it that much more fascinating. 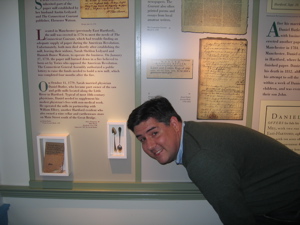 And I quote: “Take a picture of me with these spoons. I like spoons.” Seriously.

Other that that the museum was pretty interesting. The “Main Street History” addition to the museum was so overflowing with stuff to read you need a good few hours to really take it all in. It was also fun to run into my cousin Nancy with her kids. The awkward pause after she asked me what I was doing there gave me enough time to come up with a better excuse other than “Me and my friend are going to every museum in the state and writing about it!”. I believe I told her of my fondness for Christmas carols and free cheese. 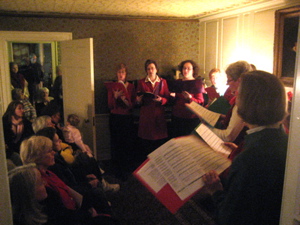 “Another Octave” sang carols throughout our visit.

Sadly, EdHill passed away in May of 2016. Our original plan to do CTMQ together never happened for practical reasons, and man, do I miss him.

Once done with the History Center, we crossed the threshold in the restored house. The chorale group and their fans occupied the main living room, so I never got a real good look at that room. This was also the room that was a temporary garage for Mr. Sanchez’s car a few years ago too. Across the foyer and into the other living room, we found a quaint Christmas scene of about 100 years ago. We also found a lovely guide there who told us we could not take pictures in the house. 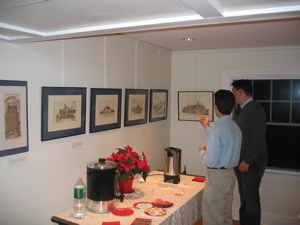 Hm. Really? You see, I had already been through the house earlier looking for Ed – and had snapped all the shots you see here. But this lady was tough and we never got a shot of the little Christmas tree with the original ornaments from back in the day. 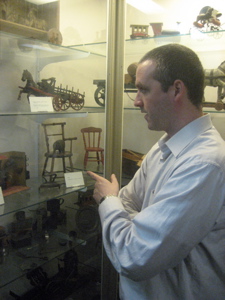 In fact, everything in the house was original to the McCooks and/or Butlers. The problem is that the vast majority of it is, well, it’s kind of boring. Beds, dressers, highboys, candle holders, chairs. Upstairs, the house looked like my grandparent’s house from maybe fifty years ago. There was Mama and Papa’s room and the bed where all the kids were born. There was Auntie the housekeeper’s room with her… um… her bed and stuff. Ooooh, the kids’ room with a… er… a dresser. And lo! The attic goods from Reverend McCook’s college days at Trinity as well as his military paraphernalia. I suppose I should get used to this sort of thing though, as I expect to see my fair share of highboys and bedroom furniture from the 19th century. 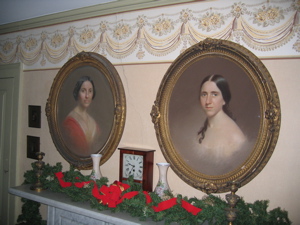 It was actually pretty interesting, to be honest. There were audio recordings of Ms. Frances McCook who lived in the house until 1971. Once I got over the fact that she sounded like a whiny man, her stories were fairly interesting – about the Blizzard of 1888 and about the hired Irish help, for example. She also pronounced “mama” and “papa” with the stress on the second syllables in each word, which we plan on teaching our son to do. Oh, and there was a McCook kid named Shed along the way at some point, which stuck in my brain. 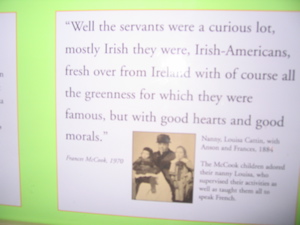 I listened to a guide tell some other visitors about Frances and found her to be a rather amazing woman. Here she was, alone and old in this large historic house on Main Street in urban Hartford, and apparently going outside and checking up on her less fortunate neighbors. Frances even taught herself Spanish in her 80’s so she could speak with the large Hispanic immigrant population in South Hartford. 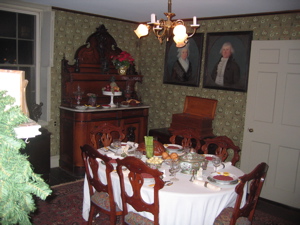 In my excitement to get across the hall to the antique toy display, I conked my head on the low hall light which broke the filament in the bulb. 3 musty bedrooms, a toy display, and an attic display finished out the upstairs, so we returned back down to the ground floor. There are some cool Asian paintings and authentic swords in the main hallway on the way back to the two most interesting rooms in the house. 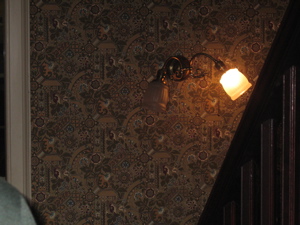 One was the dining room, set up to replicate an old school Christmas dinner. But again, it really didn’t look much different from my grandparent’s holiday dining room. Though the details were quite impressive, right down to the tiny salt dispensers and plum pudding. We were told the traditional soup contained calf head, lemon, and egg. Admittedly, that was absent from my family dinners. The room also contains a working Edison original music box and an old Cheney clock. 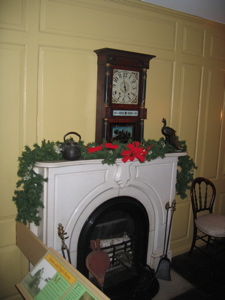 Crossing the hall, we entered Reverend James McCook’s library. In it were some old Egyptian artifacts as well as some really cool Japanese armor from over 100 years ago. Here, a guide explained to us that Reverend McCook (Frances’s father) was an Episcopalian minister, a language professor at Trinity, and a so-called “Sociological Investigator.” He was one of the first Americans who truly tried to understand and solve the nation’s homeless problem – of the late 19th century. By all accounts he failed miserably (as one can see peering out his study window on any given night) but the man was well-intended. 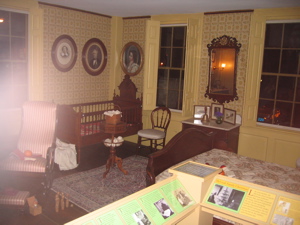 We slowly made our way back to the foyer, soaking in the garish wallpaper for the last time. Once there, Ed bought a mug and I smoothly asked Scott for permission to take a picture of the Christmas tree room. He mulled it over for a few seconds and let us down easy. You see, the curator would need to give me permission to do so, as they only allow media to snap shots of the authentic pieces. Well there you go! If this isn’t media I don’t know what is! 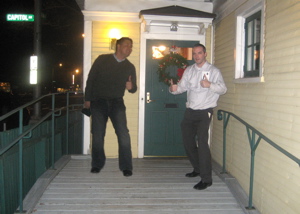 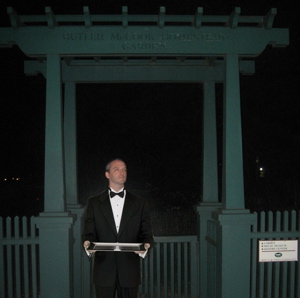 I had this great idea to go dressed as a butler and Ed would come as a cook. Short of that, we’d take pictures of each other in the garden and make it look funny. We never found a good ‘shoppable’ cook picture though.