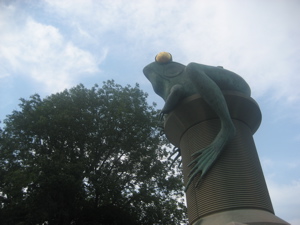 Of course you don’t. And besides, this “Frog Bridge” has become famous in its own right… it is featured prominently in the book, “Weird New England.” Furthermore, it has spawned several websites – which do not lack for wives tales, quirky explanations, and fruitless searches for truth. 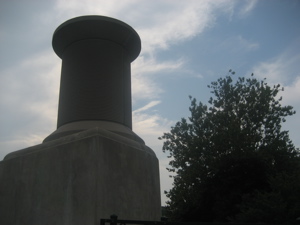 Willimantic is known as the Thread City. (Connecticut is fond of historic manufacturing nicknames… Bell Town, Brass City, Silver City, Hardware City – these are all real, by the way.) The town was once a very important textile town but since has fallen on some very, very hard times. In fact, Willi has more heroin addicts than any other city per capita. I just made that up, but I guarantee it is not far off the mark. It’s quite sad, actually, because there is a University here (Eastern CT State University) and UConn is only a 12 minute drive away.

In the late 1990’s, the town earmarked some money to build a new bridge here; one that would spark town pride and speak to its rich history. It is 476 feet long and cost $13 million (each frog cost $50K). The brass frogs are 11 feet tall on top of the huge spools. n 2002, the Federal Highway Administration awarded the Frog Bridge an Honorable Mention for Excellence in Highway Design, in the category of Historic Preservation. Leo Jensen of Ivoryton, Connecticut is the sculptor of the frogs. 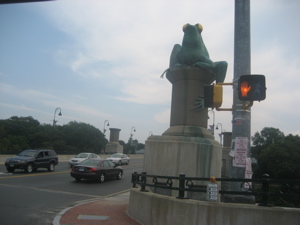 Blah, blah, blah… what about the dang frogs?! This harks back to the legend of the Frog Fight, a harrowing night in 1754 when townspeople rushed outside with their muskets to defend themselves from an unseen screeching menace. The next morning, they discovered scores of dead frogs, who had fought for the last remaining puddles of water in a drought-stricken lake.

Not good enough? Ok, I’ll get a bit more in depth: During the French and Indian War in 1754 Windham’s Colonel Eliphalet Dyer raised a local regiment to fight in the French and Indian War. Those left behind felt vulnerable to attack. The Windhamites worst fears seemed realized during a steamy-hot June night when unearthly screams emanated from the darkness: Valiant villagers grabbed muskets and fired blindly into the night.’ Some believed that the Day of Judgment had arrived, and gave prayer. Others hid under their beds. 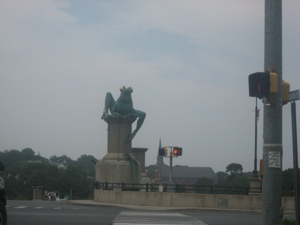 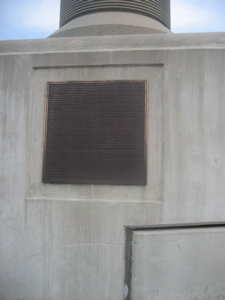 Good bridge design, cool frogs… who thought this font for the story of the bridge was a good idea?

Here’s a taste of the real Willimantic. An excerpt from an amazing 5-part article from the Hartford Courant (the nation’s oldest continuously published newspaper, by the way.) There are some disturbing pictures if you go to read the full story.

This is a heroin town. Small, rural, open, friendly — and hooked.

Willimantic’s Main Street has all the trappings of a modern-day Mayberry: planters of petunias outside the barbershop, retirees walking their dogs, kids on skateboards, stately Victorian homes high on a nearby hill. 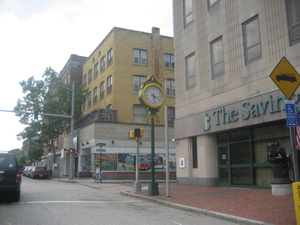 A new $14 million bridge spans the Willimantic River across from Jillson Square, decorated by four huge bronze frog sculptures in honor of a local folk tale. Nearby, the town and state are spending $32 million to make an industrial park out of the long-vacant granite textile mills.

But heroin flows through this place as constantly as water under the frog bridge. Everywhere in the community of 15,823 in the middle of eastern Connecticut are signs of a decades-long reputation that has festered in a political atmosphere of ambivalence and denial, where officialdom often seems resigned to even the most flagrant dealing and use.

Heroin is in every Connecticut town, police say, its abuse accelerated by stronger forms that can be snorted rather than injected. What makes Willimantic an anomaly is the high visibility and volume of the trade in a 4-square-mile area of ostensibly small-town charm.

Phew. We’d reached the end of our Man-Cov-Storrs-Willi MegaQuest and needed a beer. So we headed over to one of the few “real” brewpubs in the state and reveled in our day’s success. (Mini-report here.) 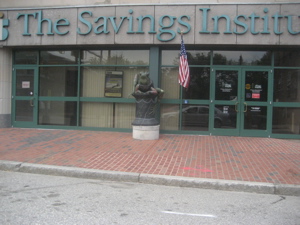 There are frogs everywhere around town. It’s a bit out of hand, quite frankly.