Quick! Who remembers March 4, 2017 in northern Connecticut? It was that Saturday? In early March? With all the wind? 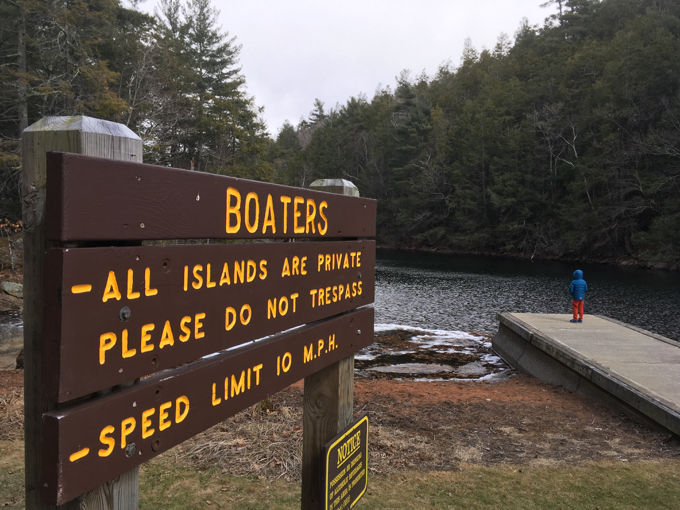 Yeah, it was that freezing cold day with temperatures in the low-teens but a howling and unrelenting wind that made it much worse. Great day for a short hike along the shores of Mashapaug Pond in Bigelow Hollow State Park in Union. Can’t imagine what better way to spend the day. 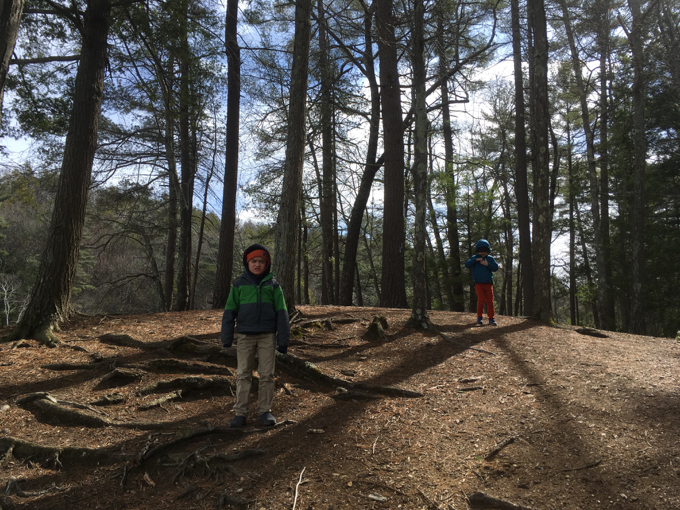 As I wrote in the last TSTL post, “Since this year’s 14 TSTL Challenge points are almost all very short/easy walks (with much longer excursions encouraged, of course), perhaps I’m subconsciously making them more challenging by doing them in difficult weather.” 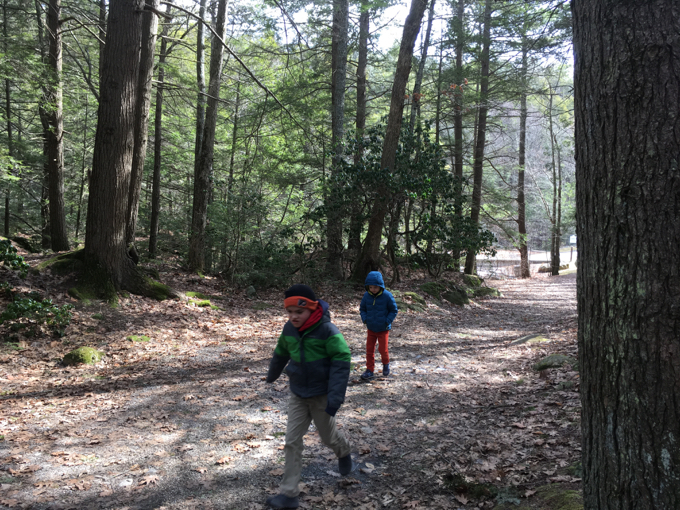 It’s no longer subconscious. It is now a very conscious decision. In fact, I plan to rip through a bunch during the winter and then go on TSTL hiatus until mid-summer. Hopefully we’ll get some challenges in triple-digit temperatures and maybe a monsoon. That’s my goal anyway.

(My wife never reads this stuff, so my diabolical plan is just between us.) 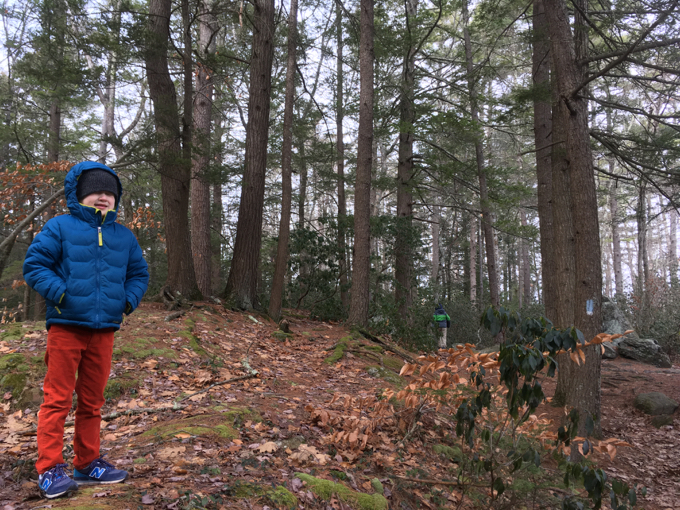 Parking wasn’t an issue, as we were surprisingly the only family out for a lovely hike. What is wrong with people?

It was cold. Like, blindingly cold. But this isn’t called a “challenge” for no reason. Bigelow Hollow is a beautiful state park and despite its network of roads and barbeque pits, it feels very remote and… Northern. Like, northern New England, not just northern Connecticut. 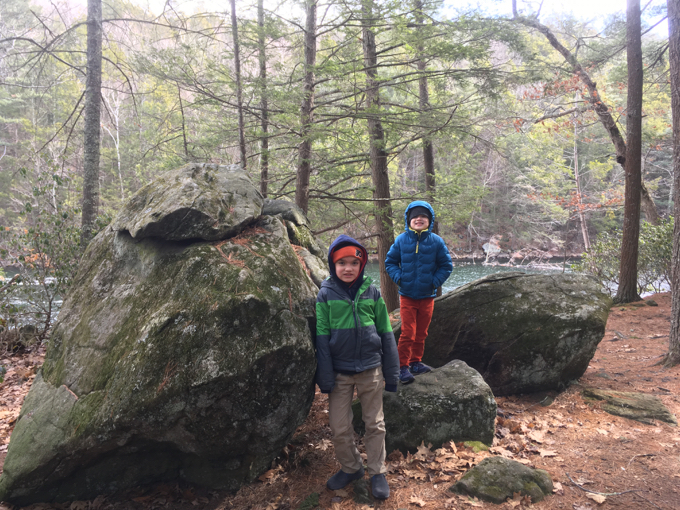 The DEEP seemed to struggle with the “historical” aspect of this place for the challenge though:

Bigelow Hollow State Park, along with Nipmuck State Forest and Yale Forest, covers 9,600 acres in northern CT. A triumvirate of ponds, Bigelow, Mashapaug and Breakneck, with fishing, swimming, and boating are big draws for park visitors. In 1961, Frank Domurat caught a record largemouth bass, 12 pounds, 14 ounces in Mashapaug and as of today the record still has not been broken. 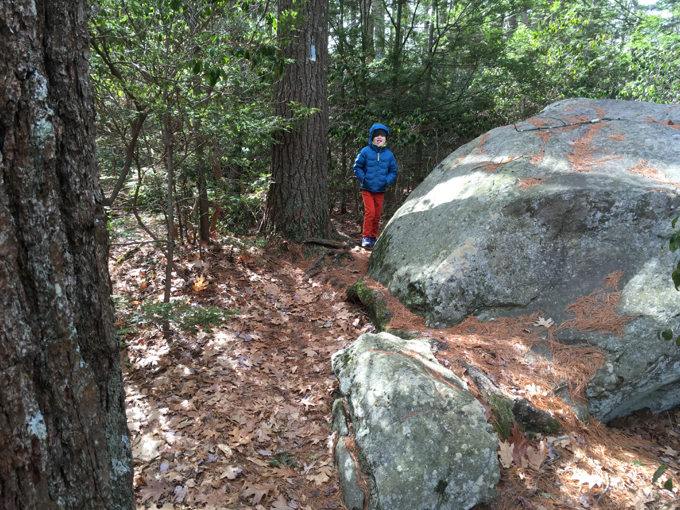 We parked and walked. Calvin didn’t really seem too phased by the arctic winds, but Damian just wanted to get this over with.

The walk wasn’t too long, and Calvin kept finding rock jumbles to climb on while Damian yelled at him to “come on!” I like this Calvin kid. For a five-year-old, he’s pretty darn tough. (Being Damian’s brother certainly helps out with that.) 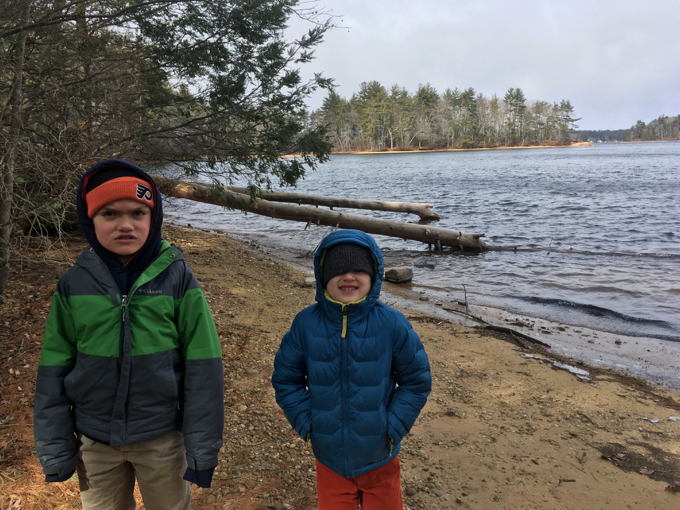 In short order, we came to the little beach area for the required photo. By this point, even Calvin was feeling the chilly bite and only threw one or two sticks into the drink. Neither child needed much prodding to get moving back to the car… for once.

Man, that wind was rough. 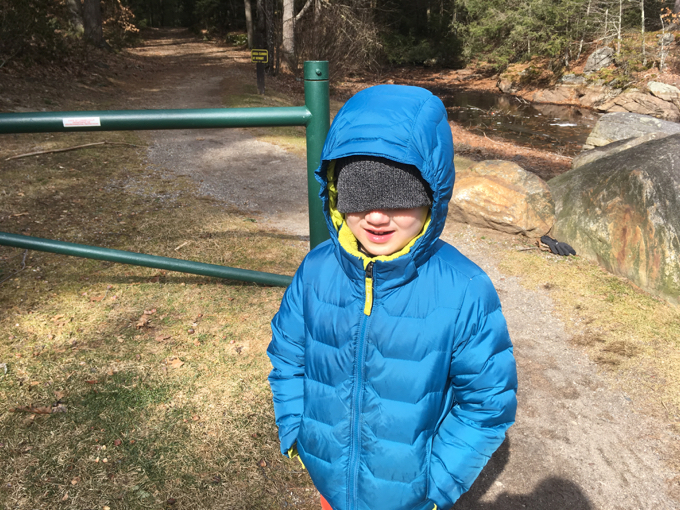 “Papa? I think my eyeballs are frozen in my head.” 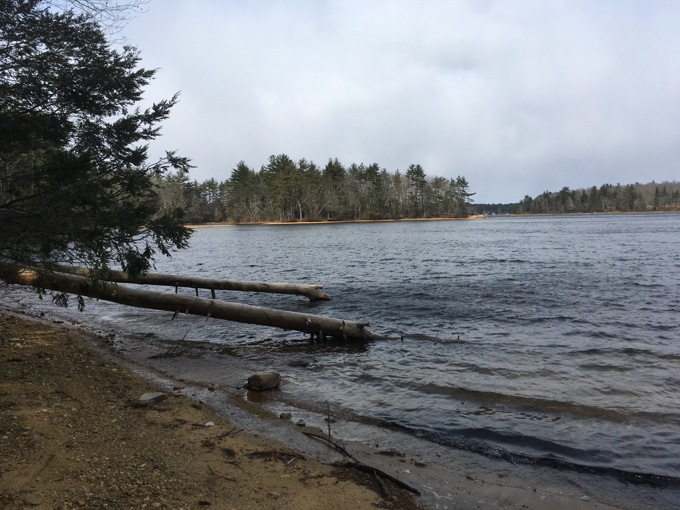