My hometown makes the grade! And not only that, we get one of the fancy stone monuments to boot! 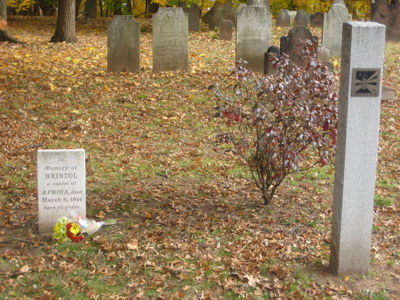 Interred in the Burying Yard is Bristol (ca. 1731-1814), an African kidnapped into slavery before the Revolutionary War, who purchased his freedom and achieved a degree of prosperity and respect unusual for a black man of his time in America. His life is extremely well documented and includes his mission pepers, his will, the house in which he lived as both an enslaved and free person, and his gravestone in the Old Center Burying Yard. 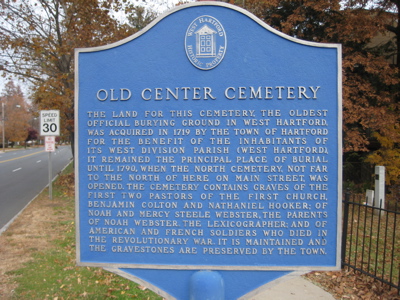 As you can perhaps read above, there are some other local luminaries buried in this very tiny cemetery. This is the oldest official burial ground in town, dating back to 1719. The town’s first two pastors are buried here, as well as Noah Webster’s parents and several Revolutionary War veterans.

I’ll be sure to remember them next time I’m at my dentist’s office, right next door.

Here’s a fun one! I read about the school being added to the Freedom Trail in the Hartford Courant in 2016, but as I write this in 2018, it still does not appear on the Freedom Trail website anywhere. And it may well end up on the Amistad Trail rather than where I’m slotting it on the Concept of Freedom Trail and… you don’t care.

I live in West Hartford and have seen the school go through transition and transformation in my time here. A large percentage of its students are from other countries, as many states in the US now have specialized deaf schools.

There is a museum at the school, which I visited in 2009, and it is notable for many things. First school for the deaf in the US! Possibly the first integrated school accepting black students in the US!

The American School for the Deaf – the first school in the state and, possibly, the nation to educate black students – will now be recognized as a site on the Connecticut Freedom Trail.

“It shows our dedication to the education of all students, as we have done almost for 200 years,” said Brad Moseley, ASD museum coordinator. “It’s not the color of your skin that’s the key thing. Most of the time, when deaf people see other deaf people, they don’t see color.”

Pretty cool, eh? Gary E. Wait, a retired ASD archivist who gave me my tour of the museum, said the school started accepting black students as early as 1825, many of whom came from other New England states.

Also historically significant is the school’s connection to the Amistad trial, he said. In 1839, the slave ship Amistad washed ashore in New London carrying kidnapped Mende Africans. Connecticut officials were unable to communicate with the prisoners, Wait said.
Scrolls from ASD showing pictures and words were brought to the Mende Africans to help them learn English, Moseley said.

“This intervention by ASD’s founders not only allowed for the stories of the Mende Africans to be told, but perhaps allowed for their ultimate freedom, as well,” Bravin wrote. 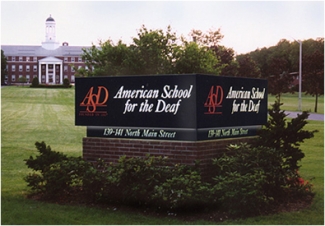 Laurent Clerc (1785-1869), founder of the ASD, is buried at Spring Grove Cemetery in Hartford – another stop on the CT Freedom Trail.