When I started putting together my “Other Great Homemade Ice Cream” list for this website, I figured every stop along the way would be delicious and wonderful. And, for the most part, that has certainly been the case. I mean, homemade ice cream can’t be bad, can it? 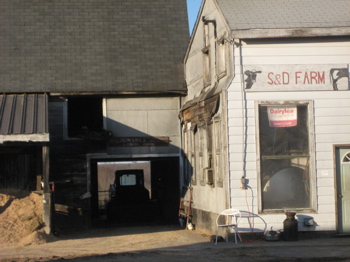 Heck, we even have an ice cream maker and have created some excellent ice cream in our own kitchen.

All this may be giving you the impression that Wildowsky’s offerings weren’t good. And that’s not fair – Damian and I both enjoyed their ice cream – but it’s just not in the top tier. But we’ll get to that in a second…

Wildowsky Dairy began in 1942 in Lisbon by Stanley and Doris Wildowsky. Together with their family of seven children, they processed and delivered milk door to door in Eastern Connecticut.

Now, almost 70 years later, their son and grandson, Stanley and Randy have started the tradition again! We are a 3rd generation dairy farm with a brand new processing plant. We produce a number of types of milk, all of which are hormone and antibiotic-free.

Our ice cream is made on the farm with fresh milk and cream from our cows. We have created our own unique mix that sets our product apart from other ice cream producers. We select all the ingredients that go into Wildowsky ice cream, and oversee each step involved in the process of creating a fantastic product.

Our butter is made from our cows’ cream, and Wildowsky Dairy is the only farmstead butter producer in the state of Connecticut. 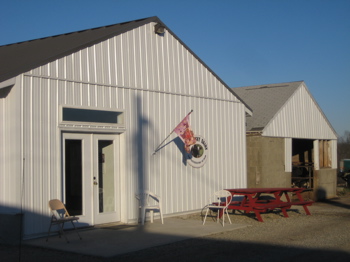 Hm. I think I recall seeing butter at a few other dairy farms we’ve been to, but maybe not. Now that I’m thinking hard about it, yeah, maybe not. But that’s weird… it’s not like butter is hard to make. I think I’ve made it by accident at home a couple times.

Anyway, I appreciate their history and their claims, but there are dozens of other places that make ice cream the old fashioned way. 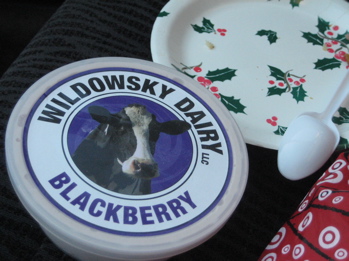 Damian and I stopped by after a random Saturday afternoon road trip to the Burnham-Hibbard House up in Hampton. Even though it was the middle of December, Damian was such a good boy at the museum that I asked him if he wanted a treat to reward his behavior. Of course he said yes, so we traveled down to Lisbon for some ice cream.

(Now, after writing that last paragraph I wondered to myself, “How many people ever spend a December Saturday with their 5-year-old going to old house museums in Hampton followed by ice cream in Lisbon?” I’m guessing zero.) 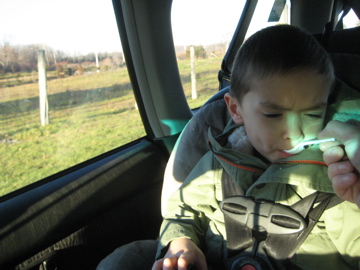 We arrived at the farm (it’s actually right off of I-395) and found the sales area. We were greeted by a – how do I put this politely – a very, very old woman behind the register who just sort of stared at us. I think 99% of December customers are locals stopping in for milk. I say this because two other farmy-looking men came in the very small showroom and everyone greeted each other by first name.

Not many come in looking for ice cream cones. Of course, they weren’t even offering cones or cups or scoops in December and I’m not sure they ever do, judging by the set-up. But Damian kept signing “Eat! Eat! Eeeeat!” so I was in trouble.

We selected a pint of blackberry and my mind raced trying to figure out how I was going to deny my child his promised treat. It was going to be a loooong ride back to West Hartford. Fortunately, one of the hardened looking customers gave me a spoon and some napkins and we were in business.

Once outside, Damian spotted the picnic table and started to sit down as if we were going to enjoy the ice cream sitting outside on a 25 degree day. That’s my boy. Mild tantrum and a few miles of warming up the pint in the car later, I spoon fed him a few bites on the highway and he was satisfied. 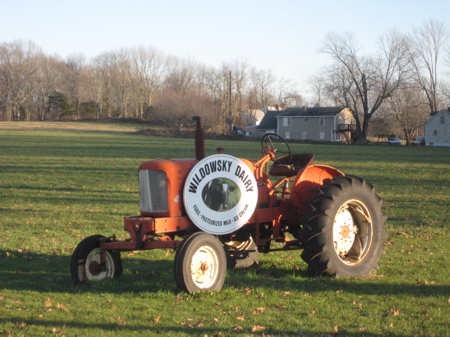 Wildowsky’s ice cream is super creamy and thick and flavorful. But there was something off about the blackberry flavor. They do use some artificial flavoring which is okay, but just not ideal for this type of thing from an independent farm in Lisbon. I’m sure their other flavors are better… but this one missed the mark for me. In fact, Hoang hated it noting it tasted like medicine.

I didn’t think it was that bad, but must point out that it’s still in our freezer untouched from that first day now six weeks later.

Wildowsky Dairy also sells beef and pork products from the farm as well as milk.