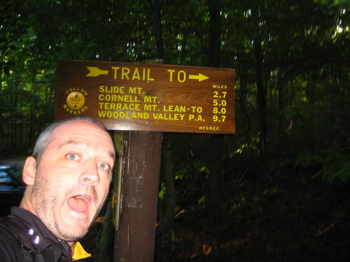 Unlike some climbs on the New England peak-bagging lists, I’ve never been to the Catskills before in my life. They’re all new to me. I find this personally odd because I can get to them between 2.5 and 3 hours meaning I can knock them out via a series of day trips. Of course, efficiency dictates it would make more sense to camp out here and there to save on gas, but life dictates otherwise.

Since this (and the other) hikes aren’t in Connecticut, they won’t get the full CTMQ recapping experience. Hey, if Xenu wanted me to write long explanations of these mountains, He’d have put them in Connecticut. Right? 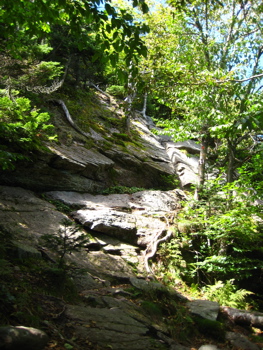 I had the luxury of picking a perfect weather day (upper 50’s to start, about 70 to finish, partly cloudy) and awoke at 4:30, hitting the road at 5 AM. Having a child with Smith-Magenis Syndrome makes this a perfectly normal time to get going! I wasn’t tired at all – in fact, I was rather excited to get going on the Catskills. After all, the Hudson River School of painting that is so prevalent in Connecticut art museums was inspired greatly by the region… So there’s definitely a connection.

I opted to drive the most direct route, along mostly 2 lane roads across northern Connecticut and eastern New York rather than taking the interstates (84 and 87) so far south. Besides the fact that there was no traffic at that time and the route was far more direct, it’s an infinitely prettier route that passes through such cool little towns as Norfolk, North Canaan and Salisbury in Connecticut and Millerton and Rock City in New York.

Besides, I got to cross the funkiest bridge in the land: 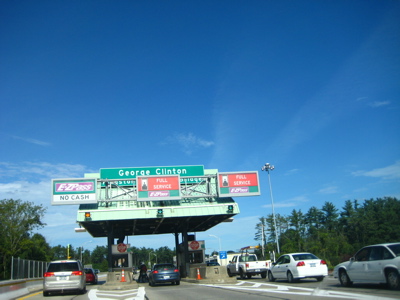 (For more on the George Clinton Kingston-Rhinecliff Bridge, this is a good read.) The view from the bridge takes in some of the eastern Catskills and I knew I was close. 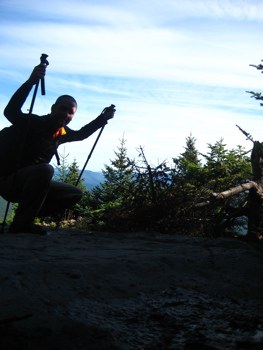 I reached the trailhead along the twisty NY county route 47 at about 7:20 (I drive a little fast on occasion), threw on my pack at hit the trail. I actually signed in the logbook for once – and was reminded that I always should. Mental note: sign in to logbooks.

Slide Mountain is the tallest mountain in the Catskills (why not start at the top?) and one of the only two that top out over 4000 feet. The approach from the west that I was doing is the easier route, but since I was alone and doing an out-and-back hike, that didn’t really matter. I did save maybe two miles (tops) hiking from this direction, however.

The trail was pretty much as expected. It ascended steeply in places and for healthy stretches in others, but it was never too difficult at all. In fact, I flew up the mountain and reached the leveled off section before expected. The whole climb is only 2.8 miles and the last mile or so is quite a pleasant walk through fir and spruce on a nice trail. 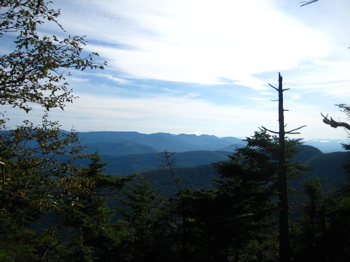 The ceremonial first good view of the day

The true summit isn’t really marked on Slide which is kind of weird. There is a cement block in the middle of the trail; a remnant of an old fire tower. There appeared to be a slightly higher point about 10 feet off the trail to the north and south, so I trudged around the woods a bit in an effort to find some sort of marker. (I later learned that in the Catskills, when a trail summits a mountain there are no markers.)

About 50 yards beyond the true summit is an open rock face area which certainly felt like more of a summit, even though it’s not. And if you know me, you know I don’t care so much about false summits – even if this one was rather nice. 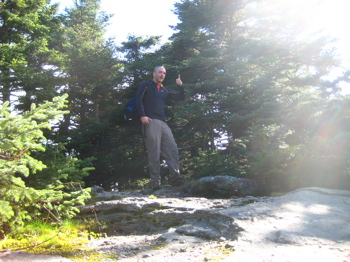 Me on the true summit.

Slide is weird in another way: There really aren’t any views at the summit or even the fake summit. Oh sure, there were beautiful vistas in a few spots on my way up and again on my way down the eastern side, but none on Slide proper. I took my summit shots – my first Catskill 3500! and headed towards Cornell Mountain. 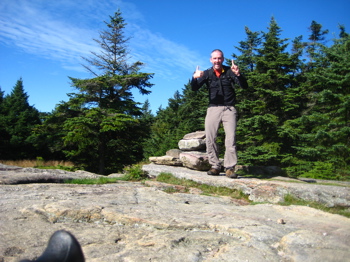 Me on the more popular fake summit

I’d be silly not to include the hike down (and later up) Slide from the other direction. Because it’s an entirely different animal. From the summit of Slide to the lowpoint between mountains is about a 1.3 miles I’d guess. And it’s a tough, tough 1.3 miles! 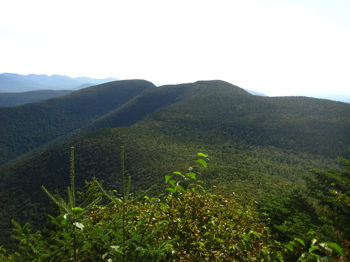 The view north of where I was headed; First Cornell, then Wittenberg

Just north of the fake summit area, there is a plaque in dedication to John Burroughs. He was an American naturalist and essayist important in the evolution of the U.S. conservation movement. According to biographers at the American Memory project at the Library of 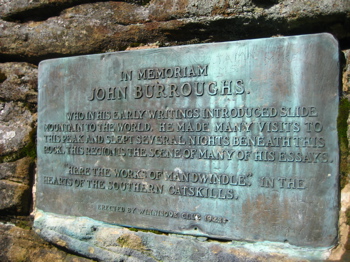 Congress, John Burroughs was the most important practitioner after Thoreau of that especially American literary genre, the nature essay. By the turn of the century he had become a virtual cultural institution in his own right: the Grand Old Man of Nature at a time when the American romance with the idea of nature, and the American conservation movement, had come fully into their own.

Some of the best essays came out of trips back to his native Catskills. In the late 1880s, in the essay “The Heart of the Southern Catskills,” he chronicled an ascent of Slide Mountain, the highest peak of the Catskills range. Speaking of the view from the summit, he wrote: “The works of man dwindle, and the original features of the huge globe come out. Every single object or point is dwarfed; the valley of the 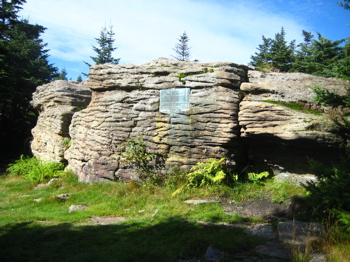 Hudson is only a wrinkle in the earth’s surface. You discover with a feeling of surprise that the great thing is the earth itself, which stretches away on every hand so far beyond your ken.” Some of these words are on the plaque commemorating Burroughs at the mountain’s summit, on a rock outcrop known as Burroughs Ledge. Slide and neighboring Cornell and Wittenberg mountains, which he also climbed, have been collectively named the Burroughs Range. 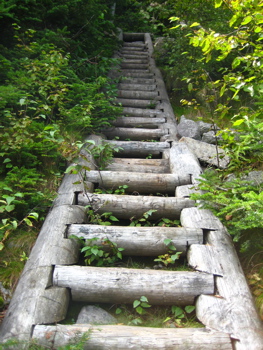 I found that going down the trail was actually more difficult than coming back up it. There are maybe 6 sections that are more-or-less vertical walls that require use of all four limbs – and remember, I’m about 6’3″. I know many people have done this in rain and snow and ice… And my hat is off to them.

At one point, there are a series of ladders to ascend/descend. Going down these things made me a little uneasy, but going back up them was a piece of cake.

Once I was back on top nearing the end of my hike (after summitting Cornell and Wittenberg), I had the pleasure of meeting two guys on top of Slide with massive hiking/climbing resumes. Shamefully, I only remember one’s name was Al. The other has highpointed all 50 states and has completed pretty much every peakbagging list around. 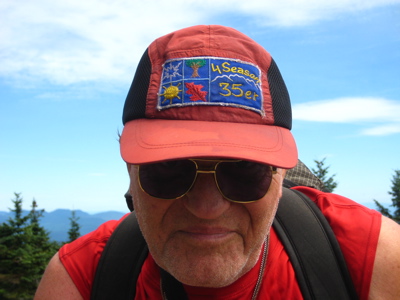 Al. His patch is a homemade deal showing he’s hiked all 35 of the 3500 peaks in all four seasons.

Al was quite a character but we left him at the summit and the unknown guy and I flew down Slide to our cars in no time. It was great hiking with a partner who could match my speed – so aside from wanting to know his name, I want to thank him for that!

My first 3500 Club climb was in the books… With two more to go on this hike. So far, I was digging these mountains.

On to Cornell Mountain